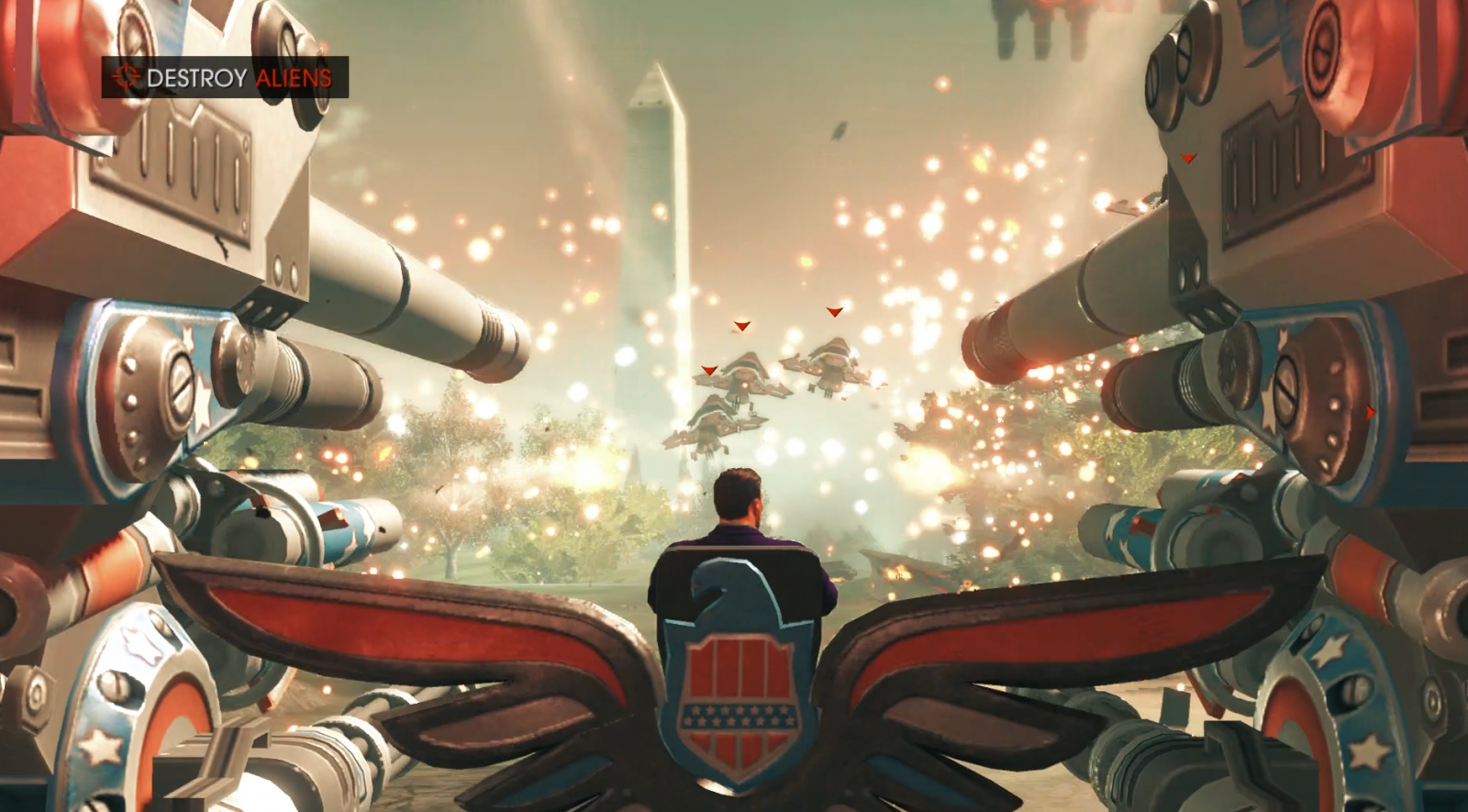 Before I go into detail of how Saints Row: IV Re-elected runs on the Switch, let me shine some light on the story for the unfamiliar. You play as the leader of the Saints and will get to customize your character to your heart’s content, thanks to the in-depth character creator. As the leader of the Saints, you are also the leader of the free world. That’s right, you’re the President of the United States of America, furthermore, cementing that anyone can be the POTUS, but I digress. Living in the White Crib, known to us as the White House, this is where you get to see how Saints Row differs from any other open-world game on the market.

Never taking itself too seriously, you see how the influence of the Saints has changed how the world operates now that you’re in control. You’ve got goons around every corner, guns hidden in the walls, and paintings of, well, things other than old Abe on the walls. Before taking the podium for the first time, you face your first threat as the POTUS, an invading alien threat. And I’m not talking from other countries, but from above. Led by the evil Overlord Zinyak, his forces descend on the White Crib and test your newly elected abilities as the POTUS.

I began my campaign of kicking alien butt and exploring the open-world in handheld mode. Now, there are a few options to take note of before starting. Delving into the options menu, you can turn motion controls on or off which allows you to use the Switch’s motion sensors to move your weapon’s reticle around instead of using the right thumbstick. Personally, I turned it on as it allowed me to perform precise headshots while running and gunning and while driving. Because who doesn’t like to take out a squad of aliens in style while doing a 3-point turn? 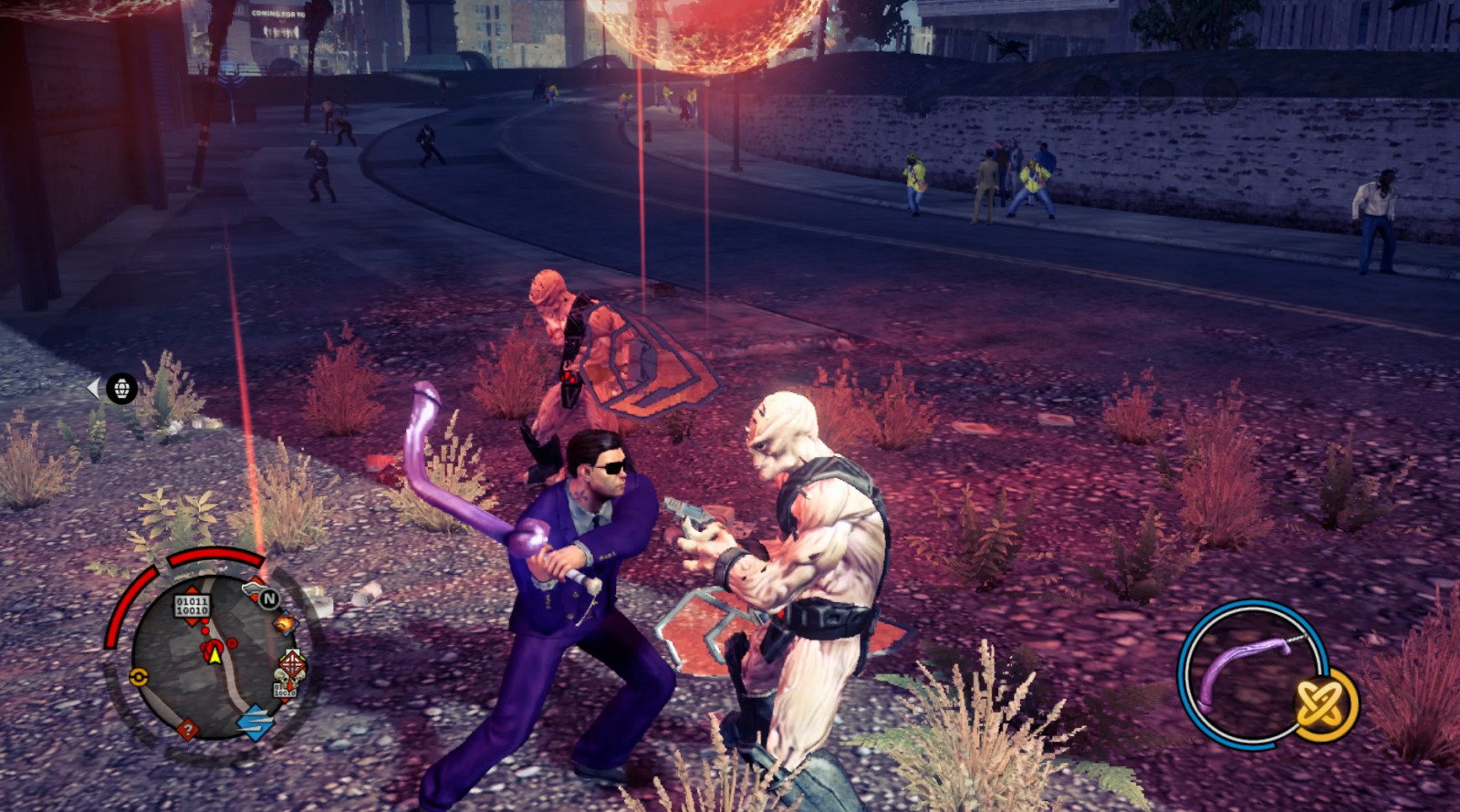 Also, there’s the option to turn dynamic resolution on or off. With the option on and in an enclosed area, the resolution and framerate stay relatively stable. But when out in the open-world and having this option on, you’ll definitely notice visual degradation as the game tries to put performance before visuals. So much so, that ‘staircasing’ on objects (lack of anti-aliasing) makes objects in the world appear blurry and hard to distinguish, but the framerate will be higher and the game will run smoother. Turning dynamic resolution off, the visuals look crisper and objects look pretty good on the LCD screen of the Switch. Framerate is relatively smooth, even in the open-world, until there’s a lot of objects, sprites, or explosions on the screen. I played with the dynamic resolution off, as I preferred cleaner visuals and the framerate dips are shockingly harsh. In docked mode, if you’re playing on a 4K TV, I suggest leaving dynamic resolution on and keeping the higher framerates. The dock and TV should make up for any visual degradation.

After kicking most of the aliens off the White Crib’s front lawn, you come face to face with Zinyak and you’re transported into a simulation world of Steelport city. This is where Re-elected takes off and spreads its controversial wings. The developers never shied away from thinking outside of the box and thinking of ways to bring new experiences in gameplay. You’ll be thrust into different moments of time such as the 50’s and neo-futures, all part of the simulated world. And your character, NPC, music, and environment all take on the newly generated style. 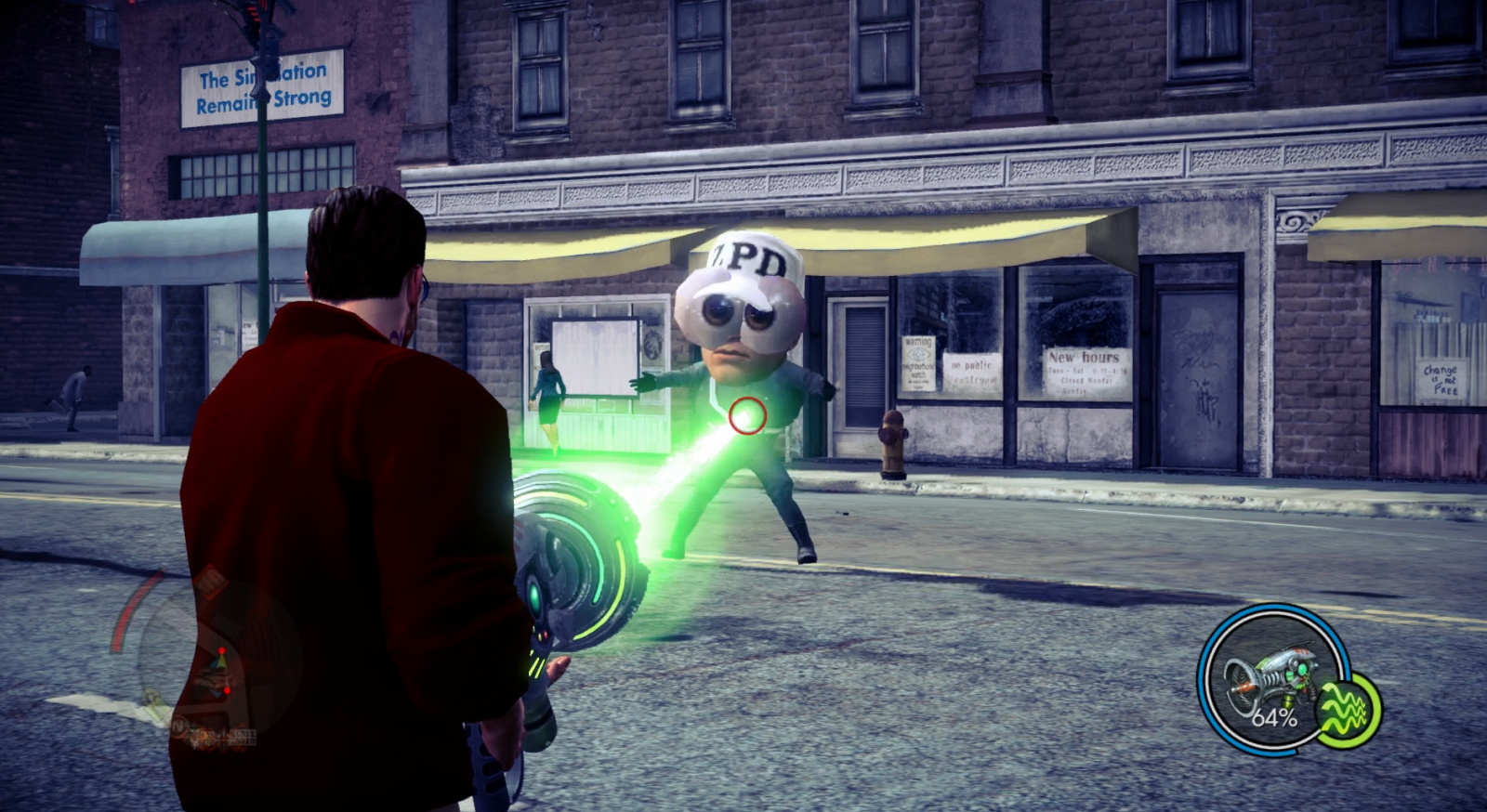 Any gun will do

The weapons in the game not only act as a catalyst for introducing new game mechanics but feel like characters themselves. From shotguns, miniguns, plasma rifles, turrets, cannons that come out of the White Crib’s lawn, and more. Not only are you able to wield weapons that would cause the national guard to be dispatched and a local priest to douse you in holy water, but you have abilities that you will use to gain access to new locations, unlock perks, challenges, and more.

There are two major abilities that you can level up through collecting items in the environment, completing tasks and objectives, and simply progressing in the game. The Upgrades menu allows you to upgrade your health, damage inflicted, your vehicles, combat, and even the Saint’s gang abilities. The other is the Powers abilities that are broken down into two categories, active and passive. The active powers act as offensive abilities and range from blasts, stomp, buffs, and telekinesis. Whereas the passive abilities are more defensive and range from super sprinting, jumping, and shields. I did find that as I leveled up, it was counteractive to certain mechanics that I had developed or are included in the game: why drive and take out enemies when I can super jump, cover more distance, and take out enemies with a single crash down to the ground? But that’s what’s great about the Saints series. It doesn’t limit itself creatively, nor does feel as if it is bound by typical game design philosophy and law.

Saints Row: IV Re-elected on the Switch is a much-welcomed game as it runs amazing in handheld and docked mode, brings a beloved franchise to millions of gamers, and almost feels a bit naughty to have next to my Mario games. With its smooth gunplay, game mechanics that mesh well with the control scheme of the Switch, and ability to cram all of its explosive, expansive, and destructive gameplay into your hand, you cannot pass this game up.

T.K. is a freelance writer, narrative designer, and author. Writing and developing narratives and giving voices to digital world and characters is his passion. As a game writer, QA game analyst, and editor for Gaming Trend, he enjoys being a part of the gaming industry.
Related Articles: Saints Row: IV Re-elected
Share
Tweet
Share
Submit