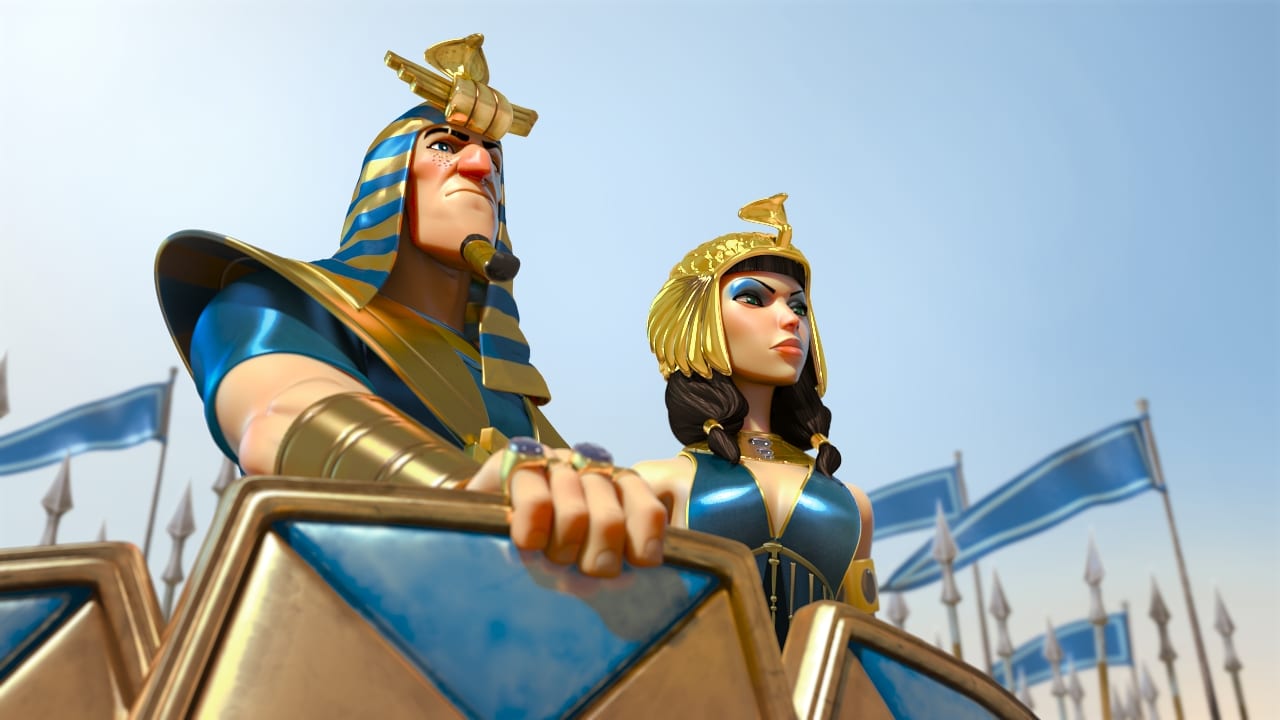 If someone had asked me how you would go about combining the core aspects of a real-time strategy game with that of a massively multiplayer online game, I would have responded with an awkward, dumbfounded facial expression. Clearly I’m not a game designer, that’s probably why I write about games instead of developing them. The guys at Robot Entertainment on the other hand, the studio founded after the original Age of Empires developers handed in their badges, had a much better idea of how to respond and their answer is Age of Empires Online .

Strategy games are one of the oldest genres on the PC, since the days of Dune and Red Alert gamers have been collecting resources, constructing armies, and warring with enemy forces. It’s easy to pinpoint the elements of a strategy game and create a checklist of what to include when developing one. MMOs are a different beast altogether; if you ask a dozen people what they enjoy doing most while playing World of Warcraft, you could very likely receive a dozen completely unique responses. Admirably enough, just about every staple of your typical MMO has been infused into this game about as well as could be expected: Collecting quests, a leveling system, loot, cooperative gameplay, PVP, socializing and the like help make Age of Empires Online a deep and unique experience.

In a typical MMO, you start off by creating a character and tailoring this character to your liking through experience levels and gear. In this game, your character is actually your capital city. Your capital city is where you design the various attributes that will affect the strengths and weaknesses of your forces in battle. It also acts as a quest hub where you meet a variety of people who will ask for your assistance in furthering their goals, much like in an MMO when you run into a town and collect a bunch of quests. There’s no standard mission structure like in other strategy games, there’s a main quest line that advances the primary goals of your civilization and then there’s the side stuff which you do for additional resources and experience.

As your capital city levels up, you receive rewards in the form of gold, experience points, empire points, gear and so on which will expand the capabilities of your capital. For example, gold allows you to buy blueprints to construct different types of buildings which in turn may allow you to produce weapon designs which will strengthen certain types of units during a quest.

The sheer level of options you have at your disposal to build up your empire is astounding and attempting to cover all of them in a single review would make it an insurmountable article to read. The bottom line is that when it comes to depth, Age of Empires Online is way out there. The good news is, as complex a game as it sounds, it is brilliantly simple to learn thanks the intuitive nature of the quests which gradually acclimate you to the intricacies of the gameplay rather than dumping it on your head and shoving you out the door.

The user interface is a pleasure to navigate, the art assets used throughout the game take on a not-so-serious, somewhat cartoony style that I feel fits the game well. Too many games out there focus on cutting-edge, realistic 3D graphics and the result is often a lack of imagitive visuals and a stuttering framerate. Thanks to a style of graphics which is more focused on the quality of its art rather than pushing polygons, the world of AoEO is bright and beautiful, the units are all uniquely identifiable on the battlefield and are fun to watch as they hack away at each other. The music and sound effects are yet another core area that the game excels in, with sweeping melodies that fit the culture of the particular civilization you are commanding and a diverse range of appealing sound effects that will continue to ring in your ears hours after you’ve stopped playing.

Primarily what you’ll be doing in AoEO is completing quests which involve your standard strategy game affair; raising an army strong enough to defeat your enemies. Many missions will stray from this basic quest structure and present creative mission objectives like escorting important people from one part of the map to another or accumulating an arbitrary number of resources. While the missions are mostly fun and creative, especially if you are playing cooperatively with another person which is almost always an option, they can become repetitive. This has always been an issue I’ve had with strategy games as eventually at some point in the campaign I feel like I’ve done the same mission multiple times already. Starcraft 2 did an incredible job keeping its campaign feeling fresh and is probably the epitome of how you keep a player engaged in a campaign. AoEO’s quests never quite reach this level of excellence, however, there are a wealth of periphery activities to help mitigate the issue.

All strategy games have some sort of multiplayer component, and seeing as how this game tailors itself around the model of an MMO, it labels its multiplayer as PVP (player-vs.-player). Participating in PVP is essentially standard affair. Since each person’s civilization is custom tailored it’s not as if two players going 1 on 1, each with their Greek Civilization, you’ll see the same units coming off the assembly line. So it’s actually pretty interesting battling it with other people and seeing how their civilization differs from yours. There’s ranked and unranked matches which will ultimately separate the serious players from the casual, participating in ranked matches requires your capital city be a certain level, that you have certain paid content, etc.

There’s a few other multiplayer modes as well, such as Defense of Crete which is similar to Horde mode in Gears of War or Firefight in Halo Reach where you and multiple other players have to defend against tiered waves of enemies. The multiplayer in AoEO should prove to be the game’s strongest feature in the long-run as eventually your capital city will max out in levels and you’ll have completed all the quests.

Age of Empires Online is a unique endeavor that I truly hope more developers and publishers are willing to venture towards. In this day and age, being connected through social gateways and having the ability to share your experiences with others is rapidly transitioning from commodity to necessity, and not only in the gaming sphere. Robot Entertainment has made a valiant attempt at thrusting the Age of Empires series into a modern social gaming experience and they’ve certainly succeeded in that, the only problem is the core experience as a strategy game may prove not to hold up as well. I’ve had a wonderful time with AoEO since I started playing the game during beta to post-launch, my biggest complaint is that I’ve found myself feeling a sense of monotony in the gameplay. Also, since the price of admission is free, there’s a higher number of rude people cluttering up the chatrooms than there would be a normal retail game. Eventually I built up a network of people I enjoyed playing with and they became not only people I could play with, but trade and barter with as well.

So who should play Age of Empires Online? That’s easy, everyone should. It’s free, what do you have to lose from trying it out? Is it worth it to invest in the premium content, which adds more content and features creating a more in-depth experience? I personally believe so, especially if you enjoy strategy games. If you’re coming off of a traditional MMO like City of Heroes, Lord of the Rings Online, or World of Warcraft, I wouldn’t come to AoEO expecting a similar experience because it’s not. Strategy is the entree and MMO are the sides here. I’ve enjoyed the dozens of hours I’ve put into the game, the biggest question is if it would hold up for dozens of hours more, and my answer to that is I’ll unlikely play in any long-term sense, it just hasn’t held my interest enough to encourage me to do so. 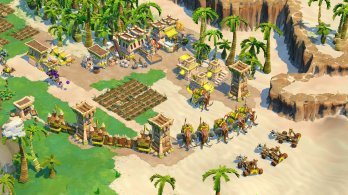 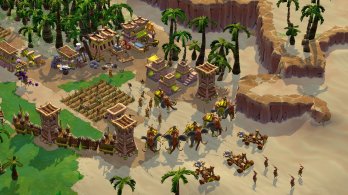 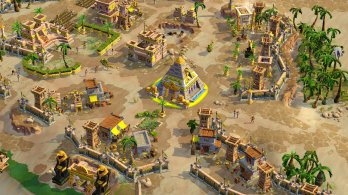 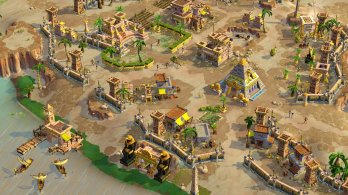 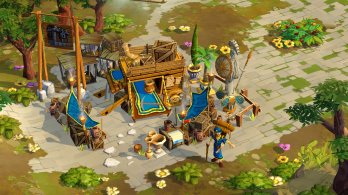 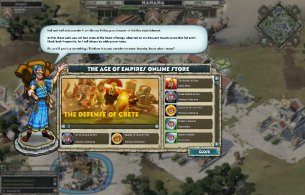 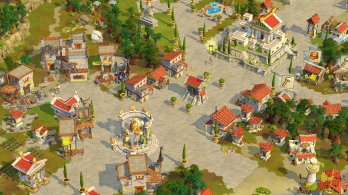 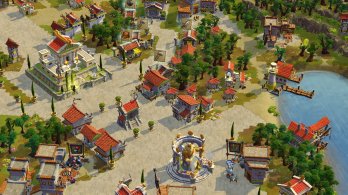 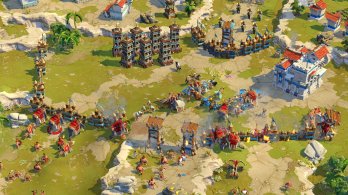 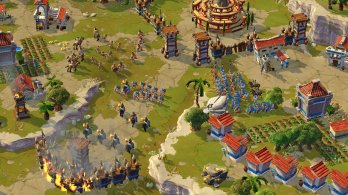 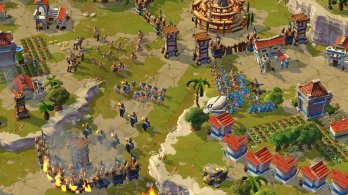 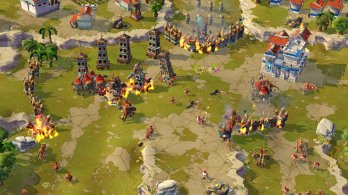 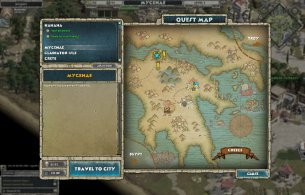 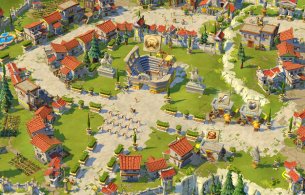 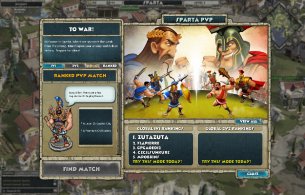 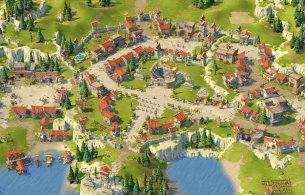