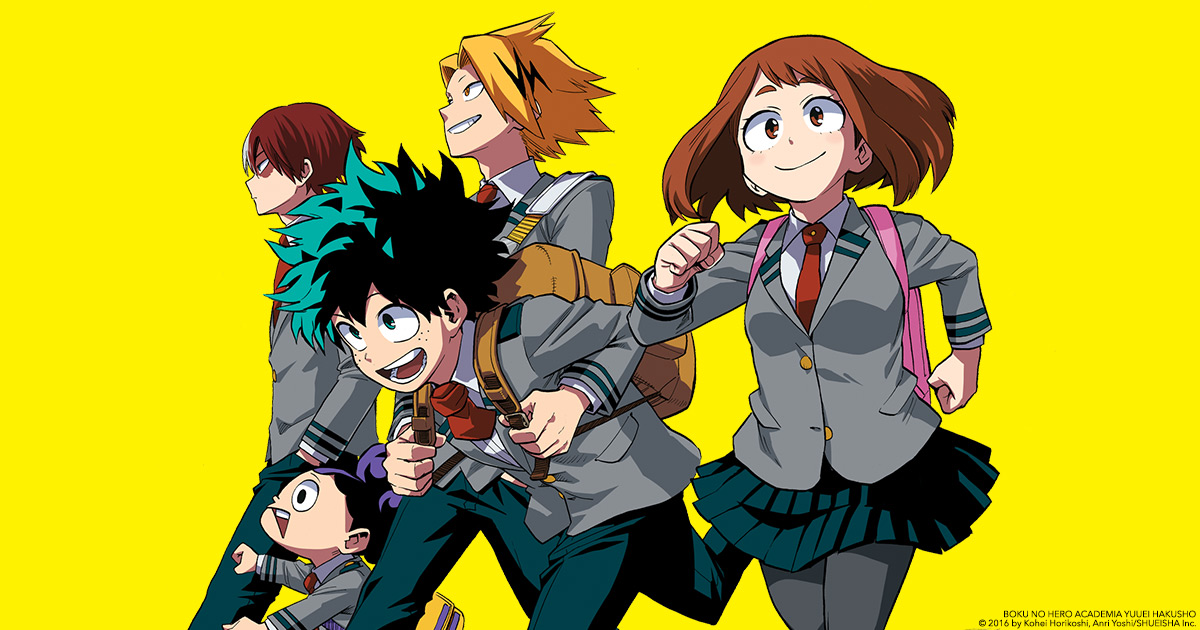 I really love reading manga, but I’ve taken a liking to light novels as of late. From sporadically checking up on the Haruhi Suzumiya series to reading recent releases like The Disappearance of Hatsune Miku and The Rising of the Shield Hero, I do appreciate how simple and digestible the format is. A few light novels have taken to expanding the world of anime, and the first volume of My Hero Academia: School Briefs develops the lives of Class 1-A after the action has settled down. While I can only recommend it to existing fans of the My Hero Academia anime or manga, it’s still a serviceable read. 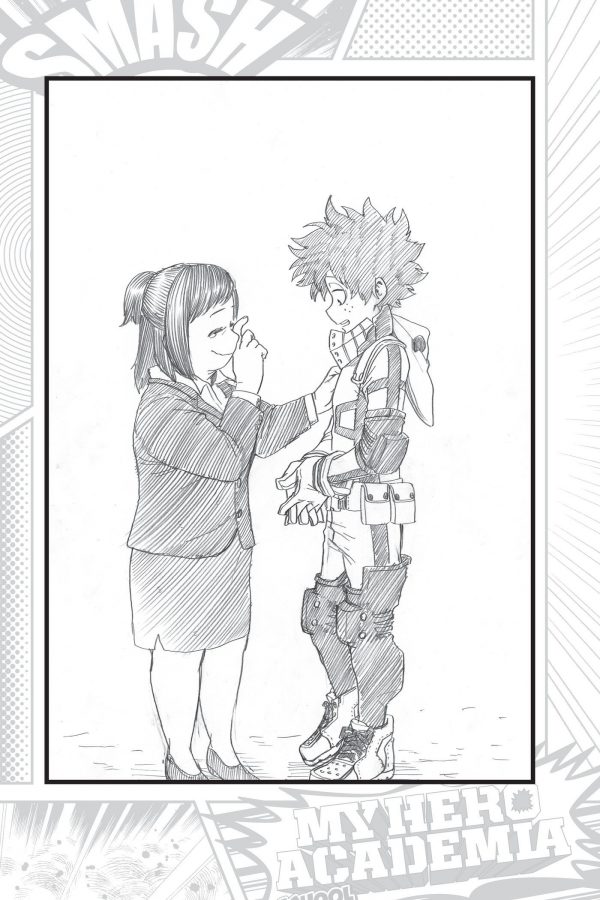 Inko and her son are so pure.

My Hero Academia: School Briefs is a selection of stories focusing on certain members of Class 1-A, with the upcoming Parent’s Day being the framing device linking them together. For those uninitiated, the world of My Hero Academia centers around protagonist Izuku Midoriya, a teenage boy who longs to get a quirk (this world’s version of superpowers) in order to become a superhero. After meeting his childhood role model All Might, he gets his wish and aims to become the best superhero in the world. In order to do this, he registers at U.A. High School where he meets a motley crew of heroes-in-training.

While the main manga and anime focuses mostly on Midoriya and other central characters, School Briefs opts to take a different approach and instead highlights the lives of the supporting cast. This story takes place before the third season of the anime (which also means before the All For One arc), so it’s more of a breather than anything else. We do get to see Midoriya in the prologue and fifth story, but the volume focuses on the other cast members in four additional tales.

Shoto Todoroki visits his mother in the hospital to invite her to Parent’s Day, Tenya Iida goes to a theme park (accompanied by Fumikage Tokoyami, Minoru Mineta, and Denki Kaminari), and Ochaco Uraraka heads to the supermarket with Momo Yaoyorozu and Tsuyu Asui. Even the teachers get some spotlight when they plan a special event for Parent’s Day. The emphasis on important characters that don’t get too much screentime compared to Midoriya or Bakugo was appreciated, and I did enjoy getting to see what some other cast members were up to.

These stories excel in their slice-of-life moments, making the mundane fun to read. Iida’s story, for example, begins with the four guys in a theme park (with the accompanying drawing showing them with adorable animal ears). Iida and Tokoyami split off to get some apple pie and ride some attractions, which highlights the pair’s comical seriousness in situations like this. Kaminari and Mineta meanwhile try and pick up some girls (unsuccessfully), which ends up being cringe fuel but also awkwardly funny (and is an oddly in-character moment for the two). Uraraka’s story is fine as well, as it mentions her tendency to be frugal to the point of using her friends to buy multiple packs of mochi on sale (limit one per person), and ending with a panty chase. (That last sentence was bizarre, but it’s really not what it looks like.) These supplementary anecdotes can be hilarious and a great payoff for those keeping up with the series. 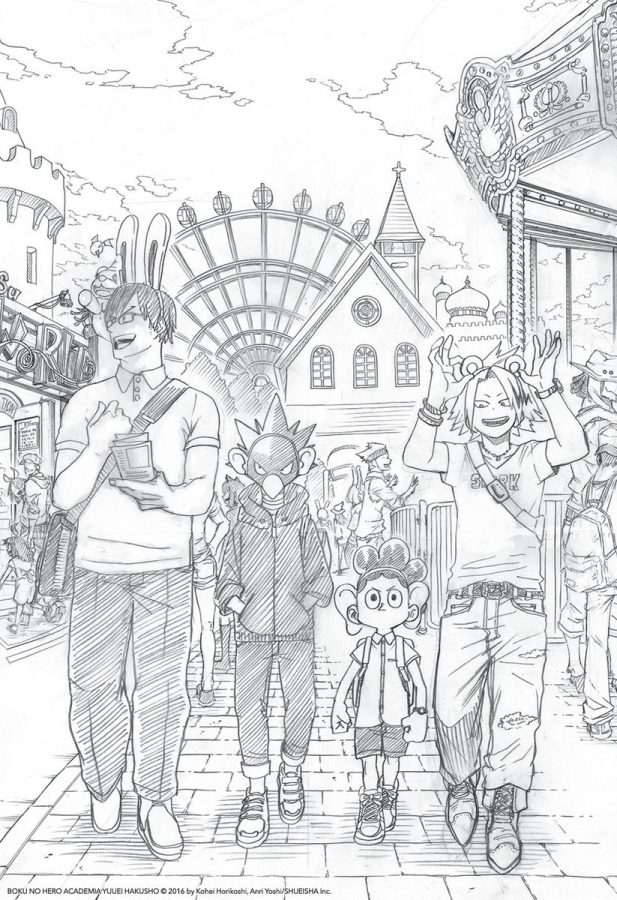 However, as a standalone product, this falters somewhat just due to the sheer amount of characters in Class 1-A. This isn’t necessarily a problem, but because of how many other members are in the class, you’ll barely get to see the rest of the members. In fact, the volume barely acknowledges the others, and they’ll get a sentence introduction with a cliffsnotes version of their quirk (if you’re lucky). This is rather vital due to the fact that all the students have to team up in the final story; because you only develop a quarter of the cast, the appearance of the rest of the members feels contrived and uninteresting. I feel like there could have been a better way to wrap it all up just using the characters represented in the previous chapters. It all wraps up suddenly, and the payoff isn’t satisfying at all.

In addition to this, the characterization for some people is off. Todoroki is seen having major resentment towards his father Endeavor, which was a main character trait in his introduction. However, at this point in the series, he’s more amicable towards Endeavor, so him cursing out his dad when visiting his mother is a bit jarring. (This is evident much later in the volume when Endeavor actually behaves like a doting father.) All Might is rather dorky in his appearances, which does sync up with his plot relevance in My Hero Academia: Vigilantes, but here it comes off as sudden and slightly off. The story with the teachers talking among themselves is also kind of weird, as it frames them as hypothetical villains in a random scenario. While this banter is expected from familiar peers, the conversations come off as uncharacteristically malicious.

The first outing of My Hero Academia: School Briefs is one that’s full of lighthearted tales and supplement the main series nicely. However, with some very out-of-character moments and a weak final story, this volume may only appeal to fans invested in the series already.

Elisha Deogracias is an aspiring accountant by day, freelance writer by night. Before writing for Gaming Trend, he had a small gig on the now defunct Examiner. When not being a third wheel with his best friends on dates or yearning for some closure on Pushing Daisies, he's busy catching up on shonen manga and wacky rhythm games. Mains R.O.B. in Smash. Still doesn't know if he's a kid or a squid.
Related Articles: Beyond the Page, My Hero Academia: School Briefs Volume 1
Share
Tweet
Share
Submit