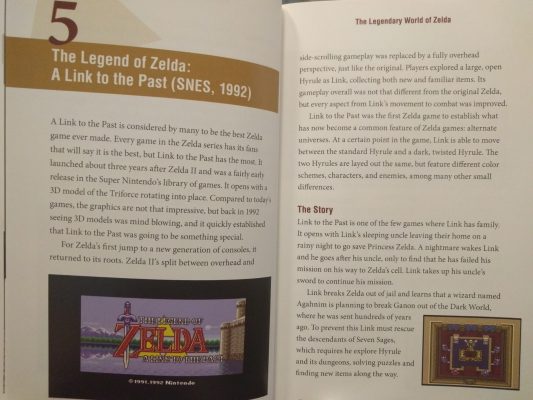 Spanning four decades and selling through over 75 million copies, The Legend of Zelda is largely considered to be one of the most beloved franchises. I called The Legend of Zelda: Breath of the Wild the best Zelda game of all time in my review, assigning a perfect score. As we celebrate the franchise renewed, Author Kyle Hilliard tackles the daunting task of encapsulating the last 30 years of Zelda in his new book The Legendary World of Zelda: The Unauthorized Guide. As someone who grew up battling Ganon in all of his forms, I was excited to see how Mr. Hilliard would tackle the world of Hyrule.

At 144 pages (in a 5” x 8” format), Hillard’s softcover book works diligently to capture the story of each Zelda game, including the handheld adventures on the Gameboy, DS, and 3DS. The first 100 pages are devoted to the storylines, items, and settings for each title, devoting five to six pages when peppered with full-color pictures. If you missed out on any of these titles, Hilliard’s descriptions do a great job of bringing you up to speed on where it fits in the overall canon. Given the 30 year history of the series, it’s also a good reminder of just how often Nintendo has taken serious risks with one of their most successful franchises.

One highlight of the book comes in the latter half — the comprehensive timeline. Hillard tackles this oft-debated subject with a dash of the official answer from Nintendo, peppered with a brief description of the setting for that game. Some games don’t get a great deal of attention in this section, and a few practically none, but the preceding chapters cover each in depth regardless. It would have been nice to hear the author’s thoughts on, as an example, some of the fan-fueled theories on Minish Cap and the somewhat dark outcome.

My favorite section is Chapter 20 (23 in total) — the spinoffs. I was amazed at Hilliard’s restraint while talking about Link: The Faces of Evil, Zelda: The Wand of Gamelon, and Zelda’s Adventure for the Philips CDi system. These three games are universally accepted as the most cringeworthy examples of the industry so it was easy to expect a thorough evisceration of these offshoots, but that’s not featured here. Hilliard once again sticks to setting and story, though admittedly far more abbreviated than sections devoted to mainstream titles. If you’d like to see why, allow me to include 19 minutes of some of the worst writing and animation ever committed to digital media:

Also covered in this section are better received offshoots Hyrule Warriors, Link’s Crossbow Training, My Nintendo Picross: The Legend of Zelda: Twilight Princess, and shudder-inducing Freshly-Picked Tingle’s Rosy Rupeeland. Hilliard also includes far-less-known Japanese only releases such as BS Zelda no Densetsu. Naturally there is a section on Link’s many guest appearances including Soul Calibur II (exclusive to the Gamecube version, as seen here), Mario Kart 8, and five fan-favorite forays into the world of Super Smash Bros. It’s a nice trip down memory lane, reminding me of a few appearances I’d forgotten.

Some offshoots I’d never heard of before.

If you are a child of the 80’s, you probably also remember The Legend of Zelda TV Show and Captain N: The Game Master. The Legend of Zelda TV Show was on par with the CDi games (“Well excuuuuuse me, Princess”), so it didn’t last beyond a single season, whereas the more cameo-laden Captain N endured for three adventure-filled years. Hilliard’s book touches on them briefly, as well as Link’s foray into graphic novels, Choose Your Own Adventure books, and more recent merchandise such as Amiibos. Some of the highest quality and largest pictures in The Legendary World of Zelda are of the Nendoroid and Figma figures.

These figures are fantastic.

The last two chapters of The Legendary World of Zelda covers the innumerable amount of games that have been influenced by the series, including Okami and the Darksiders titles, and a quick look at how the first 30 years have lead up to The Legend of Zelda: Breath of the Wild. Hilliard’s analysis of the mechanics that make up Zelda games (including how Breath of the Wild is a return to the 8-bit open-world origins of the series) is spot on. The section on why Miyamoto named the main character Link is a simple reminder of why we all fell in love with these games in the first place.

Largely due to the time it takes to get a book to print, the Breath of the Wild chapter is a little lighter than you might expect. Moreso when you consider the sheer volume of discoverable content awaiting you in this reimagined Hyrule. If I have one complaint, it’d be this very, very small one.

The Legendary World of Zelda

At just $9.99, this paperback book is a wealth of Zelda knowledge covering the last 30 years of amazing stories. It would have been nice to see Hilliard tackle a large-format book with more room to breathe, or if he had the opportunity to jam in more Breath of the Wild goodness, but what’s on display here is an easy recommendation for any Zelda fan, old or new.

Ron Burke is the Editor in Chief for Gaming Trend. Currently living in Fort Worth, Texas, Ron is an old-school gamer who enjoys CRPGs, action/adventure, platformers, music games, and has recently gotten into tabletop gaming. Ron is also a fourth degree black belt, with a Master's rank in Matsumura Seito Shōrin-ryū, Moo Duk Kwan Tang Soo Do, Universal Tang Soo Do Alliance, and International Tang Soo Do Federation. He also holds ranks in several other styles in his search to be a well-rounded fighter. Ron has been married to Gaming Trend Editor, Laura Burke, for 21 years. They have three dogs - Pazuzu (Irish Terrier), Atë, and Calliope (both Australian Kelpie/Pit Bull mixes).
Related Articles: The Legendary World of Zelda
Share
Tweet
Share
Submit