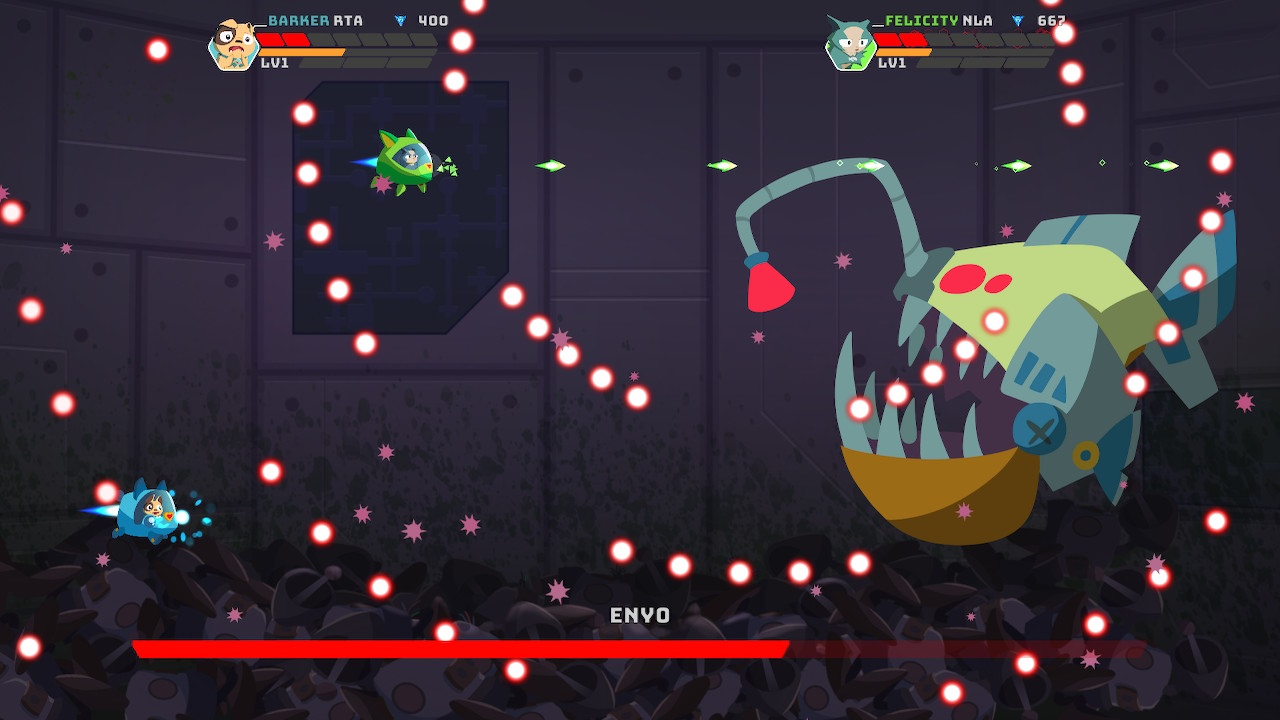 Humans will do anything for their pets, but would their pets do the same for them? In B.ARK,  players get to take the reins of stranded pets as they attempt to rescue their humans and put an end to a growing robot threat. 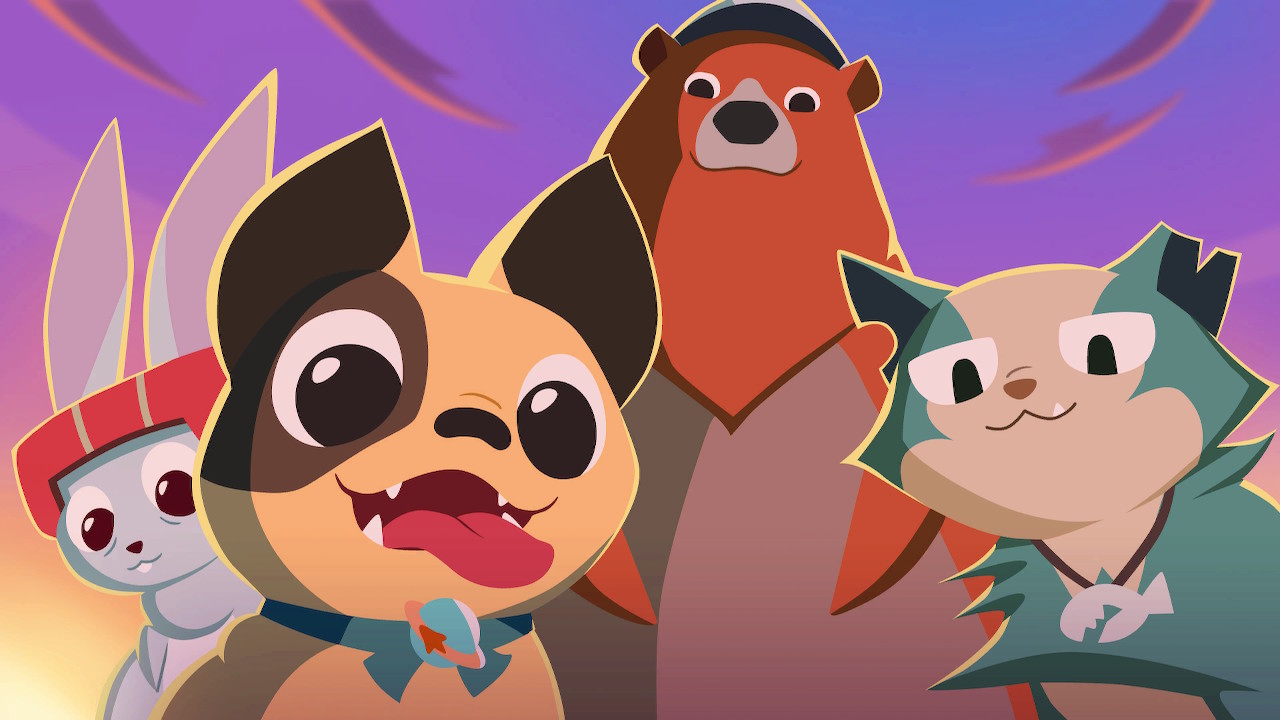 Earth is being taken over by robots, referred to as The Dark Tide, and their leader Chog. Unable to win the war, the humans of B.ARK, which stands for Bio-Interstellar Ark, and their animals decide to launch into space in hopes of finding safer pastures. Unfortunately, their take off does not go as planned when a massive robot comes after the ship, forcing the humans to disengage the animal’s pod in hopes of saving their beloved pets. The animals watch helplessly as the robots capture their humans. The animals’ pod drifts for a while before running into a large space station commandeered by Captain Salty and his crew, who rescue them and prepare them to fight back against the growing threat of The Dark Tide.

After a brief, but surprisingly heart wrenching opening cinematic, you are thrust into the player select screen. Here you can choose between the game’s loveable cast of stranded animals, including a brave bear named Lucio, a nervous bunny named Marv, a feisty cat named Felicity, and an eternally optimistic dog named Barker. Gameplay isn’t really affected by your choice of character, just cosmetic features such as the color of your ship. 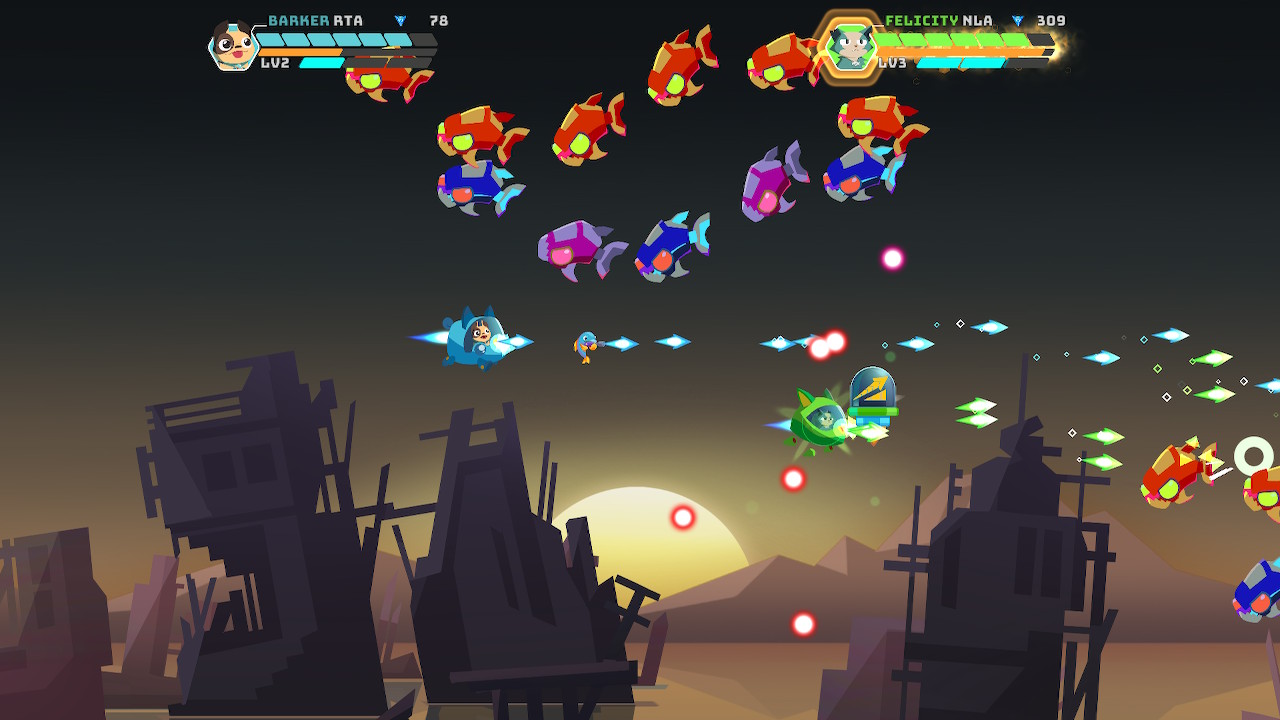 You can choose to tackle the game single player, or invite up to three friends over for some couch co-op. That said, let me be clear: B.ARK is a game meant to be played co-op. Sure, you can tackle the challenge solo, but I feel a lot of the fun stems from cooperation and the back and forth of trying to survive the chaotic missions while rescuing your fellow teammates, and the competition to gain the most enemy kills and most plutonium gathered to win the coveted number one spot after completion of a level.

At its heart B.ARK is a simple shooter. You can move up, down, left, and right, while the screen continuously pushes you onward. There is no time to rest, no time to catch your bearings, only time to annihilate all that stands in your path. And boy, do a lot of enemies stand in your path. The game begins slowly enough, allowing you to learn the ropes, before launching you into a far more chaotic experience than I had expected. 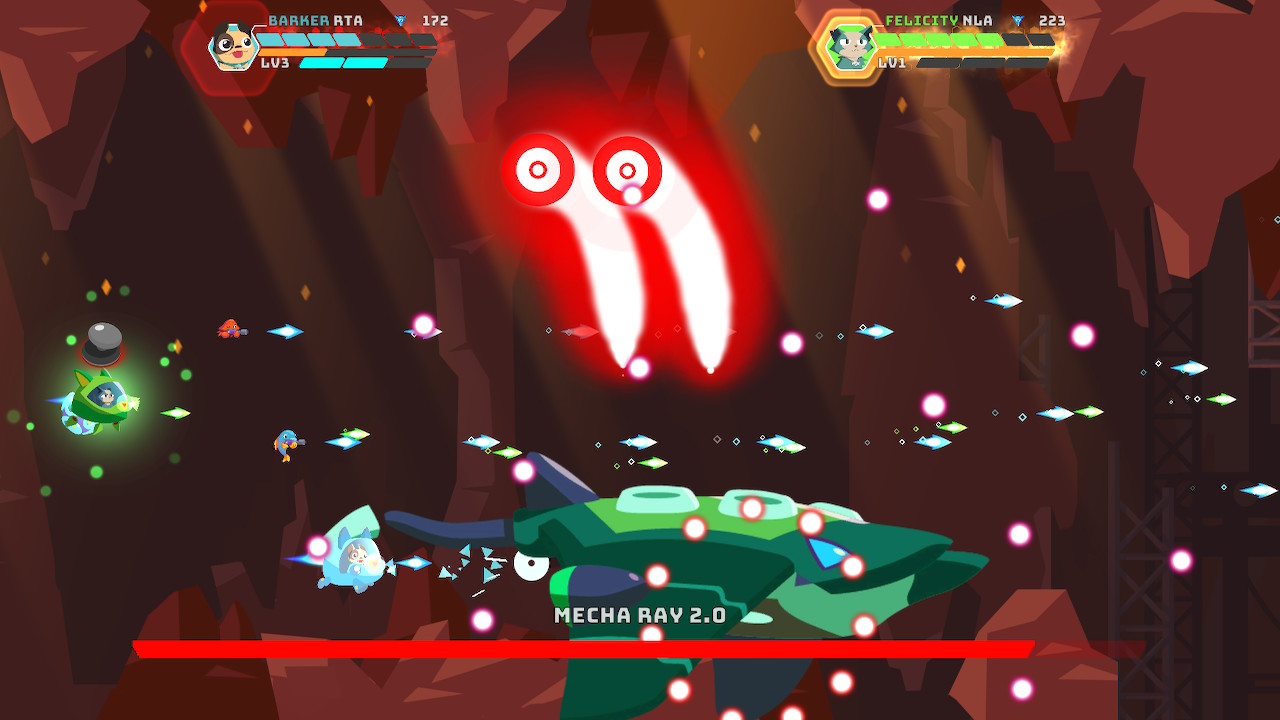 Levels feature a ton of enemies, with the screen constantly filled with obstacles to dodge, enemies to destroy, and weapons spouting off in all directions. Players unfortunately do not have a wide range of attacks to counter all this chaos. You can hold a button in to shoot continuously, or release the button for a few seconds to build up to a bigger blast. After a while a special meter gauge will fill allowing you to unleash a massively powerful attack, great for gaining the upper hand in boss fights. You are also equipped with a dash which can be used to dodge attacks and avoid harm. That’s it. Frustratingly, you can only shoot to the right, which almost feels unfair when many enemies, including bosses, will fly to the left side of the screen and attack you from there, and all you can do is dodge their attacks and wait for them to move to another location.  Thankfully, this is rarely an issue with common enemies as levels move quickly and any enemy to your left will quickly disappear off screen, but bosses tend to use this tactic more often than they should.

You will die — a lot. Even on lower difficulty settings. Thankfully, when working as a team, death is not permanent. Only one teammate needs to survive in order to avoid the dreaded game over screen. There are two ways to survive a game over; when a player dies a fellow teammate can rescue them, which allows the caught player to serve as a 2nd gun on that teammates ship while their health regenerates, eventually thrusting them — ship and all — back into the fray. Or if the player is not caught by a teammate then a timer will begin, counting down the seconds until that player can respawn. The penalty for a player’s first death is not much, but once you have died multiple times the counter will rise, forcing your teammates to survive much longer without you. 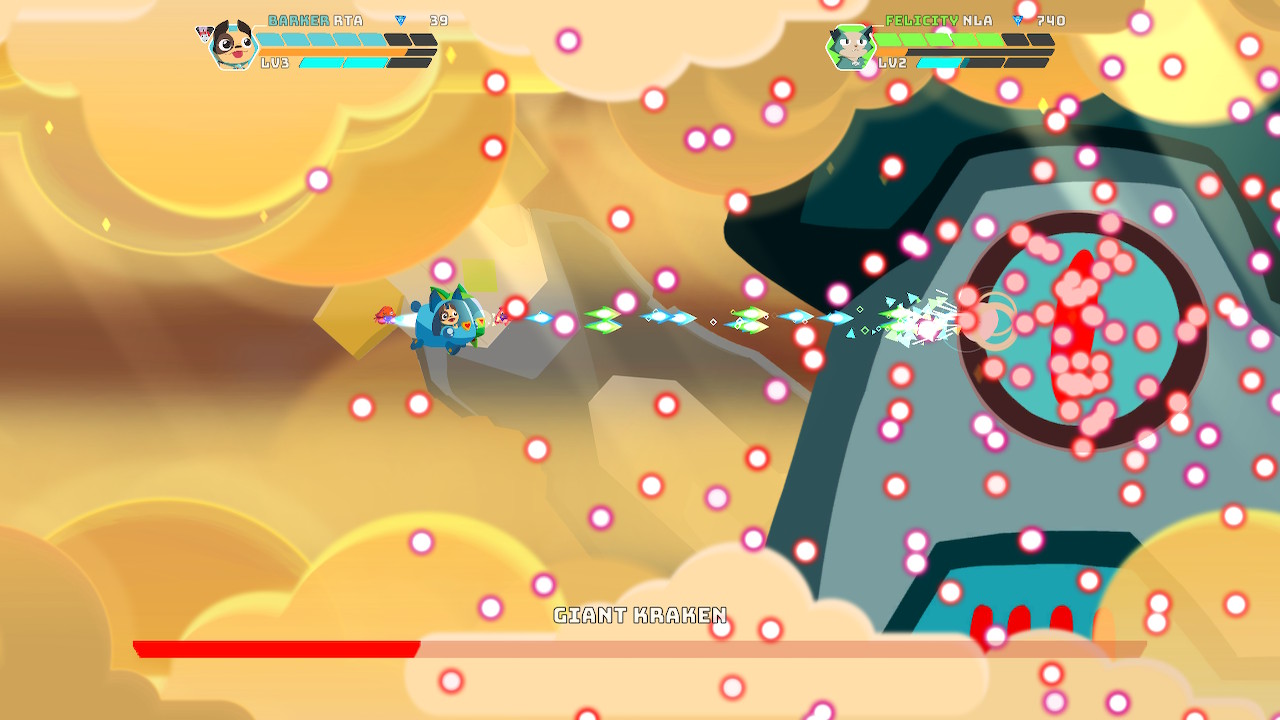 There are three difficulty settings for each level: normal, hard, and insane. So for those who love torture, or just a good challenge, you can grab three friends and attempt to complete the game on the insane difficulty, adding some replayability. Each level features an end-of-level score card where players are compared and ranked based on the number of enemies defeated, the number of plutonium collected, and the number of rescues they performed. It’s a small feature with no value aside from bragging rights, but still a nice addition, especially for competitive friends. Each level also holds a memory that can be unlocked, which tells the story of each crew member and how they came to be involved with B.ARK.

These memories are cute and are told through on screen text and drawings, rather than full fledged cutscenes. Still, they serve as a nice change of pace from the chaos and help to flesh out the story a bit more – even if there’s not much to flesh out in a space shooter involving pets fighting to save the world. Aside from the opening cutscene, there is no spoken dialogue, which is fine except for the fact that a ton of back and forth chatters occurs between the animals during levels via on screen text, which is almost impossible to read if you plan on staying alive. I would have liked the dialogue to either be spoken or at least reserved for moments after bosses, or before and after a level, so I could have kept up with what they were saying. Still, none of it is necessary to progressing as that merely involves staying alive and shooting everything in sight. 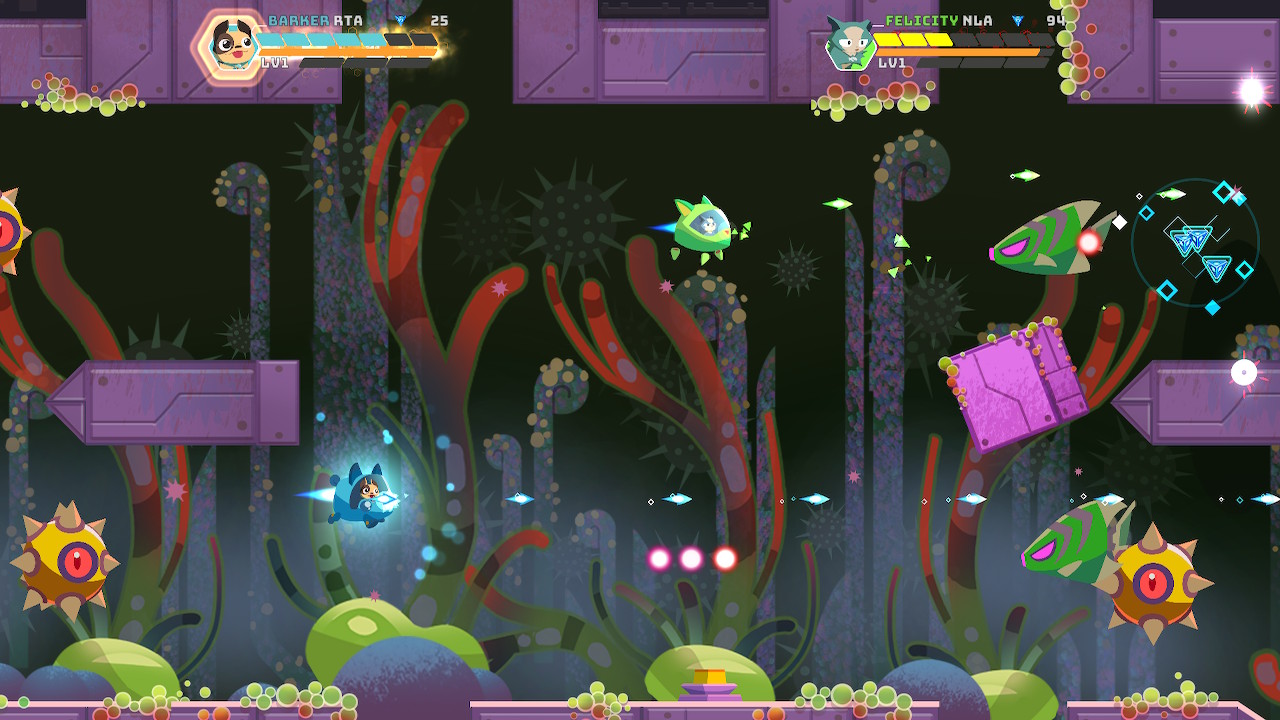 Levels are not particularly long, but do feature two mini-bosses and a main boss each, allowing the levels to constantly be broken up between short stretches of all out chaos against an onslaught of enemies, and a boss battle. I only wish the boss battles had a bit more variety, as most consist of you hoping you have a special attack built up, dashing to dodge the bosses’ incredibly wide ranging attacks, and then unleashing everything you have at them for the few seconds they are in range. Each boss serves as a checkpoint, so if you do encounter a game over screen, you never have to replay too much of a level.

Unfortunately, B.ARK is rather short, which makes it great for co-op nights, but may hurt its replayability. There are only 6 core levels, with a 7th level unlocking after completion. The 7th level serves as a boss rush/survival mode of sorts, forcing players to restart from the beginning after each death rather than providing check points. The boss order is also randomized, effectively making sure you are never fully prepared for which boss you are about to meet.

B.ARK is a fun and incredibly chaotic shooter, one best played with friends. The levels move quickly and throw a variety of enemies and bosses at you, despite some of the bosses feeling a bit repetitive. Still, the lovable cast of characters, the quirky concept, the ability to rescue your teammates, and the push for players to be competitive all fuse together to create a fun, if short-lived experience that I found well worth tackling over a night with friends.

Richard Allen is a freelance writer and contributing editor for various publications. When not writing for Gaming Trend you can find him covering theatre for Broadway World, movies and TV for Fandomize, or working on original stories. An avid retro gamer, he is overly obsessed with Dragon's Lair. Chat with him via @thricetheartist on Twitter and @richardallenwrites on Facebook and Instagram.
Related Articles: B.ARK
Share
Tweet
Share
Submit