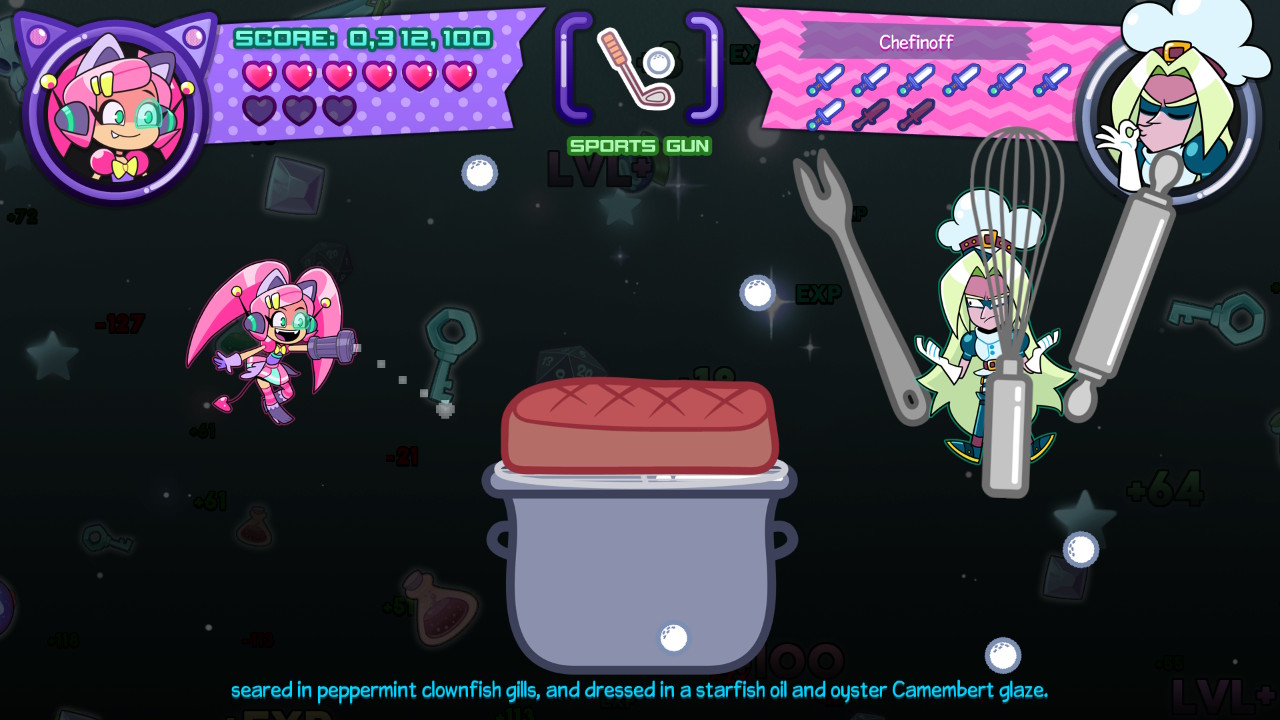 While this year may have been different, I usually love when developers and publishers dole out their April Fools’ Day pranks. Whether it be impossibly cool concepts or just duds that are made to ridicule, it’s always fun to have a laugh. What’s even better than that is when a game actually gets released because of this. Enter Wayforward’s Cat Girl Without Salad: Amuse-Bouche, which was conceived in 2016 after mockups during a 2013 April Fools’ presentation. While exclusive to the Humble Bundle for four years, the game finally made its way to the Switch yesterday, and while it’s too short to make a lasting impact, it has the foundations of a solid and hilarious joke of a game. 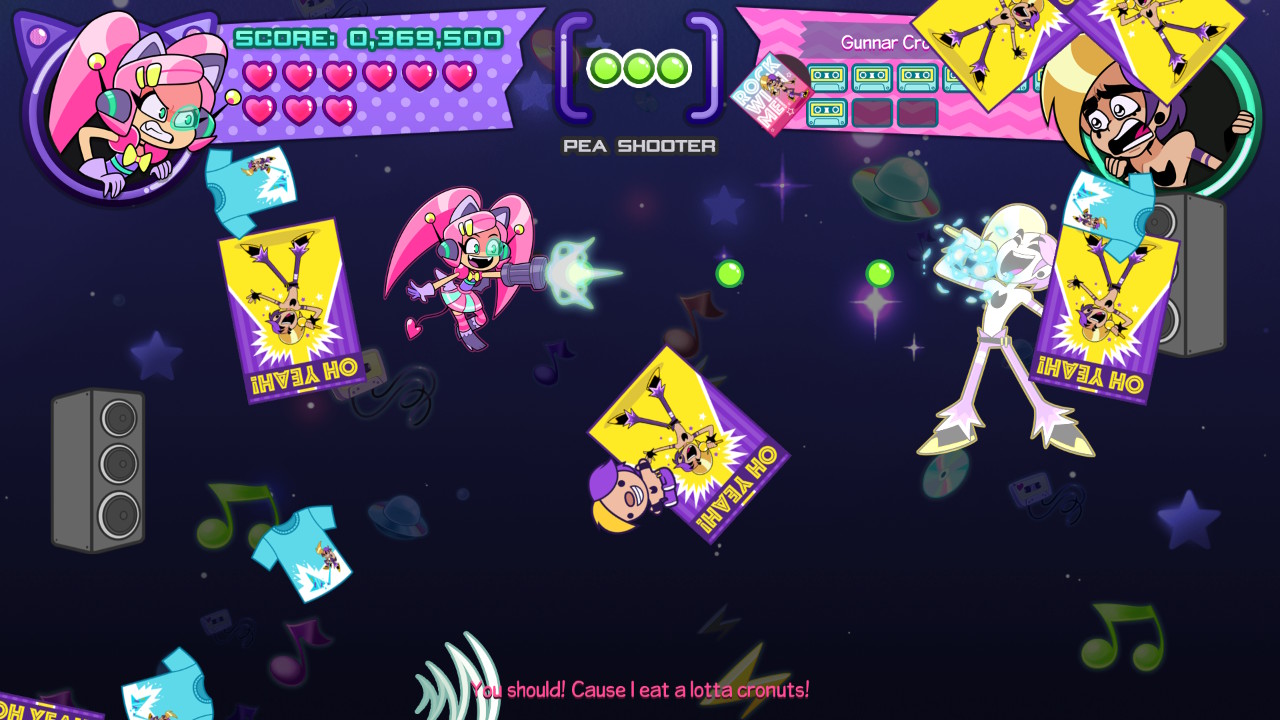 Cat Girl Without Salad follows the antics of Kebako, the titular cat girl who hates the titular salad; grabbing a salad will make you lose health, so keep that in mind. She and her pal Squiddie are on the lookout for intergalactic baddies that threaten the galaxy. She does this with the help of her peashooter and random cartridges that can shoot out different types of bullets. While it’s a shoot-em-up of the horizontal variety, these cartridges are what separates Cat Girl Without Salad from the rest.

When picking one up, Kebako’s weapon changes and you’ll need to adapt your strategy to fit the weapon. From a Dance Gun that turns the game into a DDR-like clone at the bottom of the screen to a Puzzle Gun that turns your projectiles into a game of Puzzle Bobble (matching three of the same color will cause smaller enemies to explode), there’s a variety of weaponry which references a lot of old school video games. They’re references of the lawyer-friendly variety, but they’re all fun and cool to use. That said, they are difficult to hold in an initial playthrough because every time you get hit, you lose your current cartridge and have to rely on your peashooter to get through the rest of your enemies. I loved this gimmick, but the fact that I couldn’t utilize this cool feature for more than a few seconds because I would get hit by a stray bullet is a bit of a problem. Thankfully, beating the game once will allow you to have unlimited use cartridges that don’t expire when you get hit, so the problem is mitigated somewhat. 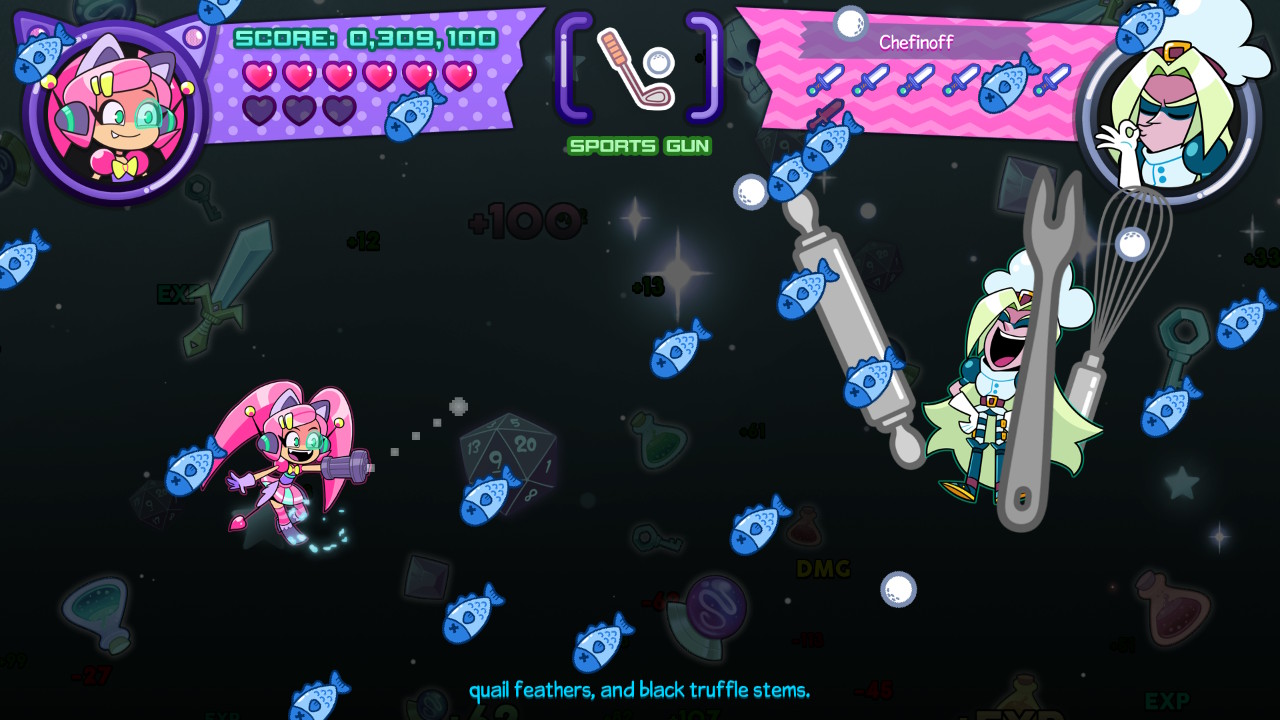 As for the presentation and art design of the game, this is what sells Cat Girl Without Salad. While there are only two voice actors in the game (Christina Vee and Todd Haberkorn), they both give it their all and voice multiple characters with distinct ease. The humor in this game is reminiscent of something like the manga Aho Girl, which is so gloriously stupid that I literally rolled on the floor laughing at some of the dialogue in the game. Kebako is so innocent it hurts, but she’s the type of character that you’d see in a slapstick comedy (who’s simultaneously good at almost everything she does, but a complete dolt). It’s her insufferably fun personality that clashes with the other devious antagonists that want her destroyed for some reason. It’s a game with a lot of heart, if that heart was destroyed with Harley Quinn’s mallet and then served as a kitten parade. (I mean this as a compliment.)

The graphics and overall look of the game is a marvel too, and it doesn’t feel like it’s aged four years. The character sprites look fun and vividly colored, and each of the levels are unique and cool to traverse, with a variety of enemies and bullet patterns to conquer. There are some slowdown issues when a bunch of enemies are on the screen, which are noticeable but not a deal-breaker. 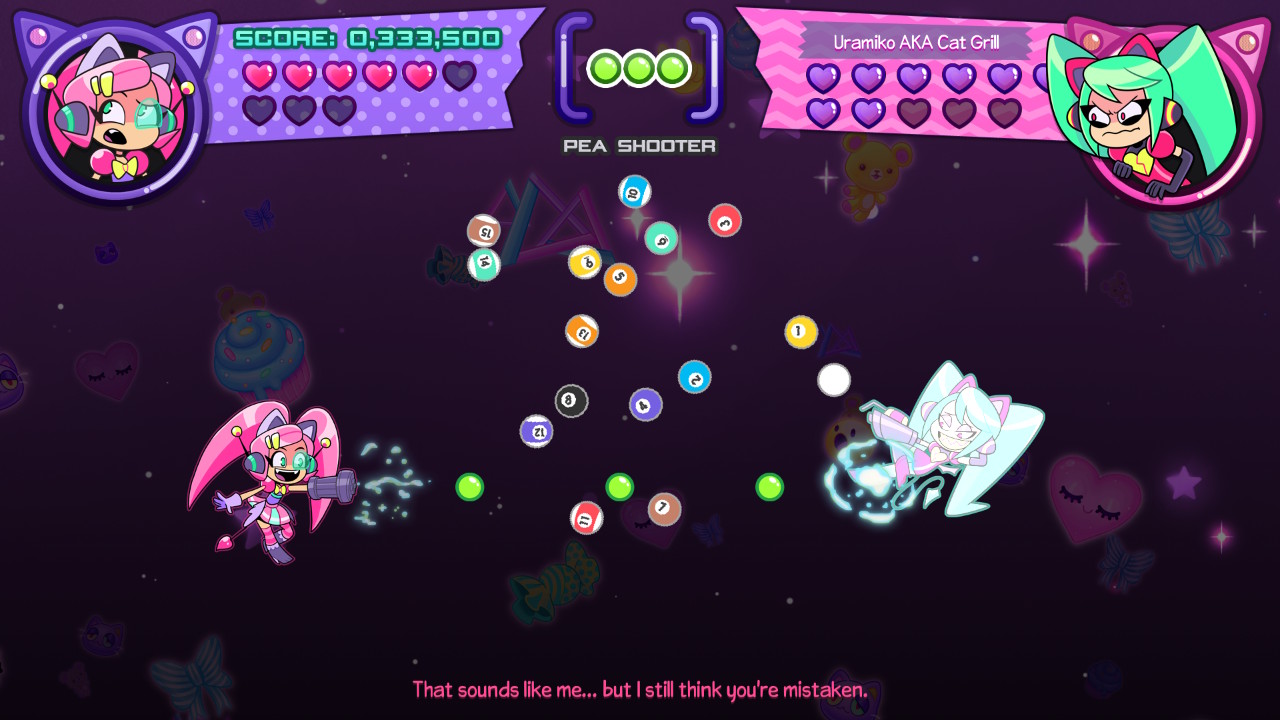 While I did enjoy my time with the game, I wish it wasn’t over so quickly: With only three stages, the game can be finished in under 30 minutes, which would be fine if not for the fact that the game is eight dollars. While there’s replay value in the fact that you can do another run with indestructible cartridges, there’s little else here afterwards. I feel like if this price was slashed in half, I could recommend it wholeheartedly. At its current price, however, I would say those who are interested in this April Fools’ joke should try it out, but wait for a sale to pick it up otherwise.

Cat Girl Without Salad: Amuse-Bouche is a fun little game that fans of Wayforward titles or a good laugh will enjoy. While I wish it was longer, there’s no doubt that a lot of effort went into making this a hilarious riot of a title.

Elisha Deogracias is an aspiring accountant by day, freelance writer by night. Before writing for Gaming Trend, he had a small gig on the now defunct Examiner. When not being a third wheel with his best friends on dates or yearning for some closure on Pushing Daisies, he's busy catching up on shonen manga and wacky rhythm games. Mains R.O.B. in Smash. Still doesn't know if he's a kid or a squid.
Related Articles: Cat Girl Without Salad: Amuse-Bouche, Indies
Share
Tweet
Share
Submit