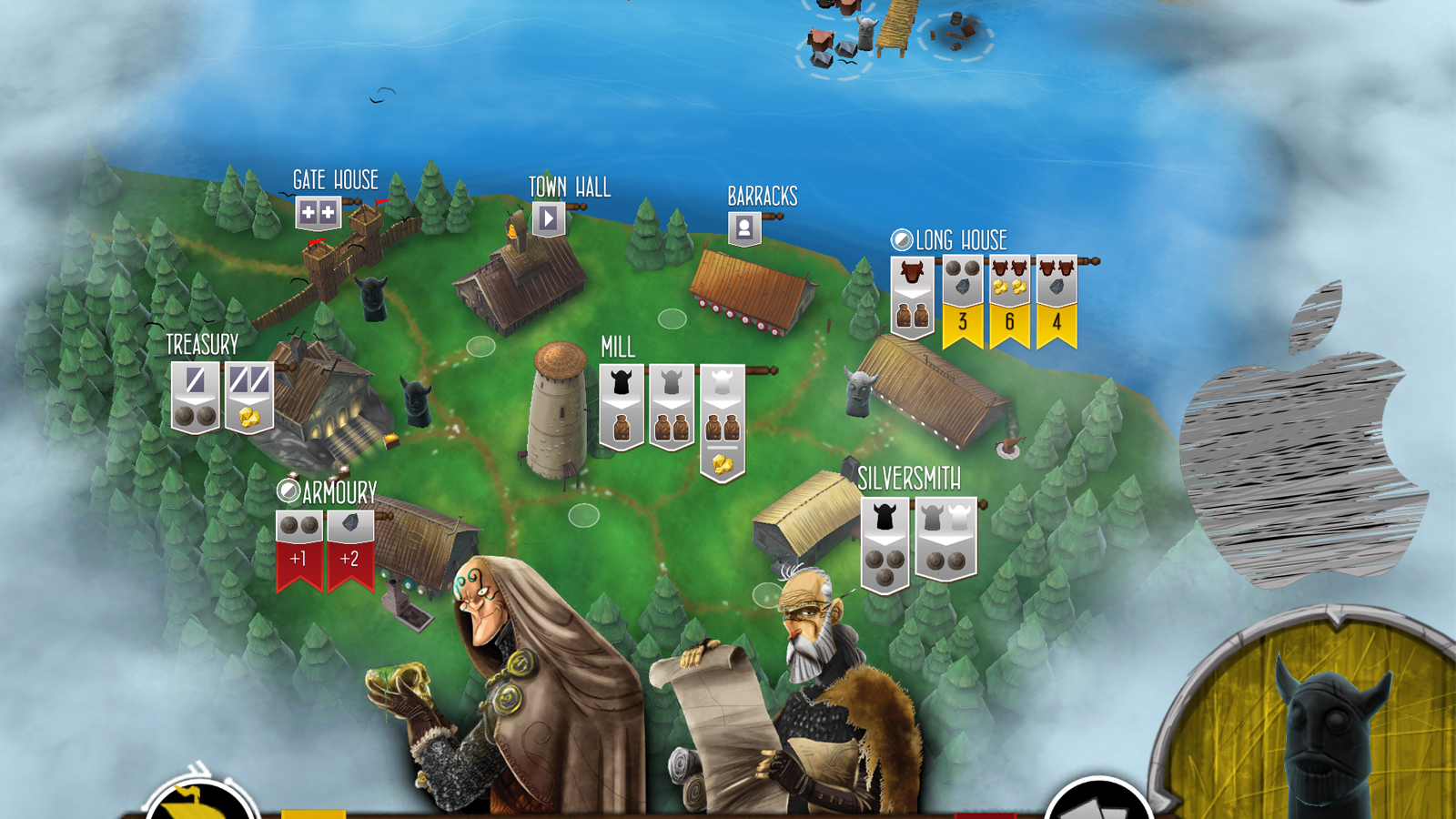 Direwolf Digital continues its great work on digital releases in its newest installment, Raiders of the North Sea from Garphill Games and Renegade Game Studios. A viking themed worker placement game where players compete to receive the most glory.

The first thing to catch your eye in this game is the beautiful aesthetics. Direwolf has taken great artwork from the game and enhanced it further. With streams that you can watch flow, boats that move, and clouds that float the digital version makes the game come alive. It isn’t just the background aesthetics though, as every action comes with crisp animations to show what is happening. 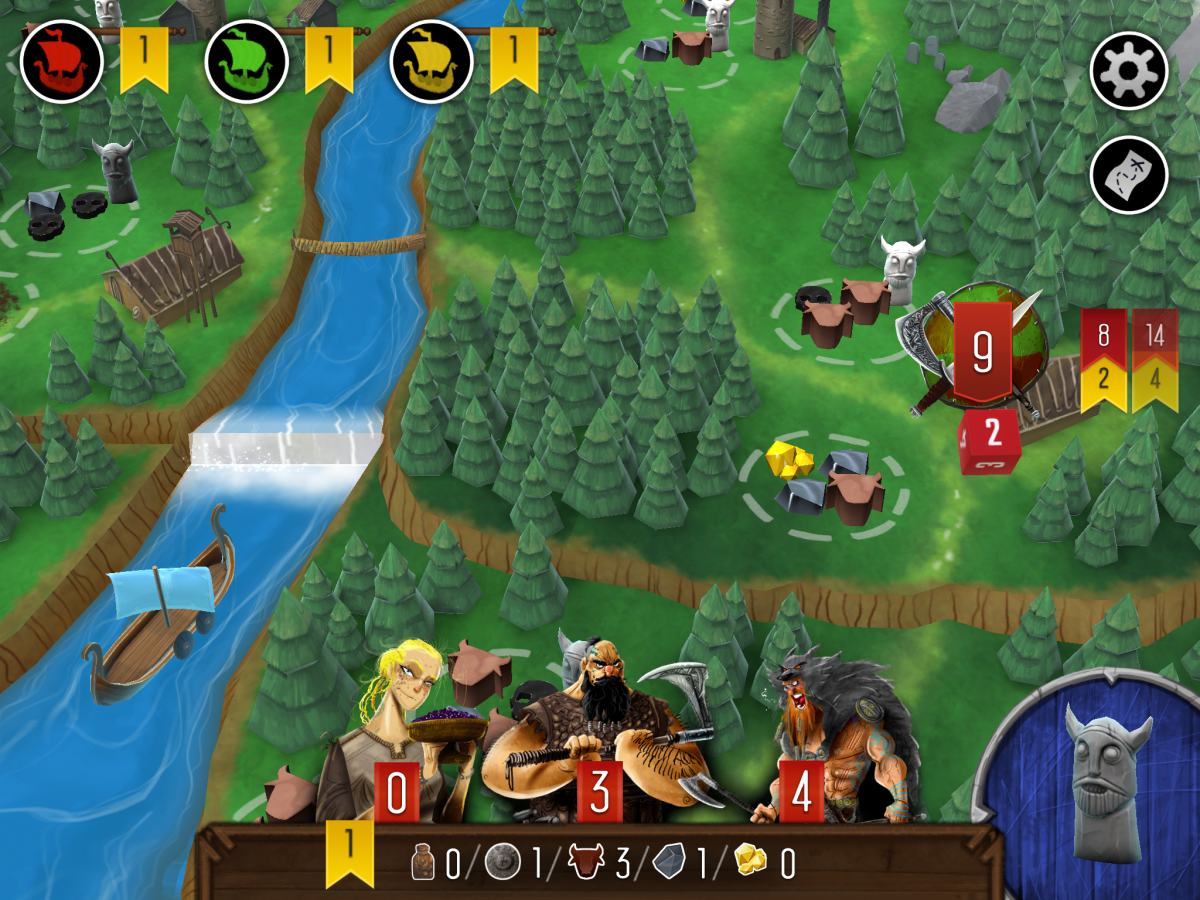 In Raiders of the North Sea, Vikings compete against each other to impress the chieftain by raiding harbors, monasteries, and eventually fortresses. Players must first hire crew members to go on the voyages and make sure to have the necessary provisions. Going on these raids will reward players with items such as gold, cattle, and iron, which can be used to give offerings to the chieftain or prepare for future attacks.

For people who have played the original board game, the mechanics will be familiar, but for those who haven’t played the game offers a short tutorial. It, unfortunately, doesn’t go into detail about all of the aspects of scoring, but it does a great job of introducing strategy tips for new players. Thankfully if you forget what something does you can click and hold on it, and the tooltips will explain. These tooltips will also help explain why you can’t raid a particular area and detail the missing requirements.

After the tutorial, you can jump straight into battle versus the AI or can enter into a ten-game campaign. This campaign is terrific as it slowly builds each game and adds more complexity and different requirements. By changing the base rules and focusing on specific aspects, it allows you to explore strategies you might not have tried before. The campaign gets progressively harder as you continue and thankfully, as a result of feedback from players, Direwolf has increased its difficulty further to make it more challenging.

Navigating the screen is very intuitive, and once you learn where everything is located, the UI can be very informative. Want to look at all of the possible raid locations? Opening the map lets you see the locations, requirements, and their rewards at one glance, and by clicking on one of the locations, the game will take you to that location. While the game does take you to the location, if you decide that you want to go back to the village, you will have to scroll down manually as there isn’t a return to village button. In another update, Direwolf has modified the game to return to the village after your turn. This is a welcomed change as it will prepare you for your next turn and remove the clunkiness of having to get back to the village. 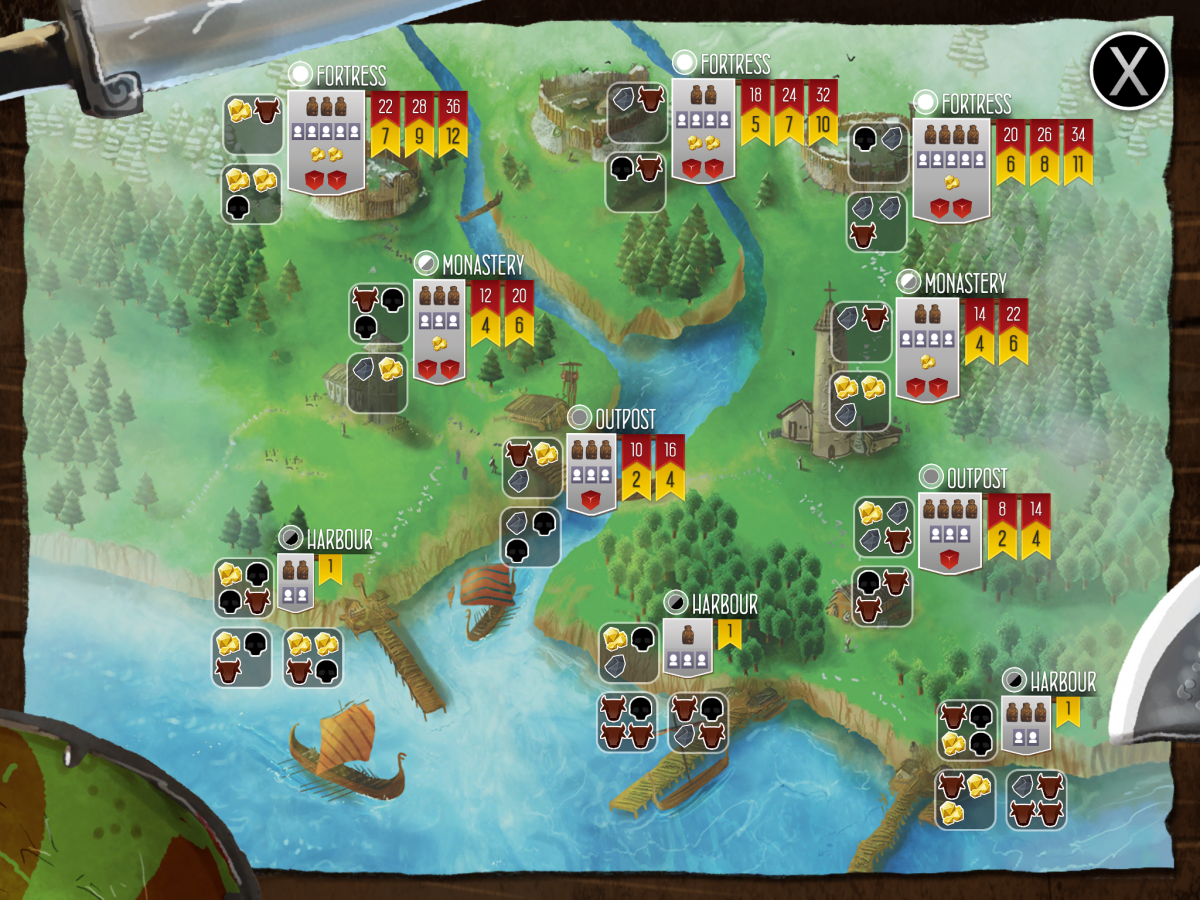 Pressing the ships of other players will let you instantly see what everyone else has. Opening up an overview will let you compare the number of people hired, cards in hand, resources, and much more. This information makes formulating your strategies much more straightforward, and with the quick turns no longer will you have to worry about other players analysis paralysis. Note: There are no features to remove your analysis paralysis. The game also gives you the ability to start a game where you left off; you can play whenever you have a moment. If you didn’t like how that game was going, you can also always start over. 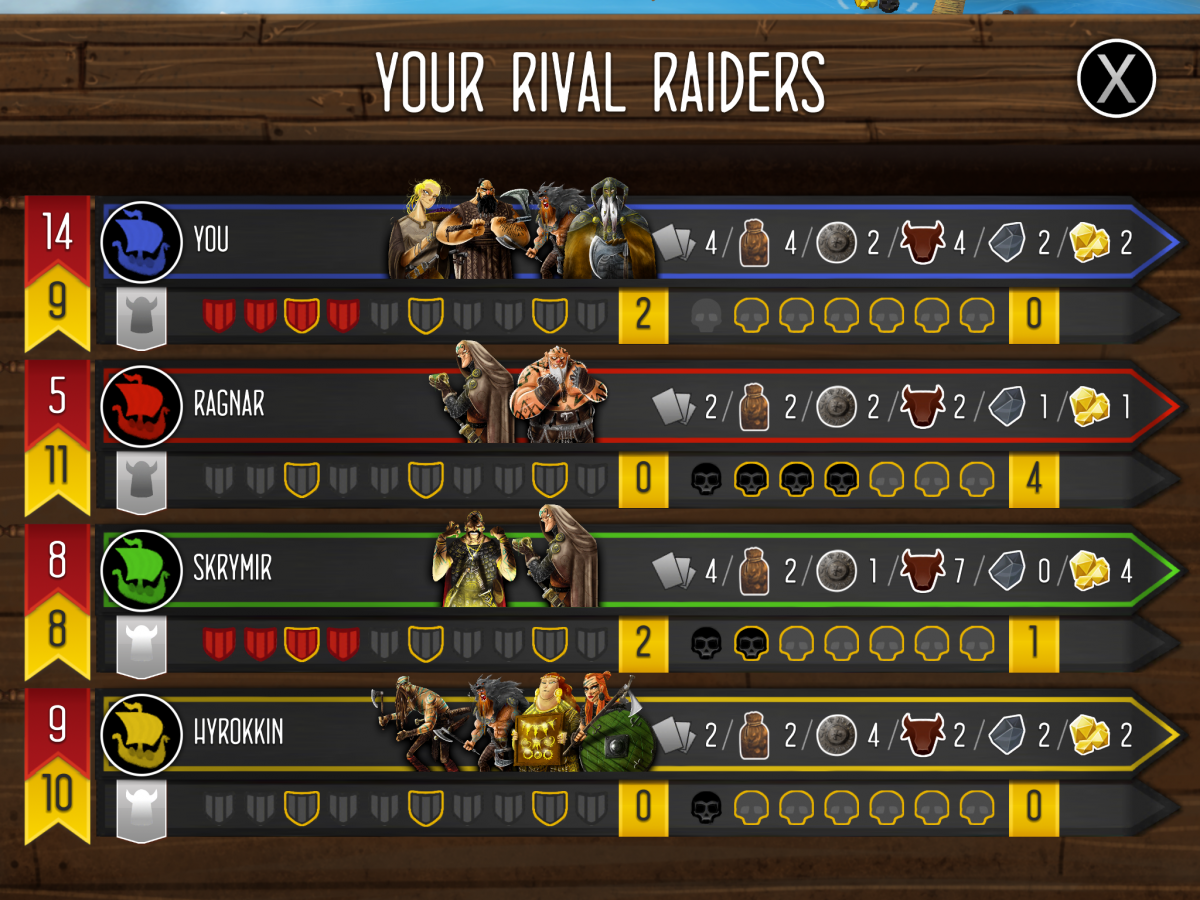 While this game has a lot of polish, there were still some areas that need additional help. The tutorial should be a place for completely new players to get a full walk-through of how to play all areas of the game. In the tutorial of the game, valkyrie and armor are mentioned, but the scoring aren’t detailed. You won’t understand these rules unless you read the rules or wait until later in the campaign when scenarios involving these are used. A simple dialogue box could help inform new players about these rules so they can use them in their strategy. Secondly, multiple times I wasted a turn going to the mill when trying to go somewhere else. The lack of an undo button universally was very frustrating. On some buildings an undo would be offered but on others, if you accidentally dropped your worker on an area, there would be no way to reverse it. While the movement has been improved, it is always possible to move too quickly and drop one where it doesn’t belong. Because players also have to pick up another worker, it wouldn’t be changing the flow, and would improve gameplay. The difficulty of the game was initially a concern because even after mistakes I would win by a considerable amount, but the developers are continuing to work and release harder AI to challenge.

Raiders also offers the ability to play against others online and even the opportunity to take turns over time. Now you can create a game with friends and each play when available instead of needing to be on at the same time. This is an excellent alternative for people who want to play together but don’t have the full 45 minutes necessary to play an online game.

Raiders of the North Sea

Raiders of the North Sea Digital is a beautiful and fun implementation of a great board game. With the simplicity of placing and removing workers, and quick AI games are short. With a few additional tweaks to the interface and gameplay, it could be even better. Thankfully Direwolf has already released some improvements and is continuing to work to make the game as polished as possible.

A father of three with a degree in Mathematics, Jason has spent the last 4 years building his passion for tabletop games. With a collection of well over 300 games he spends a night each week with his family introducing them to new concepts and equipping them with problem-solving skills. Jason enjoys a large variety of games but some of his favorite include Architects of the West Kingdom, Blood Rage, and Terraforming Mars.
Related Articles: Raiders of the North Sea
Share
Tweet
Share
Submit