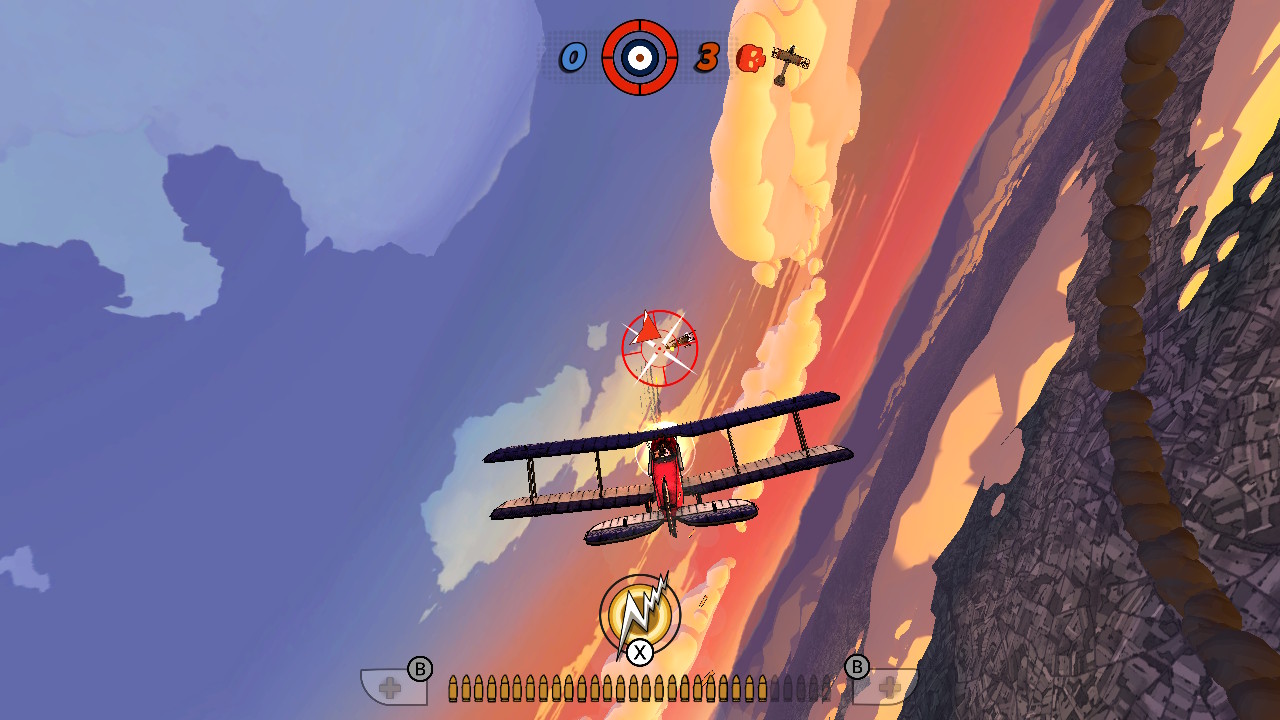 April 1917, otherwise known as Bloody April, was filled with casualties as the Royal Flying Corps and the German Luftstreitkrafte battled in the skies. Get ready to experience the dogfights from both sides in a myriad of missions.

Skies of Fury DX involves players taking on the role of a fighter pilot as they accomplish one of three objectives. Each mission is either a deathmatch, an escort mission, or a timed course. Deathmatches are just what they sound like, and you must gun down every enemy you see. The enemies come in waves that will appear as you eliminate some of your targets. Escort missions give you a group of planes to protect as they follow a designated path to a goal. The enemy pilots spawn endlessly, so you need to keep an eye out for sudden appearances. The timed courses task you with flying through rings and shooting targets on the way to the final green ring. Doing this adds more time to the clock, and in some cases, the next checkpoint won’t appear until you do. Even though these are the only mission types, there’s enough variety in difficulty and enemy patterns to keep you playing.

There are a total of 100 missions spanning across five chapters. Each chapter has 20 missions, with 10 missions on the British side, and 10 on the German side. You can jump between sides as you play, or if you decide to focus on one side first, you can do that too. Completing a chapter unlocks a comic page based on the actual events of Bloody April, which is a nice historic touch. You unlock two comic pages per chapter, and they are interesting to flip through at the end of the game. Besides this, however, there isn’t an actual storyline to the game. That being said, the game stands well enough on its own and doesn’t need one.

If you want to add some difficulty, there are also challenges to go along with each mission. They can be turned on or off before beginning a mission, and achieving victory with them increases the amount of experience earned and gives you extra loot boxes. The words “loot boxes” have made some players wary, but don’t worry, there’s no pay to win aspect to this game. The loot boxes are earned from challenges, and also by leveling up. Each loot box contains a random plane skin or reticle design for your planes, so they’re more cosmetic rather than functional. As a result of the randomness, if you get a duplicate, it immediately gets turned into extra experience to prevent it from being a complete loss. Early on, you’ll most likely obtain plenty of skins that you can’t use until you’ve leveled up and unlocked the other planes. This isn’t necessarily bad, because I found it nice to have some cool new skins for my better planes that I unlocked.

The controls take a minute to get used to, but once you get the hang of it, the gameplay is fluid. The plane reacts quickly and the maneuverability makes the dogfights that much more intense. The ability to do rolls and flips to avoid gunfire with the push of a button is flawless. Having one Joy-Con control side to side and speed, while the other one controls up and down is extremely helpful. The comic book style aesthetic mixed with the vibrant scenery engages the player even more. Speaking of scenery, clouds play a bigger part than just being a visual detail. Flying through clouds hides you from sight and makes you harder to hit, but it also slows you down in the process. The same thing goes for the enemy pilots, so take that into account.

Going back to the planes themselves, every plane has their own stats to think about. Some planes do more damage, while others have more durability, and some can maneuver more effectively. Leveling up and earning skill points allows you to upgrade various aspects of your plane. The skills carry over throughout every plane, so you don’t need to worry about conserving points for each plane. The skills are broken up into three categories: sniper, gunner, and survivor. Sniper skills focus on accuracy and critical hits, gunner skills focus on damage and firing rate, and survivor skills focus on health and damage reduction. Each category leads to their own final skill that upgrades your ultimate ability. The ultimate ability relies on a meter that fills up as you play. When activated, it increases critical hit chance, firing rate, damage resistance, and even stops the clock during timed courses for a short time.

Skies of Fury DX is enjoyable and provides some challenging aerial battles. There are a limited variety of mission types, but the number of missions available and their difficulty keeps the fun going. The game also provides a survival mode, where up to four players can fight side by side against waves of enemy planes. If you feel like facing off against your friends, there’s also a versus mode, where up to four players can battle to see who is the king or queen of the skies. No matter what mode you choose, there’s plenty of fun to be had as you take to the skies.

Skies of Fury DX is a great addition to the aerial battle genre. Based on actual events, it allows players to play a part in a historical battle. There's enough challenges and excitement to make you want to gun down enemy pilots for hours, which I happily did.

Codi loves to play video games and watch movies. He will watch almost any kind of movie just to experience them. His ideas take inspiration from the shows and movies he watches, and games he plays. He also loves a good pun.
Related Articles: Skies of Fury DX
Share
Tweet
Share
Submit