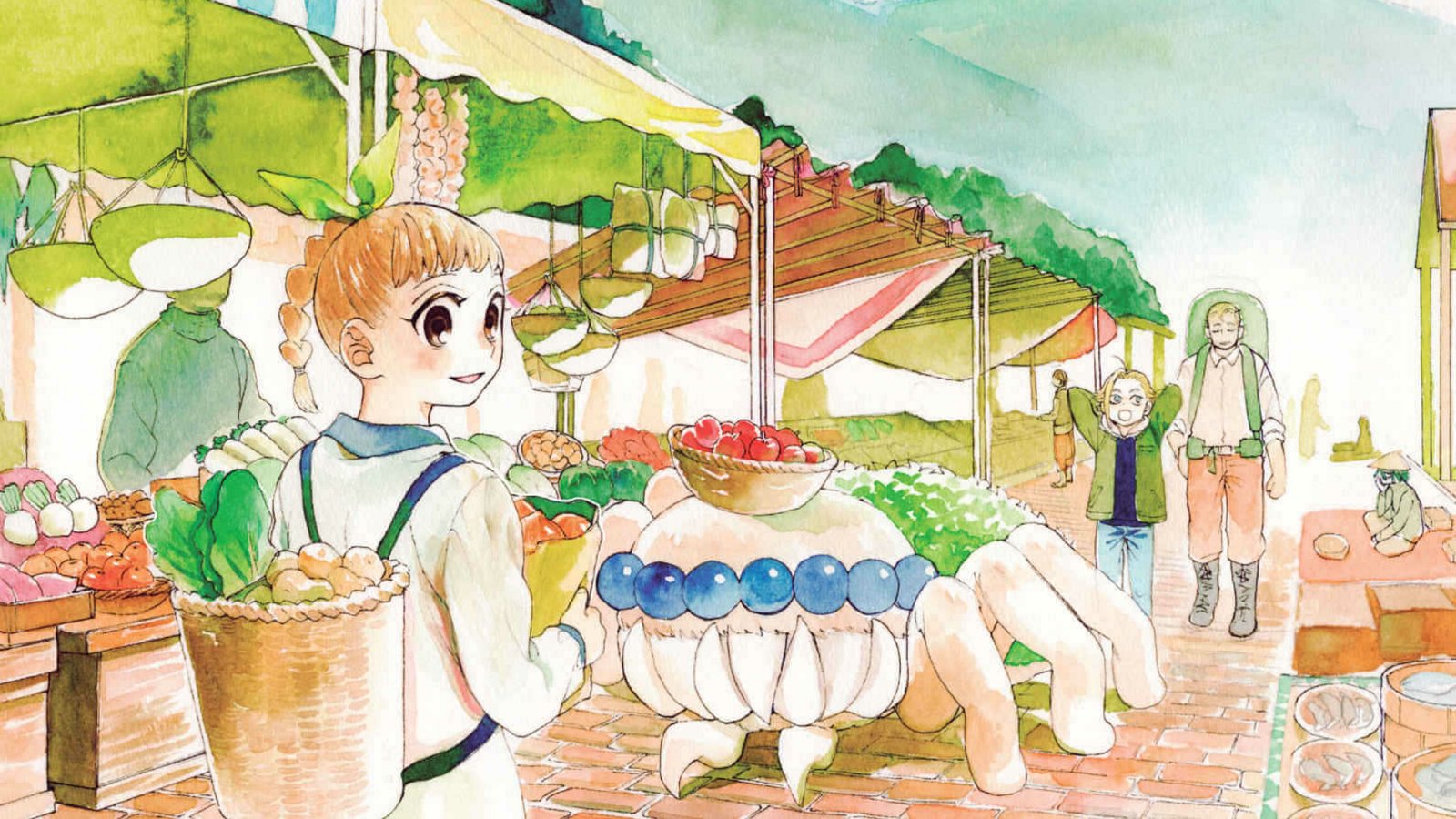 A few months ago, I reviewed the first volume of the manga Giant Spider & Me: A Post-Apocalyptic Tale, which was an endearing story about a girl and her pet spider. While I did have an enjoyable time overall, I did note that the uneven balance between the grim and cute elements hampered the narrative a bit. With the next volume of the manga, we focus the story on slice-of-life elements that make for a stronger story, even if it sacrifices the “post-apocalyptic” feel of it.

When we last left our protagonists Nagi and Asa, they were exploring with a man who found the pair’s house; a mysterious figure appears and threatens to shoot the group. The continuation reveals that the person is Belle, the man’s daughter, who tried to find him after getting separated earlier. After diffusing the conflict and making some food for the two strangers, Nagi and Belle become friends. Belle and her father suggest that Nagi and Asa should head to the nearby town in order to fix the roof of Nagi’s house, which was damaged in the previous volume.

Nagi reluctantly agrees and heads to the town’s marketplace where the townspeople are instantly scared of her pet spider Asa. From their reaction, it seems that this was the reason Nagi was unenthusiastic about heading there. After a couple of adventures within the town, Nagi and Belle find a mysterious boat-turned-café stranded nearby the town. Inhabited by a mysterious owner, he asks the two to work for him in order to bring customers at the place in exchange for fixing Nagi’s roof.

I had a more enjoyable time with this volume of Giant Spider & Me due to the fact that this volume focuses on the more daily life aspects of the series rather than the dark overtones of the setting. The world building advances a little more as Nagi opens up to the town, and the introduction of the townspeople is a refreshing addition compared to the paltry cast members of the first volume. Belle’s spunky realism is a perfect contrast to Nagi’s innocent optimism, and the two make a good friendship as they investigate how to fix the broken roof. Within the supporting cast, you also have Godot (a man that seems to favor Nagi’s pleas that Asa isn’t a monster) and Oleg (who, regardless of how much people praise Asa, is still skeptical of it).

The initial reactions of the townspeople are realistic and believable; if we’re assuming that this is a setting that’s been ravaged by an unknown conflict, giant spiders randomly popping up would be a bit of an issue. This volume tackles Nagi’s struggle with trying to convince the townspeople that her pet Asa isn’t what they assume it to be, though common sense and prior knowledge is against her. Thankfully, this process develops at a reasonable pace, and is resolved pretty well.

The food portions of the series aren’t overlooked either; like the last volume, each chapter showcases a different recipe as the focal point, and they’re used quite well. It helps that much of the cast can cook pretty well, and you can also cook along with the included recipes. The art style matches this, with a pleasing, slow-paced simmer that details things like tofu and fish within panels. It’s no Food Wars, but it does the job very well. I did enjoy the fact that the last two chapters were separated as a two-parter, and thus had a transformative recipe with its Sea Bream (from sashimi in the first chapter to a soup in the second).

It’s an odd criticism, but I think the biggest flaw with this volume is that it actually de-emphasizes the “Post-Apocalyptic Tale” aspect of the title. With the revelation of the town and its people, I was expecting it to be a quaint but unnerving place, but it turns out… it’s just a regular old town. There’s nothing here that would separate the series from the setting of something like How to Treat Magical Beasts, so that might be something that can develop in future chapters. This volume also doesn’t feature a lot of Asa, specifically the last third of the volume, as Belle and Nagi head off and find the boat café; in the previous chapter, Asa isn’t seem for much of it since it’s blamed for the massacre of chickens in a nearby coop.

Changing up the formula to be a more slice-of-life book, Giant Spider & Me: A Post-Apocalyptic Tale Volume 2 is a stronger continuation from its predecessor. The introduction of new characters as well as a continued emphasis on food make this a mighty fine meal.

Elisha Deogracias is an aspiring accountant by day, freelance writer by night. Before writing for Gaming Trend, he had a small gig on the now defunct Examiner. When not being a third wheel with his best friends on dates or yearning for some closure on Pushing Daisies, he's busy catching up on shonen manga and wacky rhythm games. Mains R.O.B. in Smash. Still doesn't know if he's a kid or a squid.
Related Articles: Beyond the Page, Giant Spider & Me: A Post-Apocalyptic Tale Volume 2
Share
Tweet
Share
Submit