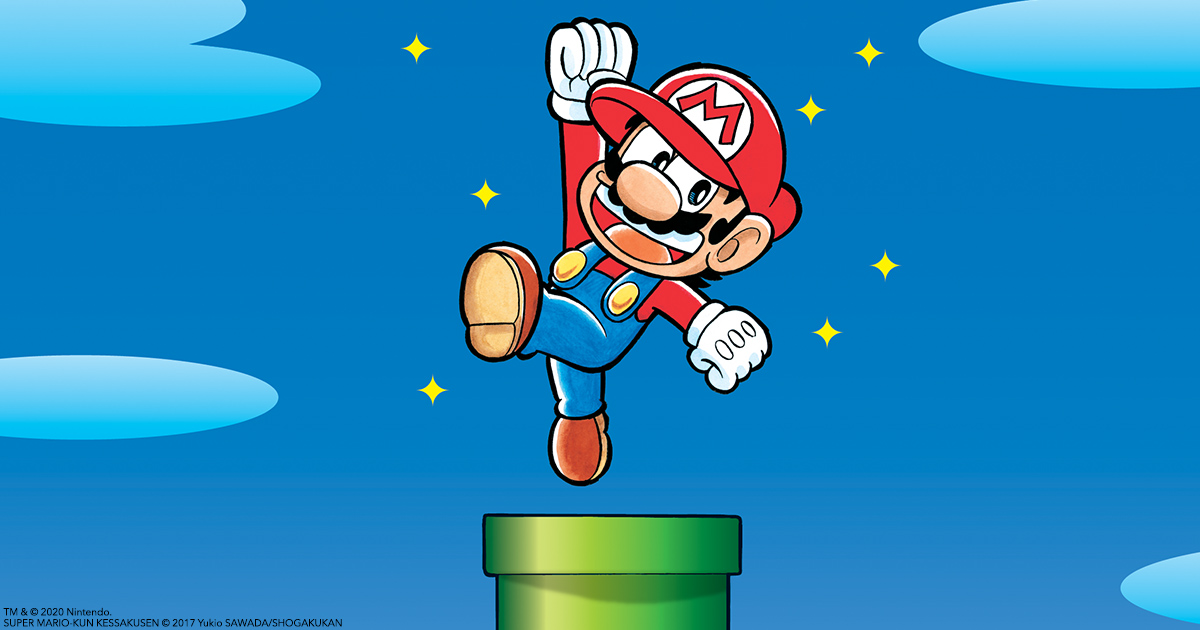 While I’ve heard Mario speak before thanks to Charles Martinet’s iconic video game performances (and by extension, television shows), I’ve always thought of him as a semi-silent protagonist. He’s a man of very few words, but those are all you need to make a memorable Mario game. So imagine my shock as Yukio Sawada’s long-running manga series finally got a Western release in the form of Super Mario Manga Mania, a greatest hits compilation of the series which features a motormouth version of our favorite plumber. 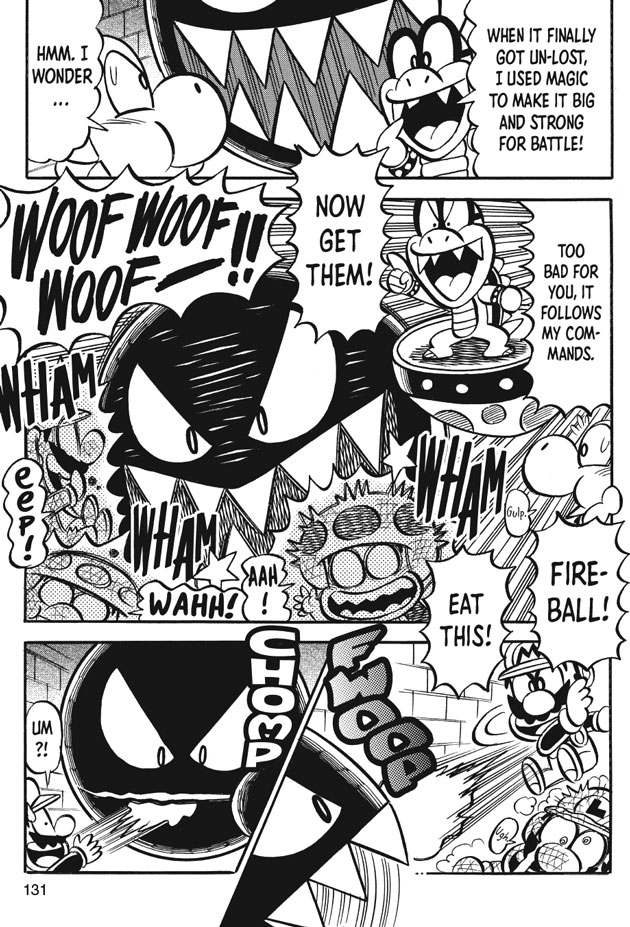 Super Mario Manga Mania is a slice of the nearly 30 year (and still going!) run of Yukio Sawada’s Super Mario-kun manga, which adapts the mainline Super Mario platformers plus a ton of other games in the franchise. I first heard about the manga as an obscure piece of trivia as a teen, and I wondered when or if it would come over here. Now that I’m much older, it’s interesting to see how Sawada portrays Mario.

And in short, Mario’s a jerk! Unlike the family-friendly depiction of the character in media like the Super Mario Brothers Super Show, Super Mario-Kun is more of a gag manga ala Bobobo-bo Bo-bobo. Everyone in the manga is a humorous caricature of their source material, with Mario, Luigi, and Yoshi being a trio of bumbling fools that can’t help but crack a joke every couple panels.

This is admittedly refreshing to see a radically different take on Mario, but it’s pretty jarring to see how much he talks. Instead of getting a guide character, he usually just speaks on his own accord (though these characters still appear in their respective games), but if you don’t want a brash and boisterous personality, this manga might turn you off. If there’s one thing I can say about the source manga, it’s that the art style is distinct and consistent, setting it apart from other video game adaptations. It has this childish Saturday morning cartoon style, but the fact that this anthology covers nearly a decade of released games and still has the same art is a testament to the dedication of the author to create an accessible work for all. 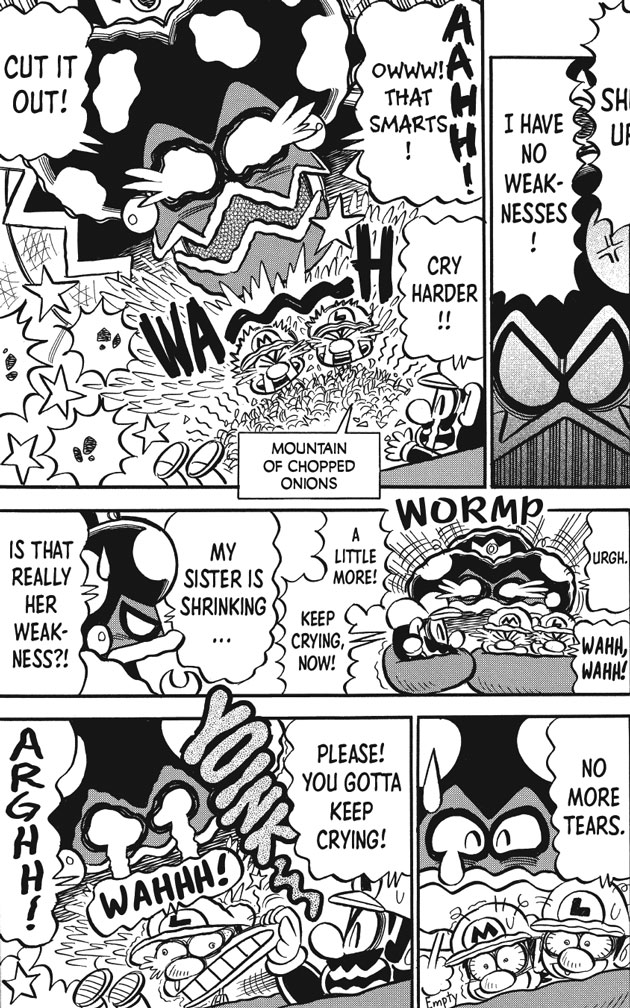 As aforementioned, the volume is a greatest hits compilation of the manga’s extensive backlog, and unfortunately won’t be a comprehensive look at the original experience. Case in point, out of the nine chapters (plus a tenth story), a grand total of three chapters is dedicated to Super Mario Sunshine, while two are dedicated to Super Paper Mario. Not too much of an issue, but that’s about half the book at this point; you also have stories that are based on Paper Mario, Mario & Luigi: Partners in Time, Super Mario Galaxy, and New Super Mario Bros. Wii.

Since these games were (loosely) adapted to their entirety, you’ll only get bits and pieces of the stories in this volume, which is a shame considering most of the chapters are great.The Bouldergeist Super Mario Galaxy chapter resonated with me, as it shed a light on one of the harder Daredevil Comet stars in the game, but also made me sympathize with the boss (even if I nearly threw my Wiimote out of frustration 13 years ago). There’s also the issue that if you weren’t invested or completed games this volume’s adapting, you’ll feel out of the loop. It’s a nice sampler, but considering we didn’t get any of the original manga volumes beforehand, it feels like an afterthought. 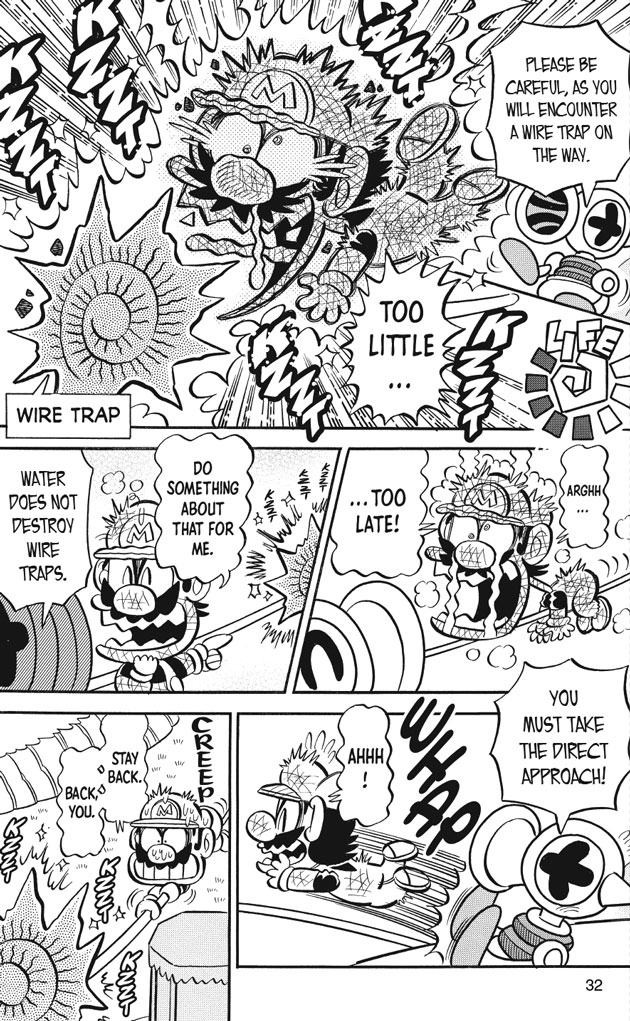 That said, I really want to support the continued release of the Super Mario-Kun manga. There’s a bonus tenth story that deals with the consequences of an aging fanbase; the story is uncharacteristically melancholy as a downtrodden Mario laments that his 25th anniversary causes him grief due to the fact that he might one day die. It’s these moments that give Super Mario Manga Mania a little more depth, but I just wish I could see the complete story here. Hopefully we can get future issues of the Super Mario-kun manga, but for the time being, this is a nice start.

Super Mario Manga Mania is an extremely small slice of the popular Super Mario-Kun manga, but one that fans will eat up. While the portrayal of Mario might not be everyone’s cup of tea, and some stories only work with prior knowledge of the games mentioned, it’s still a fun read for $9.99.

Elisha Deogracias is an aspiring accountant by day, freelance writer by night. Before writing for Gaming Trend, he had a small gig on the now defunct Examiner. When not being a third wheel with his best friends on dates or yearning for some closure on Pushing Daisies, he's busy catching up on shonen manga and wacky rhythm games. Mains R.O.B. in Smash. Still doesn't know if he's a kid or a squid.
Related Articles: Beyond the Page
Share
Tweet
Share
Submit