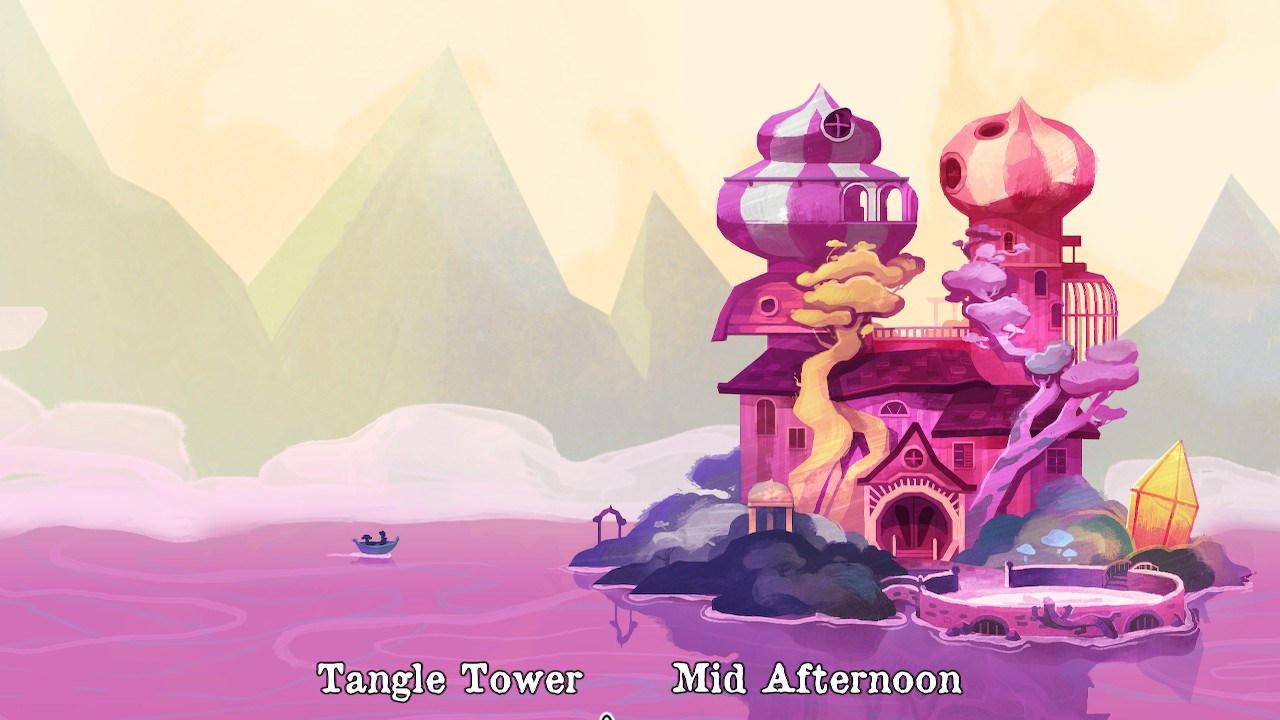 Freya Fellow has been murdered. Stabbed once in the chest while painting a portrait of her distant relative, Flora Fellow. The suspects are the nine current residents of Tangle Tower. The murder weapon appears to be a knife found with Freya’s blood on it. The only problem is that knife isn’t real: it’s part of the portrait the victim was painting.

Tangle Tower is a murder mystery adventure game. You investigate by exploring the titular Tangle Tower, speaking to its residents, solving puzzles, and finding clues. As a huge fan of both murder mysteries (see our Jenny LeClue review) and adventure games, Tangle Tower immediately intrigued me. Top that off with a unique, animated art style and full voice acting, and you’ve got a recipe for an excellent video game. I’m happy to report that Tangle Tower absolutely delivers on all its promises. 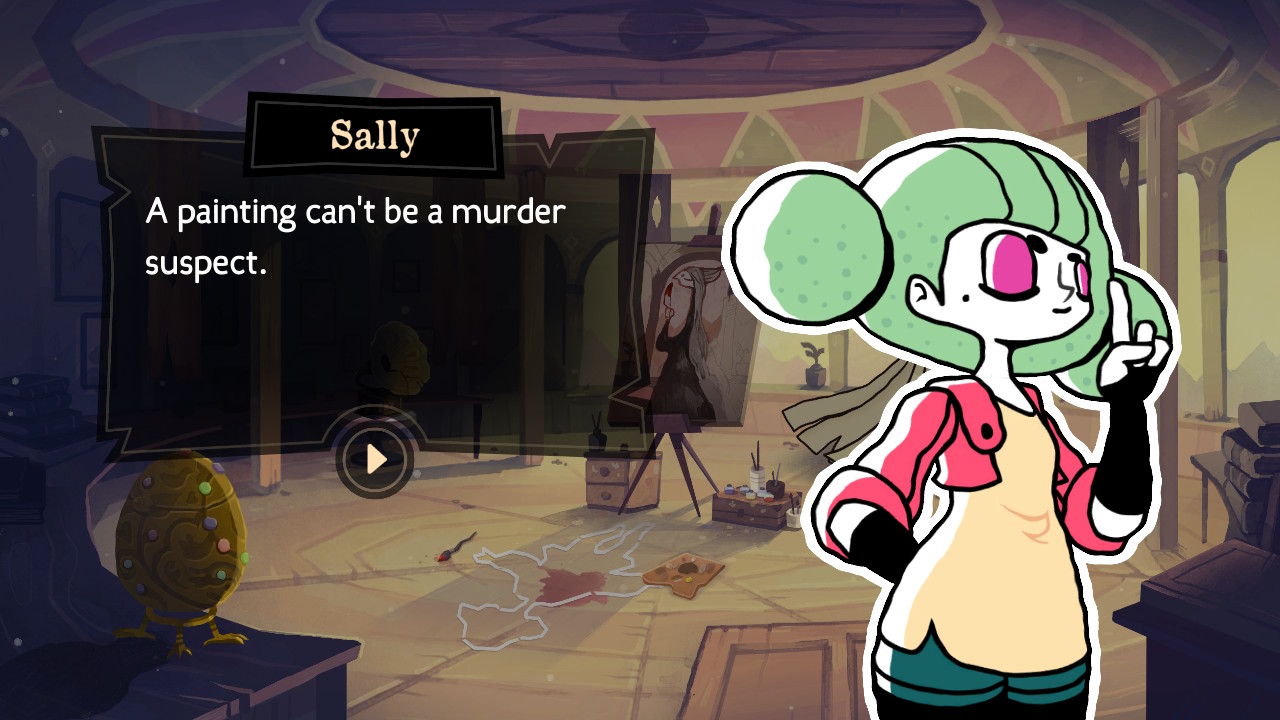 The first thing you’ll notice when booting up the game is the art style. Each background is gorgeously detailed, with some nice lighting and fog/dust effects to create that mysterious island mansion vibe. They’re thankfully not too cluttered, don’t make you pixel hunt for clues, and most interactables stand out in some way. Each area of Tangle Tower feels distinct and memorable, while also giving you some insight into its inhabitants. For example, the amateur biologist Fifi Fellow has set up shop in the mansion’s library. It appears to be very disorganized, with papers strewn about the room, but in such a way that you can tell she knows exactly where everything is. Or the aspiring pianist Poppy Pointer, her gothic aesthetic is perfectly reflected in the music room, with a scant few candles to illuminate her dusty dwelling, which, as protagonists Detective Grimoire and his partner Sally point out, are really a fire hazard.

In addition to its quirky cast of characters, Tangle Tower possesses some quick witted quips. Both Detective Grimoire and Sally have something funny to say about almost anything and anyone they encounter, it makes them immediately likeable even if you don’t get to know too much about them. It’s like watching an episode in a long-running, episodic series, except with more pointing and clicking. Speaking of pointing and clicking, on Switch Tangle Tower provides three methods to get your fill of pointing and clicking. In docked mode, you have the standard moving a cursor around with the analog stick, or you can use motion controls to do the same thing. I didn’t use the motion controls much, as that method of control doesn’t particularly appeal to me, but from what I did try they seem to work well enough. The same goes for the stick and button controls, they work well enough, not exactly remarkable but not bad either, although a lack of button shortcuts for exiting menus or opening the map can be annoying. The best way, in my opinion, to play Tangle Tower is using touch controls in portable mode. The game is also available on iOS via Apple Arcade, and it feels like it was designed for a touch screen or mouse and keyboard. However, I found the smaller size of my phone’s screen didn’t do the art enough justice. It’s still gorgeous regardless but seeing the game on a big TV screen is a delight. 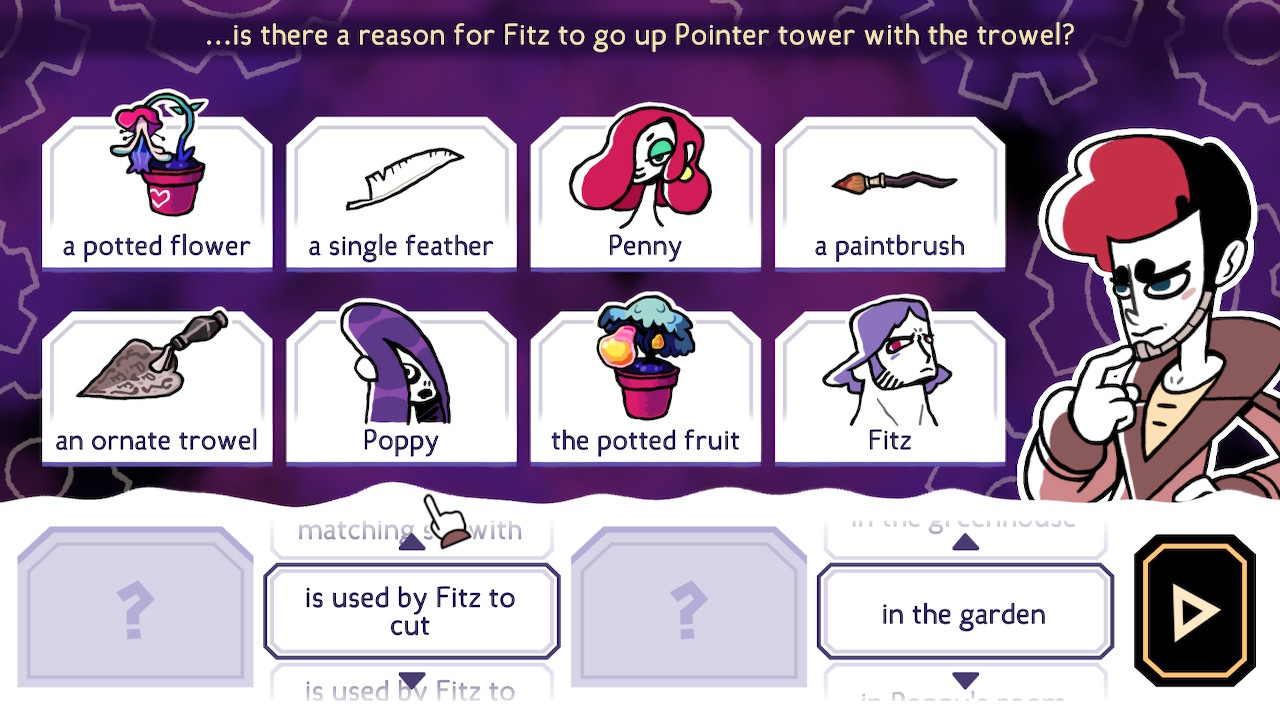 If you don’t like listening to characters talk, Tangle Tower may not be for you. There is a LOT of dialogue here, each character has a response to every object and person you can ask them about. And you’ll often need to ask everyone about everything to continue your investigation. Thankfully, if you get stuck there’s a hint button on the map screen which provides vague enough hits to let you figure out what to do on your own while pointing you in the right direction. It’ll tell you to “speak to Penny” or “investigate Freya’s room.” It strikes that balance of giving you some direction to avoid having to run around the mansion searching for something you missed, but still letting you play the game and investigate.

Unfortunately, no game is perfect and I do have a few gripes with Tangle Tower. I’ve already mentioned the lack of button shortcuts, which while minor is still annoying at times. Nearing the game’s final act, the pace picks up a bit too much for my liking, you encounter a lot of new clues very quickly and I would have preferred more time to suss out who the culprit was before the game proceeded to its semi-cliffhanger. By the end, I had solved the mystery, but there were still a few questions left unanswered. Depending on your perspective, however, you may see this as a positive because it could mean the continuation of Sally and Grimoire’s adventures.

Tangle Tower is a delightful time all the way through. Its gorgeous art style, animation, intriguing mystery, and full voice acting make it stand out, even among the best of its contemporaries. While the ending does feel rushed, there’s still plenty here to love and it only makes me want more of Detective Grimoire and Sally’s sleuthing.

David is the kind of person to wear his heart on his sleeve. He can find positives in anything, like this is a person who loved Star Fox Zero to death. You’ll see him playing all kinds of games: AAAs, Indies, game jam games, games of all genres, and writing about them! Here. On this website. When not writing or playing games, you can find David making music, games, or enjoying a good book. David’s favorite games include NieR: Automata, Mother 3, and Gravity Rush.
Related Articles: Tangle Tower
Share
Tweet
Share
Submit