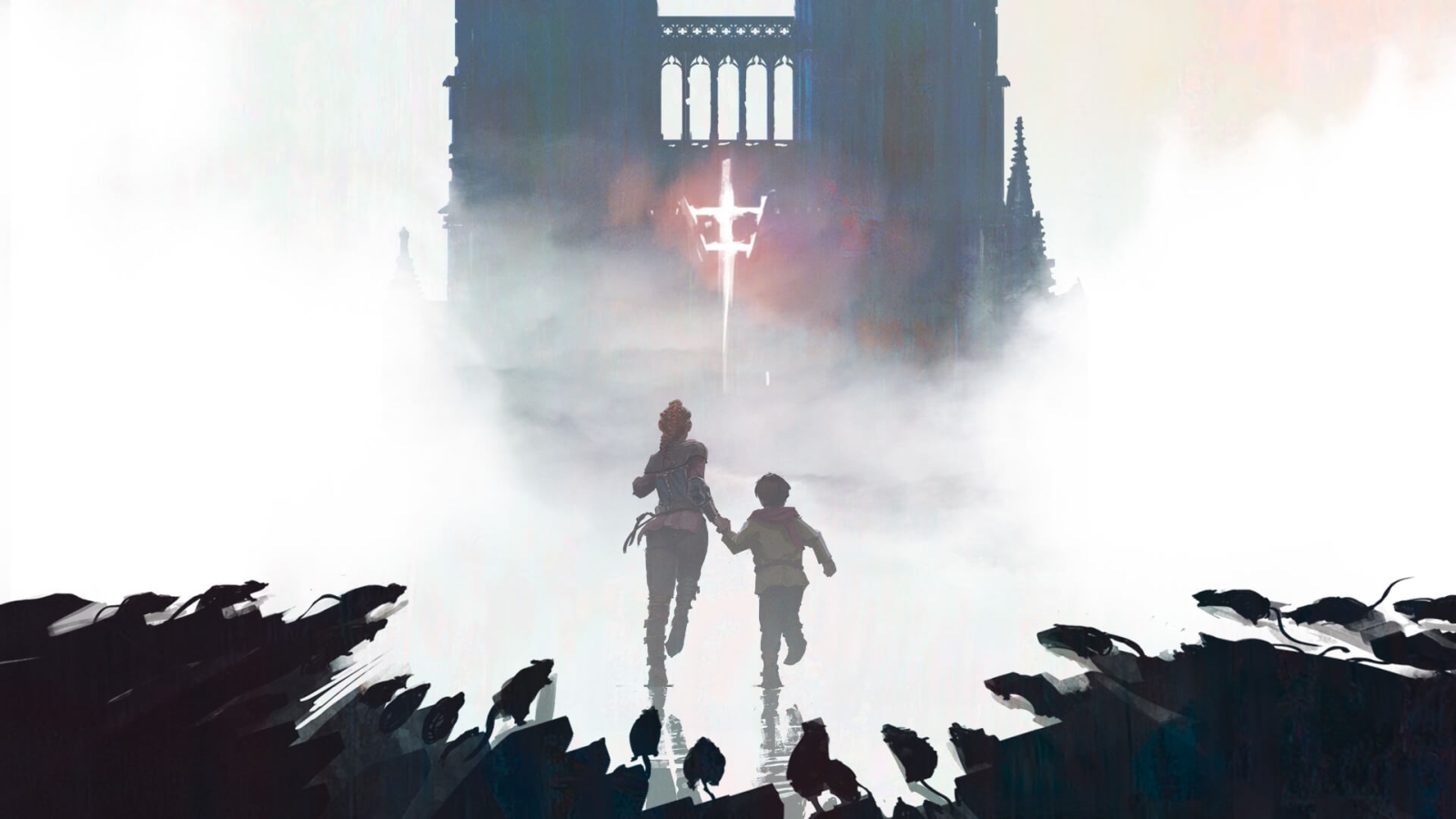 There is a war of escalation in video games. Every year we see more new games on the market, and each one is vying for our attention with a new twist in store for players. When I went to E3 last year I scheduled a back-to-back appointment set with Focus Home Interactive to check out games like Vampyr (my review) and Call of Cthulhu (Austin’s review), but while I was there the PR team asked if I’d like to see A Plague Tale: Innocence. I’d never heard of the game, but luckily I had a 30 minute block to sit in and see it in action.

In three days of E3 filled with cool and memorable stuff, A Plague Tale: Innocence came off as completely unique.

A Plague Tale: Innocence takes place in the 14th century in southern France, near the city of Bordeaux. Amicia, our 14 year old protagonist, is out hunting with her father and her dog Lion. Armed with a sling her father gave her, Amicia is an expert shot and cracks a boar in the head with a rock. Chasing their wounded prey, they find the boar completely shredded far beyond what Lion could have done while pursuing it. Heading back to the house empty-handed, events unfold rapidly that forces Amicia to flee her family home with her 8 year old brother, Hugo in tow. It quickly becomes apparent that it’s not Amicia they are after..

A Plague Tale: Innocence has an absolutely gripping story. Like a tightly-written novel, there isn’t a wasted moment, and if there’s any justice Sebastián Reynard and his team will pick up the accolades they deserve. The videos above and below contain the first three chapters (out of seventeen), but don’t give away much beyond the initial thrust of the adventure. It’ll let you see the roots of the mechanics, but the game picks up new twists periodically, so it doesn’t cover all of it. The first video covers the scenario I described above, the second covers the escape, and the third covers the introduction of the plague rat elements. It’s hard to say more without giving things away, so I’ll leave you with these videos to give you a small taste.

At its core, A Plague Tale: Innocence is a survival puzzle game, but don’t let that scare you away if you aren’t a fan of survival titles. There are two primary threats to Amicia, Hugo, and the friends they find along the way — The Inquisition, and rats. The Inquisition is relentless in their pursuit of the siblings, but they are also locked in a battle with French forces. War is hell, so this conflict produces a lot of dead bodies left to rot in the sun. Naturally this attracts rats, which are carrying the plague. When a single bite can mean death, and the rats are swarming by the thousands, they represent a terrifying threat, and an awesome gameplay mechanic.

Amicia doesn’t have special powers. She isn’t a battle-hardened hero, and she is ill equipped for the realities of war and death. Steel-clad knights bearing swords are a fatal threat to her and her companions, so she has to be wise about how she chooses to engage. Enemies can be distracted by throwing pots or flinging rocks into nearby metal objects, letting Amicia sneak past safely. If she can get the right angle, she can also hit them in the head, killing them instantly, as long as they aren’t wearing a helmet. She can also use a bit of alchemy to craft other projectiles to force the enemy to react, exposing their weaknesses. All of that said, A Plague Tale is not a combat-focused game, and none of those tricks will work on a swarm of rats.

The plague-carrying rats in Plague Tale are a completely inexhaustible and relentless threat. They aren’t fooled by your tricks, they don’t care about your sling or rocks, and they will consume every inch of your flesh in a matter of seconds if they get close. The only thing they fear is fire and the light that it brings. As such, when the sun sets, they swarm. Alicia can light torches, but she can’t climb with a torch in hand. She can light sticks from braziers when torches aren’t available, but they don’t last very long, leaving her vulnerable as she rushes through the throng of vermin trying to desperately reach the next light source.

When these two threats collide, the results are exponentially bad. Soldiers are smart enough to carry torches or lanterns to keep the rats at bay, pushing them closer to Amicia and her companions. In this scenario, Amicia can use her sling to break the lantern, letting the rats overwhelm the soldier and consume them. Similarly, Amicia can use the environment to her advantage, breaking rings on objects overhead or knocking down drawbridges. That said, while the game is linear, that doesn’t mean it is without choice. I don’t want to spoil anything big, so below is a very minor choice (with both outcomes) with very real consequences:

Beyond the light mechanics, Amicia and her companions will have quite a few puzzles to solve over the course of the 14 hours of gameplay in Plague Tale. If you’ve played classic titles like Ico then you have a measure of what’s ahead here. Hugo holds your hand much of the time, but occasionally you’ll need him to crawl through spaces where Amicia just won’t fit. He’ll unlock doors, hold down levers, and act as a second pair of tiny hands That said, unlike the norm in most games, he and the other companions are not invincible. If they are caught by soldiers or rats, and Amicia doesn’t intervene, they can be killed. It makes you think about how you navigate the world, and how often you leave them hiding in place to navigate challenges.

To help Amicia and her companions survive, the game features a crafting system. Amicia is no alchemist, so she handles business with her sling and clay pots. When she meets Lucas, an apprentice alchemist, he provides her with some rudimentary knowledge of how to combine things like saltpeter, alcohol, leather, and other consumables to create projectiles that can force an enemy to remove their helm, start fires, and even temporarily disrupt the rat swarm. These same elements are used to upgrade your equipment (bag capacity, noise while running, etc.), hence the survival tie-in. Every time you use a consumable, it’s one less that you can use for upgrades. In the end, I didn’t feel too much pressure to upgrade my gear, but every time I did I certainly felt the game become marginally easier. That said, the game would fairly immediately say “hold my Bourgogne Pinot Noir” and give you a new twist to keep me on my toes. It’s a well-balanced give and take element that I enjoyed throughout the journey. 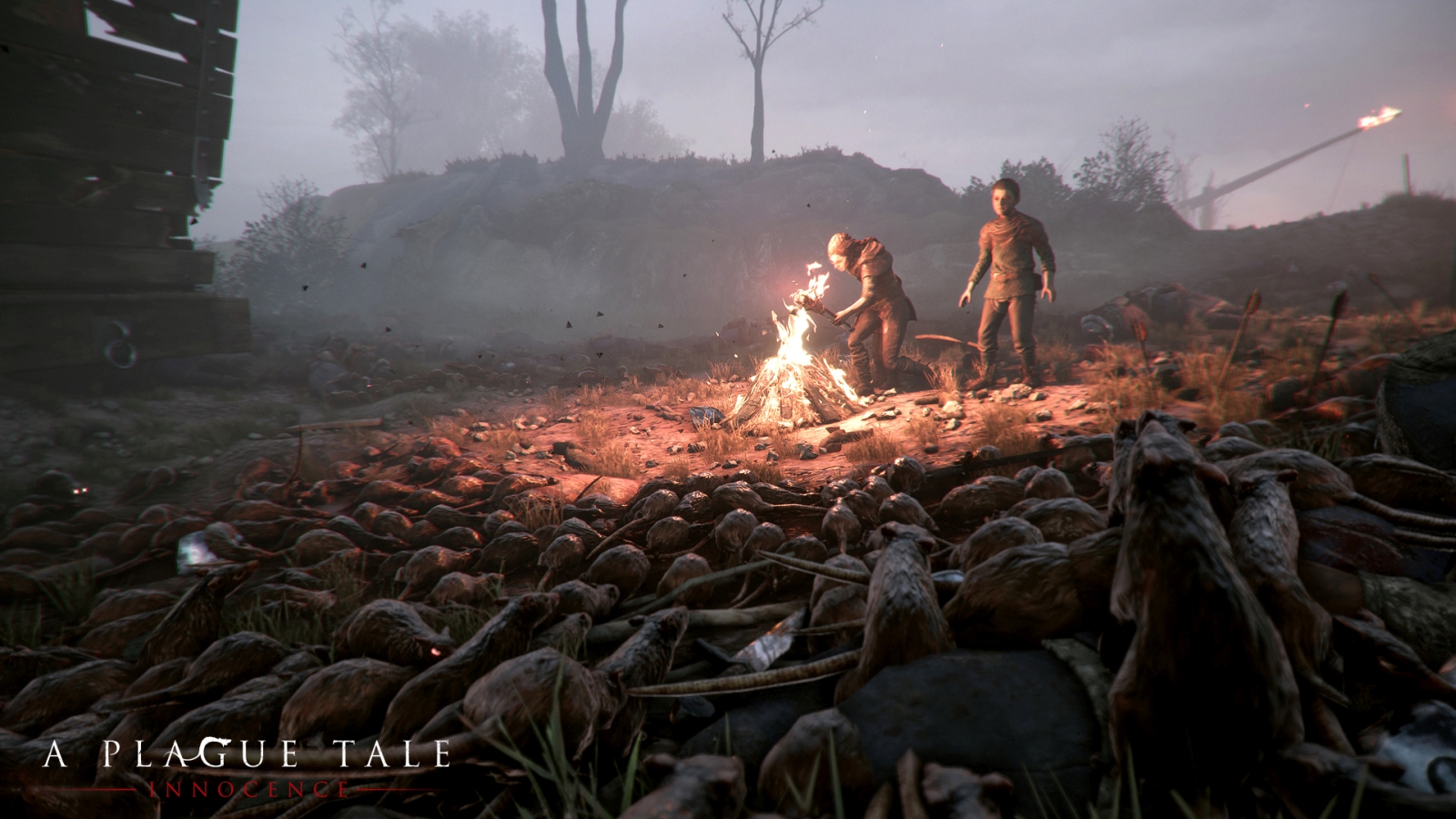 There can be over 5000 rats on the screen at any given time, swarming and ready to eat you alive.

Nearly every adventure game has collectibles, and Plague Tale is no exception. There are curiosities that are simply rare objects that you find out in the world. Additionally, there are a second set of collectibles which are essentially just like curiosities, but shown in a separate bucket for some reason. The third type of collectible, on the other hand, is absolutely magical. Hugo has spent his young life sequestered away from everyone for a mysterious illness. All of this time with his mother, who is trying to cure him, has given him ample opportunity to learn about flowers. When you discover a plant in the wild, Hugo will rush over and grab it, tell you why it’s important, and then pluck it and place it in your hair. This touching moment never stops being incredibly endearing, creating a beautiful connection between these two characters and a real impetus to try to find every flower.

As I mentioned, the game has a compelling and engaging storyline. There are a few opportunities to make a few choices beyond the mechanics, but your choice to punish those who killed your family or spare them is ultimately a road to nowhere. It’d be fantastic if these lead to different outcomes, as they are often life and death, but that’ll likely have to wait for the sequel.

There’s only one real problem I encountered with A Plague Tale: Innocence was that occasionally there are texture pop-in issues during cutscenes. It’s such a minor nitpick, and one that likely would be alleviated if I moved the install from a mechanical drive to an SSD or m.2 drive.

If I’m being completely honest, I found myself with an uncommon problem at the end of the game. Like a good mystery, the storyline doesn’t answer everything. It provides closure, but leaves you with a few unsettling questions. It’s a welcome sort of uncomfortable as most games are tied up with a nice little bow — Plague Tale is not. I can only hope Focus Home gives Asobo the chance to expand on this fantastic story they’ve given us.

With a magnificent storyline replete with devious puzzles and gorgeous vistas, A Plague Tale: Innocence is as beautiful as it is disturbing. A survival stealth title at its heart, Asobo Studio’s approach to the story of the bubonic plague is completely unique, and one I can’t recommend highly enough.

Ron Burke is the Editor in Chief for Gaming Trend. Currently living in Fort Worth, Texas, Ron is an old-school gamer who enjoys CRPGs, action/adventure, platformers, music games, and has recently gotten into tabletop gaming. Ron is also a fourth degree black belt, with a Master's rank in Matsumura Seito Shōrin-ryū, Moo Duk Kwan Tang Soo Do, Universal Tang Soo Do Alliance, and International Tang Soo Do Federation. He also holds ranks in several other styles in his search to be a well-rounded fighter. Ron has been married to Gaming Trend Editor, Laura Burke, for 21 years. They have three dogs - Pazuzu (Irish Terrier), Atë, and Calliope (both Australian Kelpie/Pit Bull mixes).
Related Articles: A Plague Tale: Innocence, Let's Play
Share
Tweet
Share
Submit