Farming simulations, regardless of the developer, all generally start the same: you inherit a dilapidated farm from a family member, and set to work getting back to basics as you build your own agricultural empire. Story of Seasons: Pioneers of Olive Town follows this same basic idea, except this time you have a motorcycle… well, a scooter. But either way, the bike is almost as cute as you are when you roll into town. Pioneers of Olive Town features the most robust character creation tools of any Story of Seasons to date, and even allows your farmer to have mismatched eyes, a feature I happily took advantage of.

The newest installment of the Bokujō Monogatari games features everything you’d expect: animal husbandry, fishing, farming, mining, and romance. The Harvest Sprites have returned, though with a new way of helping, and there are more types of stone, wood, grass, and other crafting materials to collect than ever before. As the name suggests, you’ve come to Olive Town to follow in your grandfather’s pioneering footsteps, and what would a pioneering game be without the chance to explore and chart new, unknown territory? 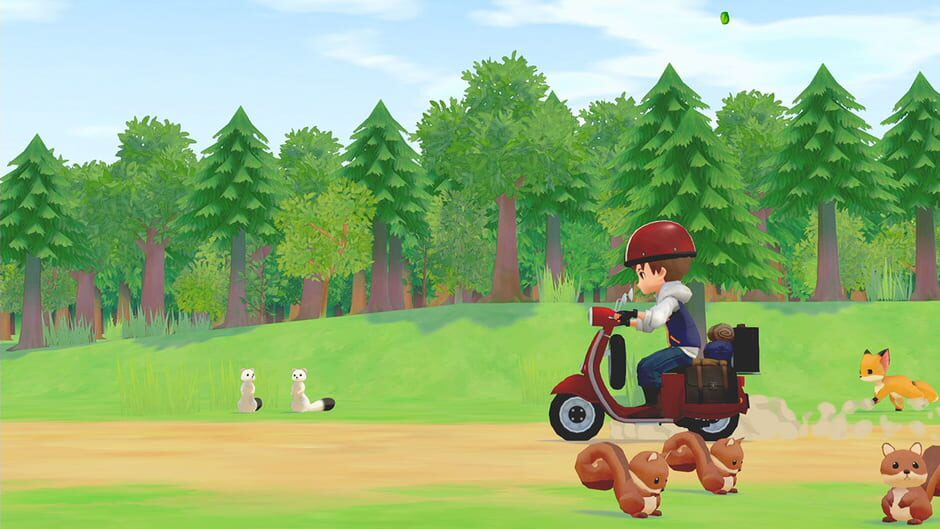 Story of Seasons: Pioneers of Olive Town seeks to add a degree of exploration and freedom which previous installments have been lacking, though doesn’t quite stick the landing on here either. While I was pleasantly surprised by the amount of time I did spend customizing my farm, creating zones, moving buildings, and laying paths, things still felt limited, and I found myself wanting more. Paths, for example, can only be laid on a grid, with no rounded corners or curves. They also cannot be placed too close to things like the entrance to farm buildings, nor can they be butted up to bridges, placed up ramps, or basically used in any aesthetically pleasing way. That said, they are terribly useful, as they keep trees and weeds (which slow your speed when you run through them) from spawning in the middle of your most-traveled paths.

When it comes to exploration, I was actually rather disappointed at first. While I was delighted to see the return of the mine, it seemed to bottom out at only 10 levels. My farm also felt quite small, and I was ready to gripe and grumble all day. Then I repaired a bridge and lo and behold, I had access to a whole new swatch of farm land, a deeper mine, new foragable items, more robust crafting materials, and more. I am actually rather delighted by the way the game unfolds and new areas unlock. 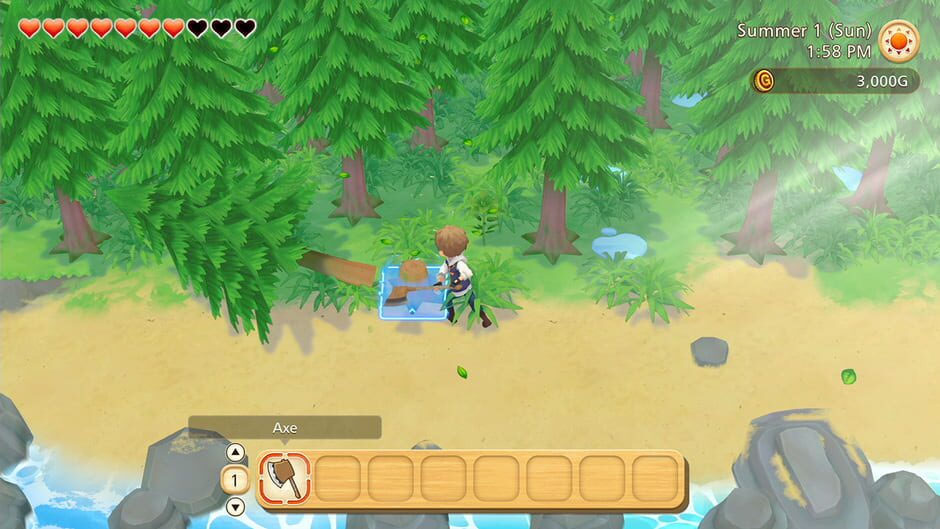 Pioneers of Olive Town continues to portray the in-game models of characters as less chibi than in previous instalments. While still quite big-headed, characters are taller and their in-game character models resemble their portraits more than before. While these new models look great, the characters themselves seem to fall a little flat. They’re all charming as a group, the three-generation family that runs the general store, the fisher family who spend all day in the sun, the mayor’s bumbling son, the scooter/motorcycle gang of almost bad boys who wear leather jackets. It’s all charming, but they all kind of blend together beyond that. I didn’t find that one standout character whose personality grabbed my attention early.

That said, you’re not lacking in choices, should you decide to try and woo the heart of an Olive Town local. All bachelors and bachelorettes have their heart meters unlocked and from the start of the game, regardless of the gender of your character. The menu also provides some occasional tips about their likes and dislikes, and the more you befriend them, the more you’ll learn about their interests. As you grow your farm and improve the town, new characters will arrive and new shops will unlock. This is all part of your partnership with the town mayor to help place Olive Town on the map, making it a flourishing tourist town. To be successful, the town will have to undergo a number of upgrades to the town, funded by the fruits of your farm work, of course. 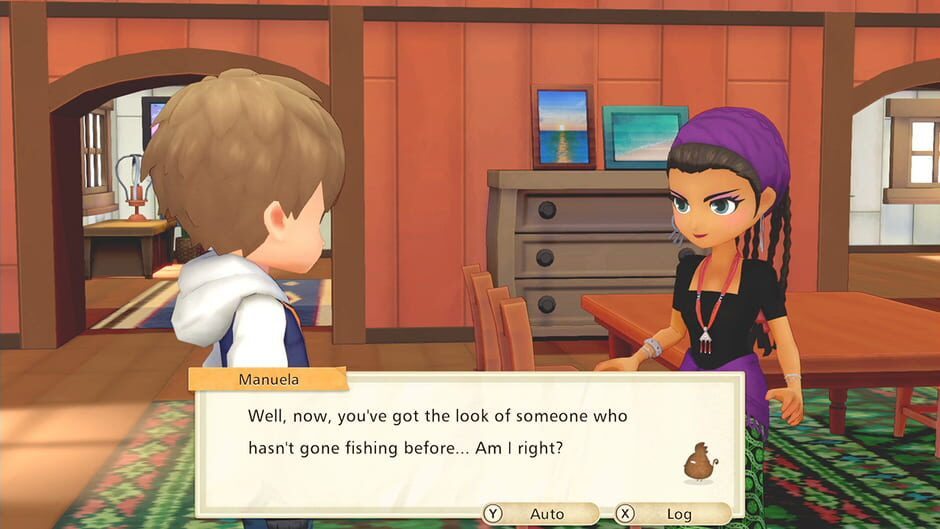 Speaking of upgrades, the town map has received one of the biggest quality of life updates of any SoS game to date: While the map is open, you can simply press Y to view the hours of every single store in town. That said, I still walked up to the General Store only to find it close countless times, despite having that information at my fingertips. You often do feel the pain of making that trek into town, because load times can be rather long. I am happy to say that the team has been working hard to improve on this, and I have seen noticeably shorter load times since I first started playing.

You also now have the option to store your tools inside a specific toolbag, freeing up your inventory for crops, forragables, and more. You do need to remove a tool from your toolbag and place it in your inventory before you can use it, so you do end up sacrificing space for convenience. The inventory menu is also mapped only to the D-pad arrow buttons, leaving the shoulder buttons entirely unused. I would have much preferred being able to cycle between my tools and items using the shoulder buttons; instead I have to release the left stick in order to grab a different item, meaning I can’t walk and switch tools at the same time. 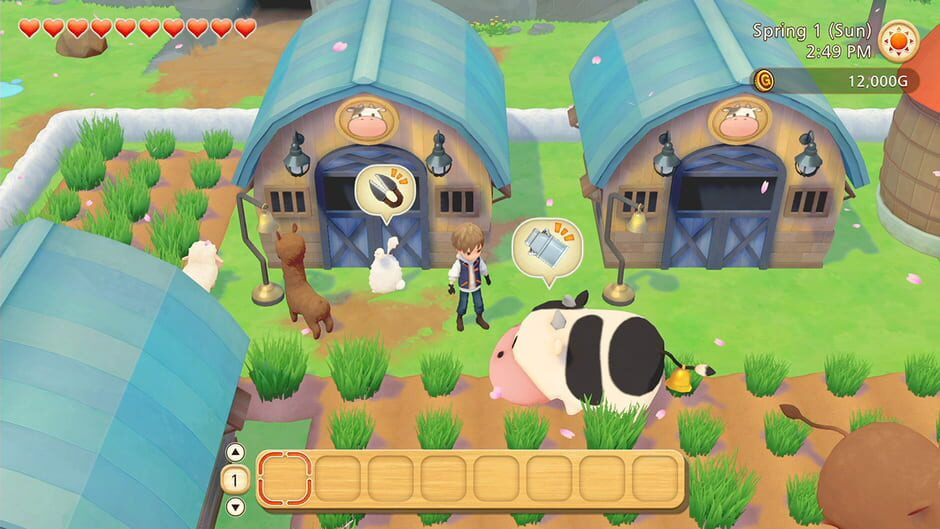 I found storage in Pioneers of Olive Town, as a whole, to be incredibly frustrating. There is no way to sort, quick sort, or quickly move items from your inventory to your storage chests, or vice versa. This made inventory a real slog, especially when I had things like fodder, eggs and mayonnaise, fishing bait and the components necessary to craft it spread across several chests and locations on the farm. The lack of smart inventory management became frustrating even during cooking, when the game would highlight the ingredients for a recipe, but does not automatically switch between your bag or fridge if you have the ingredient in one but not the other.

Story of Seasons: Pioneers of Olive Town is a sweet, easy-to-play, enjoyable little farming simulator. It’s charming, if not a little shallow. Your efforts to revitalize the town, making it more appealing to tourists seems a little contrary to the rural farm life I’ve some to expect of the Story of Seasons games, but in order to progress, you do have to fill large sections of your farm with machine ‘makers,’ so it doesn’t feel entirely out of place within the game itself. It’s a solid entry for those who love farming sims, but doesn’t quite capture the magic of some of the earlier games.

Story of Seasons: Pioneers of Olive Town is an enjoyable little farming romp; it’s charming and calming, but doesn’t quite capture the magic of some earlier installments. While slow load times, customization restrictions, and a few quality of life issues can make parts of your play a bit of a slog, the mines have returned, you can romance any eligible bachelor or bachelorette