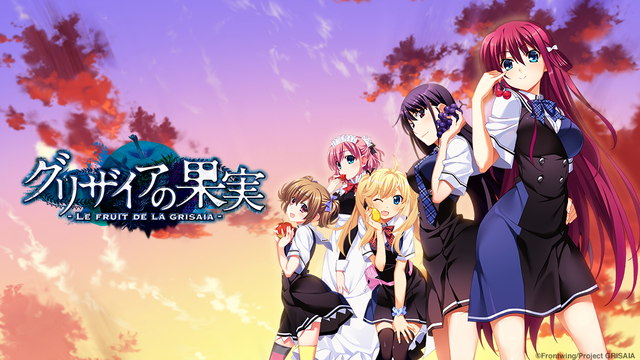 The Fruit of Grisaia is a great story. I was worried about the translation, as this is an adaptation of the original Japanese release, and the reason why is because Grisaia is a very different type of game than most visual novels you are likely to have read.

Grisaia is a very traditional VN. It’s light on choice, there’s little interactivity to speak of, and the gameplay boils down to clicking to advance the text and occasionally selecting a choice to change how the story plays out. There aren’t very many of those however, and in fact serve only as ways to transition onto the five pre-set paths the story can take, or “routes”. This leads into another way Grisaia is traditional: it centers around a school, the Mihama Private Academy. It’s a special school with unique students, ones that weren’t average in some way, so they were brought there to give them a somewhat normal life. An academy where they can go to school every morning and study along with their peers.

Each of the characters has a past that stops them from being normal, including Yuuji Kazami, the game’s protagonist. He is not a cardboard cut-out meant to represent the player like a lot of VN main characters; instead, he has a sarcastic and dry personality that’s pretty entertaining. He is, just like the girls that serve as romantic interests, a complete human character placed into an environment where he can try to be normal.

Yuuji is a mysterious character.

Mihama is a place where the students can just live their lives, until the time comes to confront their past. Each one has a darkness, such as suicide or the loss of family, in their past, demons that bear down on them each day. They came to escape those facets of their past, but as the story unfolds they have to face their issues and overcome them. This includes Yuuji, who tries to fight his own demons,  as well as learn more about himself from the girls he falls in love with through the different routes.

There are five women that can claim Yuuji’s affection, with who he chooses dictating which of the character-driven routes he ends up on. These five girls consist of Makina Irisu who is a bubbly, shy, and childlike girl; Amane Suou, who is pushy and overtly sexual; Sachi, who is the diligent, helpful, calm, class representative who wears a maid uniform whenever she can; Michiru, a self-proclaimed tsundere (a character who is mean and short-tempered, but is merely covering up a sensitive core); and Yumiko, who is cold and harsh, and for some reason wants to kill you. These general personalities only hide who these characters actually are, and a lot of it has to do with sadness in their past.

The Fruit of Grisaia is a heartfelt story about each of the girls, and Yuuji himself, overcoming their past. It’s a deeply emotional tale, and one that’s hard to speak much about without spoiling. There are multiple endings for each route, usually boiling down to “good” or “bad,” reached by making the proper decision when it’s presented to you. It is a story about how six people have come to a special school, because they were deprived of the chance to be normal due to various circumstances.

Unfortunately, the story struggles in its early hours. Grisaia is extremely long, and can easily suck about fifty or more hours of your time if you want to pursue every route. While it gets very interesting later on, the “common route” (the part of the game every player will experience at the beginning) is very tedious. This opening introduces all of the major characters, and moves at an incredibly slow pace. It also dangles Grisaia’s mysteries over your head, constantly hinting at a bigger picture without actually revealing anything.

During this time, the game has no focus. It’s just a series of events with little to no connection to an overarching plot or even the characters themselves. There’s little time spent delving into characters’ personalities, and you could easily cut out large amounts of it without noticing scenes were gone. The Fruit of Grisaia quickly establishes all of the characters, then spends the next ten hours saying little of any interest. It’s only towards the end of it that events of any importance start happening, and by then you are moving onto the routes.

There are some really funny scenes framed this way.

This isn’t just an issue for the common route either. In fact, even during the routes, when focus has been shifted onto a single character, there’s still a great deal of fluff to wade through. Not all of this padding is bad, some of these scenes can actually be really entertaining, endearing, or funny. The issue is that because there’s such an overwhelming number of them, Grisaia often comes off as unfocused. This is especially true of the beginning, where these scenes commonly don’t say anything of real substance.

That’s less of an issue than how slowly Grisaia explores its mysteries that are only hinted at throughout the common route. Even when you’re on the isolated tales that are the routes, the mysteries still take a fairly long time to be resolved, and it takes dozens of hours just to ascertain how this school you’re attending came to be. This level of pacing can be downright boring and cause a loss of interest easily.

Luckily, it’s really easy to forget about the pacing issues once you get close to the end of the common route. The jokes are funnier because you have a better understanding of the characters, and the emotional scenes start to come at a more frequent pace to keep things interesting. Even if Grisaia can get dull at times, there’s always something of quality ahead if you can push through it, and there’s always some piece of the story to be unveiled with patience. This is especially true of the routes, which are character stories that center around the romance between Yuuji Kazami and the girls he is able to pursue.

This version of the game removes a lot of adult content from the original Japanese version; however, I’m rather happy with the job Sekai Project did, as Grisaia is still very much a game for adults. There’s plenty of lewd humor and sexual themes here, but it’s all a part of the story that was meant to be told, rather than containing a lot of the unnecessary stuff from the original. The censorship here is quite light, and it’s clear the objective was to not tone down the original story, a problem that pervades translations such as these. It preserves the tale in its original form while making it more accessible to a wider audience, removing scenes which can sometimes prove disruptive to the experience, and resulting in a minor improvement overall.

While the most important part of a visual novel is its storytelling,  presentation is also important. The Fruit of Grisaia has anime-style artwork and plenty of music to compliment each scene. There are some good still-shots when the game wants to sell a certain moment. The music also sets the mood properly when it really needs to, especially during the most emotional moments in the story.

There are some very good looking still-shots.

The music and art share more than just quality aspects though, as both can get quite repetitive. The constant re-use of backgrounds is easy to explain because most of Grisaia takes place in and around the same location. The music isn’t as easy to make go away however, as it can start to seem like the same music track announces the beginning of every new scene. It contributes to helping the most boring parts of Grisaia that much harder to deal with.

The Fruit of Grisaia can feel drawn out at times. It can be slow at getting to the point, but when it delivers, it delivers well with an emotional gut punch. I laughed, I cried, and I connected with the characters. That’s what makes a great story, and that’s why Grisaia is an awesome visual novel.

The Fruit of Grisaia

The Fruit of Grisaia is a great visual novel. Although it’s somewhat marred by pacing issues, the high moments of story are more than enough to make you forget all about them.

My name is Niko, I'm currently 20 years old. I spend most of my time on my computer gaming as I got hooked on videos games from a young age. While my first experience with video games was with the Gameboy Color, I first got seriously into games while using the original Dreamcast and the PlayStation 1. I played many games back then, but the highlights were definitely Pitfall 3D, Pokemon Blue, Rayman 2, and Ecco the Dolphin Defender of the Future. All games that I spent many many hours on and filled the long hours where I stayed at home mostly by myself thanks to living in unsavory neighborhoods. From then on, I pursued a lot of video game consoles. I was particularly enthralled with the Super Nintendo and Nintendo 64. As I grew up further, my tastes shifted and I tried more and more games, especially after I got a PC. My first experience with a PC RPG was Star Wars Knights of the Old Republic, and it was really the game that made games an integral part of my life. I played video games a lot back then, but ever since playing KOTOR I've been a lot more opinionated and interested in games. I even entertained the idea of wanting to be a developer at multiple points, but I just didn't have the skillset. Still, KOTOR ignited my interest in video games as a way of telling stories. I loved the ways video games could tell such large and complex stories, combining the best parts of every other medium of entertainment with the unique pieces of what video games themselves offered. Now, my favorite genre is definitely RPG's. With my primary interest being the story driven ones. Though, I still enjoy my occasional shooter and action titles I enjoy mostly great cinematic titles with good stories. Though I also enjoy the Stealth, Strategy, and Action-Adventure genres quite a bit. I also think that the PC is a wildly superior platform to any console, due to the wide variety of options. Whether it be in graphics, mods, or the selection of games themselves.
Related Articles: The Fruit of Grisaia
Share
Tweet
Share
Submit