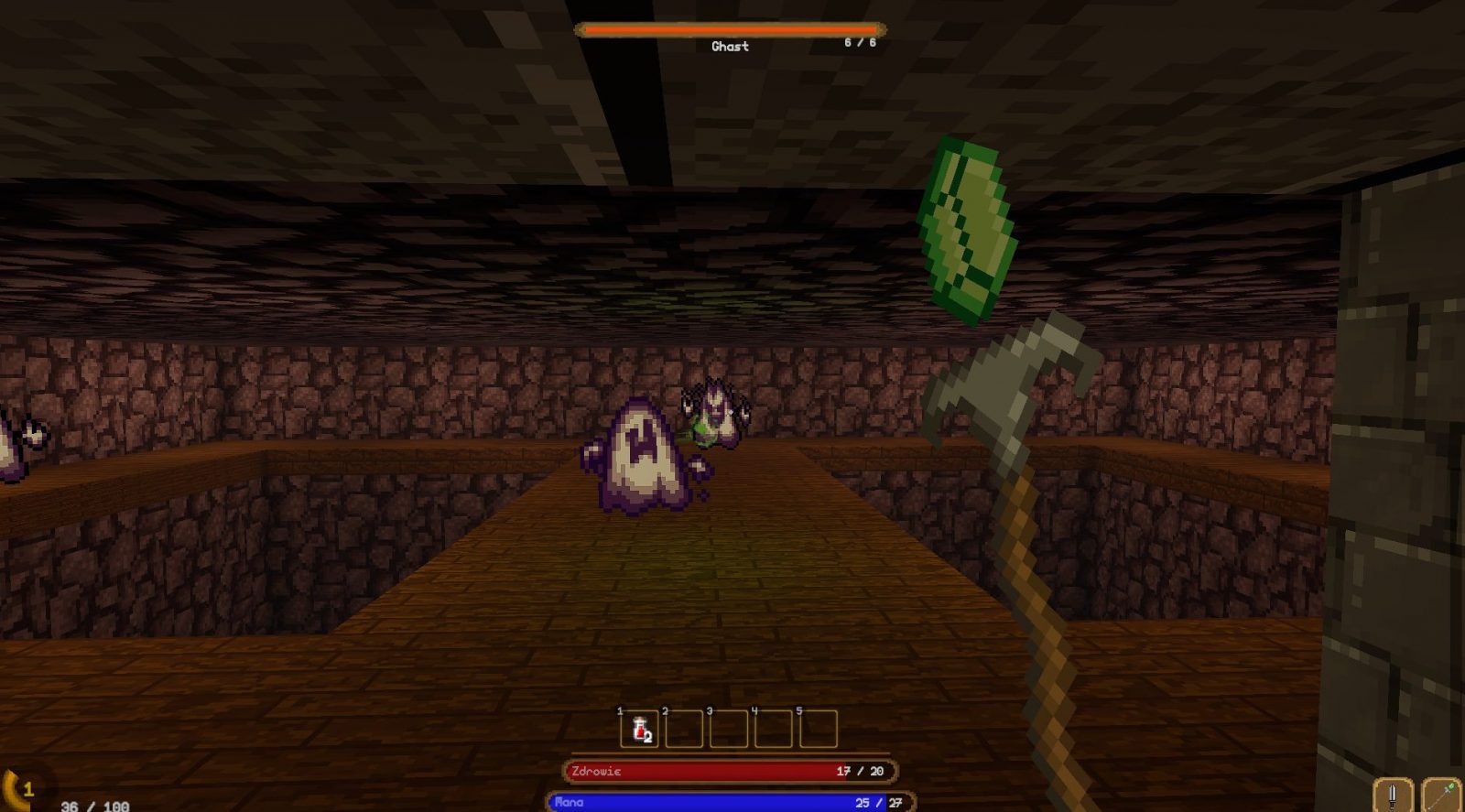 Games today are often heavily marketed and developed with cutting-edge visuals and advanced graphics; and who can blame them? Playing a game in 4K in a world that feels close to the real thing is the natural progression of video games. But there’s something about getting back to the basics of gaming, where gameplay and imagination led the design of many games, and Pangeon is looking to capture that magic. A roguelike single-player game with an RPG twist: it drops you underground, inside of a dungeon. You have two tasks: clear the dungeon of all enemies and escape. But to say that Pangeon successfully captured the best aspects of classic roguelike games would be a far-fetched statement.

As someone who first started gaming in the late 80s, I can recall vividly what it was like to play what we call classic games. To see Skrypious, the developers of Pangeon attempt to capture what made those early games great is a mixed bag for me, because it takes more than pixelated graphics, a maze of tunnels, and basic combat to be successful. 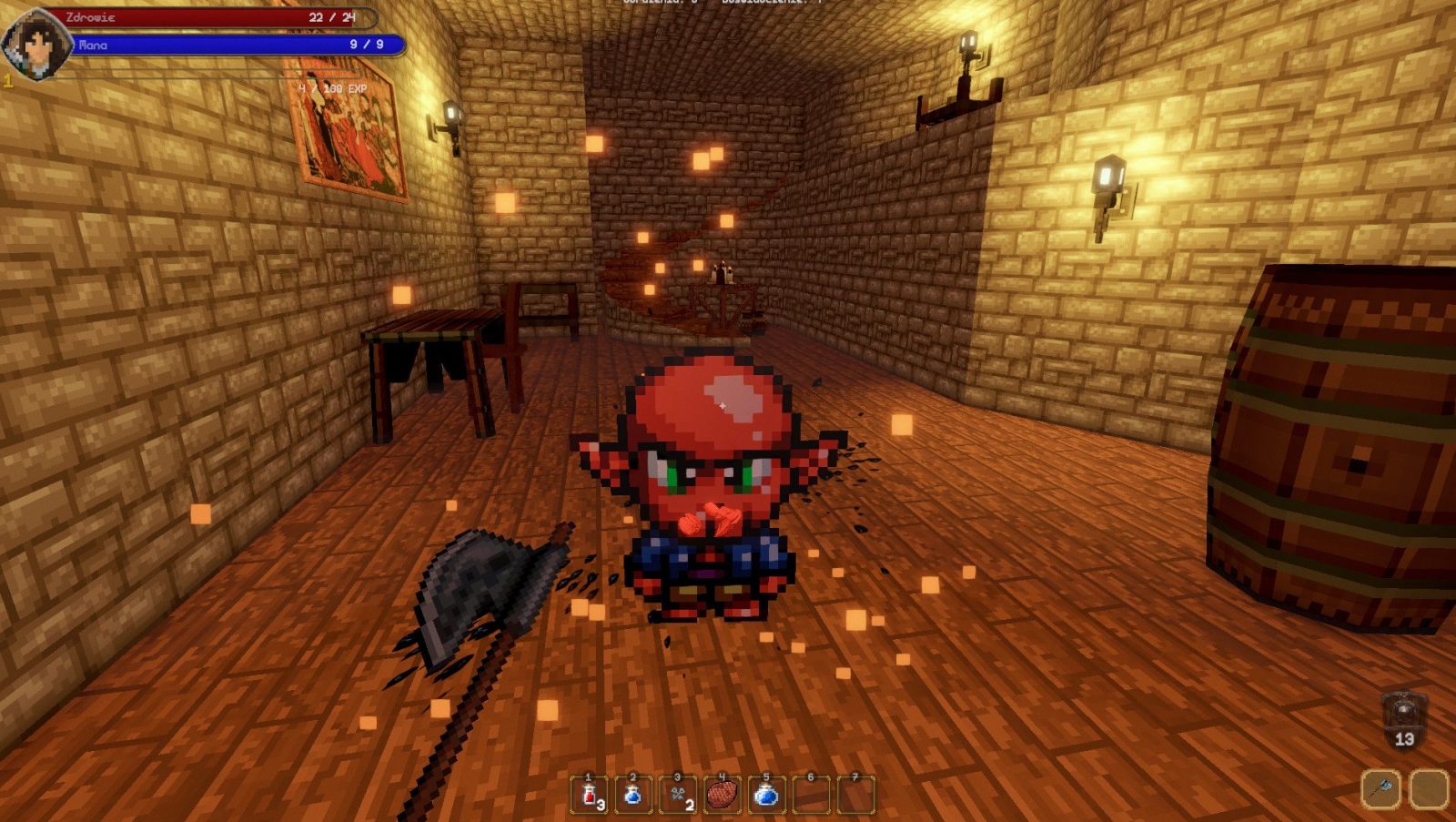 swing for the fences

Pangeon starts with you choosing from four different characters: the wizard, thief, archer, and warrior. Each character is supposed to have their own abilities, skills, and tailored stats, but depending on your weapon choice, that’ll ring true or all the characters will play the same. You see, it’s the weapons they use that set them apart. After choosing the character that will venture down into the dungeons, you are given five free stat points to use to increase your strength, health, mana, dexterity, and luck. Depending on which character you choose, those stats will be inherently different. Since I chose the wizard for my first playthrough, I chose to boost my health and mana to start the game. Because the wizard’s abilities use mana, it’s always smart to keep one of your two main weapons a magical staff. Without it, you’ll find yourself with no special abilities to set yourself apart from the other characters.

After upgrading the stats, I was dropped into a locked room with no story to go off and no directions. Approaching the door, I was given the message that I must acquire ‘EQ’. After wandering around the room, I approached what looked to be a chest and received a message to press ‘E’ to retrieve EQ. Apparently, EQ stands for equipment. Once retrieved, I received a tiny message in the bottom left of the screen telling me I had new items in my EQ, but I was left wondering how to access it. I then received a pop-up that told me to use LMB to attack, hold LMB to strong attack, and RMB to block. I could easily assume that what I received were my weapons, but why not tell me this? Eventually, I found that pressing ‘I’ opened my inventory, and this is where I could equip weapons, armor, and apply stat points. 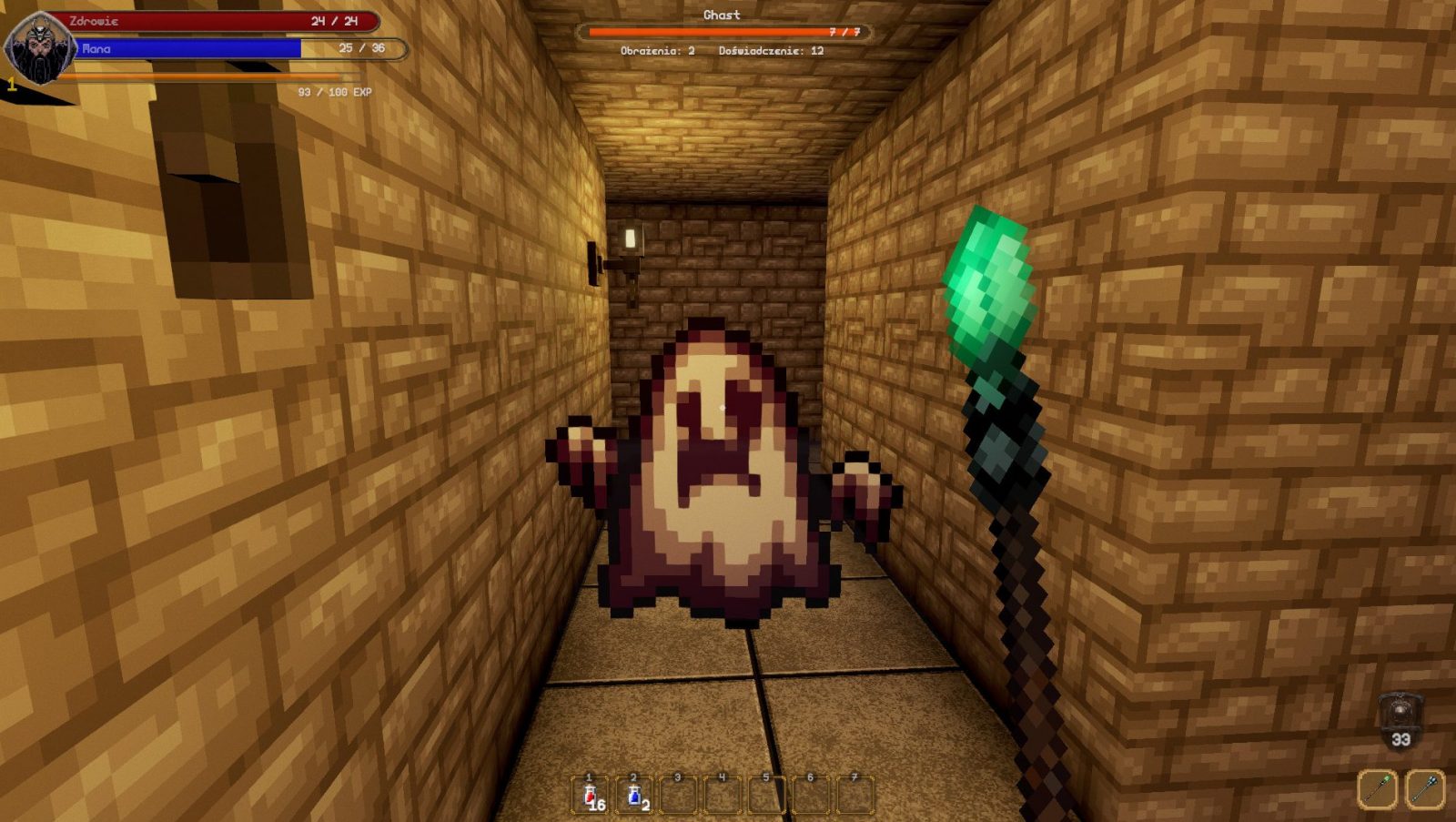 Ghost in the closet

Unfortunately, this is how Pangeon goes about introducing new mechanics, weapons, and telling its story. Vagueness plagues the game, from locating shops, learning about the story, and understanding when you have stat points to spend. When opening the inventory, if the highlighted item is at the bottom of your list, the description window will be displayed offscreen and not to the left or right for you to see. These oversights make the game feel as if it’s unpolished, unfinished, and waiting for game testers to give their feedback on what works and what doesn’t. Using the scroll wheel on the mouse swaps your primary and secondary weapons. Not only is it difficult to do, but it also points out the lack of refinement when using an item in the inventory. God forbid you click in the box of the item you want to use; you must click exactly on the item you want in your inventory for it to use the item. It also doesn’t help that the game doesn’t pause when you enter your equipment menu to select an item. Yes, you can hotkey certain items to a number box shown on-screen, but the game should pause when entering your equipment menu or at least have an easier quick select menu.

Exiting the room, I found the level design mediocre at best, lacking any continuity and design that creates the dungeon crawler experience. Though the tunnels can split off into different directions, taking you to smaller rooms where goblins, skeletons, blobs of goo, or pumpkins wait to attack, it never feels as if there was a plan as to how it all works together. As I moved about the tunnels, breaking barrels and looking for health items, I fell through the level into the dark void that is nothingness, only to be forced to restart the game by CTRL+ALT+DEL. This was something that should have never happened. I was able to recreate this by going back to the same area where I broke open a barrel, so there definitely is a lack of quality control with this game. Once back into the game, I was forced to gather my EQ again and start over, as there are no saves in between completing the levels. 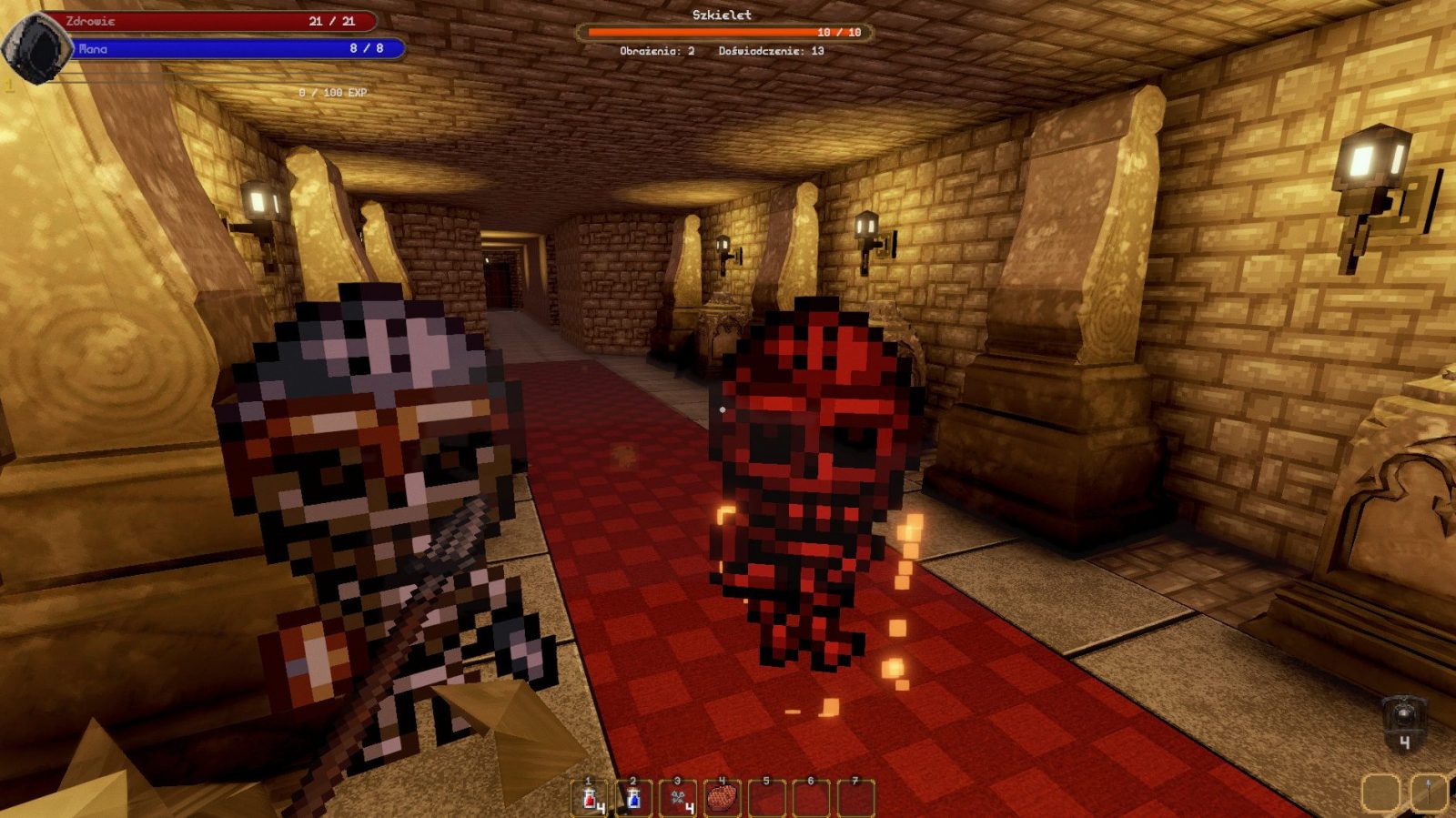 More than skeletons in the closet

Once I gathered health and mana potions again, I found that encountering enemies is a lose-lose situation, especially when using melee weapons. As you deal damage to an enemy, there’s no way of not getting hit when you go on the offensive, regardless of who attacked first; although you can block incoming attacks, they still take health. The hitbox detection is horrid in the game, especially when trying to avoid enemies. With melee weapons, you can hit an enemy that’s not even in your vicinity, but coincidentally, the enemies can hit you through walls and doors. I even had a goblin walk through a table and corner me, killing me and sending me back to the ‘escape room’ that is the beginning of the level. I found using my staff and firing projectiles at enemies from afar is the best way of dealing with the obnoxious enemies, especially those that can fire projectiles at you.

The boss battles at the end of the extremely short levels were cheesy at best, only being difficult because they used magic projectiles. Using projectiles, whether it’s the wizard’s staff or a bow and arrow, is the best way to counter when fighting a boss. Unfortunately, figuring this out made the game not worth playing, because I could kill any enemy from afar. To make things worse, oftentimes the boss can kill you with a single hit, using an attack that hits you from across the room. And when it’s all said and done, when you have vanquished the enemies, cleared out all evil in the dungeons, you are met with a door that simply ends the game when you enter. Oddly enough, the way the game ends is fitting to the experience I had when I played through three times. 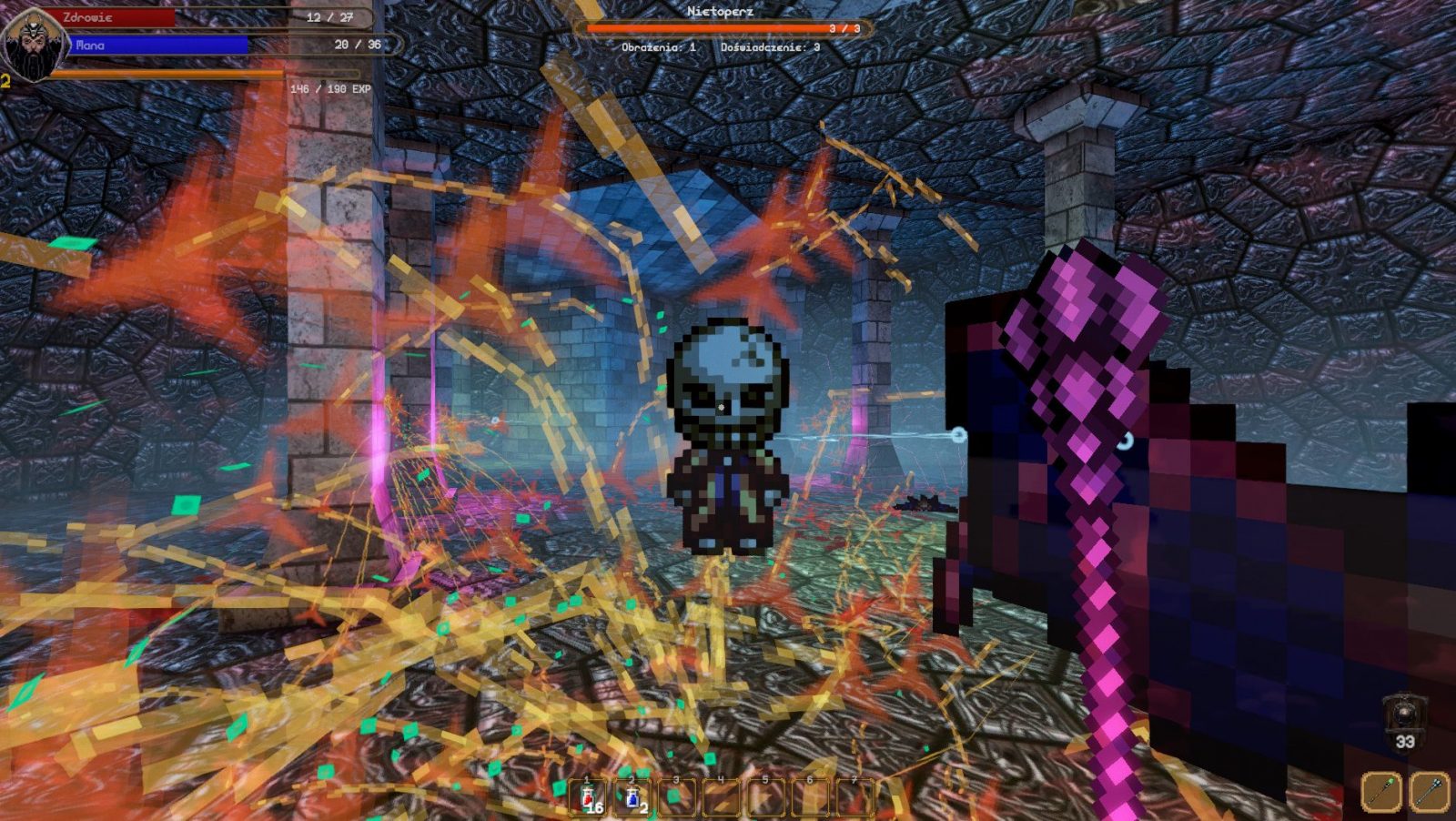 Pangeon is simply a bad attempt at trying to capture the nostalgic feel of a classic dungeon crawler. With its lack of attention to detail, gameplay continuity to give confidence to the player, and a design that feels incomplete and uninspired, it struggled to keep my attention.

T.K. is a freelance writer, narrative designer, and author. Writing and developing narratives and giving voices to digital world and characters is his passion. As a game writer, QA game analyst, and editor for Gaming Trend, he enjoys being a part of the gaming industry.
Related Articles: Indies, Pangeon
Share
Tweet
Share
Submit