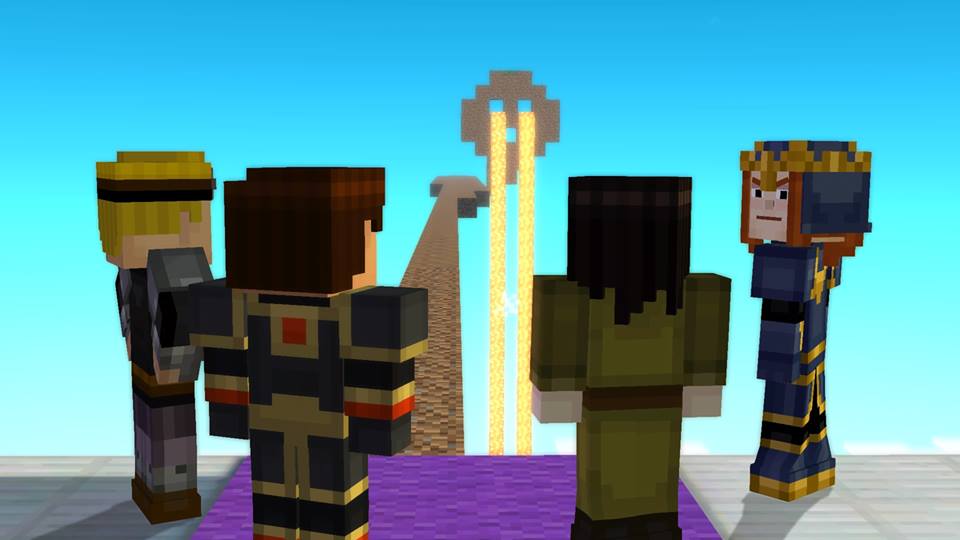 One has to wonder what form Minecraft: Story Mode’s fifth episode would have taken had the series not been expanded into an eight-part series, because “Order Up!” doesn’t feel at all like it was meant to originally be a finale, but rather a beginning of something brand new and altogether more compelling than the extended origin story that came before it.

“Order Up!” begins after Jesse and company have taken up the mantle as the new Order of the Stone. The group now spends their time exploring the world in search of rare treasures and grand adventure, putting them in the crosshairs of a rival team who kickstarts a race to find a mysterious treasure called the Eversource, said to be able to create any building material its holder desires.

The events of “Order Up!” play out more like a standalone story, as if it’s one of the many adventures the Order of the Stone will embark upon in future episodes. As such, the episode is lengthy but also feels concise. There’s little mention of events from the first four episodes of Story Mode, and it means the series feels like it’s in a place where it has another chance to define what it’s about.

By shifting to a standalone story structure, future episodes of Minecraft: Story Mode may not fall into the same pitfalls as the first half of the season, specifically the loosely connected narrative tissue that held together trips to every corner of the Minecraft universe. Jesse and the rest of the Order of the Stone could now, in theory, go anywhere in this world with good cause, and the story will no longer have to make great leaps to get there if it keeps up the format.

Some characters also benefit from the shift in direction, such as ex-villain Ivor, who takes on the role of comic relief more effectively than any of the inconsistent members of the cast ever did. But perhaps most notably, players get a chance to really define who Jesse is in a more profound way than most Telltale games often do.

As leader of the Order of the Stone, Jesse is given the power to act as he sees fit when it comes to choices like apprehending criminals and advising leaders of the communities they help. Because “Order Up!” finishes telling its well-contained story by the time the credits roll, it’s unlikely that the consequences of these actions will be seen in future episodes, but it still does a lot to let players define their personal version of Jesse, something that has been a weak point in Telltale’s past games that made efforts to box characters into predetermined roles.

When Minecraft: Story Mode has been at its worst, I’d thought of it as a childish waste of Telltale’s talent and time, but even when Minecraft: Story Mode was at its best it never reached the heights of something like Tales from the Borderlands or The Wolf Among Us. However, “Order Up!” has put the series on a path that isn’t really comparable to anything else the studio has done, and it has in a way helped to bring new life into what I would have deemed a lost cause after episode three.

Minecraft: Story Mode settles into a new identity and story with "Order Up!," one that isn't beholden to past mistakes.