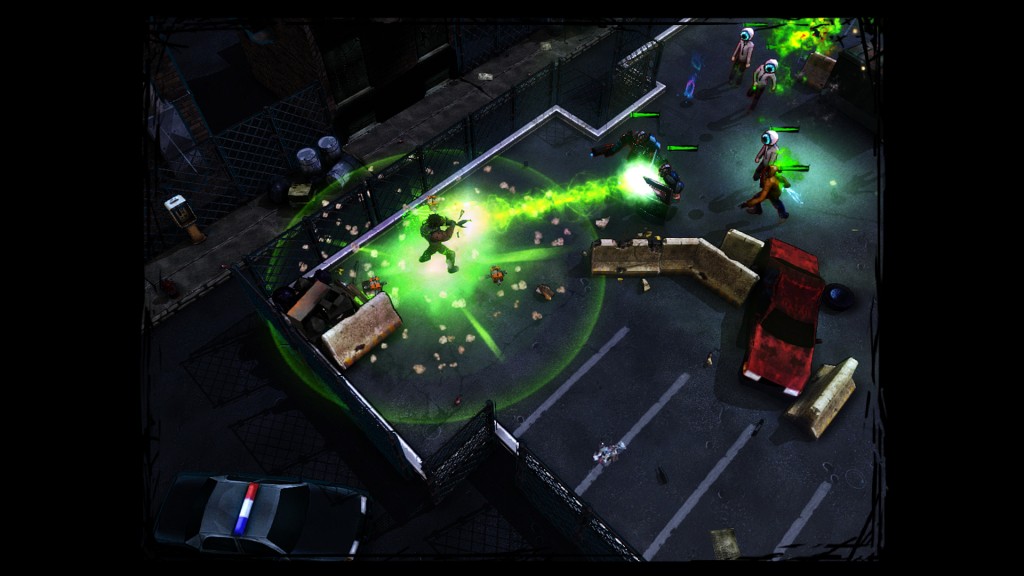 Once a niche genre, roguelike games are now ubiquitous on Steam – and it’s becoming harder and harder for any one to stand out from the pack. Leap of Fate by Clever-Plays tries hard to do exactly that, mixing isolated single-level challenges with an unlock system, dynamic skill generation, and a Shadowrun-esque cyberpunk theme. While the game suffers from a sense of repetition after repeated playthroughs, the whole package is polished and fun enough to help ensure those repeated playthroughs will actually take place. The result is a title that feels well worth its 15 buck USD Steam retail price – complete with 4 different players, a wide variety of skills and abilities, and just enough challenging gameplay to earn its keep as a roguelike title.

Leap of Fate is an action game, feeling a lot closer to Binding of Isaac in many ways, though with an isometric perspective and a 3D world. Setting itself in a futuristic New York awash with magic, high tech and secret societies, the game immediately stands out just for being a roguelike title that isn’t working the swords and magic angle. Better still, while the story’s actually interesting, it’s the resulting environments that really manage to catch the eye throughout. Shadowrun is the obvious and already-made comparison on this front, but the actual feel of the game’s world is closer to Shin Megami Tensei or the Persona series. Think ‘dark, threatening cities and a mix of high-tech and creepy demonic enemies’ and you’ve got a good idea of what kind of world Leap of Fate presents. It’s a diversion from the norm for this genre, and a welcome one. The only negative point on this front is that the graphics, while unique, seem a bit low-res at times. Not at all a deal breaker, nor even an immersion breaker, but the creativity of the world left me wishing for more detail.

Levels, while small, still provide a lot of action, challenge, and the ability to blow up enemies who look like The Residents.

The gameplay itself is solid as well. This is a shooter style game, once again conjuring up the Binding of Isaac visions, complete with the ‘room by room’ crawl aspect being central. Enemies will attack with either melee or ranged assaults, complete with patterns and ‘tells’ that give you a heads up on what’s coming. Their patterns feel polished, as does the weight of each encounter – with challenge difficulty primarily coming in the form of special conditions (defeat everything in time!, etc) or by sheer volume of enemies. There are four classes to play in the game, three of them requiring unlocks, and all of which have a different potential arsenal of skills a their disposal. In the main, however, a given character will rely on one basic attack and two charge-based alternate attacks. These ability charges are hard to come by, so the emphasis here is heavily on making sure you’re adept with your basic run and gun abilities, while not being afraid to rely on a special move when things get dicey. In true roguelike form, death in Leap of Fate means starting over again – though it’s less painful here than in other games. Unlocks that add variety and different characters remain through each playthrough, granting a sense of progression regardless of the sudden end.

Levels are laid out in the style of a card deck pyramid, starting at the top point and moving down. Each card presents a given challenge or opportunity, with the card face indicating the level of difficulty and/or the sort of reward offered to the player for choosing it. Selecting any given card reveals the adjacent lower cards beneath it – making the experience a bit like exploring random rooms in a dungeon, without the need to walk through hallways. While this is a pretty cool way of presenting challenges, a sense of repetition starts to settle in after a few playthroughs, with most of the cards being a variation on ‘instant reward’, ‘skill enhanced this playthrough’ or ‘kill every enemy in this level’. While the challenges and even the enemies become familiar, the fun of working through them remains consistent. Leap of Fate manages to feel appropriately polished, where getting lazy or inattentive is bound to lead to some fast comeuppance.

Every cyberpunkish game needs an overly garish gold-plastered environment to set things on fire in.

Another twist that Leap of Fate has on the normal roguelike formula is the loot: namely, the lack of it. In lieu of finding and equipping gear to your character, you’ll find upgrades in the form of largely passive skill enhancements. These can show up at times in any given ‘dungeon’ of cards, and need to be purchased from currency gathered by clearing dungeons or making particularly impressive kills with environments or magic. The game boasts over a hundred of these skills, with the actual tree layout changing per playthrough. As a veteran roguelike player, I found myself missing straight-up gear upgrades – but the skill enhancements were a welcome replacement. Really, half of the fun of getting new gear is finding pieces that augment skill, so this system just cuts out the middleman.

Ultimately, Leap of Fate provides a great experience for gamers who are looking for more action-roguelike satisfaction, especially ones eager to shoot and slaughter in a new and fresh-feeling environment. While a little more variety in enemies and challenges would be nice to have in the cards, it’s more than worth its price tag as it stands, offering a fun time with a good share of replay value to keep players coming back for more.

Leap of Fate mixes dynamic, level-based action with a unique cyberpunk/Shadowrun-esque setting, resulting in a solid title that stands out in both gameplay and environment. It's a fun, well-balanced game limited largely by a lack of variety in enemies and challenge types - which most players will be guaranteed to notice, because it's still entertaining enough to play again and again.

Victor Grunn has been a gamer since the days of single-button joysticks and the Atari 800XL. When not lamenting the loss of the Ultima series or setting people on fire in Team Fortress 2, he's an aspiring indie game developer and freelance writer.
Related Articles: Leap of Fate
Share
Tweet
Share
Submit