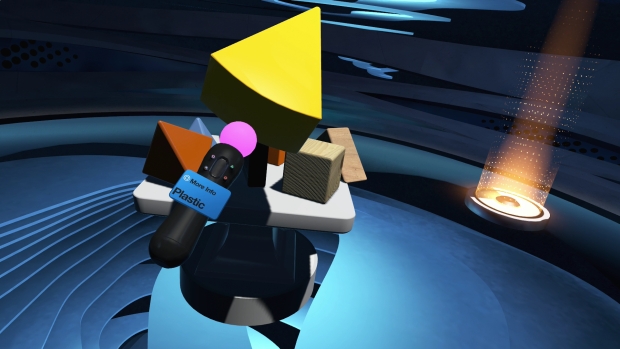 Many of the launch titles for PSVR could be classified as tech demos. Tumble VR is a notch above that moniker, but in a game about stacking blocks, how high could it possibly rise?

Tumble VR is essentially a number of Jenga-style puzzles performed in VR. Part physics simulator, part stacking puzzle, Tumble VR starts off simple and then throws in the kitchen sink to trip you up. Whether it’s a bar that swings back and forth, a cannon that fires in your path, or just the goal of trying to stack obtuse objects on the points of others, the rule of the day is always the same — stack it high, and do it fast.

Stack all the things!

There are over 70 puzzles in Tumble VR. Starting off with some easy block stacks focusing on height, the narrator walks you through an unskippable tutorial. A chirpy robot provides some chuckle-worthy moments, but just as many groan-worthy puns and fruitless attempts at helpfulness.

The biggest challenge in Tumble VR comes in the form of material differences. Certain objects like glass may be more slippery when placed on another surface, whereas rubber has an unsurprisingly springy quality. As you push further into the levels, these materials get more fussy and challenging, but it does make the elation of stacking them that much sweeter. Feedback is provided with the rumble features of your controller, which is fairly convincing and adds another layer of immersion.

Beyond stacking, there are also a few game types that will challenge your brain with angled mirrors to light up gems. Pushing this another layer, a more difficult version might then ask you to bounce it through colored glass to create specific colors. Trial and error rules the day, but it also creates a chance for some critical thought.

Making bridges out of silver

Another game type is one that asks you to create bridges. While this game is heavily based on physics, there are some interesting interpretations of those physics laws when building some of these bridge structures. While the stacking games focus on height, the bridge games focus on length. This small change in perspective provides some fun twists on what are otherwise fairly straightforward puzzles.

If there is one thing that I think Tumble VR does exceptionally well, it’s remaining flexible. Puzzles are graded bronze, silver, or gold depending on your height or length requirements, but nowhere in there is a specification on how you accomplish the task. There are a great many ways to stack things, and hitting the bare minimums lets you continue to the next puzzle. It never felt like I was stuck and couldn’t proceed. Coming back for another go at those levels introduces a time limit. Beating that gives you a target mode that asks you to stack in a more specific fashion. It’s all the same puzzles, so it doesn’t add a lot of variety, but it provides some new layers of challenge.

Since most players won’t have a spare VR headset (and I’m not sure that would even work), multiplayer or “Versus” mode is a little bit different than head-to-head action. The person with the PSVR does the same stacking and bridging activities they would in single player, while a second player uses a DualShock controller to try to stop them. To do so they can use fans to blow lighter objects off the play space, lasers to blast away more solid cubes, and a little zapper to try to knock away more precariously perched stacks. Frustratingly, all of the levels are locked behind completion of singleplayer levels. This means you’ll have to crank through dozens of levels on the off chance that you have friends that want to play.

Stupid bar knocked over my blocks!

Beyond the chirpy and somewhat annoying narrator, and the multiplayer that’s locked behind single player progress, the only real complaint I had with Tumble VR is that it is, by all accounts, a tech demo. Supermassive is only charging $9.99 for the game, but there’s not a lot of variety here. That said, it’s entirely safe, doesn’t cause nausea in any way, and lets literally anyone experience the fun of virtual reality without having to master complicated controls or complex movements.

If you’ve noticed that there’s little in here about how effective virtual reality works in Tumble VR, that’s somewhat on purpose. Tumble VR could easily work with any motion control game, and virtual reality doesn’t add much to the equation. It would work just as well in a 2D setting. It’s not an indictment to the product, but if you want a game to show off the power of VR, this isn’t it.

Simple and safe, Tumble VR provides a nausea-free virtual reality block stacking puzzle experience suitable for gamers and non-gamers alike. Intuitive and reasonably challenging, it should keep you busy for a few hours. Just don’t expect a lot of variety.

Ron Burke is the Editor in Chief for Gaming Trend. Currently living in Fort Worth, Texas, Ron is an old-school gamer who enjoys CRPGs, action/adventure, platformers, music games, and has recently gotten into tabletop gaming. Ron is also a fourth degree black belt, with a Master's rank in Matsumura Seito Shōrin-ryū, Moo Duk Kwan Tang Soo Do, Universal Tang Soo Do Alliance, and International Tang Soo Do Federation. He also holds ranks in several other styles in his search to be a well-rounded fighter. Ron has been married to Gaming Trend Editor, Laura Burke, for 21 years. They have three dogs - Pazuzu (Irish Terrier), Atë, and Calliope (both Australian Kelpie/Pit Bull mixes).
Related Articles: Tumble VR
Share
Tweet
Share
Submit