Begin your adventure, progress until you die, repeat until bored — that’s how I treated roguelites in the past. For some reason, they’ve never appealed to me, but for so many others they’re the genre of choice. Which makes Curse of the Dead Gods extra special; why did it stick out to me? Why am I suddenly interested in a game whose genre I typically dislike?

So let’s begin this adventure.

Following the opening cinematic, I’m thrust into a strange-looking dungeon. From what I can immediately gather, we’re a grave robber or treasure hunter that stumbled upon a large tomb, trapped inside with the only way out being to persevere forward. 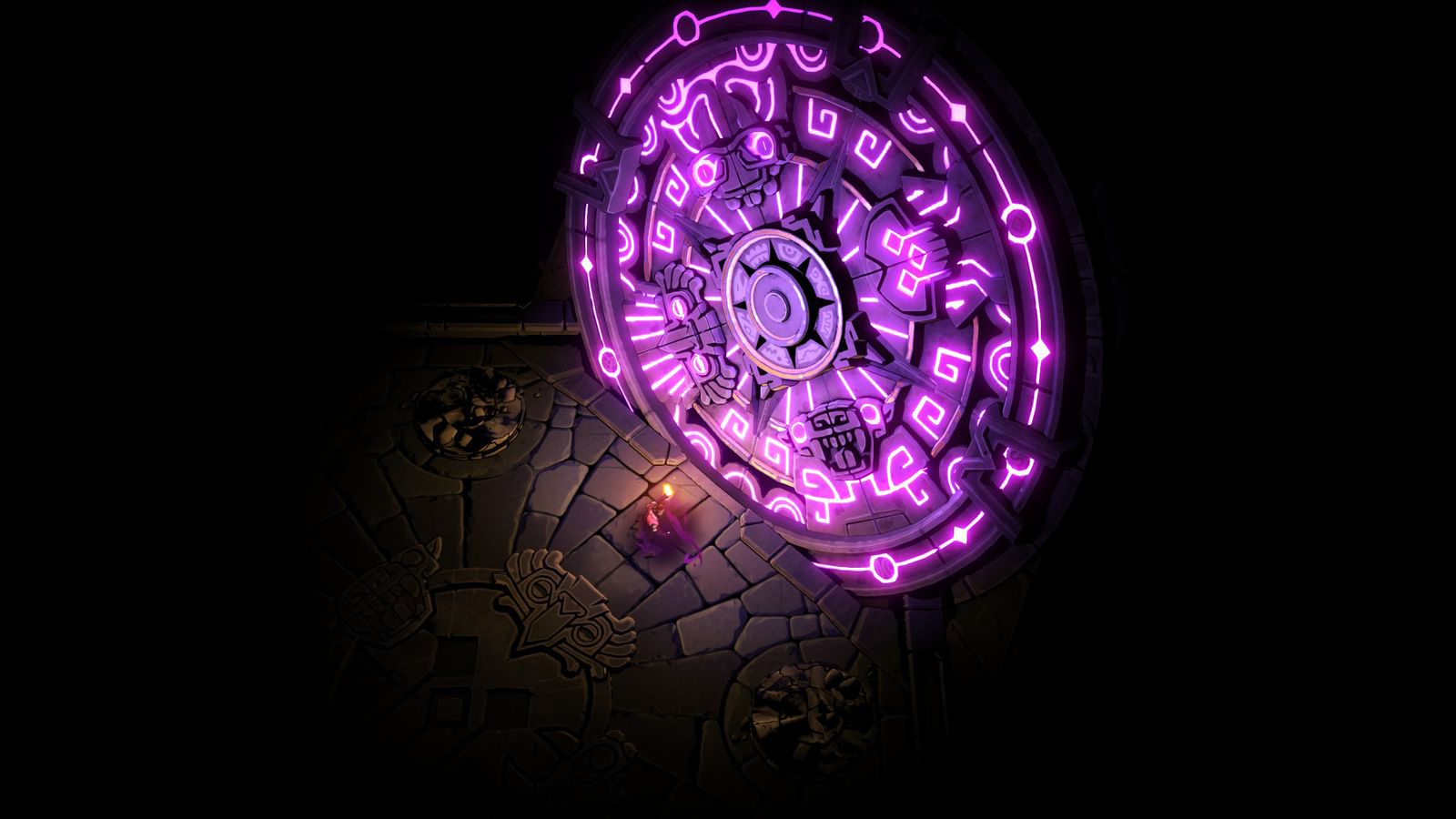 The first couple of minutes is a tutorial, teaching you what keybinds do what; what each pickup is for; how to dodge, attack, parry — the usual. On keyboard and mouse, movement is a bit clunky, so I switched to a controller and boy was that a game changer.

The first enemies out of the tutorial were tough, but after some rebinding I gathered my wits and took them down. Just as I was getting into the rhythm of things, killing enemies left and right, I gained corruption; a lot of corruption. Some attacks will deal health damage, but certain magical attacks will deal corruption damage. You also take corruption damage by going through doors at the end of each level. It’s very easy to gain, and by the time you realize it you’ve already received 100 corruption. At that point, you’ll gain a new effect, with either positive or negative consequences. And the one I received was that I suffer hallucinations whenever I take damage. 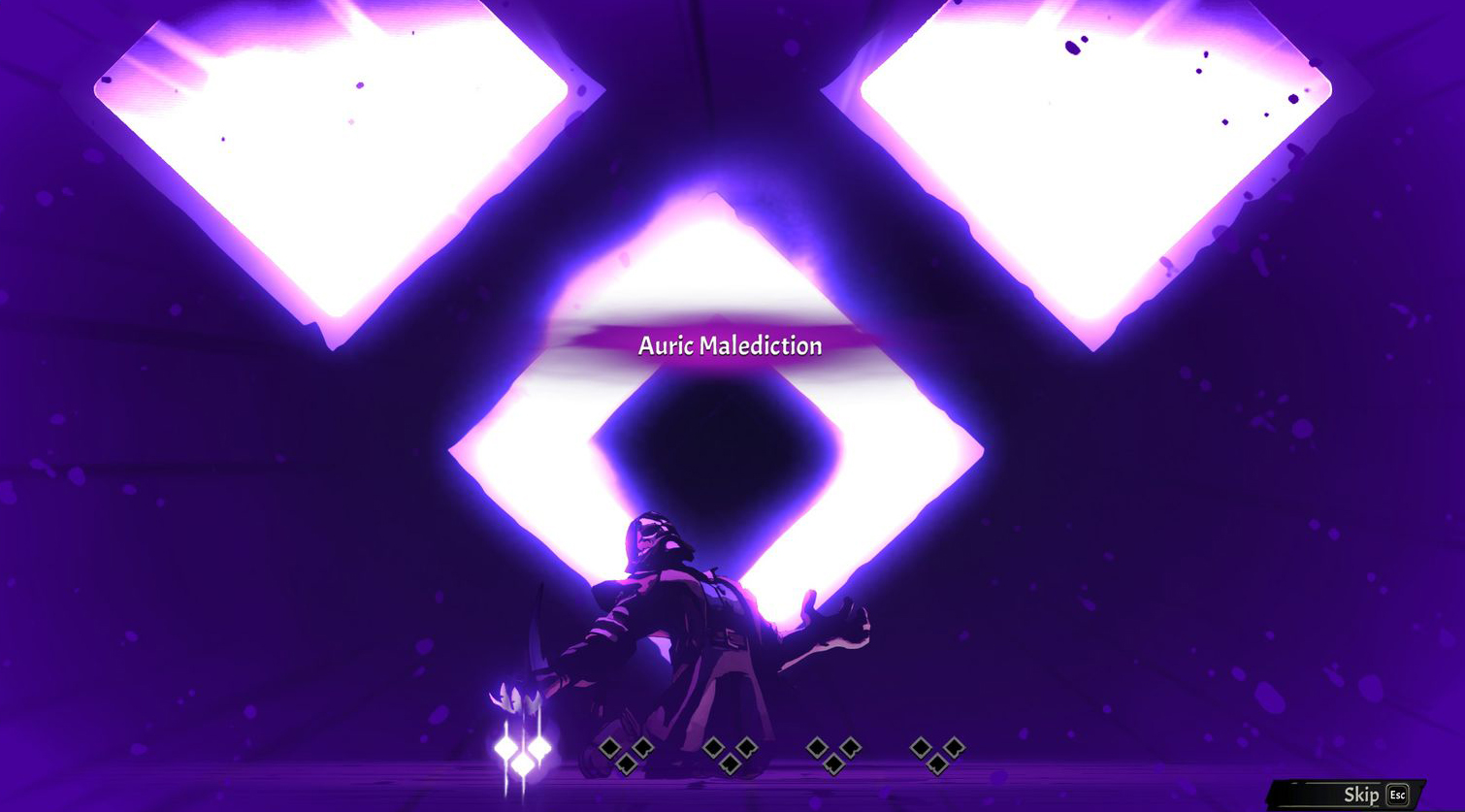 Plenty of curses to suffer

I struggled and stumbled through the dungeon. I kept gaining more and more corruption and more and more status effects. In particular, I picked up one that hides enemies if they’re shrouded in darkness and another one that causes killed enemies to explode after burning.

But goddamn it if I’m not stubborn — I won’t let any game beat me without a fight.

And lo and behold, I made it to the boss. After a bunch of procedurally generated dungeons, I finally made it. At this point I was below half health, had 4/5 curses — clearly underprepared. But I made it to the boss, and I was going to give it my all. And I did, right until I gained that last level of corruption. Just as the game initially warned, the rest of this life will be one of immense difficulty. If I wasn’t suffering before, this extra curse made sure I was. 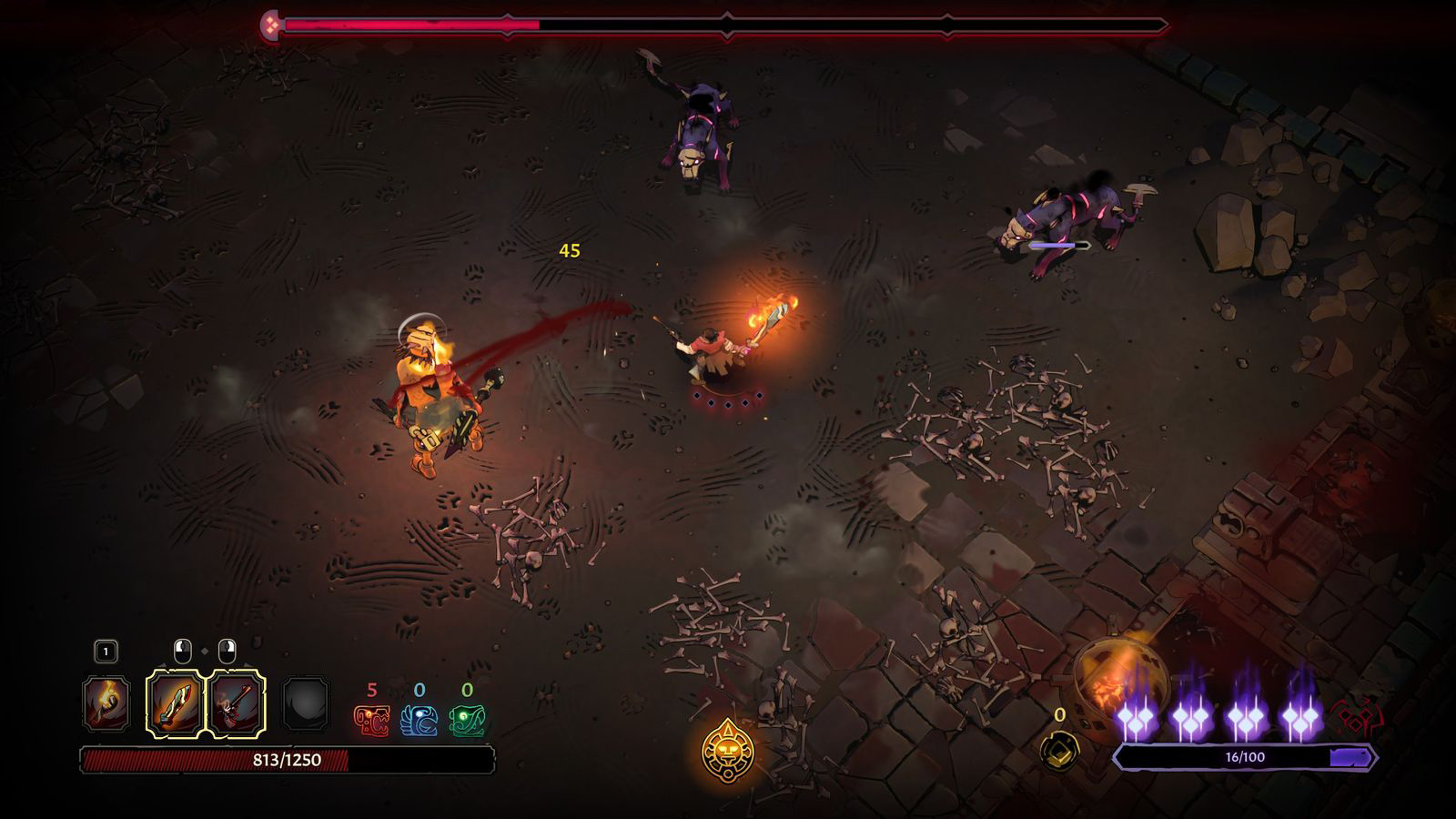 From the moment I received that curse, it took no less than a few seconds before I was wiped out. I put the controller down, sighed deeply, and walked away from my PC. I was done with this game. To go all that way, push through with the worst luck possible, to just fall short right at the end of the finishing line was… disheartening.

But then, a couple of hours later, I was back. This game was clearly special because at that point when I play roguelites I give up and never look back. But I couldn’t, I wouldn’t, so I kept playing. No matter how many times I died and failed to get closer to the boss, no matter how rotten my luck was on the map generation or dice rolls for corruption effects, I kept playing.

And then finally, the blessed run. 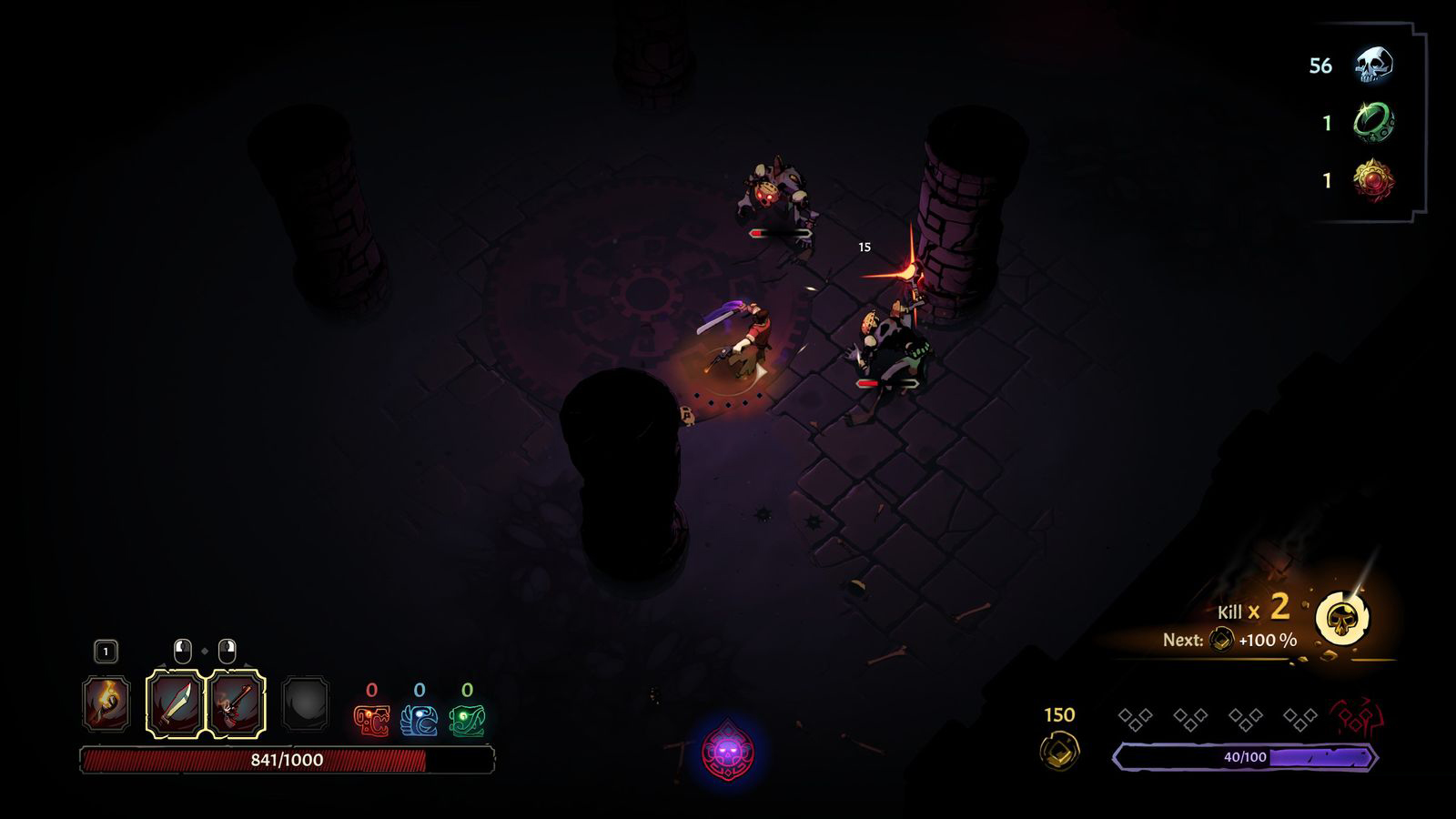 I finally understood the gameplay, the mechanics, and I was in the zone. By pure luck, every corruption effect I gained didn’t negatively affect my character or playthrough. And I made it, all the way to the boss. I was prepared, I had new and better skills that had transferred between runs, better weapons, better totems that gave my character damage and health bonuses, and a ton of health left over through the run. This boss didn’t stand a chance.

But, as it menacingly towered over me, I forgot how deadly this… thing was. The boss hit hard, and it hit me over, and over, and over. Then, I found my rhythm, I dodged his minions, and I parried his attacks. He had me down to about 150hp left, and he was around the same. It was a war, and I had to win.

And, with a quick dodge out of his attack, I drew my revolver and fired. Bang. He was defeated. I was victorious. 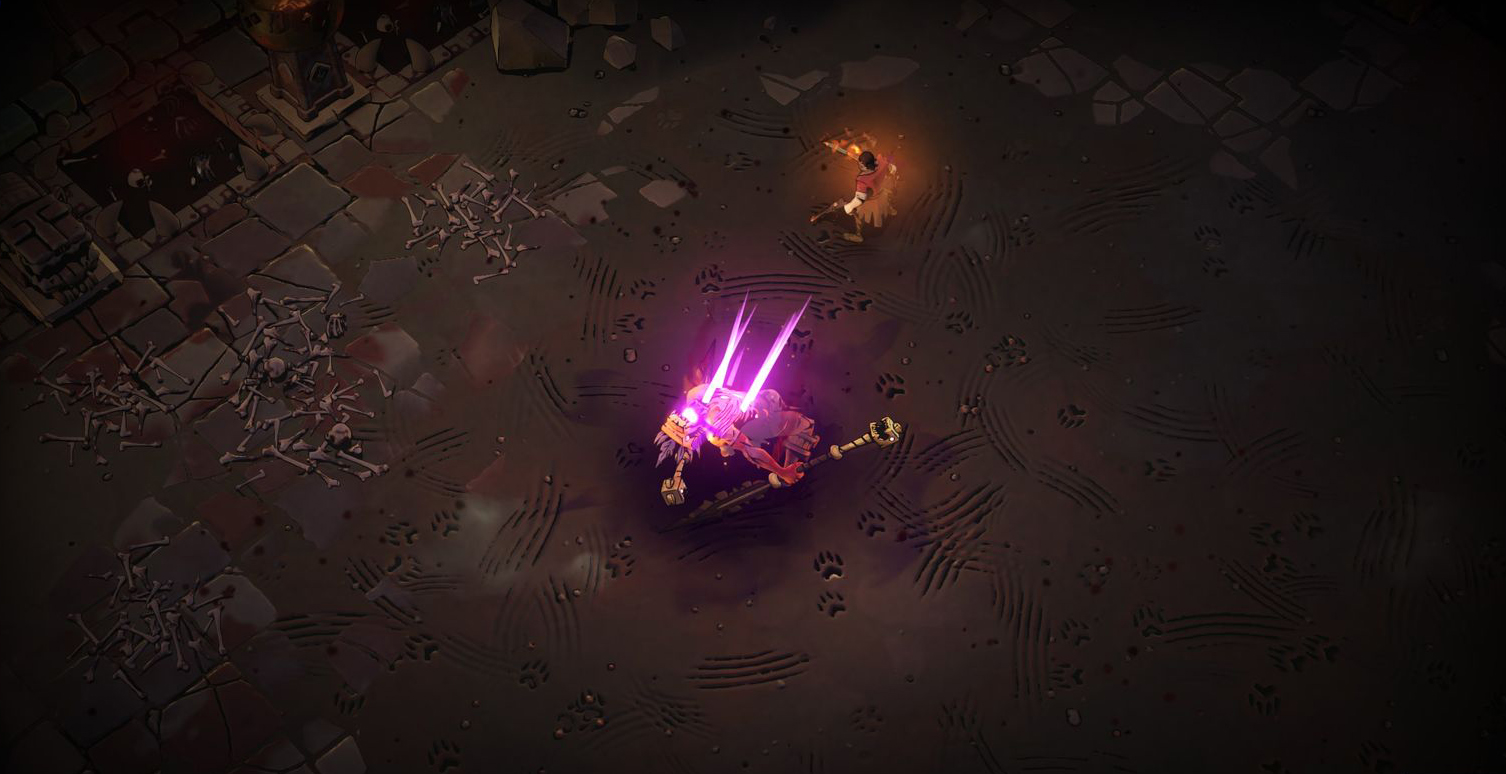 Curse of the Dead Gods is a war of attrition. It’s hard but well worth it. The enemies are relentless, the traps are unforgiving, and at times it’s a sensory overload. But, no matter what, the game is so damn fun. It’s hard not to love every moment in the game, and the level of satisfaction you’ll receive after clearing out a dungeon is incredible.

Now let’s get into the nitty-gritty stuff.

There’s a lot to deal with in this game. Of course, as I’ve touched on there are totems (always providing good status bonuses), corruption (providing either a positive or negative status bonus), and skills (which transfer between levels). As you’d expect with a roguelite there’s a lot of RNG. You’ll also pick up many different types of weapons for either your main, secondary, or two-handed attacks. Main attacks are typically close-ranged, secondary is long-ranged, and two-handed is for crowd control. You can also combo attacks together for massive damage. However, since you’re limited to 5 stamina points (unless you luck out on upgrades), you’re rather limited. Charged attacks on your main weapon, all secondary attacks, and all two-handed attacks consume 1 stamina point. So, if you’re low stamina you’re stuffed. There’s a lot of multitasking to do between juggling your stamina points, enemy attacks, traps, and dealing damage. 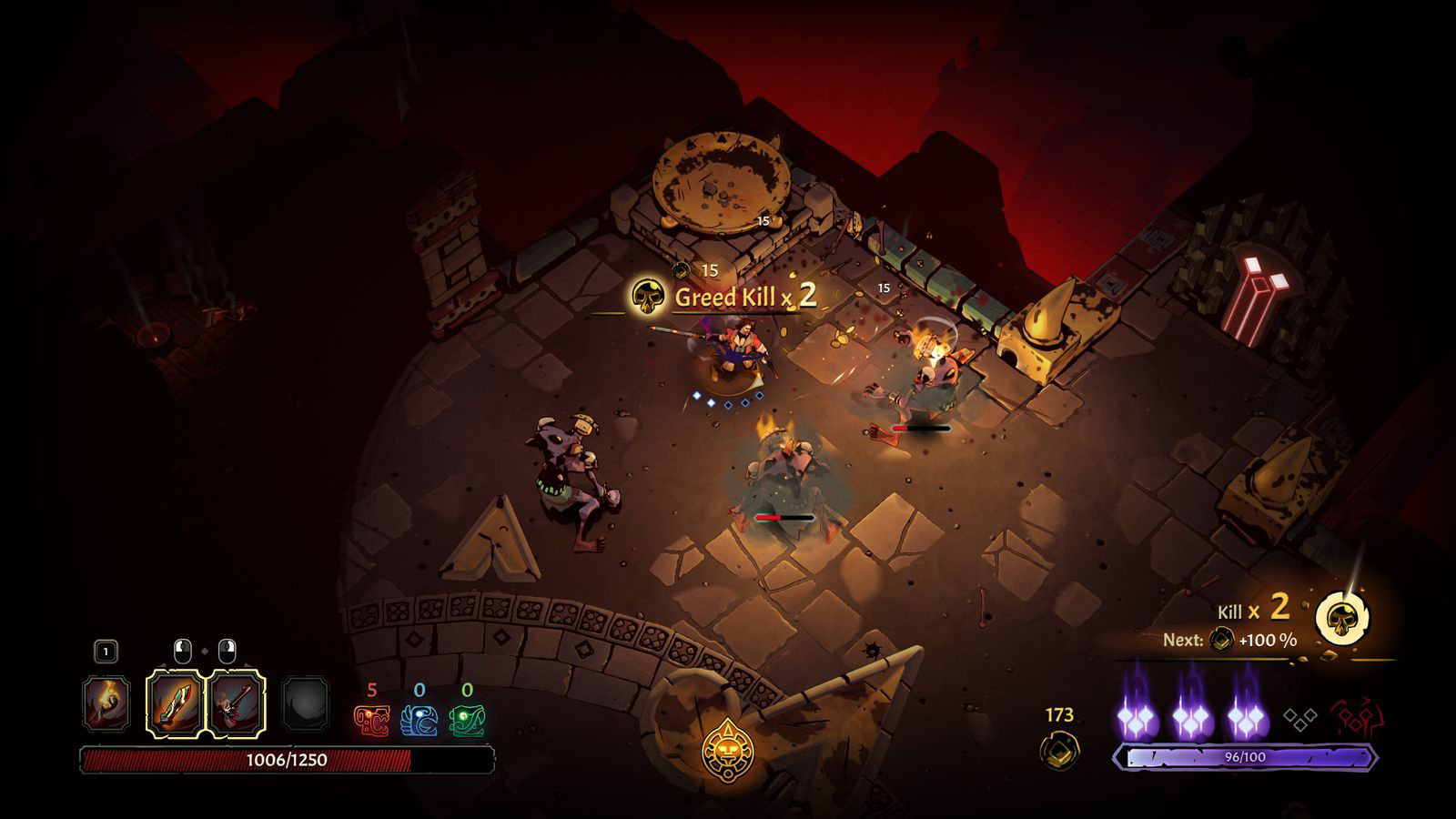 As grindy as this game is, it’s insanely fun and rewarding

Thankfully, enemies very clearly telegraph their attacks so dodging is very easy. If you time it just as the attack is about to land you can also land a perfect dodge and regain one stamina point. You can also parry, and a successful parry will stagger an opponent. However, parries are very hard to land, requiring nearly frame-perfect timing. You can also land a perfect ranged attack, and timed right you’ll deal hefty damage to your enemies.

However, there’s one massive gripe I have with this game; there’s no story, no real endgame. Effectively, your only purpose is to complete dungeons until you finish the game. That’s it. For some that will be a major turn-off, because they may find the gameplay quickly become repetitive. Coupled with the fact that you’re limited to taking 3 skills per dungeon run, and given that there’s only about a handful of skills that are really worth it, there’s no real endgame — nothing really worth unlocking. Nevertheless, the gameplay provides such an amazing experience that there’s still plenty of fun to be had.

Curse of the Dead Gods is an amazing game, with the only real downside being that there isn’t a tangible endgame. But, nonetheless, that is largely overshadowed by the fun and challenging gameplay that will have you locked in your seat for hours on end. The level of satisfaction you’ll receive after killing a boss is well worth the hours of grinding it might take to get there.

Curse of the Dead Gods

Curse of the Dead Gods is fantastic. The gameplay, while incredibly challenging, is still fun and immensely rewarding. It's so satisfying to finally complete a dungeon after spending hours grinding there. It's a roguelite in nearly the best sense of the word, with the only downside being that there's no established story; no tangible endgame.

With a deep interest in writing, Ben followed that into a Journalism degree. As an avid lover for gaming, he is constantly expanding his library with console, PC, and VR games. He's obsessed with stealth games and loves hunting down the smallest of details inserted by devs.
Related Articles: Curse of the Dead Gods
Share
Tweet
Share
Submit