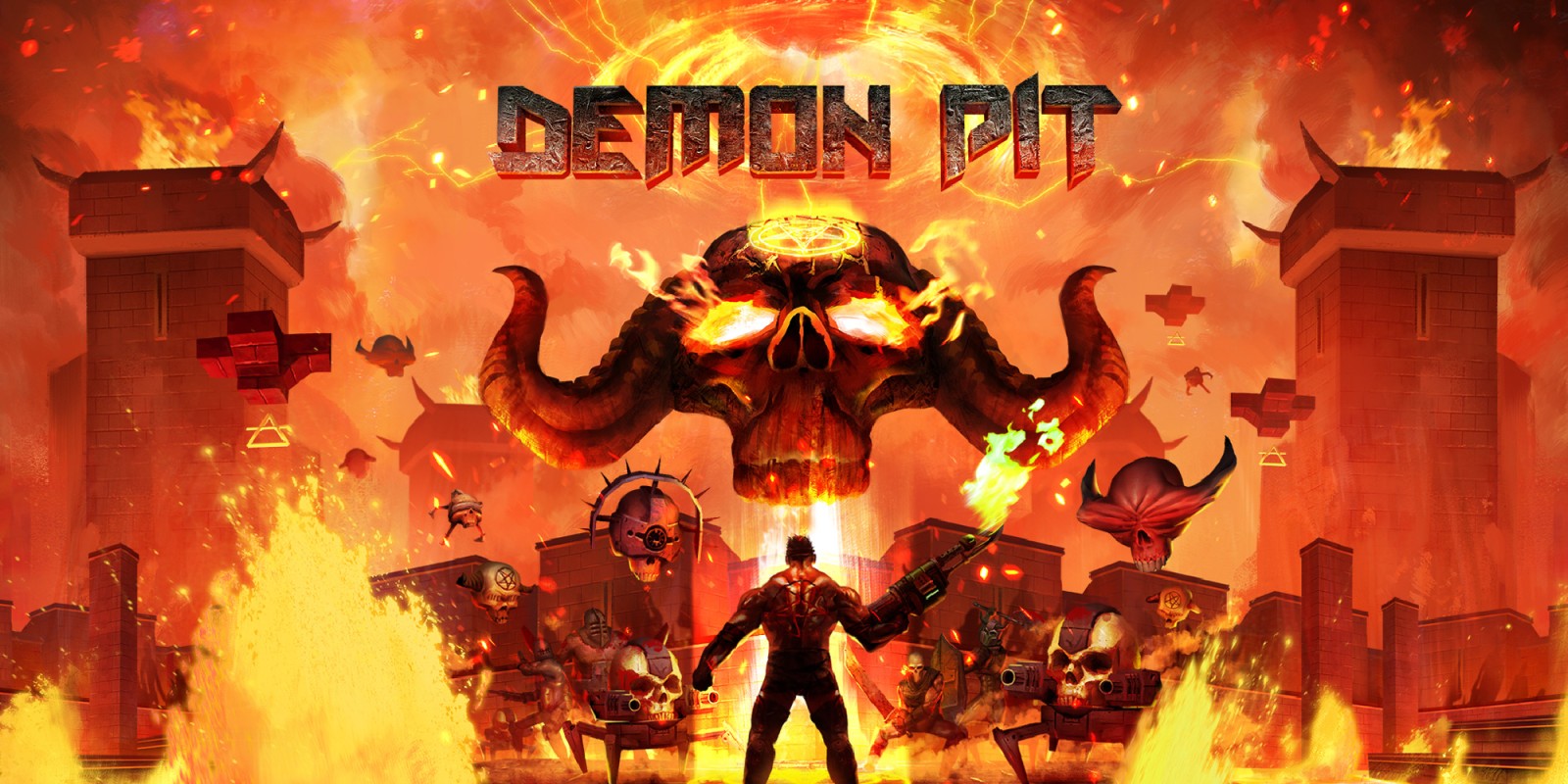 “I’ll just try one more run” is what I told myself about 15 attempts ago. “Just a quick blast of Demon Pit”, I said. But there I was, going back again and again for just one more crack at it. I wasn’t going back to uncover the next big twist in the story; there really isn’t one. I wasn’t going back to solve that really tricky puzzle, there’s none of that either. I was there to try and beat my own high-score, that’s the only real objective of Demon Pit from Digerati. Being quite the retro gamer, the old school Quake style graphics immediately grabbed my attention, so when a chance came along to try the game on Nintendo Switch I jumped in with some measure of childlike enthusiasm. It was followed closely by disappointment, at first anyway. I didn’t really know what to expect from Demon Pit beyond those classic era graphics, which I was indeed greeted with, but beyond that all I had was a single square room garnished with some weird glowing markings and a few really easy enemies to shoot at, with a gun that amounted to little more than a souped up pea-shooter. Then I died.

“Surely this can’t be it?” I thought, so I went in for another run, this time slightly less enthused, presented again with the same map, same gun, same demonic skull enemies. Then the map sprouted more walls for me to run around; shortly after that I discovered the grapple button and that I could use it to traverse between those glowy symbol things. Oh and look at that, now there’s a bigger demonic skull with pointy things sticking out of it and… Oh, I died again. But my score went up and I had learnt something new, so back in we go, maybe there’s more to this after all. This time I saw the shotgun pickup and discovered it worked as one might expect a boomstick should, but the floor changed to lava around the perimeter of the map, leaving an island in the middle with caged walls around the outside, a refuge I could access with my grapple aimed at the glowy symbol things that float over the map. You see, it turns out that the map is as much an enemy as the waves of demons the game throws at you. It changes and morphs with each new wave of enemy, sometimes turning into lava or suddenly there’ll be a laser grid straddling back and forth which you’ll need to grapple over. And then you’ll die. But your score will have increased, probably; small victories. 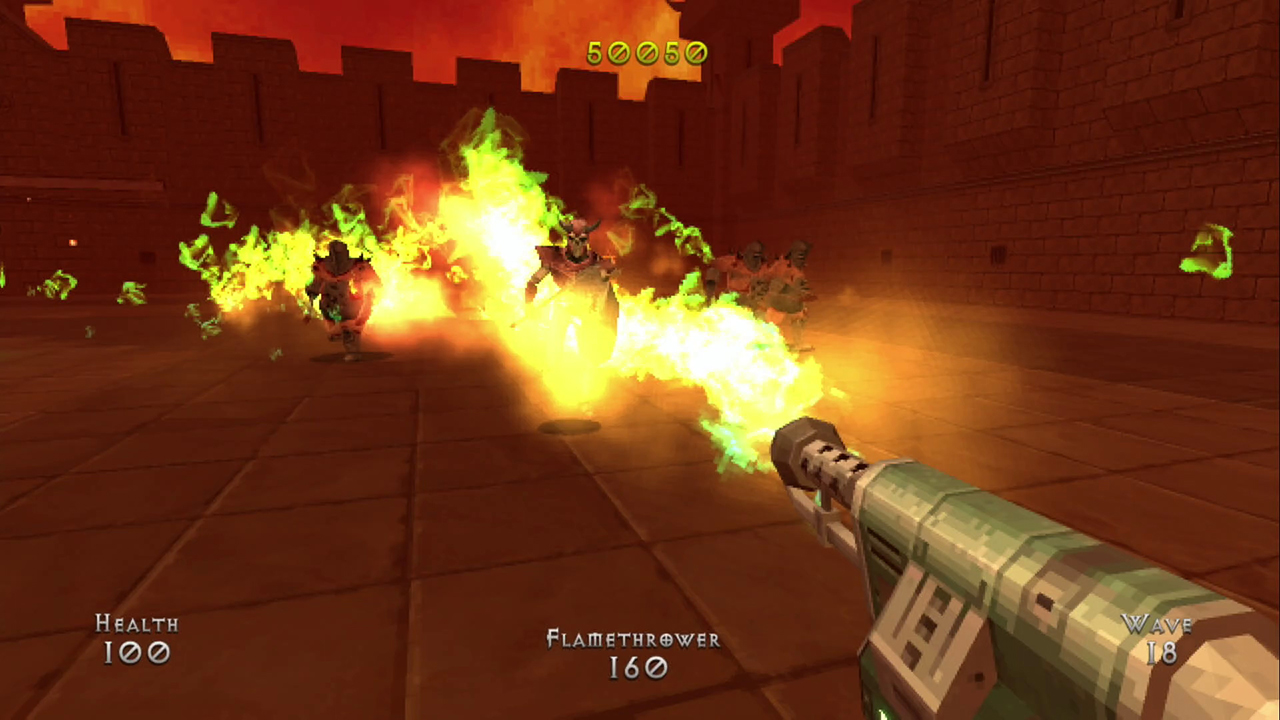 If you’re looking for engaging story and character building, you’re in the wrong place with Demon Pit, likewise if you want groundbreaking graphics or deep gameplay mechanics. What is on offer is a pretty simple case of shooting wave after wave of demons in an ever-changing map, managing which of a few weapons to use in what circumstance; infinite ammo but weak pistol for easy enemies, shotgun for grouped demons etc, while using that grapple mechanic to get around quickly and to reach health pickups that respawn every tenth wave. There’s no thought provoking narrative or deep, hidden message, just shoot the things and get a bigger score than last time. I’ll fess-up and mention that I have not seen the end credits rolling yet; I keep dying so sure, the game could end with the ultimate answer to the riddle of life for all I know, maybe the cure for all known diseases and a solution for world hunger, but I doubt it. And that’s ok, I’m having fun shooting at stuff wrapped up in a retro skin and that’s all Demon Pit sets out to do.

The game has been out for a while on other platforms now and I’ve seen some complaints about performance, but it all seems to be running smoothly on Nintendo Switch and I have not noticed any frame rate issues, even with screens full of demonic fiends. The biggest problem I’ve found while playing on the Switch is entirely related to the controls. Something just feels off; probably due to Demon Pit having been made with a keyboard and mouse in mind then being brought to consoles. You can change the sensitivity but for me, the thumbsticks would either be a bit twitchy or just a little on the slow side, with no happy middle ground; both with Joy-Cons and a Pro Controller. It’s a real shame there’s no option for gyro aiming, which I feel would largely fix the issue. Maybe they could patch that in? And of course, this is all subjective, your mileage may vary. I also couldn’t help but feel that the sound effects could use a little more… “Oomph”. Yes, that’s a professional, technical term. The weapons could have had a little more boom and weight to them, the music could also have been a bit more inspired, not a bad effort and what’s there does fit in with the retro style of the game pretty well, I just would have liked this element to pack a bit more punch. 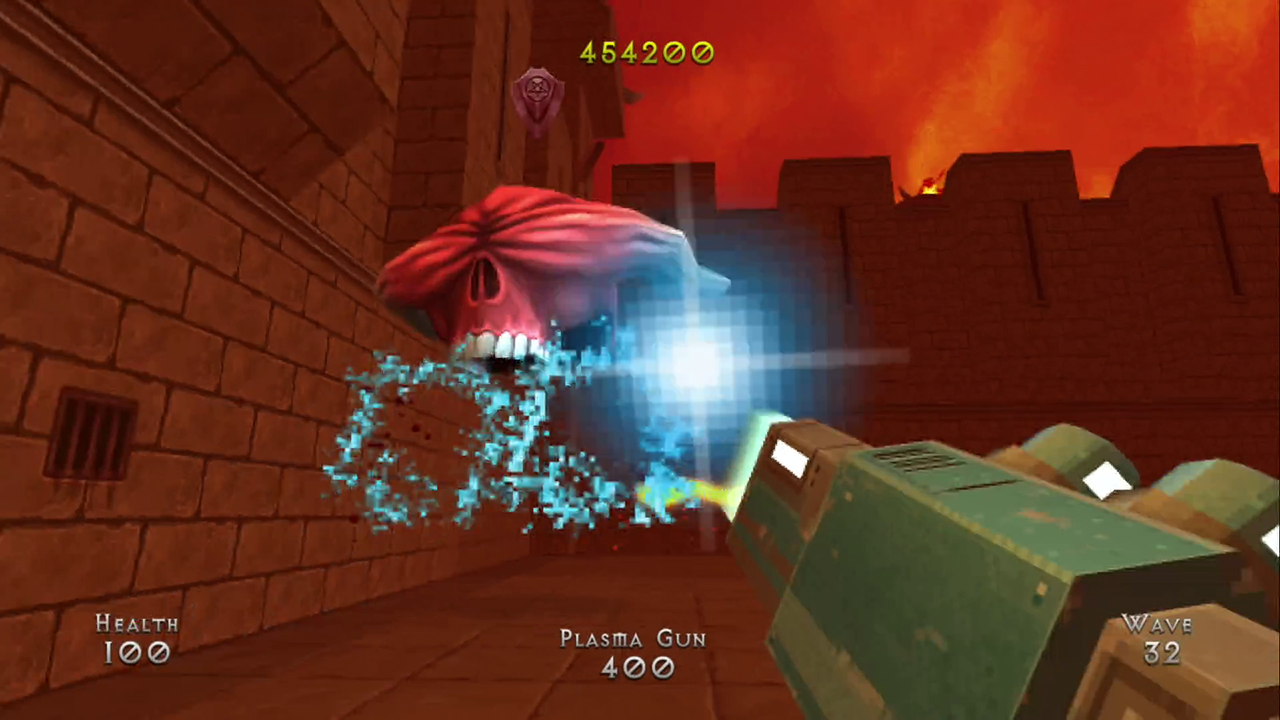 To wrap this up, Demon Pit doesn’t push any new boundaries but neither does it try too, it’s a retro inspired arena shooter and it does that fairly well. As alluded to earlier, skip this one if you’re looking for anything with depth or substance, there’s none to be found. The game could do with some more polish, I can’t quite settle with the feel of the controls and really find myself wishing for that gyro assist feature, the audio is average and by their very nature, the graphics are not going to blow any minds; Demon Pit is rough around the edges and certainly repetitive, a one trick pony. On the other hand if you have a sweet spot for retro gaming and fond memories of titles such as Quake and Doom and just want to shoot stuff up, there’s some fun to be had here.

Easy to play in short bursts between other, more fleshed out games, Demon Pit doesn’t offer anything new or revolutionary and does get repetitive pretty quickly; but what’s here is competently presented and can get addictive if you let it. Good to scratch any old school shooter itch you may have.

Grumpy gamer from UK with a keen interest in retro gaming and modding. Can also be found cycling up and down mountains, walking dogs, watching Sci-Fi and reading all sorts of books.
Related Articles: Demon Pit, Indies
Share
Tweet
Share
Submit