Golf has always been a relaxing pastime, in both real life and in video games. Puzzles are relaxing as well, so why not combine the two?

Golf Peaks is an interesting mix of golfing and puzzles. As with normal golf, the goal is to get the ball into the hole, but there’s a twist. Instead of adjusting your aim and power, swinging a golf club, and doing your best to make par, you’re given a hand of cards to work with. These cards are the moves that you can make during the level; each card shows how it will affect your shot and it disappears once used. Along with card use, the only aiming is deciding which direction you want the ball to move in.

The levels are comprised of multiple squares, with each one representing one space. The cards are either ground hits or jumps. They also have numbers on them, clarifying how many spaces the ball will move. The ground hits are the ball rolling across the ground, while the jumps are best used to reach higher levels or jump obstacles. There are even some cards that cause the ball to jump first and then roll. 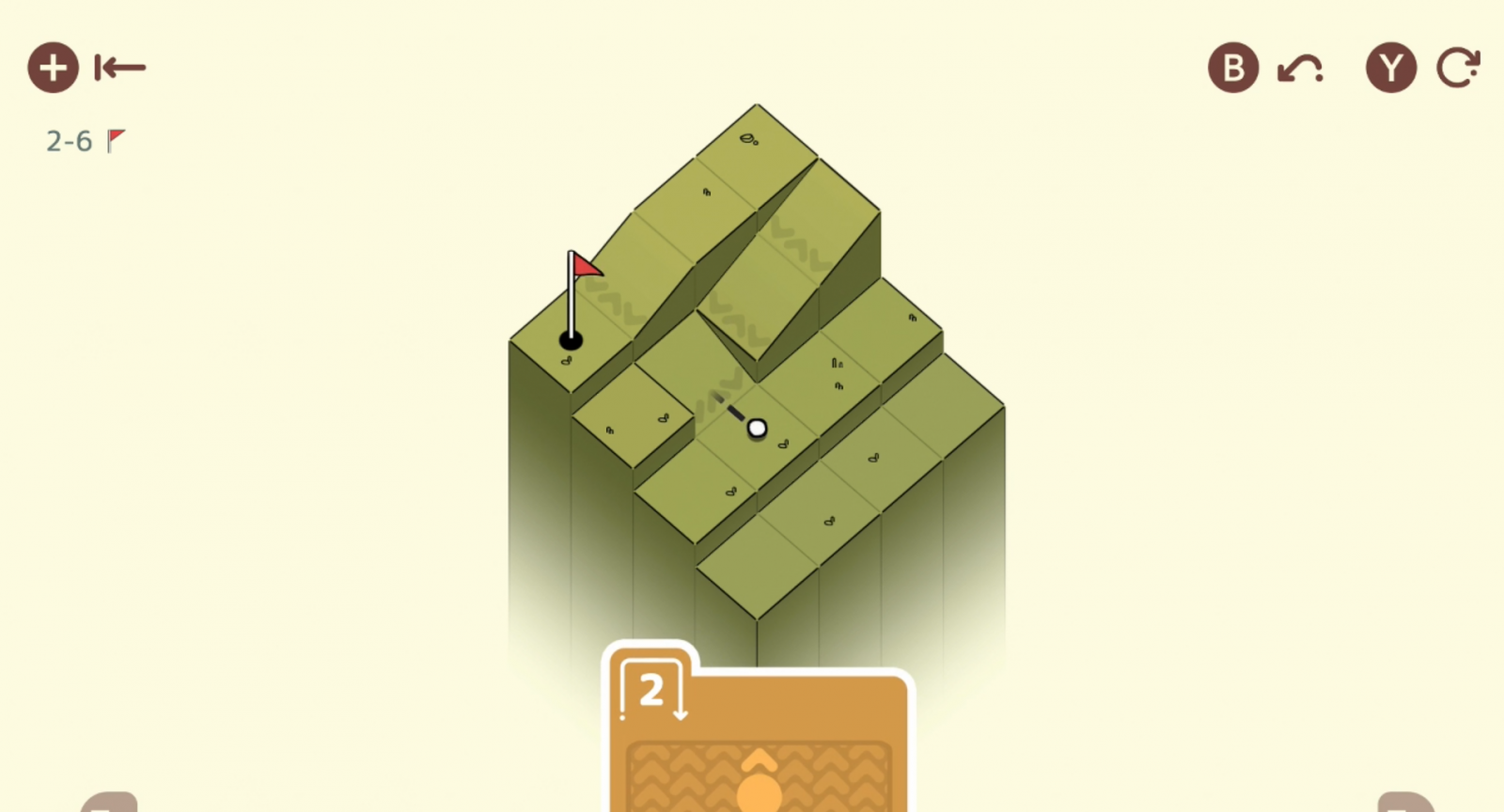 The goal of each level is to get the ball into the hole, but you must reach the hole with an exact number of spaces. For example, if the hole is two spaces away from you and you use a three space roll, you’ll roll over the hole past it. Unlike normal golf, the ball won’t fall into the hole as it passes. This adds to the puzzle aspect, as it requires you to think more carefully about your moves. It can be a bit of a bummer sometimes on later levels, but that additional challenge is part of the game’s charm.

Now, it wouldn’t be golf without some hazards, right? Real life obstacles such as water, bunkers, and rough terrain make appearances, along with other additions such as ice, gaps, walls, and height differences. Water causes your ball to reappear on the last space your ball touched, while bunkers suck up the ball and end the level. The rough can only be escaped with jump moves; ground hits get wasted as the ball will stay in place. Ice spaces cause the ball to slide across every ice space it passes, gaps result in the ball being lost, and walls must be jumped unless you want the ball to bounce off of them. Height differences are only a problem if you need to go up a level. The only ways to do so are with ramps, jump cards, and bounce pads. Bounce pads are marked by Xs and are very helpful in a pinch.

Golf Peaks has 108 levels, comprised of nine worlds containing twelve levels each. The first nine holes of each world are the main ones, while the remaining three are more challenging bonus levels. You only need to beat the first nine in order to reach the next world, but I recommend playing the bonus holes as soon as possible too. The levels are fairly easy at first, but the difficulty slowly ramps up as you progress. I appreciate the good pacing in terms of difficulty instead of a ridiculous jump out of nowhere. The downside, however, is that even with 108 levels, it doesn’t take very long to complete them all. Depending on how well you do, the game may only take around two hours or so. 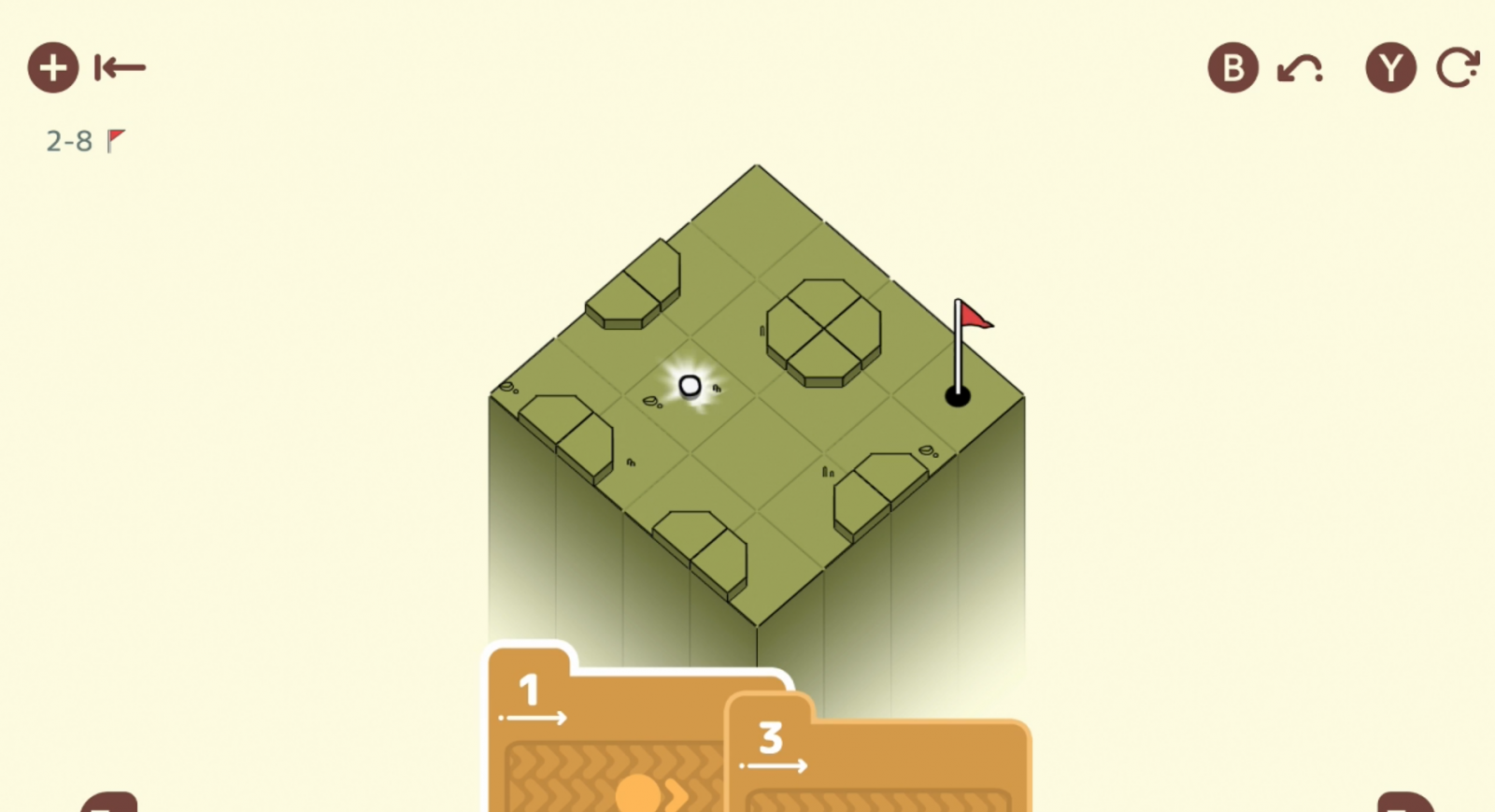 Golf Peaks may not be a long game, but it does provide some entertaining gameplay. The visuals aren’t anything to rave about, but they do give an air of calm. The soundtrack adds to the peaceful tone of the game as well. All of this meshes together to create a wonderful puzzle game experience. For $4.99, Golf Peaks seems like a good deal for those who want a few hours of relaxing gaming. So get ready to play your way through a plethora of courses as you prove your puzzle-solving skills.

Golf Peaks is an interesting mix of puzzle-solving and golfing. The card playing mechanic is entertaining and adds a good challenge. It doesn't take very long to complete every level, but it's a nice journey.

Codi loves to play video games and watch movies. He will watch almost any kind of movie just to experience them. His ideas take inspiration from the shows and movies he watches, and games he plays. He also loves a good pun.
Related Articles: Golf Peaks
Share
Tweet
Share
Submit