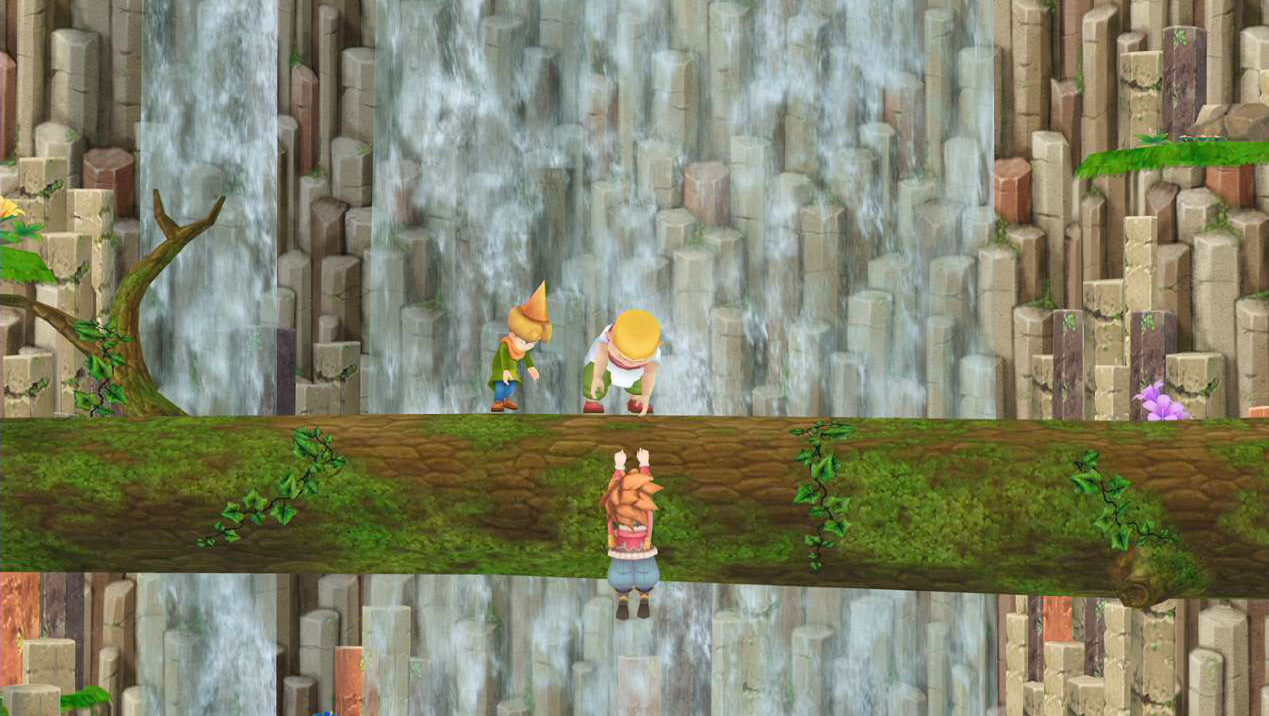 Secret of Mana is a objective treasure that is hard to judge. When I look at it, in any form, on any platform with any graphics, all I see is a beautiful, shining diamond. Gloriously designed, crafted, and reflecting a perfection back at me. When someone not looking through a pair of hyper-nostalgic rose colored glasses looks at the game, they see a slow moving, oddly functioning title that looks childish, silly, and poorly paced.

This new Secret of Mana Remaster gives me and many other long time fans of the game a real chance to see it with fresh eyes, and it shows its age from the old days and accumulates more problems with some of the upgrades, but despite those it remains one of the great games of all time, even if the remaster feels unnecessary.

Gone are the old graphics, music, and sound. Those elements, in particular the music, were the elements of the original that endeared Secret of Mana to a generation of gamers. Playing the game with all new look, feel, sound, and music is jarring to say the least. The game remains faithful to the original in its redesigns, doing the best it can to mimic every little detail in the upscale, and that helps smooth over the changes as you play through. However, it just feels uninspired, and the masterpieces from the original soundtrack are muted and at times generic. It put a heavy damper on my overall enjoyment, but there are a few things that make up for it.

One of my absolute favorite features of the new game is the mini-map, which is just the original game world as it was on Super Nintendo. It’s very cool to be able to look at the mini-map and compare how certain houses look, and it also allows you to see more of what the original designers were going for with the limitations of 2D.

For the rest of the presentation, what we get is a mixed bag. The 3D models for the characters are very cartoonish, and they don’t look very good close up in the cutscenes. Also, the characters mouths do not move as they speak, and it is an uncomfortable sight when viewing the models for a long time. It has this eeriness to it that really disconcerts me. Eventually you get used to it, but it is just kind of perplexing why they would do this. Even having untimed mouth flaps like the RPGs of old would be less unsettling.

The flip side of this is that overall the actual design of the characters is very satisfactory. The sprite child in particular comes alive in this remake, a victim of a horrible red eye design from the original that made several characters look like vampires or demons. All of the enemies look fantastic in this remake as well, with the extra detail and variance in size allowing for a much more impressive presentation. Some are better than others, but most are true to the original.

Secret of Mana, for those who have never played the game, has an active battle system where you control one of three characters, and the other two are AI controlled. Upgrades have been made throughout the battle system for the player, but they are very small, subtle ones that don’t impact the game in a noticeable way (which is good) but leave lots of dated mechanics intact (which isn’t so good).

For instance, in the original flying enemies were very confusing to hit, and it took time and effort to learn the lines you had to take to strike. In this version, that is generally fixed largely due to the 3D models. Instead of guessing at 2D models, you have a big nice 3D target that you know where to hit. It makes a large difference in time and is a smooth upgrade over the original.

However, having made that change, they left in the impossible to dodge attacks that land from across the room, making boss battles unbalanced affairs. They left in lag between landed attacks on enemies that make battles drag far beyond what they should. They left all the long walks through empty castles and palaces after you’ve defeated a boss. All of these are signature features of the original, yes, but they are also signs of the limitations of the times, and could have been left on the side of the ol’ time highway between then and now.

I still love the way the game plays because it is still Secret of Mana, and if you are looking for a faithful experience then you’ll find it here. It is a very mixed emotion because this is every bit the game I adore, and it plays just the same as it always. Despite that I can’t help but feel like improvements might have made this remaster a much more compelling product.

The AI you are accompanied by is also slightly improved but remains the same in other frustrating ways. Both of the companions seem to be smarter attackers, and also have more capacity to dodge attacks. However, they still get stuck easily on rocks, down wrong paths, and in various other ways and the can’t fix themselves. They are magnetized to your character, so they will just walk into a wall infinitely, making you backtrack to get them. In this day and age this absolutely should have been fixed.

The game presentation is another toss up, with one big iffy negative that throws the entire remaster into question. The voice acting is mostly good, but the dialogue is painfully childish, a reminder that this feels like a child’s game. I like the upgrades to the sound effects, and the ambient sounds as well. They have much more clarity than in the original and make the game come to life in a new way.

However, a cardinal sin that seems to plague each and every redone classic game is a soundtrack that has been scarred and hacked. The upscaling of the music has resulted in the cheesy use of vocal keyboards, overly loud and plain terrible drum sounds, and some sort of abrasive horn noise that will make you regret having ever heard any noise ever. There are instances of the upgraded soundtrack that shine, such as the theme for the water palace. Any track that is soft and piano driven comes out better in the remake, and shows a beauty lost in the originals.

Unfortunately, any jaunty fun track in the game is now a mess. The song that plays while in the wild and the song that plays while in town have both been ripped to shreds. Classic endearing song elements are replaced with clown show level silly noise making, and iconic parts of the music, most noticeably the hard snare sound, are completely missing.

Too many times these music upscale jobs try to showcase what the chiptune instruments were going for, and abandon what the chiptune instruments actually sounded like in the process. I consider it a borderline criminal act to have messed so entirely up in handling what is one of the most beloved soundtracks in gaming history. Thankfully, and mercifully, you can switch to the original music and restore sanity at your leisure.

The Secret of Mana Remaster was highly anticipated by a lot of fans and overall manages to capture the experience of playing the original within an all new outer shell of upscale graphics and new sound. It fails to make any revolutionary changes to the gameplay, forgoing an opportunity to improve on one of the all-time classic games, and the changes it does make (particularly the music) are hard to swallow at times. Secret of Mana for the PlayStation 4 is not quite a disappointment, but it does leave a less than satisfying feeling.

Patrick Rost has been with Gaming Trend since 2013. At first focused on sports coverage, Patrick has gone on to cover a wide range of games and other products for the website. Outside of Gaming Trend, Patrick writes and records music, grinds perpetually in Elder Scrolls Online (PS4), and lives day to day with his two dogs, Bob and Stella.
Related Articles: Secret of Mana
Share
Tweet
Share
Submit