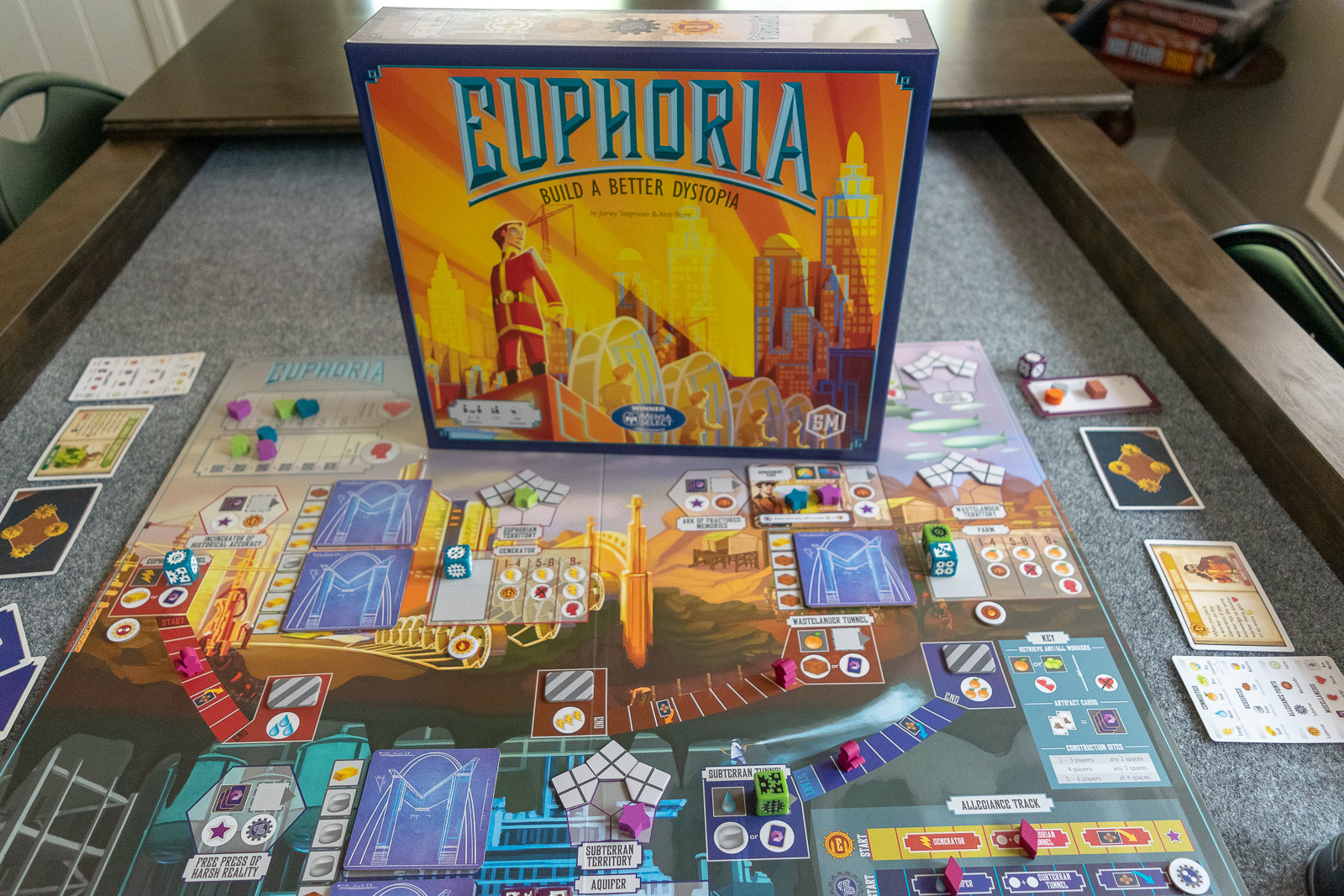 Some of my favorite tabletop experiences over the last couple of years have come to me courtesy of Jamey Stegmaier and Stonemaier Games, with Scythe and its expansions currently holding the top spot on my personal favorites list, so naturally I’ve been curious about how well his earlier games play. First published in 2013, Euphoria: Build a Better Dystopia is a quirky worker placement game that I’ve had my eye on for some time, and the recent release of the Ignorance is Bliss expansion inspired me to finally break down and give it a shot. 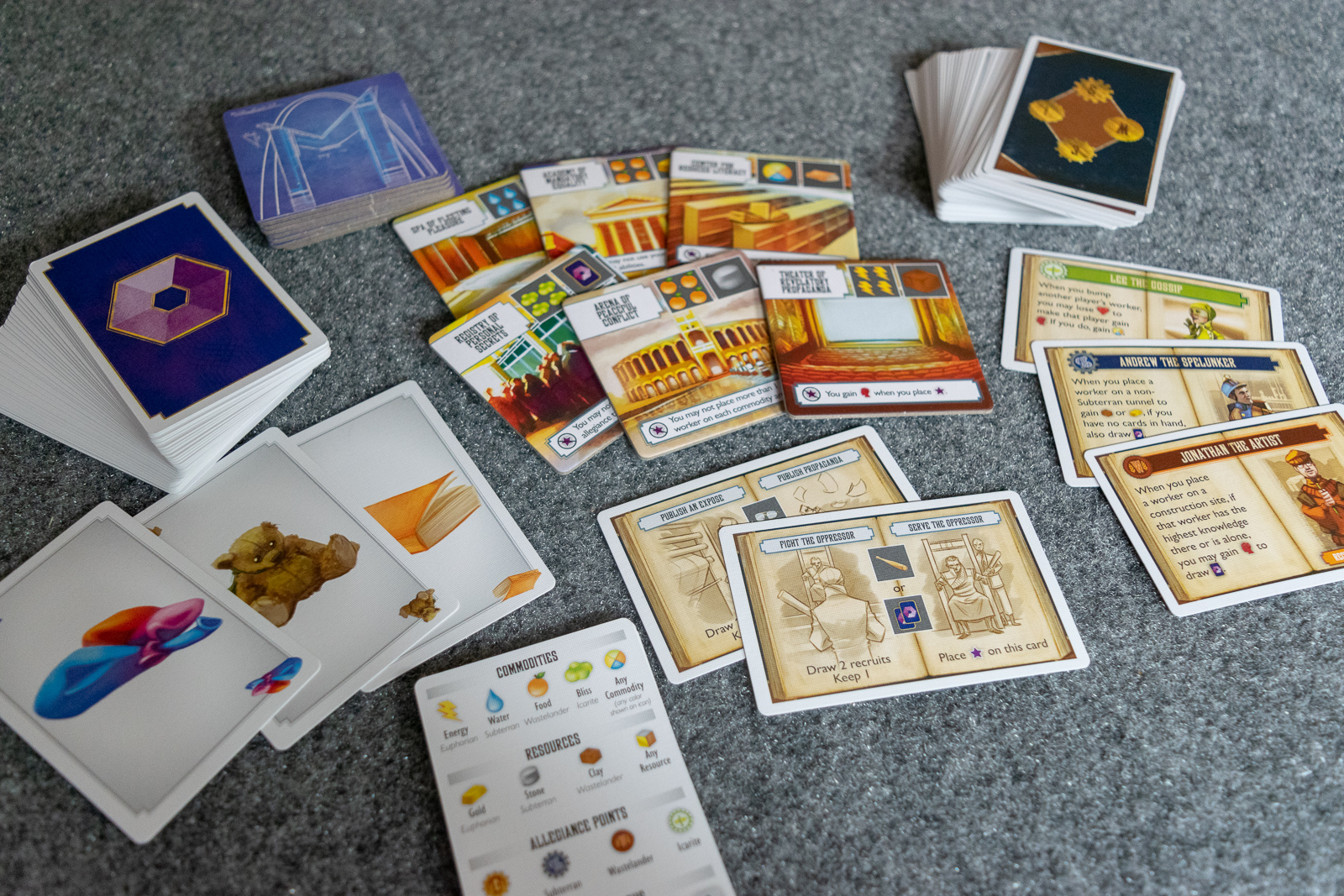 Right away, the theme of Euphoria is unique and striking: players lead a team of workers and recruits vying for control of a dystopian cityscape by gathering resources and commodities, fostering allegiances among the four factions, and building ‘markets’ that can change the rules for the worse for other players. The more your workers know, the more it hurts you, so it is vital to keep their knowledge low and morale high. The art style is bright and silly, and reminds me of a more color-saturated variation of the art deco dystopian style of the Bioshock and Fallout video game series’. 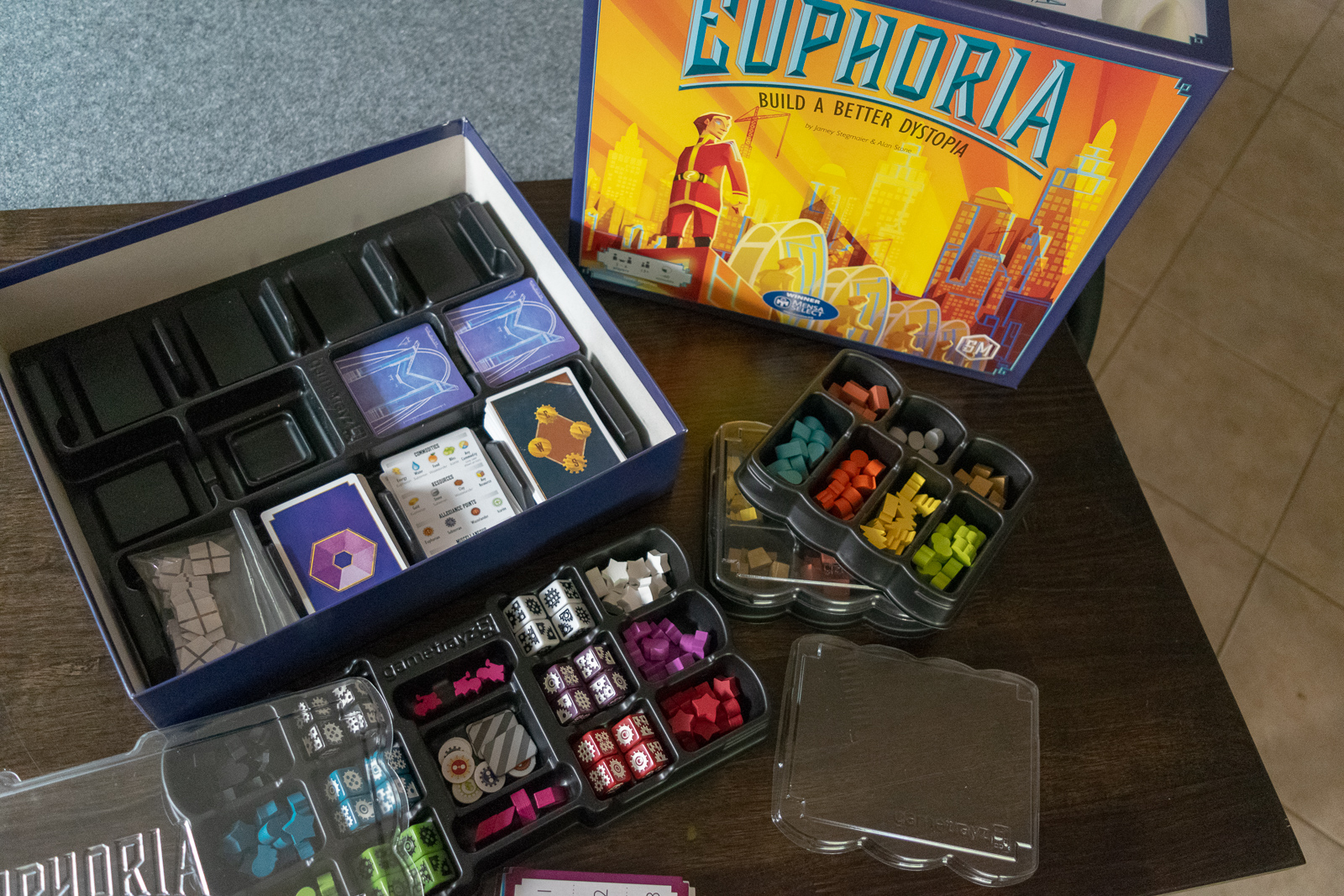 The third edition of the game follows a trend I’ve been seeing in more recent Stonemaier releases- custom box organization inserts by Game Trayz. I can’t stress enough how much I appreciate this, component storage and organization makes a huge difference in the amount of time it takes from the game hitting the table to actual play (not to mention cleanup afterwards). The four included plastic trays separate the components out conveniently for ease of setup, and the two resources and commodities trays are easily distributed to either side of the board during play (a far better solution than placing every single wooden piece on the various ‘dead’ areas of the board as directed by the rules). I’ll be honest, if I was reviewing a previous edition with the tiny ziploc bags instead of these trays, I’d likely be complaining about storage, because there are a LOT of different types of bits in this game—-four types of commodities (energy, water, food & bliss), three types of resources (gold, stone, and clay), miner tokens, allegiance track tokens, and morale, knowledge, and authority tokens for each player color. In addition to all of the wooden tokens, there are worker dice for each player, market tiles, artifact, recruit, and ethical dilemma cards, and a handful of other cardboard bits that act as situational modifiers to the game board depending on player count and various actions during the course of play. So, yes, the Game Trayz are a welcome addition, and there is plenty of room left for the expansion components as well. 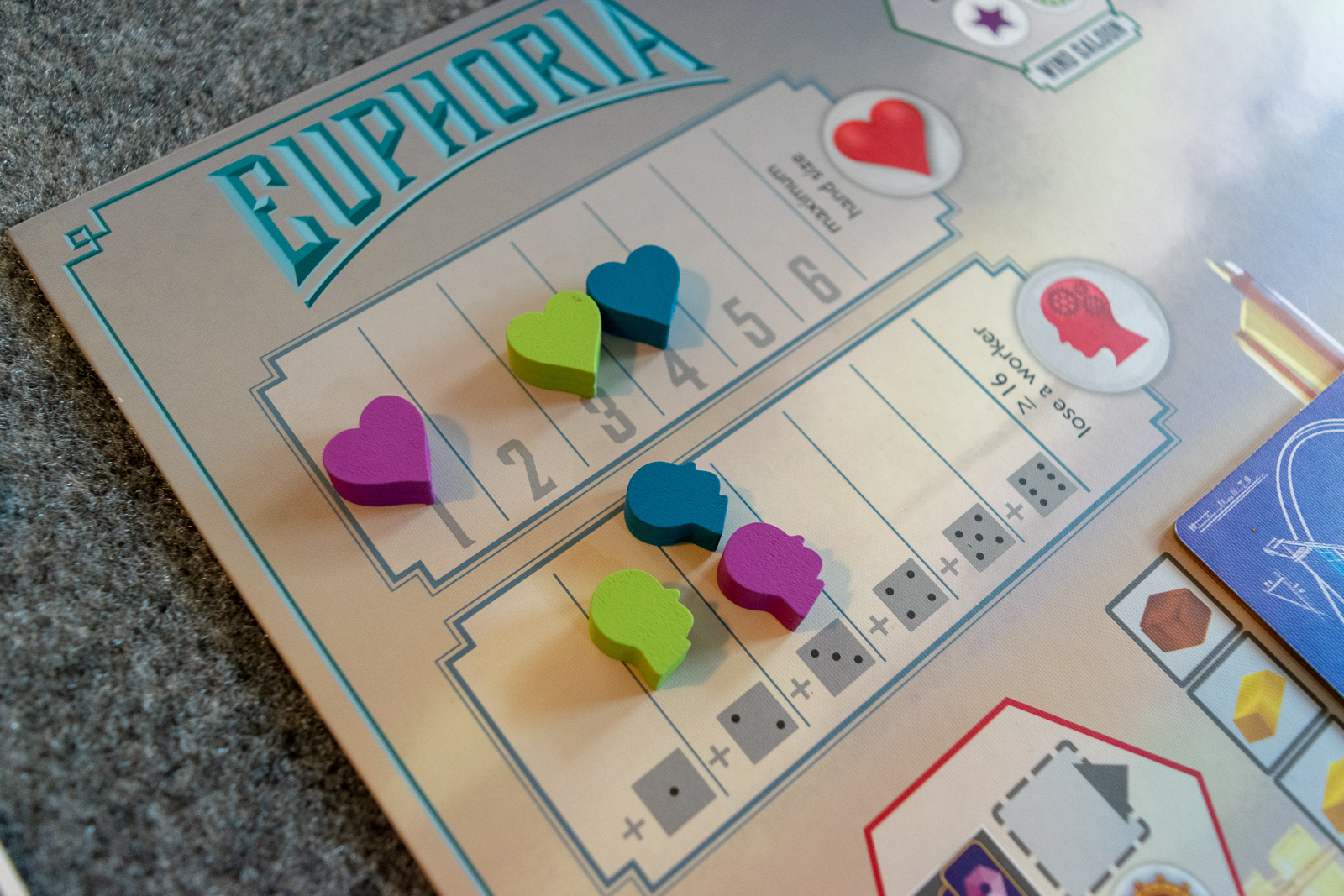 The first thing that struck me as I set up the game for our first play session was how inscrutable the board layout and components were. Most game boards convey directly or through symbolism what you are about to do on them, but Euphoria was an enigma, and I had to rely heavily on the rulebook just to sort out what I was looking at during my first couple of games. I’m not sure if this was because of the cardboard pieces covering up disabled functions of the board, the unique shapes and colors of the numerous types of wooden tokens filling the board gaps (again, stick with the trays instead of doing this), or the strangely decorated six-sided dice, that actually represent workers, but the first half of the first game was very much about adjusting to Euphoria’s design language. There was a noticeable moment roughly halfway through when things started finally clicking, and by the end of it I couldn’t wait to play again. 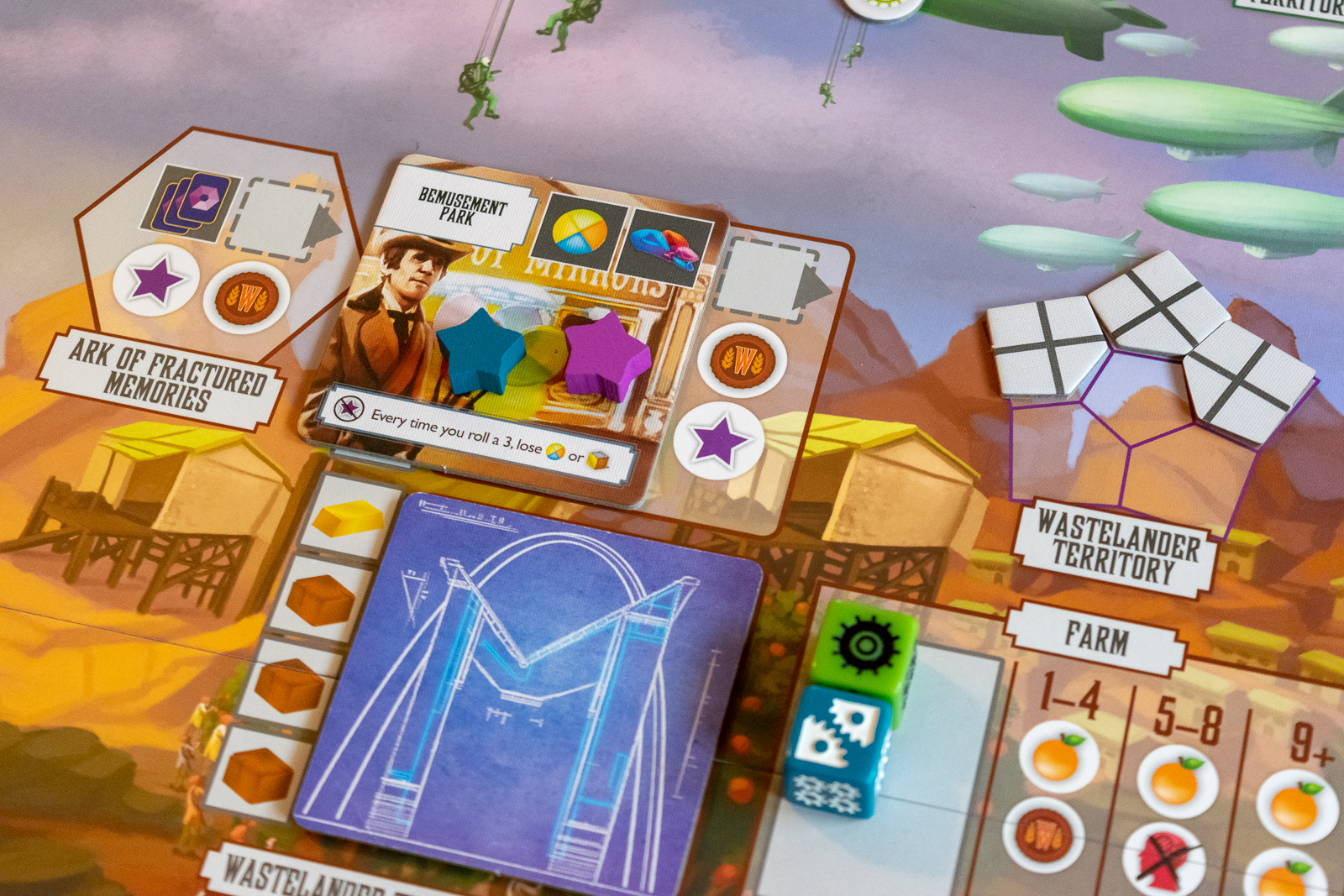 One of the things that took some getting used to was the use of dice; all these different wooden pieces included in a worker placement game, and it’s the dice that end up being the workers! Players can have up to four workers at any given point in the game, and when any of these dice workers are activated, removed, or bumped from the board, any unallocated worker dice need to be rolled for what is called a ‘knowledge check’. If the total of the dice plus the position value on the knowledge track is 16 or more, then a worker is lost— they become too aware of the bleakness of their existence and run away in despair. Initially, I shied away from activating my full complement of workers to avoid the chance of a bad roll undoing my workforce, but eventually I realized that the balancing act lay in how many worker dice I had to roll at any given time, that it actually made sense to leave some workers allocated to avoid a higher total. Also, leaving those workers allocated on commodity spaces often forced another player to gain or lose knowledge as the die totals are cumulative, altering the effects according to the associated chart as the total gets higher. 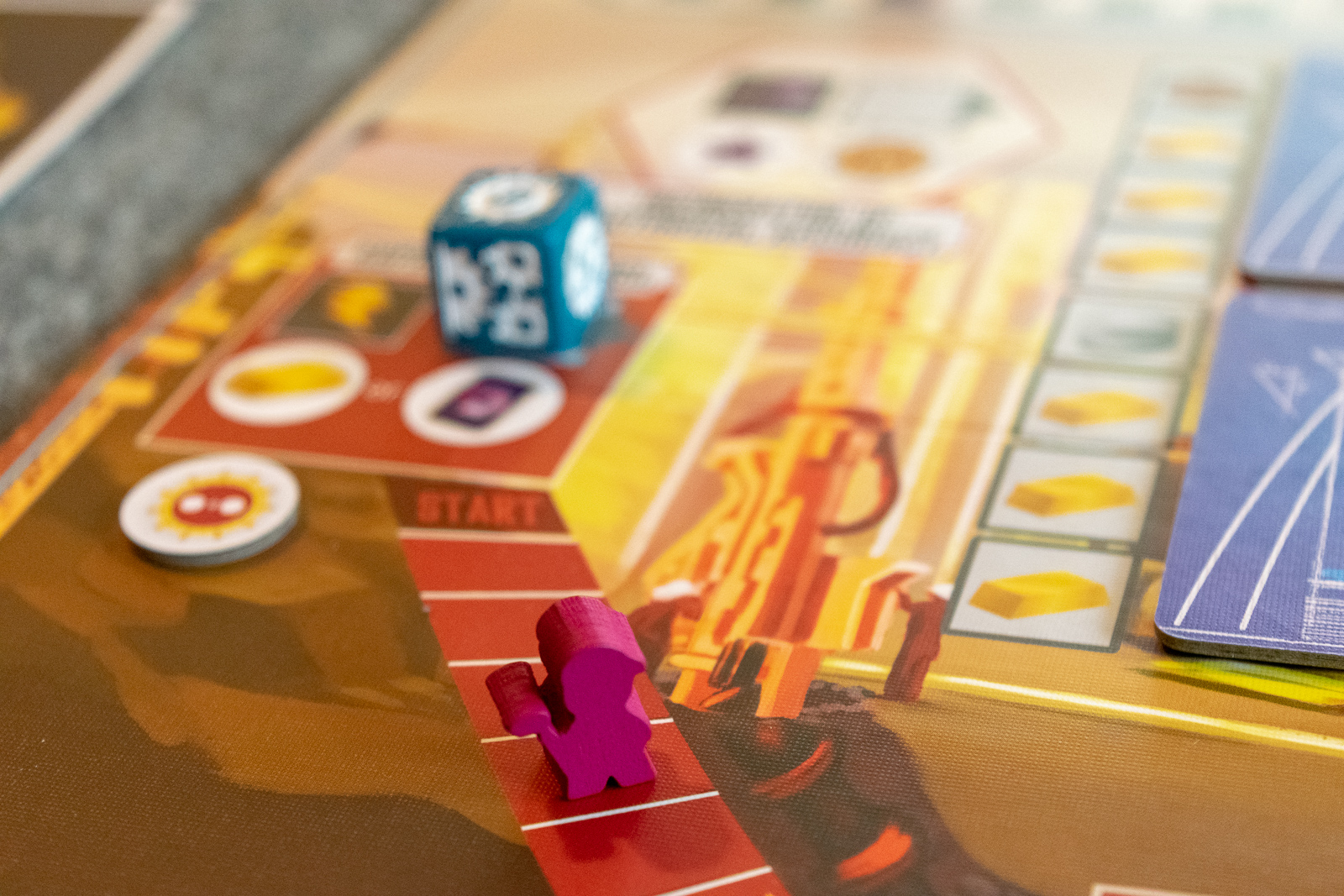 On the board are three tunnel tracks, each one leading from one of the three lower factions to another’s commodities area. A worker is placed on the tunnel’s action space to advance the miner meeple along the track, and while the end goal is to activate a new action space where you can ‘steal’ more of another faction’s commodity with less risk.The real benefit in tunneling comes from gaining artifact cards and/or resources. Artifact cards have many uses- trade in any three cards (or a pair of identical cards) to gain an authority star on a territory, find a specific artifact to resolve an ethical dilemma card, or use them as part of the cost of placing an authority token on an existing market. Resources, on the other hand, are strictly used only at construction sites for the building of additional markets. Workers are placed and left on the resource space for a chosen construction site, and once a sufficient number of resource spaces are filled (determined by the number of players), the new market is built and all players who participated in constructing the market place an authority token on it. Players who didn’t help build the market suffer the unique penalties outlined on the tile until they can pay the cost of the market to place their authority token. 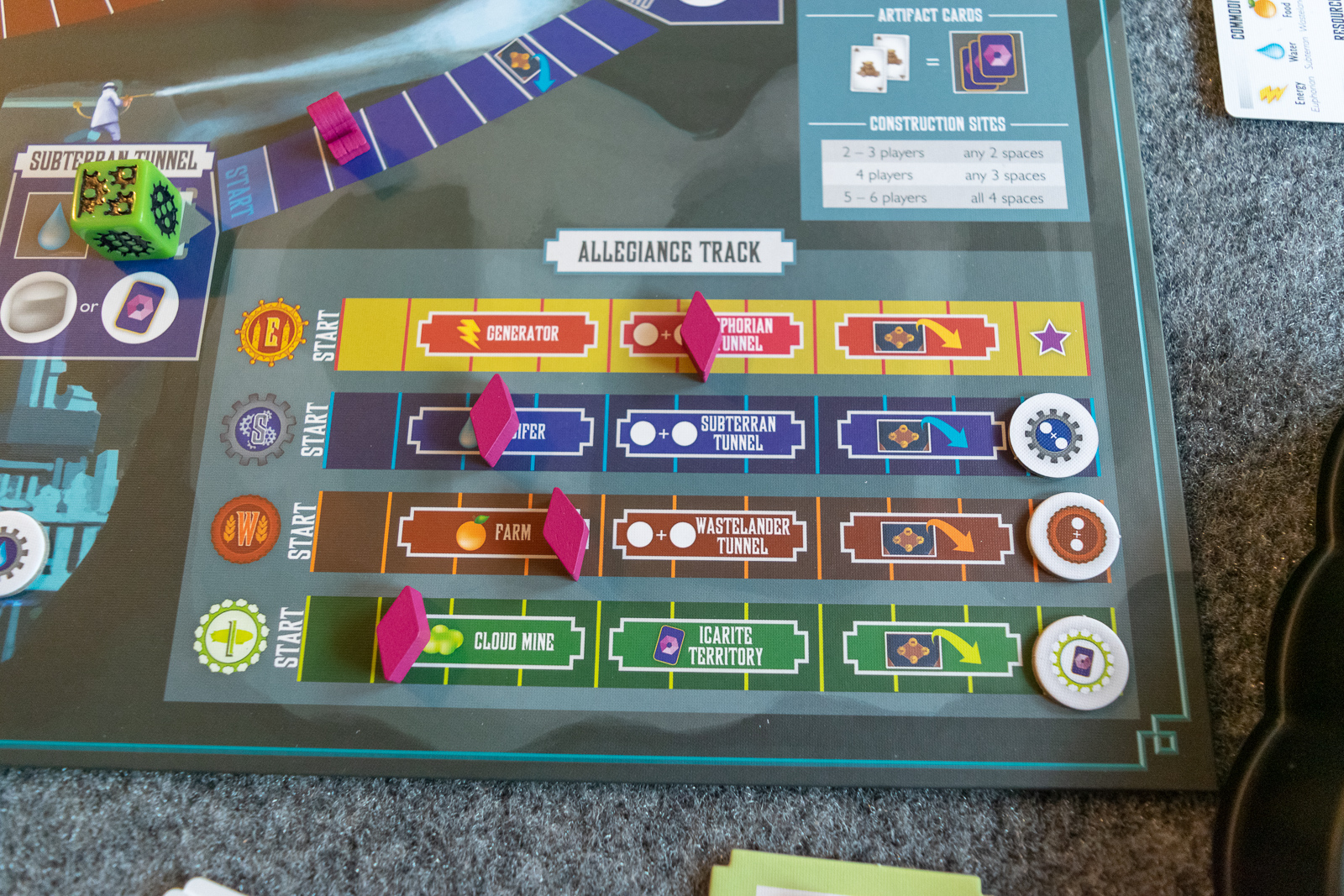 As mentioned previously, there are four different factions in the game, and they are distinguished by the commodity they produce: Euphoria/energy, Wastelands/food, Subterra/water, and Icarus/bliss. In addition to splitting the board into four distinct areas, factions are represented by the recruit cards and the allegiance track. Recruits confer special abilities to the player once certain circumstances are met, such as gaining two knowledge points in exchange for an artifact card. Players start the game with one active recruit and one inactive recruit (who can be activated later in the game) and additional recruits can be acquired through other means. Meanwhile, the allegiance track slowly alters the rules of the game as players cooperatively advance each faction, such as conferring additional commodities or artifacts on production, or allowing both rewards in the tunnels. Once a faction’s track is completed, all players with recruits belonging to that faction can place an authority token on each one, further advancing the player towards victory. 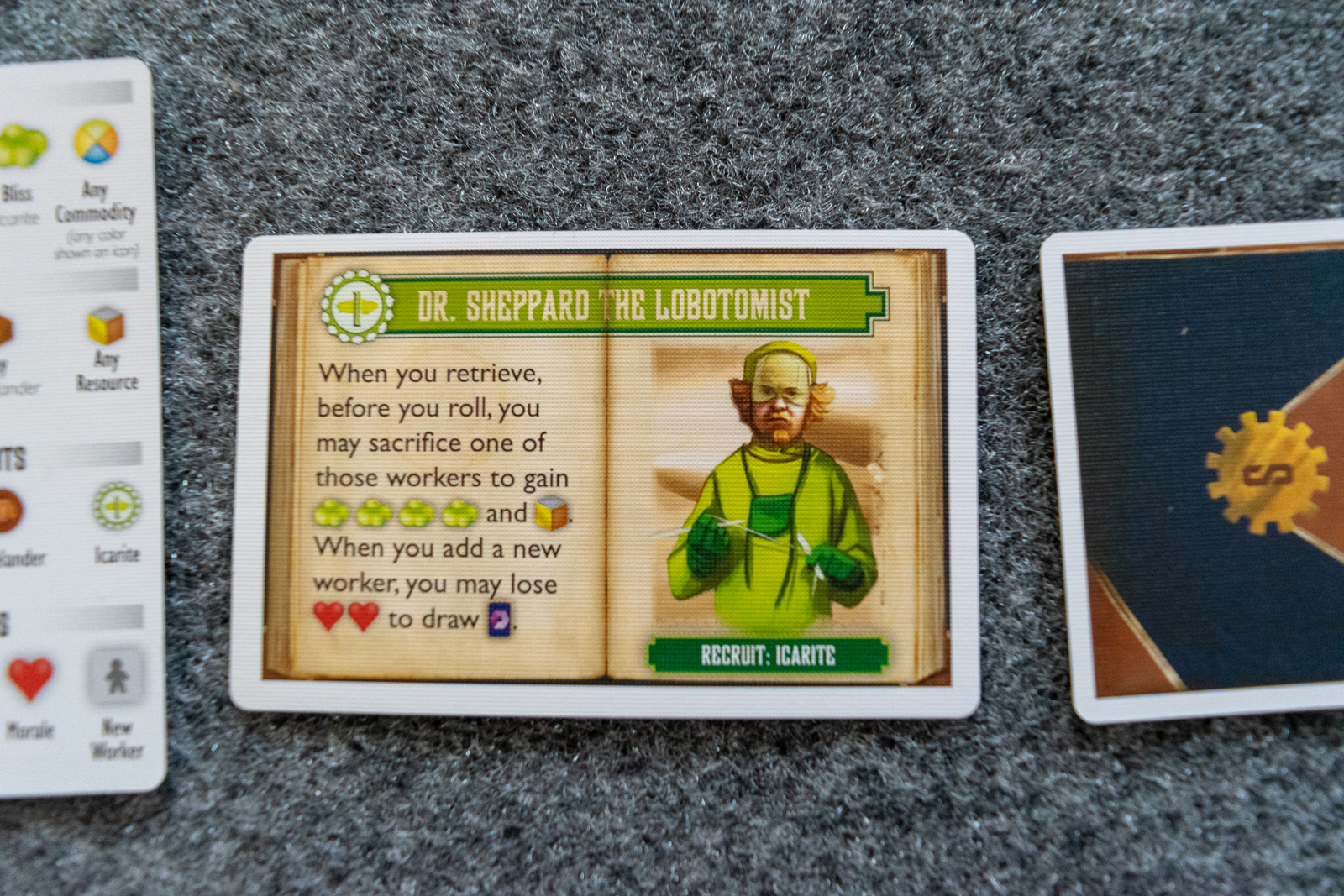 Ultimately, the goal is to place all ten of your authority tokens, winning the game. There are so many ways to do this, so many paths to victory, that the game ends up being more of a race than anything else. Attempts to thwart other players from placing authority tokens are easily circumvented simply by shifting focus toward another tactic, and I found that, until players were able to start building markets, there really wasn’t too much impact that one player had upon another. Once those markets start getting built, though, things can start to get pretty ugly, as some of the focused rule changes can really set you back or prevent you from even placing workers in certain spaces or using your recruit’s special abilities. As a result, players will be focused on parallel tracks for roughly the first half of the game, with the second half characterized more by a race to build and claim markets. Ordinarily I’d be put off by such a disconnect between players but the build up is so varied and fun that it more than makes up for it. The passive PvP nature of the markets can creep up on you, and I love the flavor and dark humor they add to the board once they are flipped over, I just wish they were a bigger part of the game earlier on. 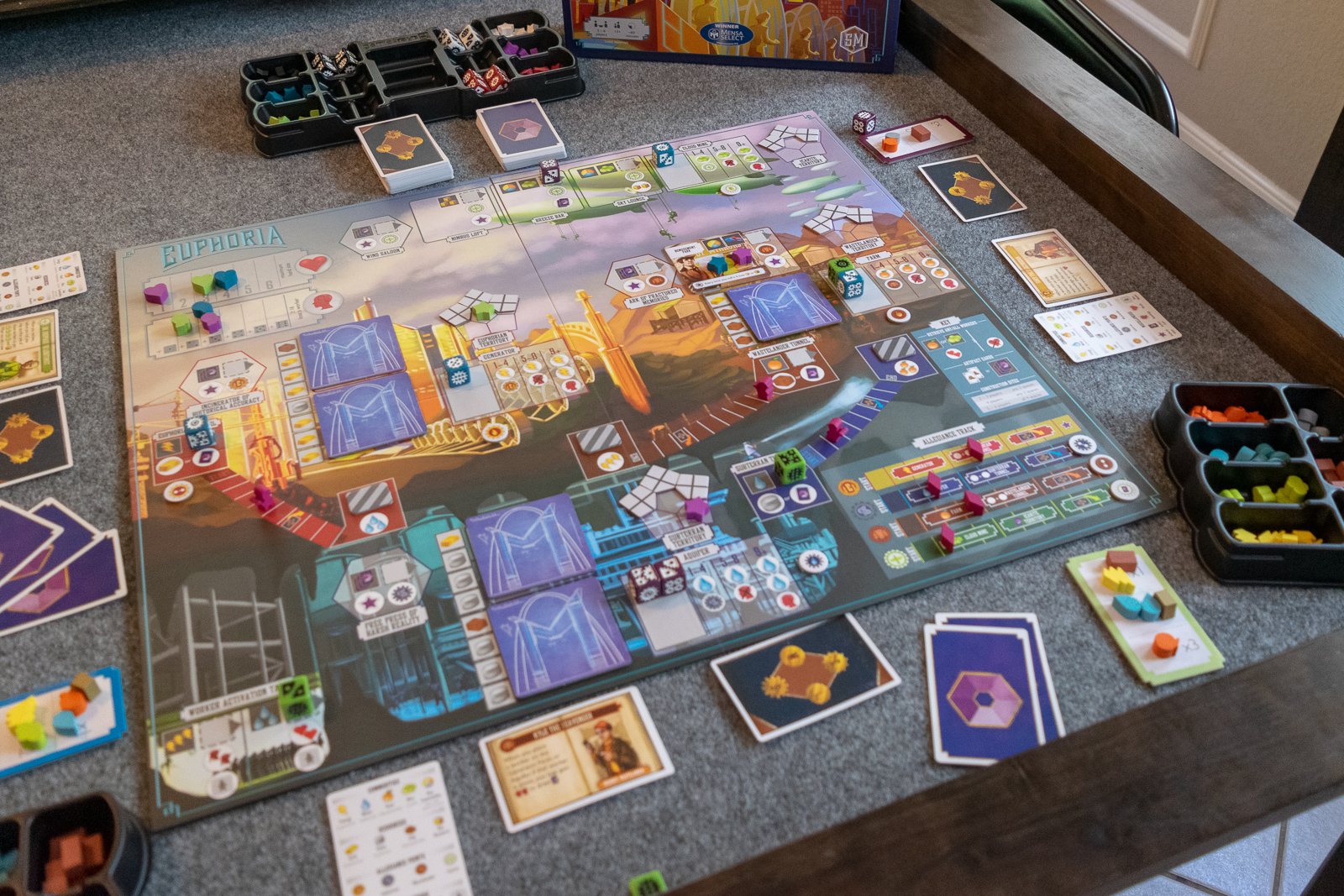 Euphoria: Build a Better Dystopia is a game that throws a lot at you but never really reaches the point of too much. While there are several different ways to progress towards a win, none of them ever trap you into one mode of play, and it is easy to shift tactics based on the course of the game, with no single tactic feeling out of balance with the others. The sheer amount of things to do and keep track of account for a lot of the complexity of the game, but the mechanics are very straightforward, and the quirky theme and bright visual style do a lot to hook players and make the game worth bringing to the table again and again.

Mike Dunn is the old man of Gaming Trend, having cut his teeth on Atari consoles and First Edition Advanced Dungeons & Dragons back in the day. His involvement with Gaming Trend dates back to 2003, and he’s done everything from design and code to writing and managing. Now he has come full circle, with a rekindled passion for tabletop gaming and a recent debut as Dungeon Master (nearly forty years after he purchased the original DMG).
Related Articles: Euphoria: Build a Better Dystopia, Tabletop
Share
Tweet
Share
Submit