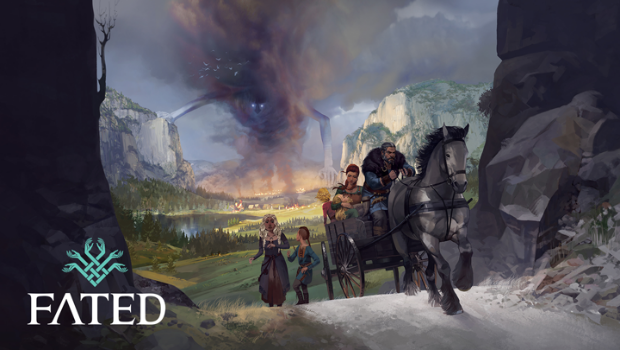 I’ve always had a great interest in Vikings and their culture, so Fated: the Silent Oath sounded like an incredible game the first time I heard about it. I was ready to step into the shoes of Ulfr, a Viking who has been brought back to life by a Valkyrie, at the cost of his voice, to protect his friends and family after a series of tragic events befalls them. Unfortunately, it seems like Ulfr’s shoes were a little too big to fill as the game stumbles in many areas.

Fated does a great job of connecting you with your character’s family. I truly enjoyed the moments where Freya, your wife in the game, talked to me. She is very well voiced and I felt that I could feel real emotion in her. Unfortunately, both of the children in the game come off a little stiff and unrealistic in their delivery, and even though I became fond of the daughter Lif, as a character, I found that my immersion was dampened due to the poor voice acting of her and Sven.

Freya on the front of your wagon.

Immersion is a big deal when it comes to VR games, as that is one of the genre’s main draws. I want to feel like I am a pilot in space or a warrior from the Viking era, but Fated doesn’t make me feel like I am anything like that and might be the worst example of immersive VR that I have seen to date. The game immediately feels off and loses all immersion thanks to the awkward positioning that your characters start in, and the effects of this never really seem to wear off. There was no point while playing that I wasn’t fully aware that I was playing a game, which doesn’t make for a good VR experience.

In Fated, you can do little more than raise your character’s arms or walk around. I was amazed at how little gameplay there actually was in this game, if you can even really call it that. For the vast majority of Fated, the only ability that your character has is to walk forward and wait for the next series of dialogue to begin, which becomes more of a chore than anything else, since you have no other options. There are a few gameplay elements such as shooting arrows or solving a few puzzles, but these sections are scarce and brief, with the puzzles essentially being a “Simon Says” clone.

Time for some puzzles

While the gameplay is not Fated’s strong suit, the world of the game has a rather nice setting. The game’s art direction initially came off as peculiar and a little hard to look at, but I quickly became accustomed to its minimalistic and colorful design, finding it to be actually quite beautiful. Fated isn’t the most realistic or detailed game on the market, but it makes up for it with wonderful use of color and some truly breathtaking sights.

One of the most uncomfortable and awkward aspects of the game, however, is the many moments of silence that take place. The characters talk fairly often, as that is the main driving force of the game and its only saving grace, but there were far too many times where I found myself walking for minutes at a time with no dialogue or ability to do anything else. These sections were extremely boring and not at all what I expect from such a short and story-driven game.

The game really feels more like a ride at Disneyland than a video game. That being said, I did enjoy the ride once I started to view it in that light. The story is intriguing and I am a sucker for Norse mythology, so I loved hearing the little tidbits of lore that are peppered throughout the course of the game. While the game’s story delivers more questions than answers by the end, most likely to be tied up in a future game, I enjoyed the journey that the game’s two hour experience delivers.

The gang is all here

Even though Fated doesn’t offer much in the way of actual mechanics, The ability to answer questions in the game by nodding yes or shaking your head no is very original and innovative for the space. The feature doesn’t work great and neither answer affects the game much in anyway, but the use of a VR headset as an input device rather than for camera control or aiming is something that I would like to see implemented in more games in the future.

A huge missed opportunity for Fated was the use of the PlayStation move controllers, or lack thereof. With so little controls built into the game, other than raising your arms, Fated would have benefitted greatly from the inclusion of motion controls. This would have helped immensely in obtaining the level of immersion that I longed so much for and made for a much more enjoyable experience. The omittance of this feature is a real shame, especially, after seeing the game make such strides with the use of the VR headset itself.

Fated: the Silent Oath didn't allow me to become the Viking that I dreamed of being, but there is a decent experience mixed in with the game's poor gameplay elements and innovative controls. While I might have been able to feel a connection with the characters, the constant lack of immersion dampened what could have a been much more satisfying game.

Zach has been a gamer ever since he picked up a PS1 controller and played Asteroids for the first time. From FPS games to Point-and-click adventures, Zach knows no genre that he can't get into. When not playing games, he spends his time looking at the newest computer components on the market and dreaming of a day when he can buy them.
Related Articles: Fated: The Silent Oath
Share
Tweet
Share
Submit