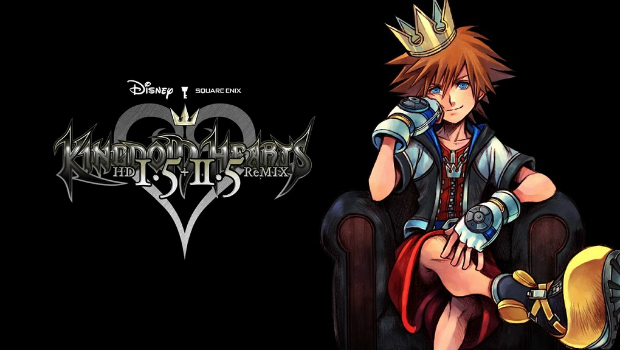 Kingdom Hearts was a communal experience for me and my friends. We played the game at the same time, and discussed various plot points and secrets at extreme length. One of my most vivid memories of youth is my group complaining that we’d never get to play the fabled “Final Mix” version of the game, only available in the video gaming mecca of Japan. Disney, by contrast, was an ingrained American staple, and it was baffling that the company wouldn’t bring these re-releases over here for a while. If there were any a time we deserved the extended version, this was it.

Now, all these years later, I do not even recall what made the difference. Kingdom Hearts 1.5 ReMIX and 2.5 ReMIX came and went without much of a notice from me. All this time detached from the original release, something that has been with me since I noticed an announcement in a now ancient Tips and Tricks magazine, I just don’t have the same zeal that I once had for this great series.

1.5 + 2.5 ReMIX is a presentation of 6 Kingdom Hearts titles. Kingdom Hearts 1 and 2 are both given in their Final Mix form, meaning they are full of extras that were not included in the original U.S. release. Their “bridge” game (and remaster of a remastered remaster) Re:Chain of Memories is included, as well as the opening story of Ventus, Aqua, and Terra in Birth by Sleep Final Mix.

All four of these titles are full games, with bonus materials beyond the originals. Lastly, a collection of cutscenes and retelling of game events are provided for the Kingdom Hearts titles “358/2 Days” and “Re:Coded”, both originally Nintendo DS titles. These collections are actually fun to watch and tell the overall story well. For those confused about certain characters and how they fit within the overall storyline, these manage to provide a lot of information very quickly.

However, the real meat of this release lies in the full game experiences. All upscaled to a shiny patina of their originals, each game bears a signature style stamped on the original game’s brilliant production. The graphics are incredibly detailed and clear; I love how the scenery of the game looks new again, and appreciate what appears to be a further upscaling from the last re-releases.

Kingdom Hearts is a story that thrives on being complicated, but focuses on Sora, the Hero of Light, as he goes through trials, tribulations, a deep memory-deprevated sleep, and several Disney villains just to get back home to his beloved friends. Kingdom Hearts shows the start of Sora’s journey, as he, Donald Duck, and Goofy travel to different Disney realms on a noble adventure.

The interquel Re:Chain of Memories is up next, and is the least impressive of all. It has never held up to the other games in the series, and still lags behind here. The implementation of a strange card system and very small rooms make this game less than perfect. It’s a game that bridges the two numbered titles together, but hasn’t really aged well.

Kingdom Hearts II, on the other hand, is one of the greatest games ever made on PlayStation 2, and still holds up all this time later as a fantastic and diverse experience. With a focus on dramatics and smooth controls improved on the original, I still enjoy every moment of this title as I did back in the original days. With the Final Mix version including some memorable boss battles, I had some great fun jumping back into the fray of probably the best game of the series so far.

Lastly, the Birth by Sleep remaster has a layout and play style that is tell-tale of its handheld origins, and I think that is a positive for the title. Unlike Re:Chain of Memories, which was remade for consoles entirely, this game captures the feel of the original. While it’s still attached in its PSP roots, it doesn’t feel hampered by them. This game is one I never was able to play before, and so the tale of Ventus, Aqua (who stars in the Kingdom Hearts 2.8 teaser game) and Terra is a fresh one for me.

I feel like that is the primary function that this release can give. Players who need a refresher, or those who stopped playing after Kingdom Hearts II, can get fully caught up with the story, characters, and the outline of a plot that links all of the games together. Outside of this, however, we basically have a shined up repackaging of two previously repackagings.

I’m happy to have all of these games in one place, sure, but with nothing new provided, this is something that only reminds me how long it has been. That certainly makes me ready for Kingdom Hearts III, but at the end of the day I can’t find much reason to get excited for this collected release. I, however, am a Kingdom Hearts lifer, and would gladly recommend this to anyone willing to check it out after all these years.

Those new to the series, or anyone who hasn’t played Kingdom Hearts after 2005  have no reason at all to look anywhere else. This release is a very complete collection with all 6 provided titles being of high quality, and can’t be judged fully negatively on the merits of being a repeat. It certainly cannot be fully overlooked, either.

After you defeat each game (or play through the cutscene collections) you are gifted with a theme based on the game finished. I love this feature, a nice little bonus that adds to getting through each title. Defeating the games on higher difficulties can also provide bonus videos and other content. Each game is rife with special bosses, weapons, and items that are a staple of the series.

The most cherished part of the game series for me is the music. The music of Kingdom Hearts is beyond wonderful, with the series themes “Simple and Clean” and “Sanctuary” sandwiching some of the most gorgeous orchestral and piano music you’ll ever here in a game or anywhere else. To add to this, iconic music from Disney films fill the game as well. If nothing else, it is just sublime to be surrounded by the music of these games again.

Kingdom Hearts HD 1.5 + 2.5 ReMIX is a collection that can provide countless hours of RPG action and mixes Square Enix’s brilliant esoteria with Disney’s magical childlike wonder into a story unlike any other. It is also a collection of games that have been around for years, and provides little new content to long time fans. Brilliant is a word to describe the content, albeit familiar, but a little refresher may be just the thing to get you fully amped for the future of the series.

Patrick Rost has been with Gaming Trend since 2013. At first focused on sports coverage, Patrick has gone on to cover a wide range of games and other products for the website. Outside of Gaming Trend, Patrick writes and records music, grinds perpetually in Elder Scrolls Online (PS4), and lives day to day with his two dogs, Bob and Stella.
Related Articles: Kingdom Hearts HD 1.5 + 2.5 ReMIX
Share
Tweet
Share
Submit