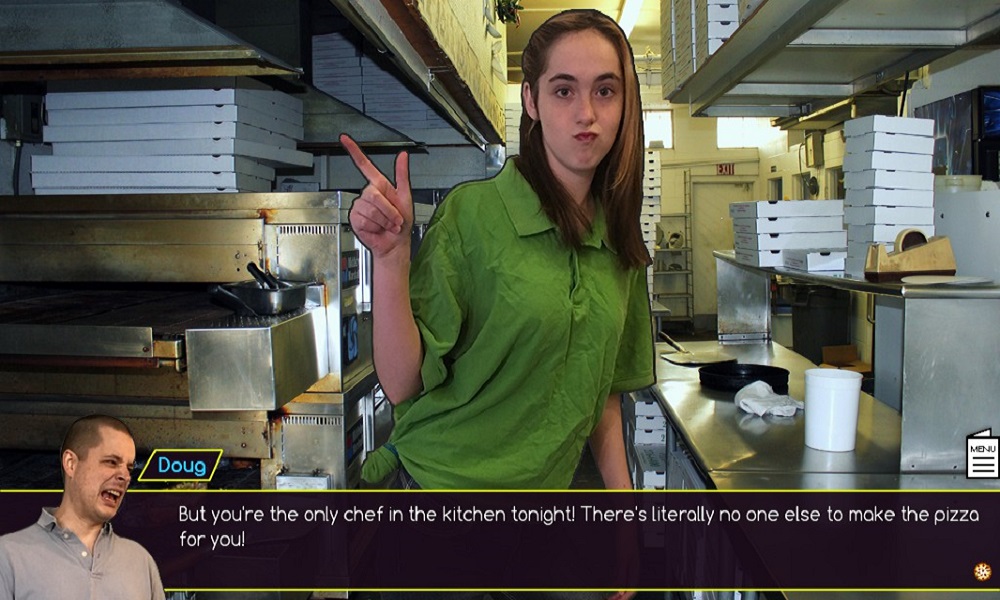 I’ve yet to play some of the classics of the genre, but I do appreciate a good visual novel here and there when I just want to kick back and read for a while. The Japanese market has the leading entries in the genre, but western developers have had a little success with making visual novels of their own; I personally enjoyed Long Live the Queen and Ace Academy, with the latter having full voice acting. Oh, a Rock! has recently released its newest visual novel, The Pizza Delivery Boy Who Saved the World, and while it does have a slightly cheesy premise, its dreadfully short runtime mixed with ineffectual choices make for an undercooked experience.

The Pizza Delivery Boy Who Saved the World puts you in the role of a delivery boy who’s in his 20s; while he has a default name of Doug Rivers, you can rename him, and I just changed his last name to Judy to celebrate the new season of Brooklyn Nine-Nine. While working at a pizza place with apathetic coworkers and an abusive boss, he comes across a future version of himself that’s visiting for reasons unknown. Doug has to juggle his delivery job as well as figure out why a time-displaced counterpart is at his house. I’ll admit, the overall plot is humorous, and did elicit some chuckles from me, but the rest of the game gets a little burnt on the crusts.

The Pizza Delivery Boy Who Saved the World mimics the style of classic Japanese visual novels, as there are static backgrounds, but real-life photographs in lieu of sprites. This style is actually interesting, as it contributes to the over-the-top vibe the game is trying to achieve. I did like the oddly wooden poses each of the characters had, and the mood felt like a cheesy full-motion video title ala Night Trap. However, save for the main character, the rest of the cast is one-note and unlikeable, whether it be the millennial employees, the impatient customers, or the “totally a villain but let’s pretend like he’s not” villain. You do get a recurring character in the form of Finley, who’s a well-meaning customer but is obviously hiding something later in the game.

Even more unfortunate than the cast is the structure of the visual novel. While some of the best games in the genre are scant in gameplay, they make up for it with an abundance of text, characterization, and branching storylines that last dozens of hours. The Pizza Delivery Boy Who Saved the World has none of that, as it fundamentally only has one path from which to choose; in fact, there are only two choices where you can potentially die, and it’s rather easy to avoid them (though you’ll need to do it at least once to grab an achievement). Normally, one path isn’t a problem, except for the fact that the game is less than an hour long, and that’s a generous estimate.

The game is pretty linear as well, as I did multiple playthroughs and ended up going to the same places and doing the same activities regardless. For example, some deliveries couldn’t be completed until later in the night when I had to return to the pizzeria. Ineffectual choices mixed with a strictly linear path are a no-no, and fundamentally ruin the end product. There isn’t much left to say, but The Pizza Delivery Boy Who Saved the World misses the mark.

The Pizza Delivery Boy Who Saved the World

The Pizza Delivery Boy Who Saved the World aims to be a cheesy but endearing visual novel, but with a very linear story and a host of other problems, it unfortunately needs some more time in the oven to get baked properly.

Elisha Deogracias is an aspiring accountant by day, freelance writer by night. Before writing for Gaming Trend, he had a small gig on the now defunct Examiner. When not being a third wheel with his best friends on dates or yearning for some closure on Pushing Daisies, he's busy catching up on shonen manga and wacky rhythm games. Mains R.O.B. in Smash. Still doesn't know if he's a kid or a squid.
Related Articles: Indies, The Pizza Delivery Boy Who Saved the World
Share
Tweet
Share
Submit