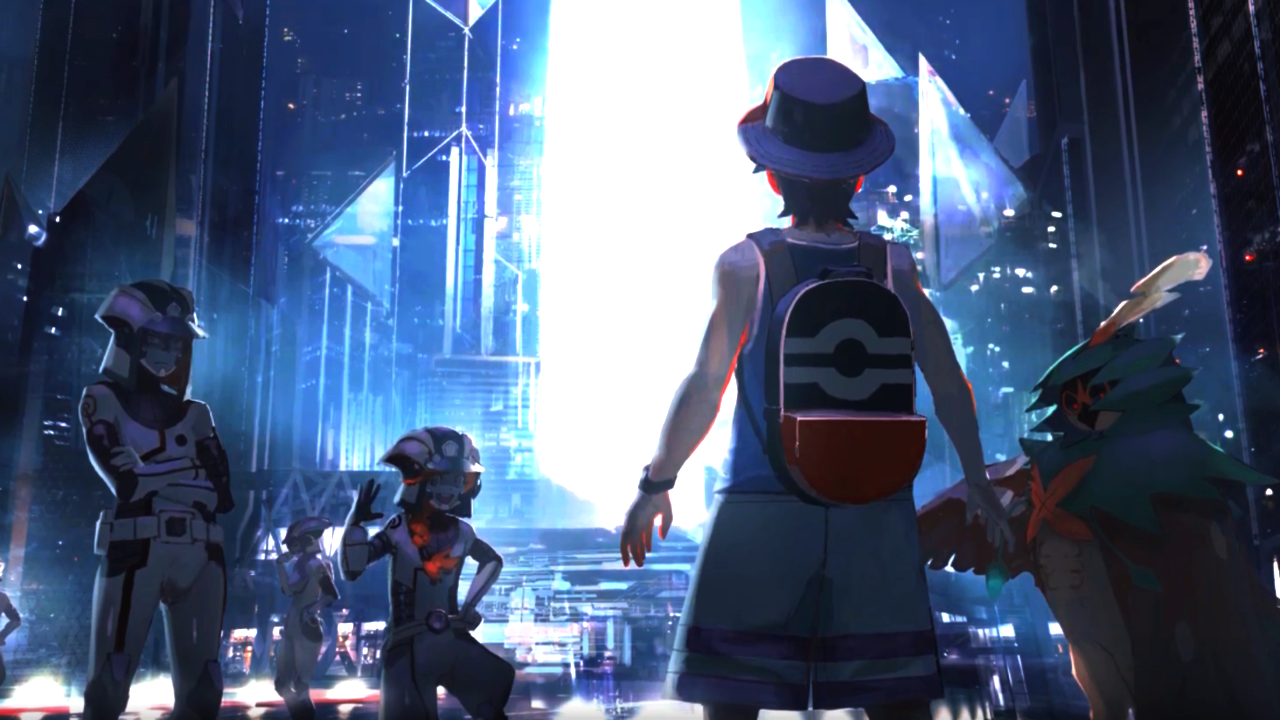 Pokemon Ultra Sun and Moon came with a huge deal of hype, with Game Freak promising a new plot, new minigames, and a whole new experience, teasing fans with the phrase “This is not the Alola you thought you knew!” I went into Ultra Sun and moon with a head full of expectations, remembering my love of Pokemon Black 2 and White 2, which offered players an entirely new story and fresh experience in the Unova region. I snatched up my fire kitten starter, to match my versions sun lion legendary, and as soon as Pokemon Ultra Sun landed on my DS, I sprinted my way through Alola as fast as my sandaled feet would allow. Unfortunately, the trip didn’t go at all how I expected.

Things started out great, I whizzed through the newly streamlined opening of the game and picked my partner Pokemon in no time. It was a great change because, let’s be honest, that opener was a little cantankerous in the original versions. With Litten at my side, we walked a very familiar path, making our way across the Alola region, finding minor but noticeable changes here and there.

Then two members of the Ultra Recon Squad appeared.

I leaned over my DS and drank in everything they had to say. With the early part of the game being so familiar, I was ready for a new and different adventure to start; I was ready for the plot to diverge, to make my way through wormholes, and to warp space-time itself in order to save my world, as well as the world of the Ultra Recon Squad. They explained why they were here, they explained how they needed to understand Alola’s light. I was ready to do my part, to lend a hand.

Then the Ultra Recon Squad left.

This pattern continued throughout the rest of my barely-changed second trip though Alola: A minor change in text here, a different Pokemon to fight there, the arrival of the Ultra Recon Squad as they talked, mostly among themselves, and left, taking their shoe-horned in plot line with them. Don’t get me wrong, their story had great potential to create a truly different, exciting experience; focused on light and auras, which impact both Z moves and Totem Pokemon. There was some real potential to disrupt the entire fiber of the game mechanics, to change the whole game by taking away your ability to use Z moves, to cripple Totem Pokemon, disrupting the very ecosystem around which the Alola trials were built, but these opportunities were never seized upon.

The tacked-on, inorganic nature of the storyline for the Ultra Recon Squad felt especially obvious after what should have been a world-changing point in the game. They had just suffered a major betrayal by their one ally in the Alola region, and vent their frustrations and fears to the player. Their passionate words fall pretty flat, due largely to their rather mechanical way of speaking and the fact that their faces are covered, making it difficult for you to connect to these characters and read their emotions. They speculate as to why this person would betray them, explain the peril that both worlds are now facing, and express their need for help. Their need for a hero. If someone doesn’t save the light of Alola, then it will fall into darkness, and they will never learn how to bring light back to their own realm. Someone has to stop this disaster. Someone has to save everyone. Someone.

“Well, we’d best be going,” the characters say before saluting and marching away.

I was left stunned and confused, told to continue my Island Challenge as if the fate of the world itself wasn’t hanging in the balance. Is this what being a side character feels like? I dutifully continued my trek across Alola, having made a liar of myself when I said, just a few minutes before, “I think I’m about to get to something new!” I spent ages waiting for the plot to diverge, but I did not encounter any major story differences until I had logged a whopping 32 hours worth of gameplay.

The original versions of Pokemon Sun and Moon focused on relationships and family, and was the Pokemon installment which most succeeded in making me care about the other characters in the game. I spoke about how touching and fulfilling the end of the game was in our Pokemon Sun and Moon review, and this feeling of bonding was a direct result of several touching cutscenes where you travel between islands and experience new places along side Hau, Professor Kukui, Lilly and your other Alolan companions. These strong connections, so carefully crafted in the originals, are destroyed in Ultra Sun and Ultra Moon, both through the change in plot and in new features, such as the surfing game.

One of two new mini games introduced in Ultra Sun and Ultra Moon, Mantine Surf urges you to travel between islands in a game of skill while standing on the back of a Mantine. Full disclosure: I play Pokemon games because I adore its strategy and turn-based gameplay; I neither expect nor want tests of skill, speed, and timing from the franchise. Unfortunately, that’s exactly what both the new mini games, Surfing and Ultra Wormhole Travel, are. While surfing, you must build up speed by surfing up and down a wave, avoid objects in the water which will slow you down, jump off the top of the wave, perform tricks while in the air, and finish your tricks before landing in the water again, or you will be penalized and fall from your Mantine. I eagerly jumped at the first opportunity to try out surfing, only to discover that I had decided to make the trip between islands solo, so I didn’t get to experience the excitement and scenery of approaching Akala Island alongside friends… and I still haven’t gotten good enough to meet that surfing Pikachu.

Ultra Wormhole Travel likewise requires skill and timing, and requires you to navigate by using the motion controls of the 3DS, making it feel rather like Dream Radar game from Pokemon Black and White. By tilting your 3DS up and down, and moving it side to side, you ride a legendary Pokemon through a wormhole, nabbing orbs which allow you to speed up and travel farther, while avoiding shock orbs which will slow you down, all while keeping an eye out for ‘rare wormhole’ openings, which look slightly different depending on how rare they are. Getting your hands on all the legendary Pokemon will require you to master this minigame, as legendaries only lurk behind the most rare of exits. You’ll also need a copy of both Ultra Sun and Ultra Moon if you want all of them, as these monsters are divided up, with half being exclusive to Ultra Sun and the only half only attainable while playing Ultra Moon.

Pokemon Ultra Sun and Ultra Moon feels more like a glorified DLC rather than a full fledged game. It’s like playing Pokemon Yellow, with the Ultra Recon Squad filling the role of Team Rocket, except you still don’t get an adorable yellow creature following you around and making faces whenever you talk to it. While there are some cute new features, Pikachu’s Beach is adorable, and some minor alterations to things like the lineup of the Elite Four, the content simply doesn’t feel like it was worth starting all over for. Perhaps its greatest fault is that it did not live up to its own hype, and that by creating two separate versions of the game, Game Freak invited comparisons with Pokemon Black 2 and White 2, games which offered an entirely new story and a new set of faces faces, while only delivering a third-game experience more akin to Pokemon Yellow.

When Pokemon Ultra Sun and Pokemon Ultra Moon was announced, I, like Kay, expected something along the lines of Pokemon Black 2 and White 2. As more information was revealed, it seemed that Ultra Sun and Ultra Moon would be parallel stories instead of a sequel. At first, this seemed fine, as each bit of information seemed to create an interesting batch of content. Of course, almost all of this content is post-game, with the exception of the Ultra Recon Squad and the Battle Agency.

There are several cute additions to the game such as the ability to answer questions the Rotom Dex asks as well as the Rotom Dex initializing a short but sweet cutscene whenever you encounter a Pokemon you’ve never seen before. Another function to the Rotom Dex is the Roto Lotto, a chance a few times a day to receive a special power from Rotom such as faster egg hatching, more experience, or even more prize money after winning a battle. Think of it as a glorious return of the O-powers from Pokemon X & Y.

However, for every quality of life improvement, there is a problem that goes completely ignored. Most of the cutscenes in this game are almost directly from their predecessors, and if you thought they were sluggish in Sun and Moon, having to go through the cutscenes a second time without the option to skip is brutal. Z Moves could also benefit from the addition of a skip button.

There are several small changes that makes this game too difficult to just do a DLC episode for. Several of the Totem Pokemon have been completely replaced, which led to me being destroyed as I was preparing for another Pokemon. This was a step in the right direction, but there could have been more work done for more improvements. Sun and Moon confirmed that there were several captains succeeded by others based on different types. While there was the addition of another trial, we could have had more effort put in to make the island challenge feel fresh in this supposed alternate dimension.

Most of my issues with Pokemon Ultra Moon were not with what was added, but what wasn’t. I was disappointed by the squandered potential of making another great sequel, rather than a third-version game split among two games. But, there were still some surprises that made the adventure more interesting a second time around. The Pokedex for each region has been revamped, allowing me to carry Pokemon such as the dark-type Zorua on my team. In the end, I felt underwhelmed about Pokemon Ultra Moon and it only made me long more for the inevitable Pokemon Switch.

Pokemon Ultra Sun and Ultra Moon aren't bad games, but they are victims of their own hype, which they fail to to live up to. While the plot has changed, these alterations are minor, thrown together, and ultimately do harm to the experience. Despite the addition of two new mini games, a few new features, and a different post-game, they are simply not as enjoyable as their Sun and Moon predecessors.