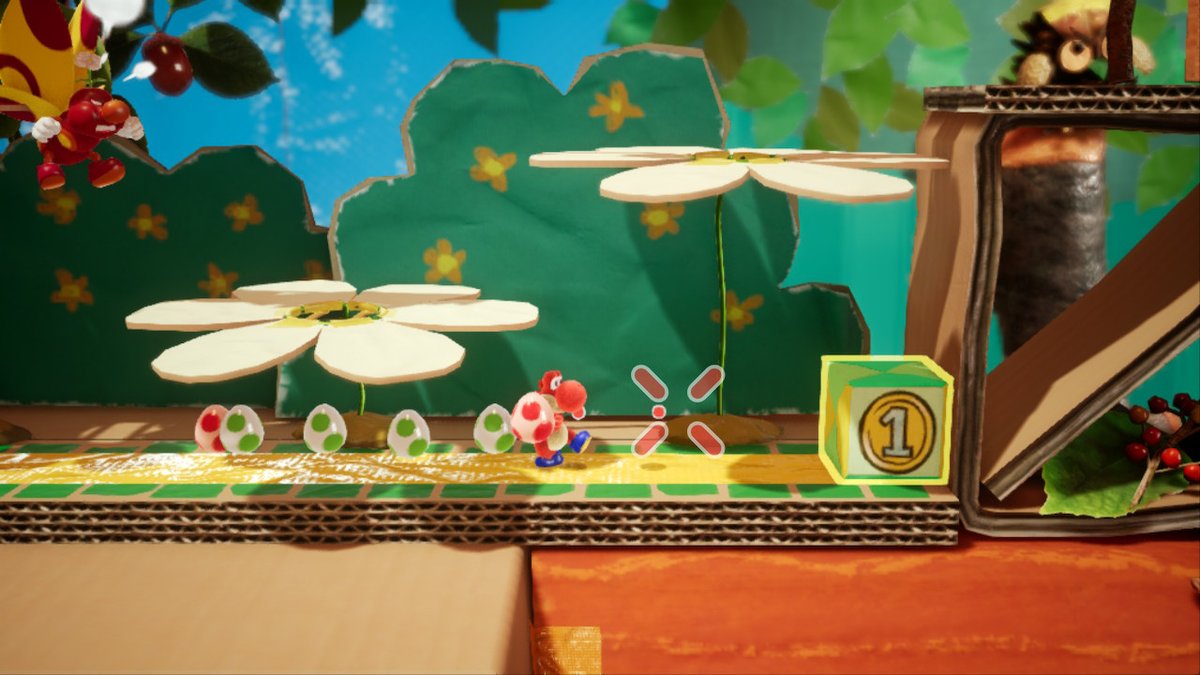 Yoshi’s Island on the SNES is an undeniable masterpiece. From its innovative gameplay to its gorgeous aesthetic, many people, myself included, herald this title as one of the best 2D platformers of all-time. Since that game’s release, the Yoshi series has built a name for itself by chasing that same Super FX-dragon, trying (and largely failing) to recapture the magic of the SNES original. Even Yoshi’s Woolly World, the best-received Yoshi title of the modern era, felt incredibly derivative of that first game. That said, Yoshi’s Crafted World, unlike the Yoshi titles that have preceded it, isn’t beholden to the tenants of the series’ past. As such, with room to experiment and chart its own course, Yoshi’s Crafted World is not only the best Yoshi title since the original, but also one of the most satisfying 2D platformers in Nintendo’s entire catalog.

From the moment Crafted World begins, one of its strongest aspects is immediately apparent: its gorgeous aesthetic. The arts and crafts motif is nothing new per se, as titles such as Kirby’s Epic Yarn and Paper Mario: Color Splash have already explored what can be done with this style. However, never before has a game utilized this aesthetic with such an attention to detail. Not only is absolutely everything in the game forged out of arts and craft supplies, but the myriad materials and intentional imperfections (such as being able to see the nutritional facts on the back of a cookie box used as a platform) lend the game such a sense of, surprisingly enough, realism. Often art styles such as this can come off as overly sterile, but the assembly of these levels has a true hand-crafted feeling which sells the experience that much more. However, a great aesthetic means very little without a great game beneath it, and Yoshi’s Crafted World very much has both style and substance. 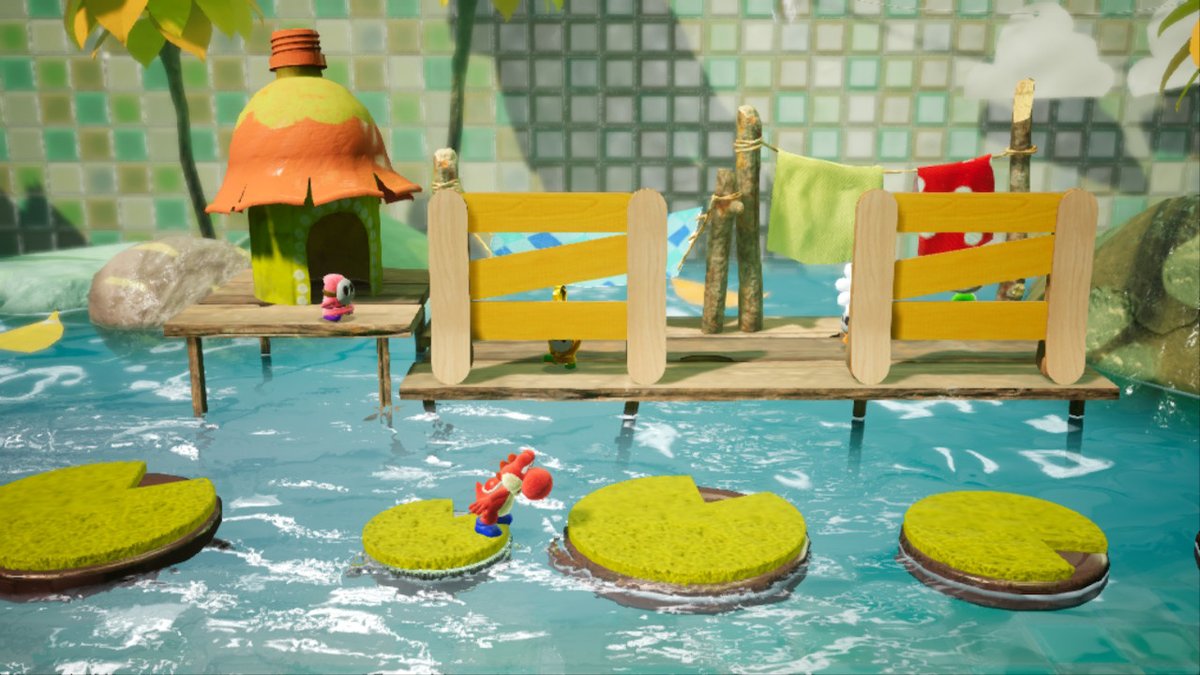 The crux of Yoshi’s Crafted World’s success is its tumult of new ideas, and by extension, the failure of past Yoshi games lies in the absence of these ideas which Crafted World has in abundance. By and large, the previous Yoshi titles have attempted to take what already worked, and just make it work again. In fact, this is an issue that pervades the lion’s share of Nintendo’s 2D platforming seres, Mario and Kirby being stark examples. It seems that the mantra of, “if it ain’t broke, don’t fix it” informed much of Nintendo’s platformer design philosophy for many years. In Crafted World, however, that philosophy is antithetical to this title’s design.

The game is split into numerous three-level worlds, each with its own visual motif and gameplay concept. I was constantly impressed by the sheer scope of new ideas presented here, and more so, the fact that the lion’s share of Crafted World’s concepts are entirely its own. From shinobi castles to horror cities, the locales featured in the game truly take Yoshi out of his typical surroundings which makes for a much more engaging gameplay experience. Bolstering this sense of freshness are the aforementioned new gameplay mechanics, which range from taking part in egg-based shooting galleries to swallowing magnets to use as platforms. There are even vehicle sections that entirely change the flow of the game, yet never compromise the overall experience. Much like how the disparate mediums used to create Yoshi’s arts and crafts world coalesce in a wonderful patchwork of creative design, the disparate level motifs and gameplay mechanics meld into a seamless 2D platformer bursting with variety and fun.

Make no mistake, though, Yoshi’s Crafted World is a 2D platforming collect-a-thon through and through. This is neither a net positive, nor a net negative. By design, Yoshi’s Crafted World is a breeze for those looking to simply reach the end. The true challenge comes in examining the game’s levels to uncover all its secrets: from red coins to smiley flowers. As someone who simply enjoys existing in the Crafted World’s universe, I’m perfectly happy to replay levels to dig up these items. That said, it is important to note that those not inclined to hunt down collectibles will find their time with Crafted World decidedly truncated. 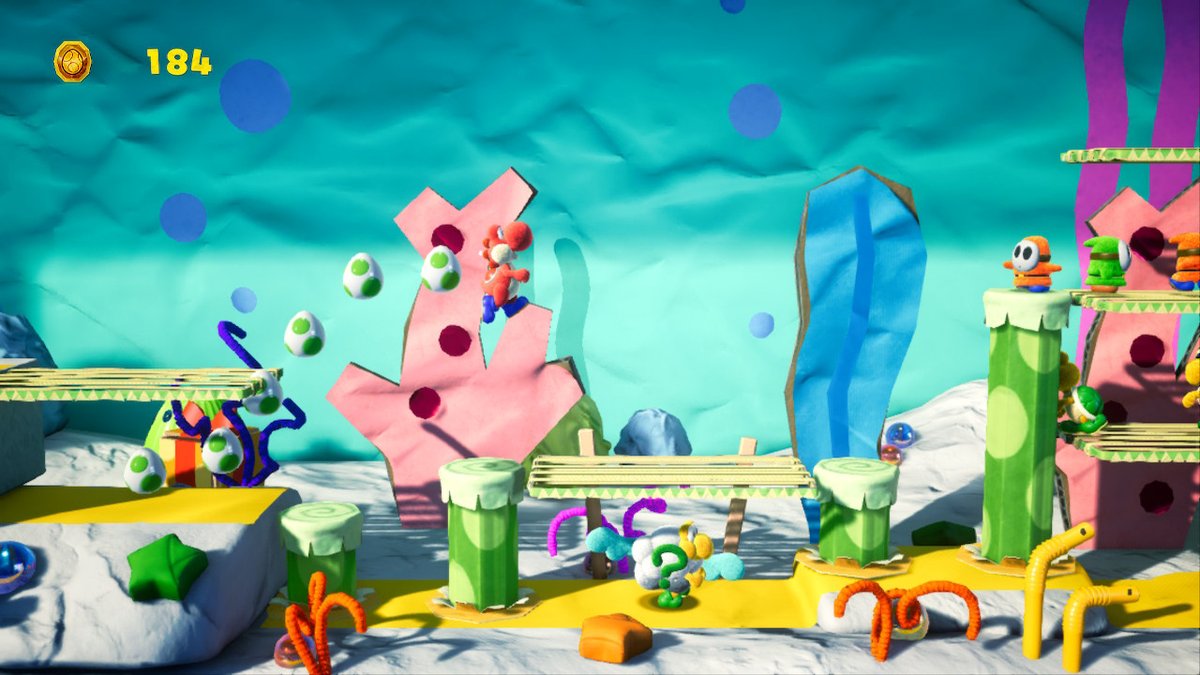 Outside of collectibles, Crafted World’s replayability is bolstered somewhat through the game’s commitment to inverting the 2D platformer formula. This is accomplished in part by allowing Yoshi to enter the coveted “Z-axis” allowing for exploration of both the foreground and background. This lends the entire game a stronger sense of place and scope, bringing the world to life to an even greater extent. That is more of a tangential point, though, as the game’s larger spin of the 2D platformer formula has a more direct effect on replayability: the flip-sides.

Essentially, each level can be played both forward and backward. Forwards, the name of the game is collectibles. Backwards, the levels become a time-attack challenge, daring the player to race back through the stages, trying to find three Poochy pups while maintaining a competitive time. From a design perspective, the fact that the levels are just as enjoyable backwards as they are forwards is a testament to the creative minds at Good Feel. From a gameplay perspective, these challenges add a satisfying duality to the experience, asking the player to speed through the stages is antithetical to the pace of the regular stages, which is a refreshing shift.

Yoshi’s Crafted World is far from a perfect game, though. The game has two core issues: its soundtrack and its co-op. To speak first to the soundtrack, it is fairly grating. The issue arises from the fact that Crafted World takes a page out of Yoshi’s New Island’s playbook (which, by the way, is never a good move) and takes a few central themes and remixes them using different instruments across myriad levels. While thankfully devoid of New Island’s ear-melting kazoos, the soundtrack simply repurposes the main theme far too often to be enjoyable. Even though the arrangements do fit the atmosphere of the levels they’re used in, the novelty wears thin very quickly and your ears just start hearing the main theme, cutting through the aesthetic of the mix. I wish that Good Feel had gone the extra mile to compose a full soundtrack for the game, as it would’ve made Crafted World feel that much more alive. 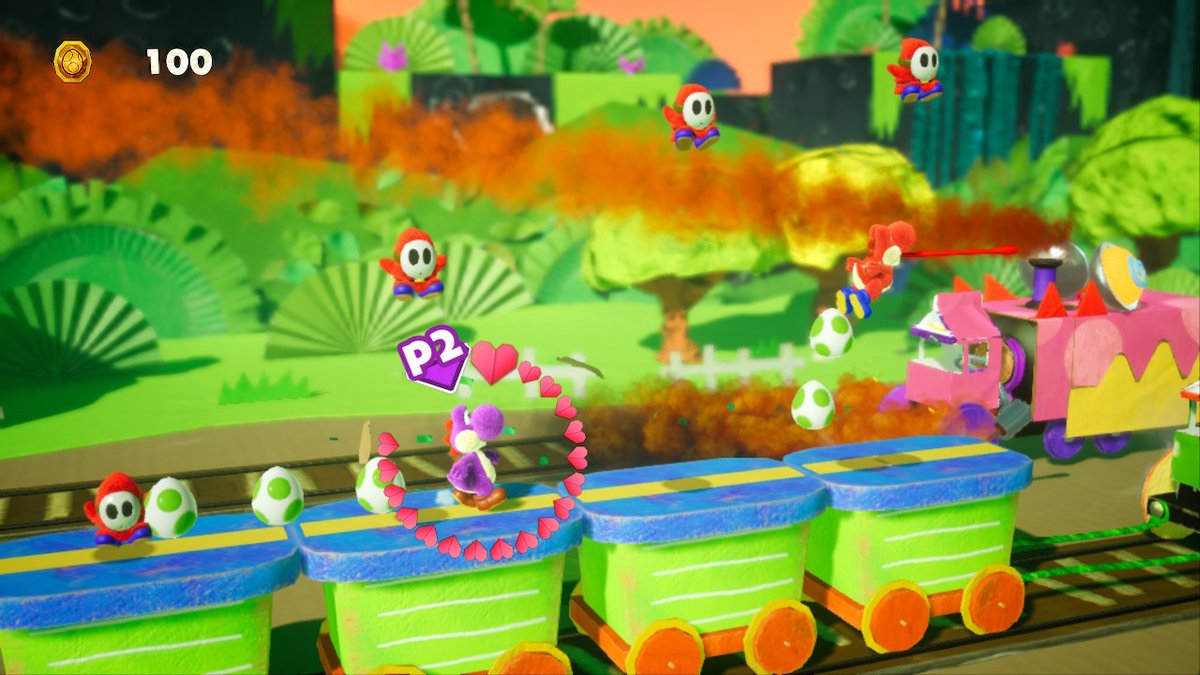 While I can understand the intention behind the handling of Crafted World’s soundtrack, its co-op issue is simply baffling. A new mechanic is introduced in this title in which a player can jump onto the back of another player to get an assist. In concept, this is a fine idea. In execution, it significantly dampens the co-op experience. The problem is, to get on a teammate’s back, all you have to do is land on them. There is no button input. Unfortunately, getting saddled with your partner means that your jump momentum is killed, and you can no longer throw eggs. The player on the bottom also cannot get the player on top off of them. So, in a game designed first and foremost around single-player gameplay, the levels often don’t allocate enough space for both Yoshis. As such, there is a lot of unintentional saddling up, which truly hampers the flow of the experience and can lead to missed collectibles.

Even with those issues in mind, Yoshi’s Crafted World is an absolute treat. As someone who has grown increasingly disenfranchised with Nintendo’s modern crop of overly homogenized 2D platformers, Crafted World is a return to form for the genre. The game has in abundance exactly what titles like New Super Mario Bros. U and Kirby Star Allies lacked so dearly: raw creativity. From its surprising level motifs to its innovative gameplay concepts, Crafted World boldly takes Yoshi to a new level.

Yoshi’s Crafted World is a refreshing, modern 2D platformer from Nintendo that, for once, truly feels new. From its gorgeous aesthetic to its myriad creative level motifs and gameplay ideas, Crafted World embodies the spirit of fun. While the game’s soundtrack is decidedly lackluster and its co-op feels underbaked, this is undeniably the most ambitious and fun 2D platformer from Nintendo in a long, long time.

Abram is an aspiring games journalist with a soft-spot for titles published by a particular company that starts with N, and ends with -intendo. When he's not playing, or writing about, video games, Abram is most likely ranting to no one in particular about various films he's seen, or grabbing the sketchpad to do a bit of drawing.
Related Articles: Yoshi's Crafted World
Share
Tweet
Share
Submit