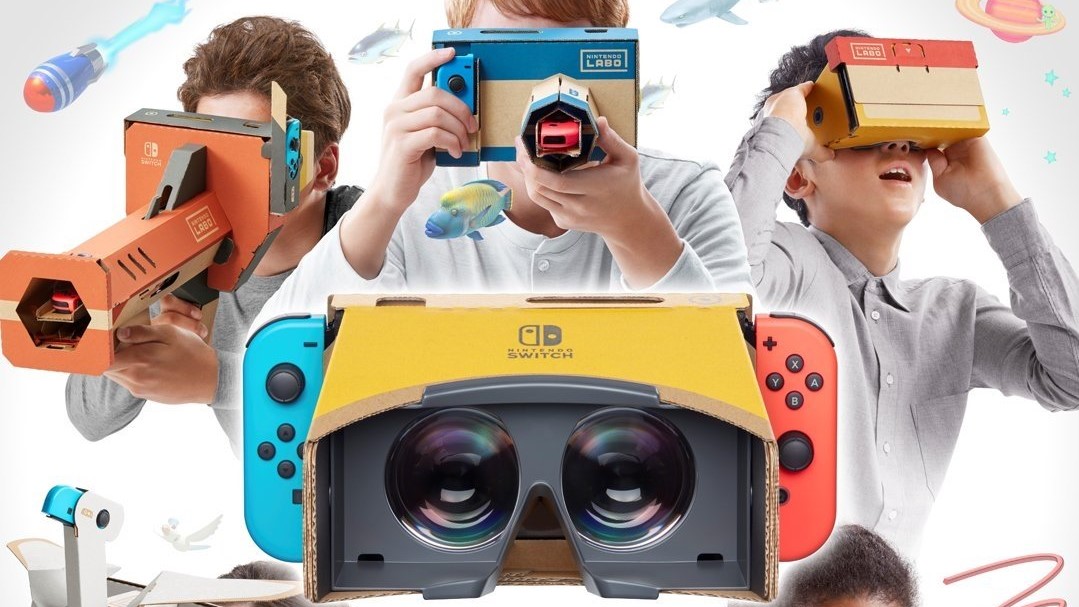 I have an awful feeling of deja vu as I sit down to write about Nintendo Labo Toy-Con 04: VR Kit. Almost exactly one year ago, I experimented with the first Nintendo Labo Kit and came away incredibly mixed. I found the cardboard Toy-Con themselves ingeniously designed and fun to assemble, yet I found the software to be incredibly shallow–not holding my interest much longer than an afternoon. Currently, if I had to put my hands on my Toy-Con Piano, I’d have to root around in my closet, as those cardboard contraptions have long since been packed away and forgotten. Unfortunately, three Labo kits later, it doesn’t seem as though Nintendo has learned anything from the previous Labo releases, leaving Labo VR subject to the same strengths and weaknesses of its predecessors.

Things aren’t all bad, though. From the first moment I opened the Labo VR box, just from the scores of cardboard sheets waiting to be assembled, I could tell that an incredible amount of engineering went into the Toy-Con themselves. And, as I put them together, my suspicions were confirmed. Each is surprisingly complex, yet easy to put together due to the game’s in-depth, yet methodical to a fault, instructions. The on-screen manual that leads the player through the building process is robust and helpful while also remaining light-hearted and enjoyable due to some truly great writing. The issue, though, is the instructions are sometimes too verbose, dragging on through very self-explanatory processes, such as how to crease the cardboard, as if folding along the lines wasn’t obvious enough. While this pace and level of detail is great for the younger demographic, it would’ve been great for Labo to allow more experienced builders to skip steps they deem unnecessary–as the current fast-forward option isn’t nearly fast enough. 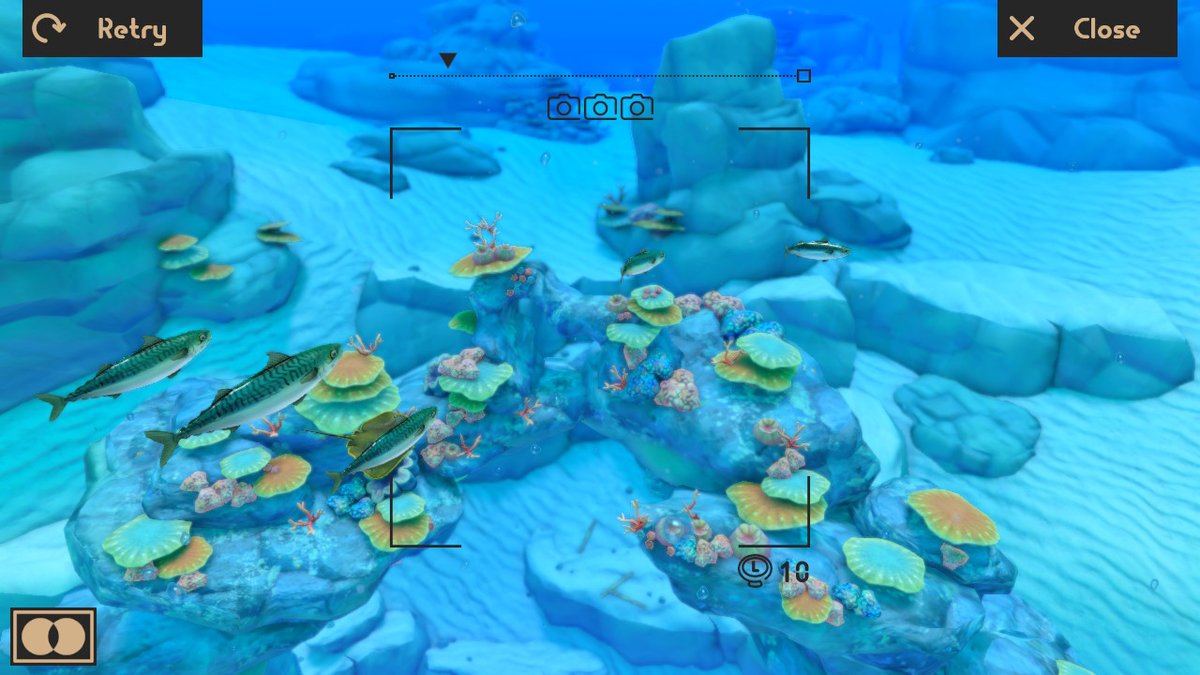 Quibbles over pace aside, there is a certain, inherent magic to building Nintendo Labo. Watching a box full of cardboard turn into a bird, a camera, or a blaster is unlike any other process in gaming. Interfacing with both the real-world and the digital-world as you play is quite engaging, and while this is true of Nintendo Labo as a whole, it is especially true of Labo VR. Because of this magic, I found myself surprisingly engrossed in this Labo kit and its accompanying worlds. While you’ll never feel totally lost inside their digital boundaries due to the obviously lower fidelity in comparison to the market’s other VR offerings, the Switch is able to output a stable, albeit low resolution, VR image. Pre-release, some had concerns that the limited technical capacity of the Switch would lead to unplayable VR, but I was pleasantly surprised by what the Switch could do. The level geometry is very simple and the textures can seem very blurry from a distance, however Nintendo’s colorful style and smart engineering produces an experience commensurate to premium Google Cardboard titles. Make no mistake–this isn’t high or even mid-tier fidelity. But it works and is stable, giving me none of the nausea or headaches typically associated with poor VR.

The Switch system alone isn’t what sells the VR experience though. Instead this success is due largely to the aforementioned Toy-Con. Something that rival VR units cannot fully capture is the sensation of participating in virtual activities in a believable manner, largely because developers are restricted by the unit’s respective controller. That isn’t the case here in Labo VR though, because when you’re shooting aliens, the gun you’re using is nearly the same as the cardboard one in your hands. When you’re taking underwater photos and zooming in on fish, you’re manipulating a physical camera. This gives the experiences the added touch of immersion and Nintendo charm they need while simultaneously highlighting the versatility of the Switch and the Joy-Con. Considering that the cardboard Toy-Con are modular, hooking onto a central unit that houses the Switch tablet, it is also incredibly easy to swap out one Toy-Con for another, making Labo VR a great pick-up-and-play experience. 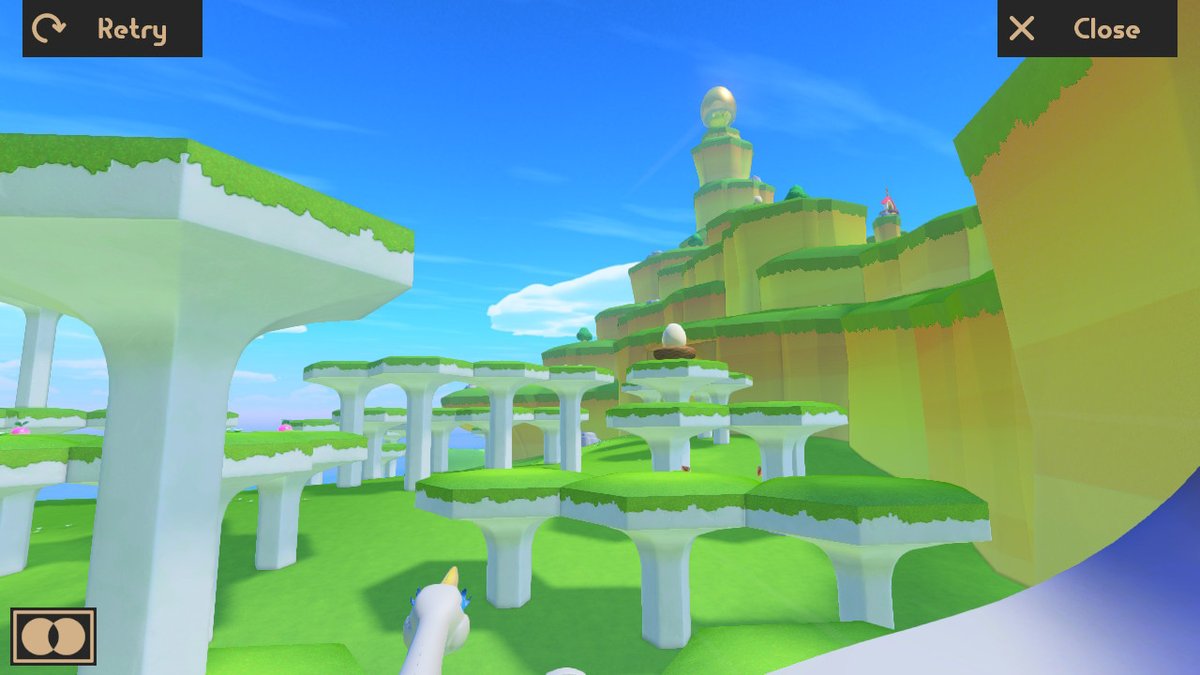 Now, all of that praise centers either around the creation aspect of Nintendo Labo VR, or the top-down experience. When it comes to the software, things take a decided and unfortunate nosedive. The fact of the matter is that the gameplay, nearly in its totality, is painfully vapid. There are some true moments of brilliance here, undoubtedly. The Toy-Con blaster brings with it a fantastically engaging on-rails shooter gauntlet. The Toy-Con Bird in conjunction with the Toy-Con Wind Pedal enables a simplistic yet satisfying flying experience. However, both of these facets of the overall kit are painfully short and offer paper-thin replay value. Sure, you could return for high scores, but when there are only a handful of challenges in each repeat playthrough, there is very little incentive to keep going–especially when the novelty begins to wear off.

Novelty is the greatest issue plaguing Labo VR’s software because it has no legs past the initial curiosity of the experience. Like the Variety Kit before it, the games here epitomize style over substance. You can easily see everything the kit has to offer in just a few hours and that is truly a shame considering how innovative and fun the overall concept of the package is. In many ways, Labo VR’s software feels to me like the early Wii-series software: Wii Sports, Wii Play, et cetera. It serves to demonstrate a universally interesting and fresh way to play games without building a fleshed-out experience, instead allowing the technology to speak for itself. However, the integral difference between the two is that Labo VR is a largely insular experience, whereas the magic of the Wii system could be shared with friends and family. The fun of playing Wii Bowling or Wii Tanks with another person more than made up for the lack of depth in the games themselves. Playing those minigames without another person, though, clearly illustrated that Nintendo’s early Wii efforts were little more than gimmick-filled proofs of concept. 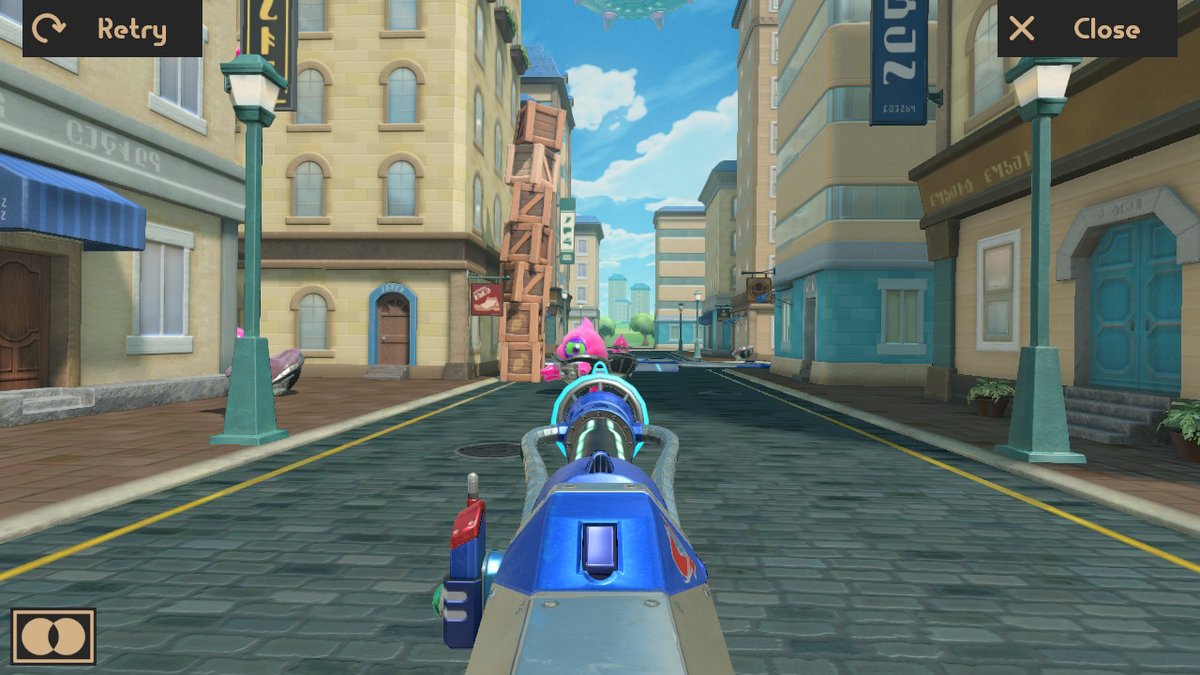 Unfortunately, Labo VR, without any substantive, or even sensible, multiplayer component just leaves the software in an unfortunate place. Just like how I’ll rarely play Wii Tennis by myself, now that I’ve gone through all of Nintendo Labo VR once, I doubt I’ll break it many more times when I’m looking for something to do. To further truncate replayability, I can’t truly share the experience with friends to get more mileage out of the package because of VR’s inherently single-player design. While other rigs offer pass-throughs to allow friends to see on a TV what you see in VR, Nintendo Labo doesn’t offer this same functionality. This makes its few multiplayer modes feel like total after thoughts. Sure, taking turns using the Toy-Con Blaster to shoot fruit into a hippo’s mouth for points is clever, but when you can’t watch your friend play, instead having to watch them have fun in VR without you as they take their turn, there just isn’t much fun to be had here. From a single-player perspective, Labo VR lacks the teeth necessary to keep the player engaged for more than an afternoon. From a multiplayer perspective, the experience is a non-starter and completely antithetical to the insular, immersive concept of Labo VR.

As such, Nintendo Labo Toy-Con 04: VR Kit left me frustrated. Conceptually, using the Toy-Con to build an accessible, tactile VR experience is genius. And, for the first afternoon you have with the product, it is. However, there just isn’t the depth here to warrant keeping the Toy-Con on hand, and without a meaningful way to experience Labo VR with a friend, the package loses its luster incredibly quickly. If nothing else, Labo VR is a proving ground for VR on the Nintendo Switch. For me, being able to experience Breath of the Wild front-to-back in VR is a very tantalizing proposition and one that excites me far more than anything in the current VR package. If Nintendo continues to utilize their IP to add value and genuine fun to the Labo VR experience, my opinion on the package may shift drastically. For now though, based purely off the Labo VR experience out of the box, this cardboard foray into virtual reality feels like little more than a gimmick.

Nintendo Labo Toy-Con 04: VR Kit is ingeniously designed. The synthesis of physical cardboard Toy-Con with commensurate digital software creates a tactile and fun virtual reality experience that feels decidedly Nintendo. However, once the initial magic of Labo VR wears off, all that is left is a shallow, oddly assembled lot of minigames that won’t last more than an afternoon.

Abram is an aspiring games journalist with a soft-spot for titles published by a particular company that starts with N, and ends with -intendo. When he's not playing, or writing about, video games, Abram is most likely ranting to no one in particular about various films he's seen, or grabbing the sketchpad to do a bit of drawing.
Related Articles: Nintendo Labo Toy-Con 04: VR Kit, VR
Share
Tweet
Share
Submit