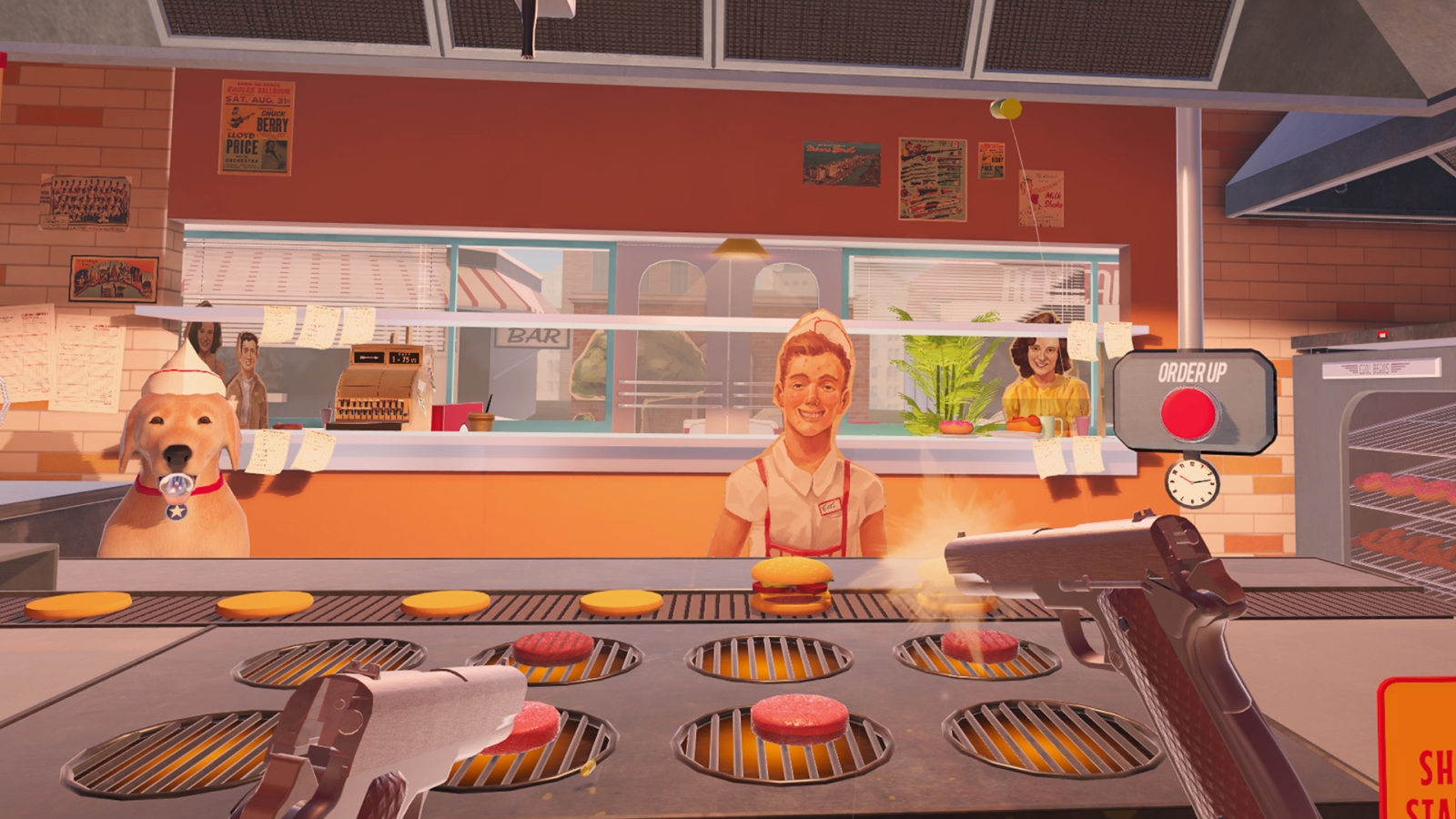 Australian developer Samurai Punk may have just made a game that is as much a polarized political lightning rod as it is a must-play title for VR.  The American Dream aims a satirical gun barrel squarely at the American obsession with gun ownership, and hits the bullseye. The question will be whether you are too much of a snowflake to handle this, or if you can embrace the freedom that is obsessive gun ownership!

The game opens with the player jumping into a carnival-style cart as it rolls through the life of an American gun owner.  Guided by your talking family dog, Buddy Washington (voiced by Michael Dobson of Dragon Ball Z, Sausage Party, and Transformers fame), The American Dream purports that there is absolutely nothing in life that can’t be solved by a gun.  Rather than trying to explain the silliness, here’s the first 35 minutes of the game — you simply have to see it to believe it.

One of the things I enjoyed about The American Dream is that every time you think you’ve see just how ridiculous the game could be, it surprises you by dropping you down another level of crazy.  You’ll clean your room by shooting the detritus scattered everywhere. You’ll use a sniper rifle to communicate with the cute girl across the street. Eventually you’ll need a job if you want to date that girl, and that means earning a paycheck at the local carwash.  How will you clear the mud off these classic vehicles? With a submachine gun, of course!

Making your way through the 20 levels of the game (the latter of which made me literally say “What the fuck did I just play?” aloud, which was immediately echoed by my wife) you’ll end up dating that pretty girl I mentioned earlier.  What’s the best way to show your best girl that you like her? Dancing with a pair of pistols, of course! Every stage of the game is a self-contained vignette marking a moment in your life, from being a baby in the crib to the arrival of your second child.  Amazingly, literally every level of the game is hilarious, as hard as that is to believe, and the three hour runtime (at a $19.99 launch price) is easily worth the price of admission for the experience alone. This is one you’ll show your friends.

Reloading the guns in the game is accomplished by hitting buttons on your arms of the rollercoaster.  When you hit the button, a magazine will pop up in slow motion for you to catch in the magwell, John Wick style.  Similarly, a bolt action rifle requires that you work the bolt, loading a fresh round before you can fire again. I don’t want to spoil any surprises, but the guns are the stars of the show, as you might imagine, but often not in the way you’d expect.

To extend the gameplay a bit, there are American roundels with stars in them (because, freedom!) to find in the environment.  There’s no reward that I saw for finding them, beyond keeping you on your toes to find all of the collectibles, but it certainly keeps you looking.  Unfortunately, that’s all there is to bring you back beyond the eye-widening, often hilarious story. Buddy’s voiceovers never stops being funny, and the story arc is certainly worth experiencing more than once, even if it makes the eyes of conservative folks twitch a bit.

You can guess how bagels get their holes. That’s right — with a hot dose of FREEDOM!

Aesthetically, The American Dream is evocative of traditional 40’s and 50’s style Americana.  All of the people are particle board cutouts with their personas pasted onto the front side, as are much of the set pieces.  Naturally, you’ll be flipping burgers at some point, and that means shooting the grill’s propane arm to turn it on, shooting the burgers to flip them, and then shooting the “order up” button to signal the pimply faced clerk to serve up the freedom burgers you’ve cooked, all the while surrounded by sockhops, malted milkshakes, and more.

It’s not all freedom and flags here, however.  I did run into several issues in the first few levels where the voiceover didn’t trigger, forcing me to back out to the main menu and retry them.  I also had an issue where the bubbles popping at the car wash were 300% louder than anything else, drowning out the voiceovers entirely. I didn’t see this issue in the second half of the game, but there are still a few bugs to gun down.

With a message that is guaranteed to piss off half of the American populous in a hilariously vicious way, The American Dream is one of the most entertaining games in the virtual reality space. What it lacks in longevity, it makes up for in snappy writing, unique aesthetics, and excellent voiceover. Come for the gunplay, stay for man’s best friend, Buddy.

Ron Burke is the Editor in Chief for Gaming Trend. Currently living in Fort Worth, Texas, Ron is an old-school gamer who enjoys CRPGs, action/adventure, platformers, music games, and has recently gotten into tabletop gaming. Ron is also a fourth degree black belt, with a Master's rank in Matsumura Seito Shōrin-ryū, Moo Duk Kwan Tang Soo Do, Universal Tang Soo Do Alliance, and International Tang Soo Do Federation. He also holds ranks in several other styles in his search to be a well-rounded fighter. Ron has been married to Gaming Trend Editor, Laura Burke, for 21 years. They have three dogs - Pazuzu (Irish Terrier), Atë, and Calliope (both Australian Kelpie/Pit Bull mixes).
Related Articles: Let's Play, The American Dream, VR
Share
Tweet
Share
Submit