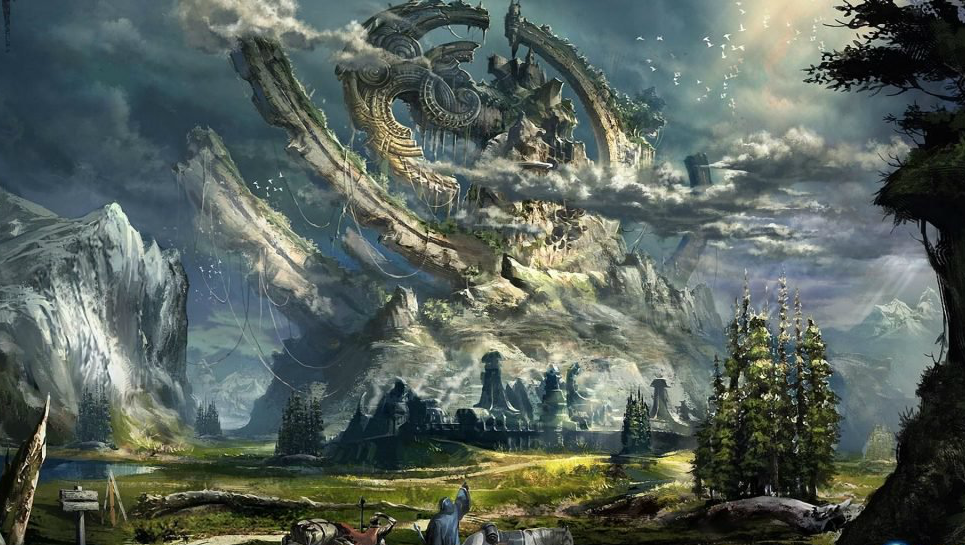 Somewhere stationed between adorable and deplorable is the sweet spot for most gaming culture. Right there in that moist crux is Tera, an MMORPG that combines anime, western fantasy, sex, heroism, and friendship into one big explorable guilty pleasure. Tera provides a sense of belonging to most any style of RPG or adventure game fan through this amalgamation, and the results are mixed but positive for its short and long term well-being.

Tera is a shockingly stupid but endearing game from the very start, and has a sense of fun and wonder that I haven’t felt since I was a kid. That sense can easily, and often does, teeter into asinine and childish. Boasting an intimidatingly large world to explore and some of the best variance between characters available in an MMO, Tera is more than just what’s on the surface.

The world of Tera is inhabited by elves, reptilian warriors, gentle stone giants, magical child sprites, and stumpy animalfolk, all intermixed and working together throughout the world. The races are creative, but not overly creative. The high elves are xenophobes, the waifs are immortal sprites, and members of the cute animal race all seem to have 90s cartoon voices, giving the world a sense of familiarity.

Perhaps the worst thing about Tera is in the body designs for the more humanoid races. The shoulders and upper bodies are massively disproportionate to the rest of the body, and the characters are given these massive turkey breast hands that, in tandem with beef block shoulders, dwarf their tiny little heads to the point where those characters look like busts on elaborate fleshy shelves. These people look bloated to the point of bursting. Why?

That being the worst element of the game does mean that overall we have a nice product to enjoy. The game is fairly beautiful in its design, and reminds me of Fable with a very cartoony aesthetic, where everything sort of has a bouncy castle look to it. The world itself is massive and hard to fathom exploring in full, with just small sections taking forever to ride across and get from place to place.

There is an emphasis on real-time travel, with fast travel limited to certain teleportation nodes found in cities, or the use of special scrolls that take you to a specific place, or just the nearest safe haven. The only drawback is that the game plays excruciatingly slow at times, and these moments of empty travel can drag the action down further. You’ll find yourself hating and loving both how often you’ll get lost fighting random enemies or collecting resources. The game also employs a major transit method in the form of celestial pegasus creatures, who appear to take you between major cities and settlements.

Resource collecting is a frequent part of the game, and you’ll level up in each style of gathering as you find materials in the wild. You can use these materials, of course, to craft usable items and equipment, and you can do this from the convenience of the pause menu, which is nice. You will need to learn recipes along the way to take advantage of your crafting abilities.

Battles are very standard MMO experiences with a battle bar showing a series of special moves that are timed and demand a special rhythm in order to maximize your abilities. Unlike other MMO experiences I have had where the battles are rapid with constant flowing attacks, there is a much more methodical process in Tera, on both sides. Button mashing will get you nowhere here, except dead on a regular basis.

Fighting is also a very different experience from character to character, even within the same designation of tank, damage dealer, or healer. The variance is hard to describe in a review, but the speed and rhythm of each character can make you feel like you are playing entirely different games on each. That is a big plus in terms of fresh gameplay from character to character, but it also means that certain classes are more restrictive in the ways they are played.

The game, while graphically pleasing, is layed out poorly in several ways. The heads up map is small and hard to use to navigate, the mission lists are protruding into the right side of the screen and show all missions, instead of just the active one. Text chat is limited to about 3 lines, tucked into a corner, and is hard to access on the fly. There is text everywhere, labeling almost every item in the game, which is mostly useful except for when it’s labeling things you can’t interact with at the moment. Furthermore, interaction with other characters is a chore due to poor menu design, which is a problem throughout the game and a hindrance with the social aspects.

The world is skittering and over-saturated with players and enemies, making me feel like I’m looking down on an ant farm. Spawn times for certain enemies is instantaneous, meaning you don’t have a moment to escape before the battle keeps raging, and this is so bad that you might end up stuck in one tiny area of the map for half an hour simply trying to avoid the respawning enemies there. The whole thing comes off like a digital viewing of someone’s really amazing miniature figurine collection. It’s pretty, but it is a giant confusing mess.

The game makes up for that saturation with the massively explorable world available. If you ever want to get away from the bustle of highly populated zones, there is plenty of open world to get into, and I love this part of the game in its ability to immerse me in the travels. Without the temptation of fast travel, except in limited capacity, I’m stuck riding the distances between towns, taking in the scenery, meeting with new (non-player) people, and in the end, feeling a small sense of accomplishment having made it to my destination.

Tera doesn’t give you a heads up for most side missions as well, which can be inconvenient, but also means you have to actually do the work of talking with NPCs to get info on who needs help, which further aids in immersing me into the world. The game also has multiplayer dungeons to explore, and while they aren’t much in the way of exciting through the bulk of action, the boss battles in Tera have been satisfying at every turn. Bosses are large, crazy well designed, and have attacks that are hard to dodge and dash through based on great timing and attack pattern.

There are also battlegrounds battles, PVP experiences with different tasks for being the champion. While there are different styles, each is unique and can often have the battlefield balanced by making each player the same base character. The map I enjoyed most had all players controlling baby versions of a rotund 6-story tall boss, all waddle-battling to see who could harm the other’s parent the most. They are silly, but the silly aspects make them more tempting to try than just the standard beef-up and kill each other aspects of most battlegrounds style game modes.

Overall, when you try to take in the full package of what Tera is, you are left with just a question mark. There is a lot to like about the way the game presents itself, the gameplay, and the world which is explorable for hundreds upon hundreds of hours. There is also an overall sense of disjointedness, with a deluge of characters and floods of enemies taking up space, and a goofy aesthetic with certain races and design elements. The game has a sense of well-built continuity despite being such a varied world, style wise, but also is plagued with a patina of befuddling heads up display elements.

Navigating the world is simple and vast, while the menus are hard to navigate despite their limitedness. The sounds of the ambient world are great, with the earth and its creatures humming in a living harmony, but the voices are annoying, and the sound effects the game makes when you complete quests or navigate menus are slightly grating, like a bad ringtone.

Despite the duality, however, I can not help but have a ton of fun each time I play Tera, slowly realizing as I go that this game is entertainment at dead center between good and bad. Tera has a tall task in creating a large and immersive world up from scratch, with little to no nostalgic value to bring people in. I think with this creation, they have a nice foundation for something special.

Tera is silly, lusty, and over-the-top cute aesthetic within a massive MMO world, interspersed with frustrating and bad gameplay elements that punctuate otherwise fun and immersive action. The world is full of perils, and players have a lot of control over the types of characters they’ll use to face those perils. More fun than foul, Tera combines the cartoony and the serious in its attempt to create a worthwhile MMO universe, and accomplishes the underpinning of a great title.

Patrick Rost has been with Gaming Trend since 2013. At first focused on sports coverage, Patrick has gone on to cover a wide range of games and other products for the website. Outside of Gaming Trend, Patrick writes and records music, grinds perpetually in Elder Scrolls Online (PS4), and lives day to day with his two dogs, Bob and Stella.
Related Articles: TERA
Share
Tweet
Share
Submit