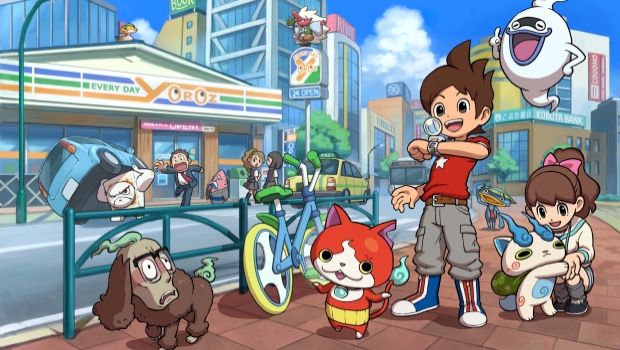 Within an hour of starting up Yo-Kai Watch, I had befriended several ghouls, including a talking cat named Jibanyan who punched cars to get stronger, and a purple anteater named Baku who eats nightmares for food. If that intrigues you, then I have good news: that’s just the surface of the wacky designs that populate the world of this game.

The common phrase that’s been circulating discussion of Yo-Kai Watch is that it’s similar to Pokemon, or that it’s the “Pokemon killer” in Japan. It’s easy to draw comparisons — you’re a young child, growing up in a small town, and your main means of progress is collecting, curating and strengthening your growing army of personal warriors (in this case, ghosts).

But in many ways, forcing it into that comparison does a disservice to Yo-Kai Watch. I’ve played a number of the Pokemon knockoffs, and this is no copycat. Yo-Kai Watch has a fiercely unique design to it, that stems largely from its center-stage players: the many ghosts that populate the town of Springdale, your home.

Exploring the dungeons around time often leads to useful treasure and unique yo-kai.

You start the game meeting Whisper, who acts as your guide and companion, and who also gives you a yo-kai watch — a watch that can see ghosts that are otherwise invisible in the world around us. Whisper is the comic relief of the game, and his dialogue is incredibly fun and keeps the game lighthearted as you travel around your town, unraveling its mysteries and acquiring more yo-kai to summon.

You don’t capture those ghosts through conventional means, though; subduing them isn’t good enough, as you’ll have to win their friendship to earn their medallion, which lets you summon them in battle.

It’s weirdly reminiscent of the Shin Megami Tensei series, where you have to negotiate and strike deals, but here it’s streamlined and simpler. Tossing enemies a healing item or other goodies wins their affection, and heightens the chance they might approach you after a fight. It’s a little odd, but it also keeps it aloof and interesting, along with adding an interesting dynamic to fights where you want to win over a certain ghoul.

The focus is truly on the ghosts themselves, and their crazy designs and moves. Each yo-kai has unique characteristics, like their personality style, what tribe they hail from, and what their preferred “state” might be. You can change some of those characteristics throughout the game, but honestly, I never bothered; I liked my motley crew of ghosts too much to try and min-max them for optimum output.

Each yo-kai has their own personality and theme, leading to a wildly unique cast.

The charm of the yo-kai is easily worth the asking price, but combat is where things get a little middling. You don’t have full control over your yo-kai’s actions in battle, but rather you act as more of a yo-kai commander. You assign six yo-kai to a wheel, and can have three in play at each time. Spinning the wheel lets you rotate combatants in and out, and you gain advantages for having multiple members of the same tribe in combat together, but the most active role you take besides spinning the wheel is determining your team’s targets, feeding your allies (or foes) and using your team’s Soultimates.

Soultimates are your team’s trump cards, and much of the larger boss fights rely on you managing your soul meters effectively. Once a yo-kai’s soul meter is filled, you can activate a Soultimate – after completing a quick minigame. Sometimes it’s the easy “spin the wheel” or sometimes it’s the difficult “trace this weird looking rune,” but each use of your Soultimate requries a quick distraction on the bottom screen of your 3DS. The trade-off is a super-powered attack, unique to each yo-kai. While my talking cat-boxer unleashed his paws of fury on enemies with his Soultimate, my nightmare chomping anteater inspirited enemies, making it so my hits gained back extra soul.

Ogres patrol the nights, turning the game into a survival horror experience.

It’s a really clever combat system, but I was often frustrated at how hands-off it felt, especially during boss battles. During normal fights I could relax into auto-pilot and not worry too much, but with a boss that has multiple targets I need to track, I was often frustrated I couldn’t specify who my healer was healing, or that I couldn’t change targets while charging a Soultimate.

There’s also a bevy of sidequests and favors to undertake, which will certainly lengthen your time spent with this title. Not all of them are overly complex, but they’re usually involved just enough and have enough charm and witty writing to compel me to keep picking them up.

Yo-Kai Watch is a solid first entry, or I should say, first import. Japan has already seen more of this series, and I imagine with a TV show already airing here in the US, we’ll likely see more. The good news is that that’s a very good thing. Regardless of mechanical nitpicks or repetitive quests, there is an undeniable charm that is tangible in every minute spent with this game. It’s the first “catch ‘em all” game to get close to that feeling I had when starting Red/Blue for the first time. It hasn’t replaced those games quite yet, but if these titles continue to improve, I could make room in my heart for both Pikachu and Jibanyan.

Yo-Kai Watch is an endearing, charming title with some minor missteps, but it overcomes those with the pure joy of discovery and intrigue that can only come from a well-crafted collection-RPG, reminiscent of my youth spent behind a dim GameBoy light.