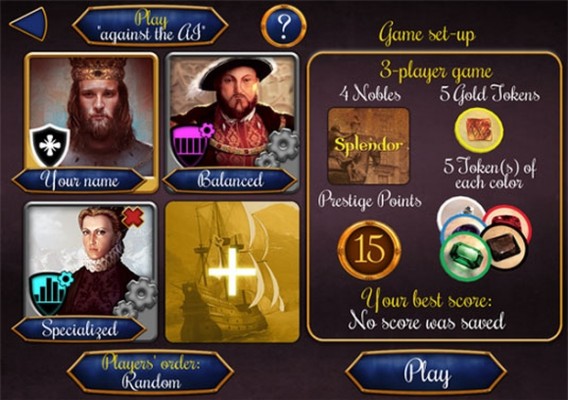 With the advent of tablets and phones with larger sized screens, it’s not surprising that many board games have crossed over to the digital realm. Days of Wonder has been at the forefront with the Ticket to Ride USA and Europe games as well as Small World 2. Now they have released Splendor on mobile devices, no gem poker chips needed.

If you are scratching your head why Days of Wonder might be publishing this app, Asmodee published Splendor under the Space Cowboys name. Asmodee acquired Days of Wonder in 2014. Since both companies are under the same banner, it only makes sense for Days of Wonder to publish the mobile version of Splendor.

Instead of rehashing the rules and reviewing the game of Splendor, I’m going to point you to my review of the original game.  If you don’t like the game Splendor, you probably aren’t going to enjoy the mobile version.

For those who enjoy Splendor, you might wonder how the game plays. When you hit the “Play” button, you can set up the game to play from two to four players either against the AI or other people in a Pass and Play format. As you change the number of players, the number of Nobles and tokens automatically updates. When playing the AI, you can choose from Balanced, Specialized, Opportunistic, Random, and Secret modes. During the game, if you choose the Random AI, the shield for the character displays the kind of AI being used, while the Secret AI randomly chooses an AI but doesn’t reveal it to you during the game. It would have been nice to be able to add AI players to the Pass and Play games, and I’m a little surprised this feature is not included. The different AI options do play much differently from each other, and these kinds of personalities are similar to those I’ve experienced playing with real people. These AI players change their strategy based on the decisions of the player instead of using a typical difficulty level.

The setup of Splendor is faithfully recreated on the game screen. The three rows of four cards and the chips are easily accessible with a swipe of the finger. Purchasing cards or acquiring gem tokens felt natural. The bottom of the screen shows what chips you have and what color cards are in your tableau, making it easy for you to figure out what your current inventory is. Cards that can be purchased are highlighted as well, making it possible for you to see a card to purchase that you might not have originally noticed. The Renaissance theme is faithfully recreated with the player profile pictures and the music playing in the background.

One glaring omission from Splendor is any kind of online support. You can put in your Days of Wonder account information to connect to the cloud if you wish, but it really doesn’t do much other than connect you to the Splendor online community. No kind of online multiplayer is currently available either. Ticket to Ride is integrated with GameCenter for multiplayer gaming, and it’s surprising that such an accessible game with quick turns can’t be played with others online.

If all you were able to do was play the normal game of Splendor, that would make this a competent adaptation. However, Splendor does include badges, similar to achievements or trophies, to try to get you to improve your play. Challenges are solo puzzles that you play that change the rules a bit. You might have to gain all of the Nobles instead of worry about points, or you may have two development cards in play for each row instead of four. One of the more interesting challenges was to get a certain number of points in a specific amount of time which make you think on your feet. These challenges can really improve your game if you play them correctly. You are given a point score at the end, but no explanation is given to how the scores are given or what might be considered a good score.

Splendor includes several options for the presentation of the game, such as making the AI play faster or making the text larger for smaller screens. One of the options included is colorblind help. I actually played a game of Splendor with a friend who is red/green colorblind, and I tried to help him out by pointing out which was green and which was red. I’m impressed that this is included and I wish that there was a way for the actual game to implement some kind of colorblind assistance.

The Splendor app is a great way for fans of the original game to play it on the go. The multiple AI settings and challenge puzzles give the Splendor app a unique feel. I would have liked to see more integration online within a game. With a price of $6.99, that makes it a fairly expensive app, although much less expensive than the physical version. The lack of online multiplayer and the inability to add AI players to a Pass and Play game make Splendor a good app and not a great one. If you are at least curious about Splendor, it's not a bad investment.

While not working as a Database Administrator, Keith Schleicher has been associated with Gaming Trend since 2003. While his love of video games started with the Telestar Alpha (a pong console with four different games), he trule started playing video games when he received the ill-fated TI-99/4A. While the Speech Synthesizer seemed to be the height of gaming, eventually a 286 AT computer running at 8/12 Hz and a CGA monitor would be his outlet for a while. Eventually he’d graduate to 386, 486, Pentium, and Athlon systems, building some of those systems while doing some hardware reviews and attending Comdex. With the release of the Dreamcast that started his conversion to the console world. Since then he has acquired an NES, SNES, PS2, PS3, PSP, GBA-SP, DS, Xbox, Xbox 360, Xbox One S, Gamecube, Wii, Switch, and Oculus Quest 2. While not playing video games he enjoys bowling, reading, playing board games, listening to music, and watching movies and TV. He originally hails from Wisconsin but is now living in Michigan with his wife and sons.
Related Articles: Splendor, Tabletop
Share
Tweet
Share
Submit