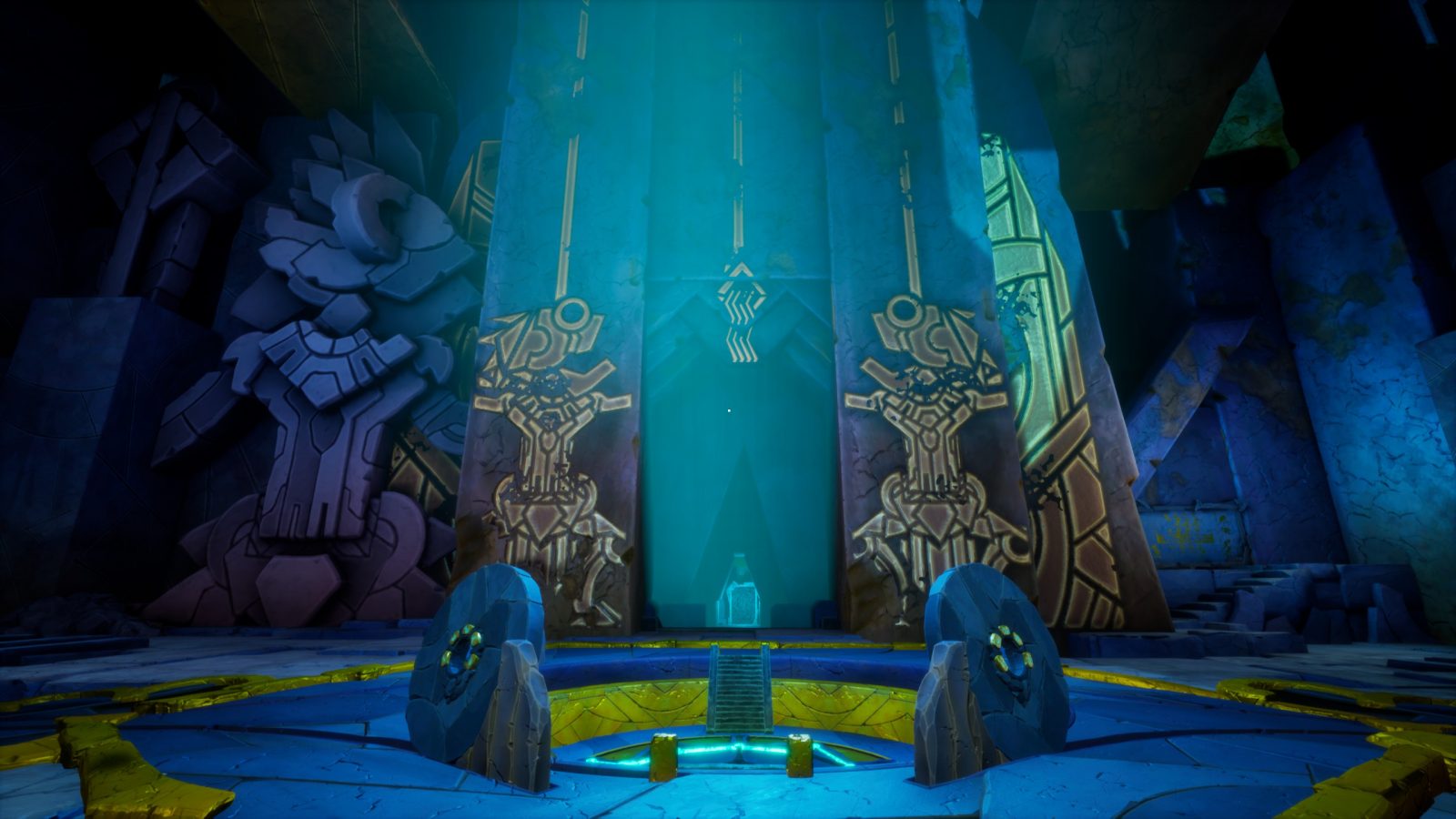 There’s something about the Lovecraftian genre that’s mysterious but intriguing, scary yet engrossing. Maybe it’s the man vs cosmos trope? Or maybe it’s the scariness of the unknown and unseen? If done well, I’ll be hooked in immediately and fully immersed within this fictional world. There’s been a lot of Lovecraftian-themed games, and we’ve seen our fair share of the good and the bad. So when Call of the Sea popped up, I was intrigued to see what newly established developer Out of the Blue Games’ interpretation of the genre. Will it be a generic twist on the genre? Or is it something more?

Call of the Sea follows the story of Norah Everheart, a woman in search of her husband, Harry. Harry led an expedition to a nameless island paradise that houses remnants of a long-lost tribe, in hopes of finding a cure to Norah’s mysterious illness that has left her weak and tired, along with strange black spots up her arms. However, upon touching down and navigating through the long-forgotten island, Norah quickly learns the fate of her husband’s expedition, as well as the truth of her ailment. 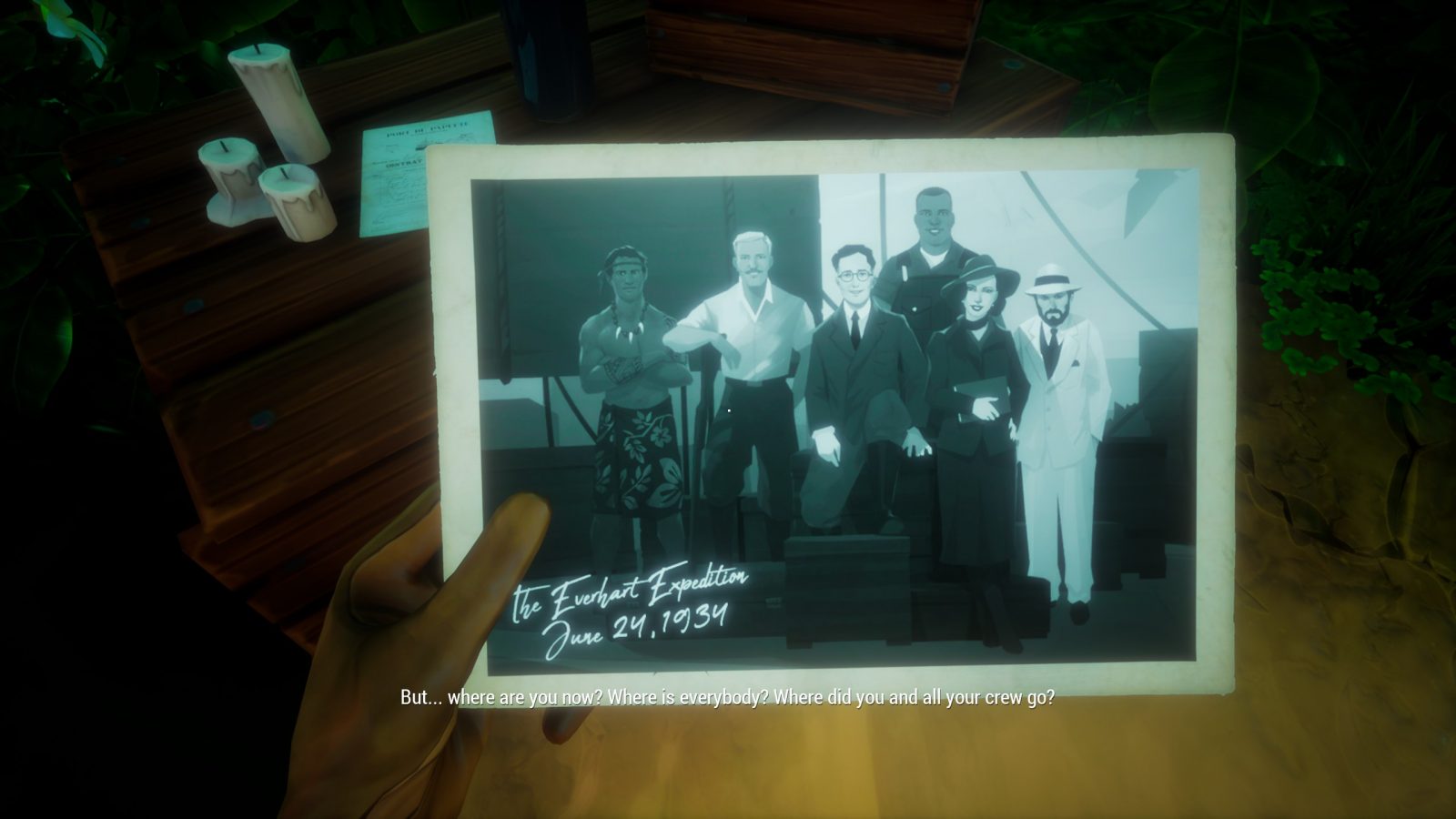 Of course, this review will be riddled with spoilers, so tread carefully.

The story is amazing to experience and is told to you in bite-sized chunks, so you remain engrossed and driven to learn what the hell happened to the expedition. Hell, just learning about the story is a puzzle in itself, and it’s up to you to find the notes and audio logs that tell said story. Upon finding the first camp, it becomes clear that Harry’s crew may have discovered a forgotten tribe, as you find notes surrounding a strange black ooze. However, Norah quickly finds out how doomed this expedition was, as she discovers more and more mysterious accidents that either turned the crew against each other or lead to their deaths.

As it turns out, this strange black ooze has mysterious properties, and it’s the cause of all the issues that the crew has suffered. It causes them to develop the strange black spots that Norah has up her arms, and has turned them against each other. Soon, she’s struck with the next question: why is the mysterious black ooze so important to them? 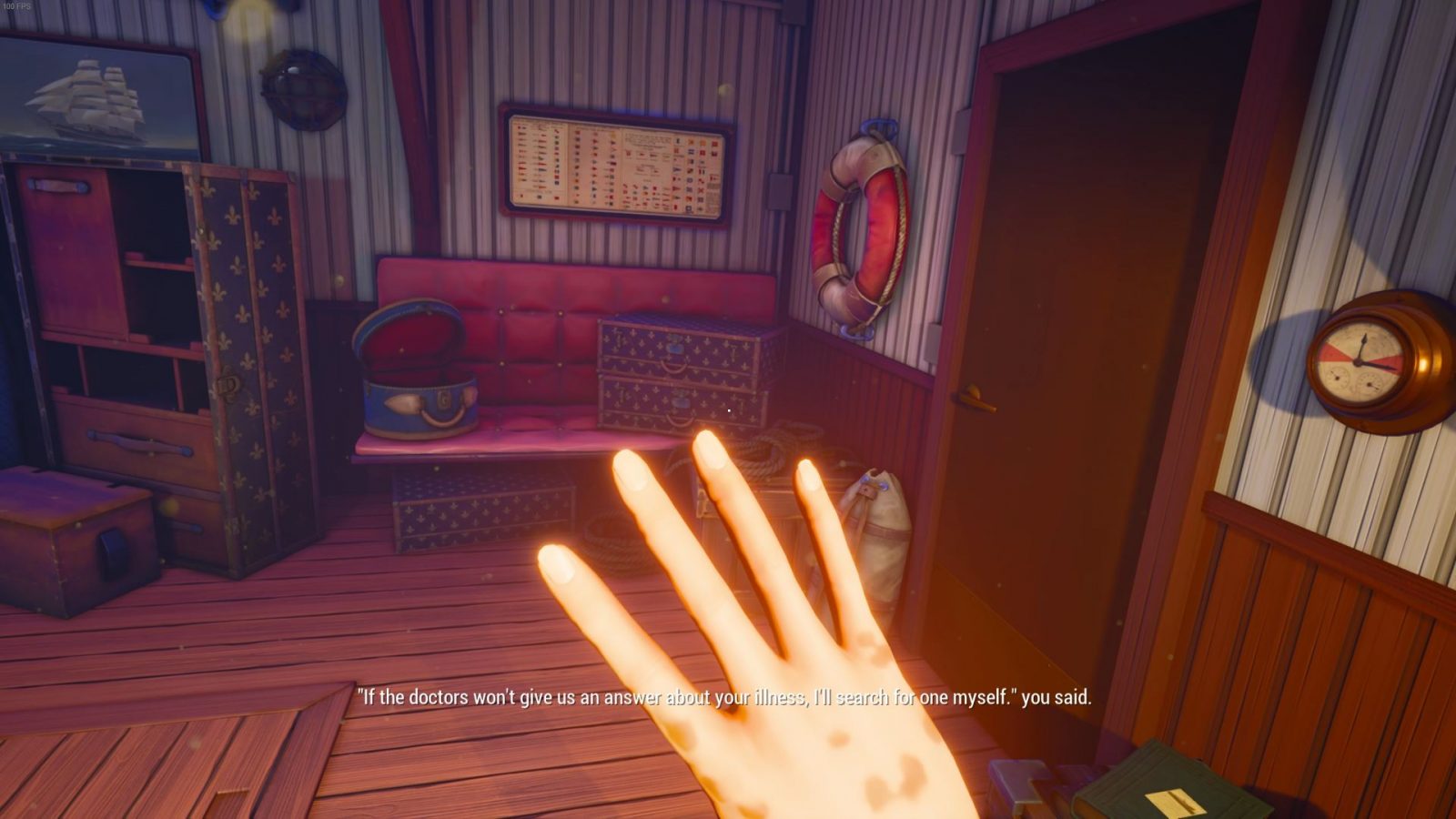 Then she learns the true reason why she’s on the island and the truth of her illness. This island was once the home of a forgotten occult civilization that worshipped elder gods with outer-worldly power, and there was a striking difference between those that were and weren’t descendants of the elder gods (with the latter as slaves and cattle). Norah discovers her illness is a consequence of being one of these descendants. The real reason for her journey to this island is an elaborate plan by Harry for Norah to learn the truth about herself and come to terms with it. Yet, Norah takes it one step further and leaves herself with two possibilities: does she leave her husband, evolve into her power, and live an eternity without him? Or stay with him, but continue battling this illness, all to eventually die a slow and painful death? It’s a love story with a difficult end choice.

See, the thing I love most about Call of the Sea is that it’s not a horror game, yet it’s fully inspired by the Lovecraftian horror genre. Screen Rant sums this game up well:

While Lovecraft painted this otherworldly phenomena as a horrifying reason to despair and go insane, Call Of The Sea portrays Norah’s quest to find her missing husband in the South Pacific as a positive experience, one where fear of the other can be conquered through understanding and a willingness to accept the truth.

I couldn’t write something better myself; Call of the Sea is a fantastic twist on Lovecraftian games of the past — standing on its own two feet and is fully accessible by everyone because it’s not a horror game. The reason why Call of the Sea is so fun is that it allows the player to dip their feet into the Lovecraftian genre without getting submerged by the intensity and stress of cosmic horror. 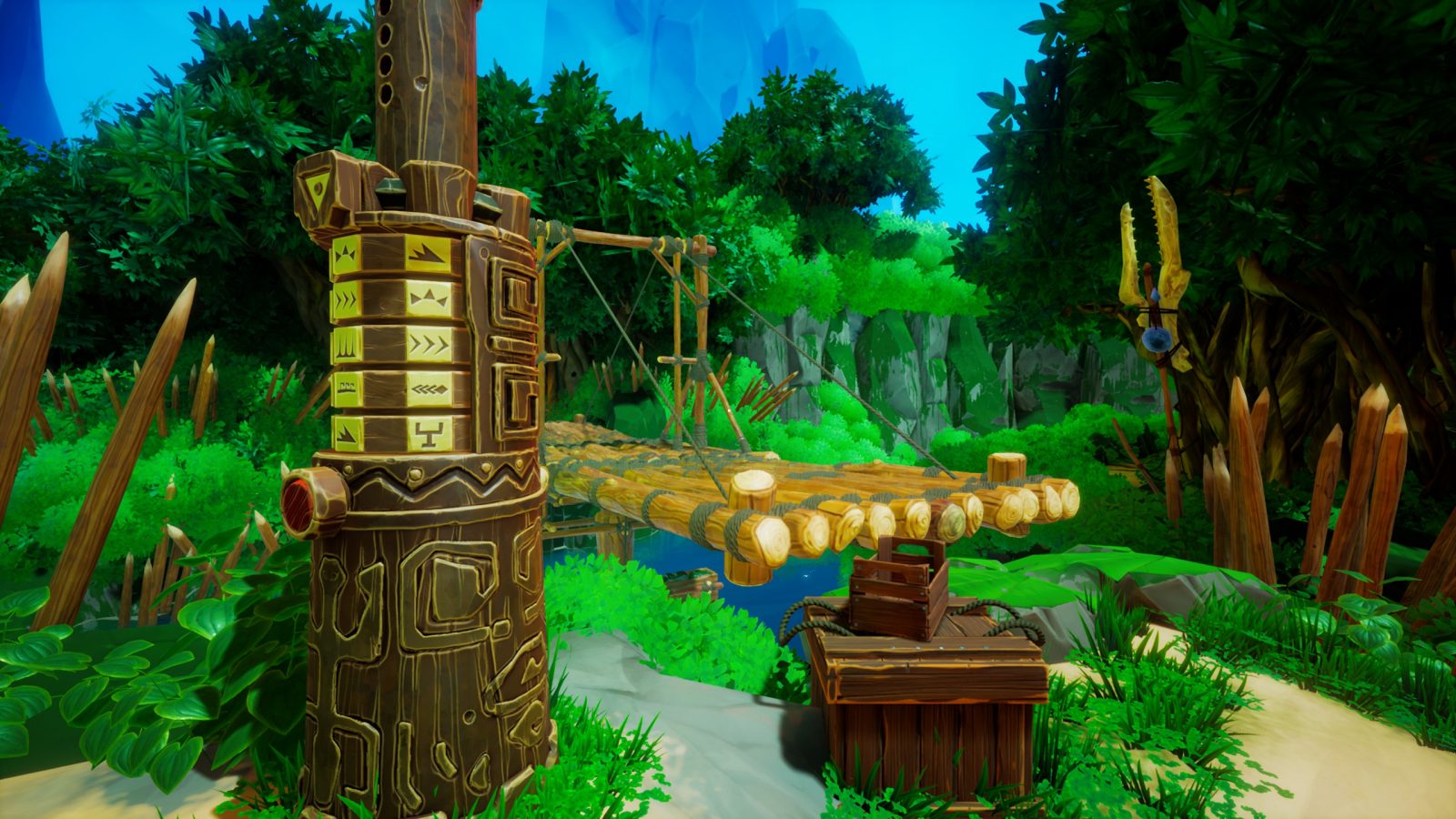 The next part that Call of the Sea passes with flying colors is the puzzle design. Almost all these puzzles are hard head-scratching, yet immensely rewarding upon completion. They range from scavenger hunts to complex combination puzzles. One of the best things this game has to offer is that effectively all the puzzles in some way operate in conjunction with each other. Puzzle games of the past may have you complete puzzles to simply unlock doors or navigate over obstacles, but in Call of the Sea majority of the time they provide you with small clues to a much larger end puzzle. One puzzle that is a prime example of this is when you discover that the strange black ooze has floating properties once a specific frequency is played to it. Once you see this ability demonstrated in a smaller environment and have gathered clues on how to operate it on a much larger scale, the ultimate puzzle is one that has you operate a huge organ carved into a mountain. Each step you make to get closer and closer to the solution is difficult, but the payoff is oh so worth it. To stand atop a huge stone structure and play the correct frequency through this organ, and to see the mountain shift and rumble to life is one of the coolest things I’ve ever seen in a video game.

Call of the Sea is an amazing, albeit short, adventure puzzle game. It’s a fully engrossing experience that’s tense, but not scary, and is the perfect game to show to people if they’re interested in the Lovecraftian genre but aren’t fans of horror. It showcases fantastic puzzles and the best parts of the Lovecraftian horror genre, twisting it into a fascinating love story, and presenting it in a fully optimized and glitchless package. Out of the Blue Games couldn’t design a better game to debut to.

Call of the Sea

Call of the Sea might be short, but it’s a highly rewarding puzzle game with a fascinating narrative that keeps getting better and better as the game slowly reveals the truth to you. It’s a fully engrossing experience that showcases the best parts of the Lovecraftian genre, but makes it fully accessible to players who want to experience the mystery but none of the horror.

With a deep interest in writing, Ben followed that into a Journalism degree. As an avid lover for gaming, he is constantly expanding his library with console, PC, and VR games. He's obsessed with stealth games and loves hunting down the smallest of details inserted by devs.
Related Articles: Call of the Sea
Share
Tweet
Share
Submit