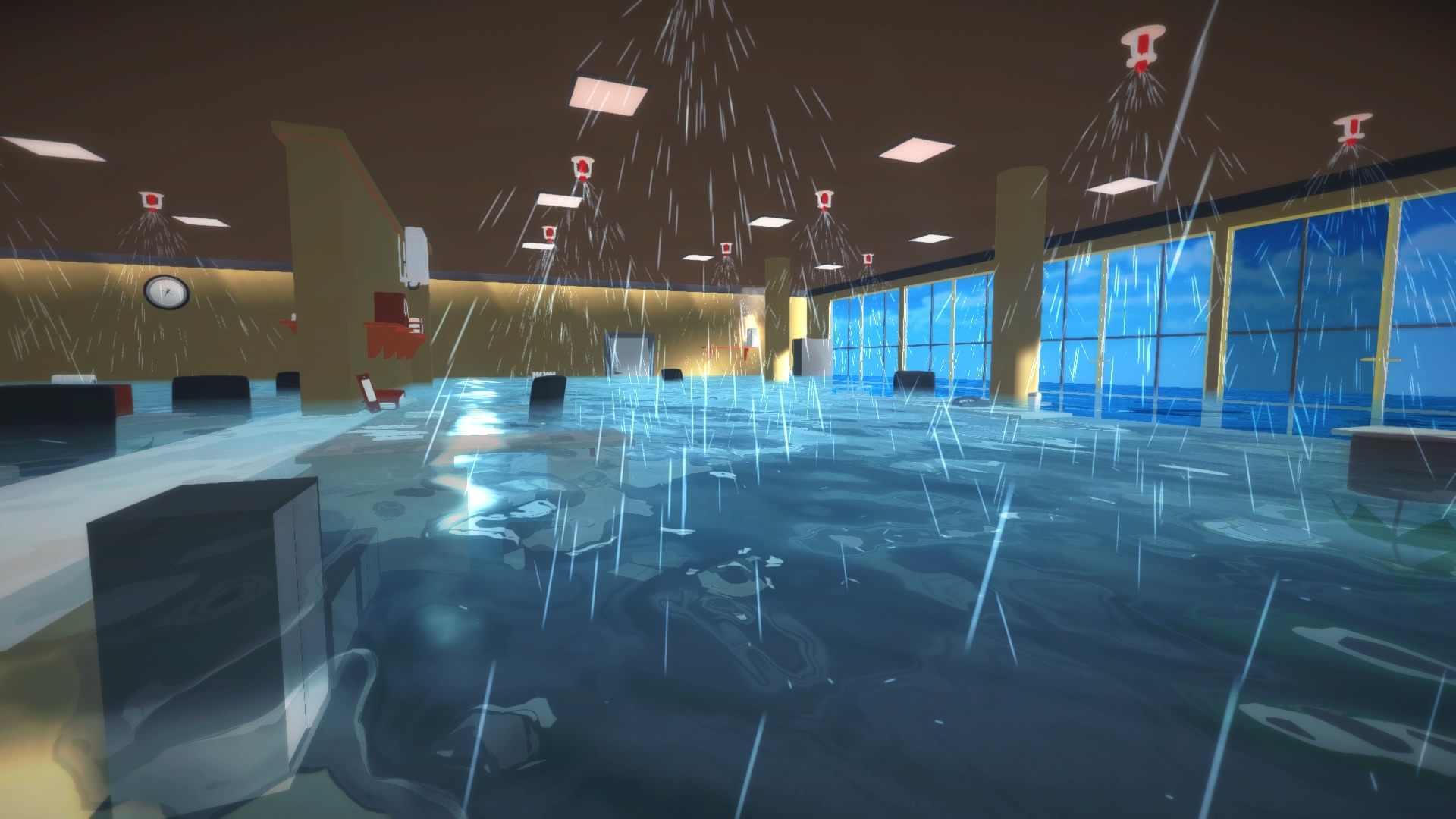 They say that if you die in your dreams then you die in real life. Let’s hope that isn’t true as you attempt to meet your maker over and over again in Suicide Guy.

The title on its own sounds dark and may even turn some people away, but taking a few minutes to look closer reveals that it’s more light-hearted than it originally seems. The story begins as you’re revealed to be just an average guy sitting around drinking beer and watching TV. It isn’t long before he falls asleep and you get whisked away to the dream world. Once in the dream world, you realize that the beer you were drinking in the real world before falling asleep is slipping out of your hand and you need to wake up to prevent that. What’s the best way to wake yourself up, you ask? You always seem to wake up just before dying in a dream, so why wouldn’t that be the case now? That’s right, it’s time to kill yourself in order to save your beer.

Before every level, you will be in the hub world, which takes the form of a diner. It’s a random, yet creative starting area to say the least. There are a total of 24 levels to go through, and each one gets its own table in the diner. A level’s table has a card with its number, an object to represent the theme, and the collectable statue if you’ve found it. Tables will be empty until you’ve unlocked their corresponding level and a spotlight shines on the next one you need to complete. The setup of the diner allows you to replay levels any time you want and as much as you want. Some extra fun additions are hot dogs and hamburgers that you can eat, a food recipe on the whiteboard which randomly changes, TVs that show your beer about to fall, and the clock that keeps track of game completion. These things have no other use besides world building, and it fleshed out the hub world pretty well.

The fact that the game takes place in dreams allows for ridiculous situations aplenty. The developers took this to heart and made a nice variety of interesting levels and clever ways to beat them. The absurd and complex methods of kicking the bucket do wonders in taking away any seriousness or dark undertones. For example, one level involves waking up a dragon so that it will eat you. Another level starts you in a barn with a cow, a seesaw, and a fridge hanging from the ceiling. Some situations make it obvious of how they should be completed, but in most cases, you’ll need to pay attention and think carefully. This need to plan and think outside of the box is one of my favorite aspects of the game, alongside the level designs.

Speaking of level designs. there are a decent amount of references and parody levels. Some are more subtle, like when going through a tomb, you’ll find a skull with a sable fedora on it, or when in a lighthouse, there’s a whale in the distance and a Moby Duck book on the table. No, that wasn’t a typo, that was its actual title. Other levels are more blatant, like the inclusion of a weird looking Mario area, or a small room that gives you a Portal gun. They change the environments, colors, and designs enough to avoid copyright infringement, but make sure you can tell what they are supposed to be. For example, the Portal gun has yellow and purple portals instead of the trademark blue and orange. Even with these homages, there is a good mixture of original and referential content.

I mentioned statues earlier, which are the only collectables in this game. There is one statue per level except for the last one. That being said, there is a “level 0” otherwise known as the introductory level, which has a statue that you may overlook when first starting. Thankfully, the level select screen lets you go here to snag it real quick. Unlike the other levels, this one can’t be accessed from the diner, but that isn’t much of a concern. The statues will either be sitting out in the open in some cases, or you’ll need to find them on some side path. Even if they are off to the side, the statues are never really hard to find. It’s a nice addition because the statues are fun to look at in the diner and don’t take much work to collect. There are even trophies for collecting 1, 5, 10, 20 and all 24 statues. My personal favorite is one where your character is just laying down being lazy.

As for gameplay, the controls are pretty simple, even if they are a little loose. Sometimes you will slide a bit too far and fall off a platform or slightly bounce off a wall when jumping too close to it. Grabbing and moving objects works well enough, but when you need to stack objects and move them in some cases, sometimes it feels like they were buttered up. It isn’t frustrating by any means, but it’s something you need to keep in mind. Besides grabbing and jumping, your other actions involve punching, zooming in, and burping. The punching comes in handy, while zooming in never feels necessary, and burping is just to remind you that your character is a slob. So let loose, jump into the dream world, and work towards saving that beer.

In the end, Suicide Guy is a surprisingly goofy romp through the dreams of a typical slob. The story isn't the deepest, but it gets points for subverting expectations and not being a cliche. The variety of level designs and clever methods of completion are refreshing. It provides a fun little challenge without becoming a chore.

Codi loves to play video games and watch movies. He will watch almost any kind of movie just to experience them. His ideas take inspiration from the shows and movies he watches, and games he plays. He also loves a good pun.
Related Articles: Suicide Guy
Share
Tweet
Share
Submit