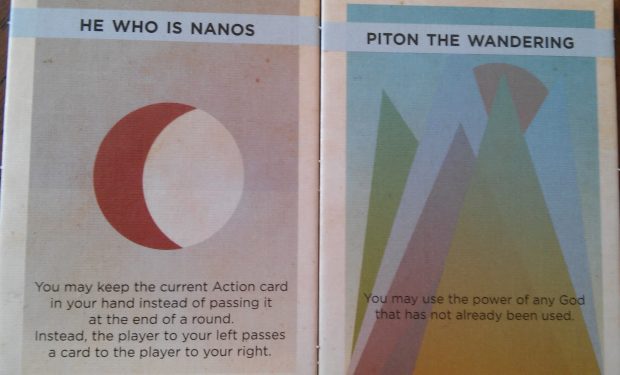 A tale is spun of ancient gods, not for the last time, but for the first. They weave themselves into the people’s memories that they might be worshipped and adored. This is the time when their faithful must make a stand, not on the battleground with steel and blood, but with quick wits and sharp tongues. The victors will be glorified for eons and rest cursed to infamy. This is the tale of They Who Were 8.

They Who Were 8 is a small game packing a lot of soul. This small card game sets you, the player, as one of the faithful of two gods who you must glorify throughout the course of the game. Throughout your experience, you will gather glory to your gods and slander others with infamy, seeking to make your deity the patron of a new faith.

The concept of something ancient and incomprehensible hits you as soon as you take your first peek into They Who Were 8’s box. The gods are depicted only by name, title, and symbol. Antoc the Unseeing’s card bears two eyes gleaming out of the darkness. Evertwisted Aristaphane bears a layer of chains that seem to protect more than they restrict. Todd Sanders, the designer as well as artist behind this project, opted for a minimalism that comes through in both the mechanics and art, but it sets the tone for something profound.

The game itself is simple, but not without strategy. Each player begins with two randomly chosen gods out of the pool of eight and three action cards out of a total of sixteen. What happens then depends on whether you are engaging in Titanomachy, which is playing battle royale style, or Pantheon and making a team with another player.

In Titanomachy, you proceed by make pairs with the players next to you, sharing your left god with the right of the player to your left, and your right god with the player to your right. The ultimate goal is not to have the most points, but to have the least points in the pair of gods that has the highest total, to seem the more selfless god at the end of the story, but also one of the most important. This measure is a major boon to the strategy, as you find yourself carefully measuring where you will place your resources on both of your pairs. It’s also what makes me prefer this version to Pantheon. There are interesting ways to work with another player when you are on a team, but the pair elements are no longer present, making these decisions easier to make overall.

Each god has a unique power which can only be used once per game, at the cost of a victory point. These powers are crucially important to victory, however, so you have to careful when using them. Lost Praxis’ ability, for instance makes it immune to actions cards for the rest of the game, whether they are harmful or beneficial. Nonetheless, some of these abilities are more powerful than others, which can make for some inconsistencies. One of the powers allows you to draw and then discard two cards, while another lets you switch all tokens with another god.

The action cards are also simple, and fewer of them are as interesting. Most consist of generating glory or infamy tokens, which respectively grant positive and negative points. From there are cards which move these tokens from some gods to others and cards that eliminate tokens. The only complicated aspect of play is in determining when to use these cards and when to give them to other players. Each round sees you playing one of your three cards, passing one to the player to your left, and drawing back up to three. None of the cards are bad, so you have to be careful when deciding which card to pass along. Do you pass something beneficial in the hopes the other player will use on your pair or harmful in the hopes that he or she won’t? In three or four player games you will cycle through the same cards numerous times before the game’s end.

The game is over once either the pool of glory or infamy tokens is emptied. At 15 tokens of each type, the endings come quickly and usually without much distance between the winners and losers. It also gives you control over when the game ends, as you strategically drain both pools down to their last.

I found They Who Were 8 to shine the most with three or four players. There are not so many elements to balance that you find yourself at a loss for how to proceed, yet there are enough moving pieces that you feel on your toes. With two people there is certainly a battle of wits about when you will play your cards and which pair you will focus on, but you find the decisions  to be more linear in nature.

The cardboard god cards are thick and weighty, and should be able to stand up to punishment. Glory and infamy tokens are glass beads colored light yellow or grey, which fit into the game’s muted tones but also make them difficult to distinguish unless they are under direct lighting. The cards are less sturdy, and will take special care to maintain. They are too large for any sleeve size I am aware of and prone to bending without much provocation. While going through the sixteen cards for the first time, they started bending in ways I could only fix by putting under a book for a while. I could imagine that regular play will not see them lasting very long.

The beads are fine as long as they are well lit, but otherwise their similar shape and size could be a problem

Which, I suppose, makes it fortunate that They Who Were 8 will probably not come to the table very often. With eight gods and sixteen cards you find that your options in game are fairly limited. There are certainly strategies to unfold, and some I definitely didn’t discover until I had played through the game a few times, but they come down to a few key skills of resource management. They Who Were 8 is a minimalist game, and it shouldn’t be faulted for achieving exactly what it sets out for. At the same time, there is little here to be really attracted to. It’s quick, and for the few minutes you play gives you a worthy puzzle, but those minutes come and go with little to make them remarkable.

They Who Were 8 has little in the way of strategy, art, or theme, but everything it does have is deliberate and effective. It’s mechanisms work well to create a battle of wits over the cards and resources, short-lived though that battle is.

John Farrell is a legal aid attorney specializing in domestic violence, living in West Chester Pennsylvania. You can listen to him travel the weird west as Carrie A. Nation in the Joker's Wild podcast at: https://jokerswildpodcast.weebly.com/
Related Articles: Tabletop, They Who Were 8
Share
Tweet
Share
Submit