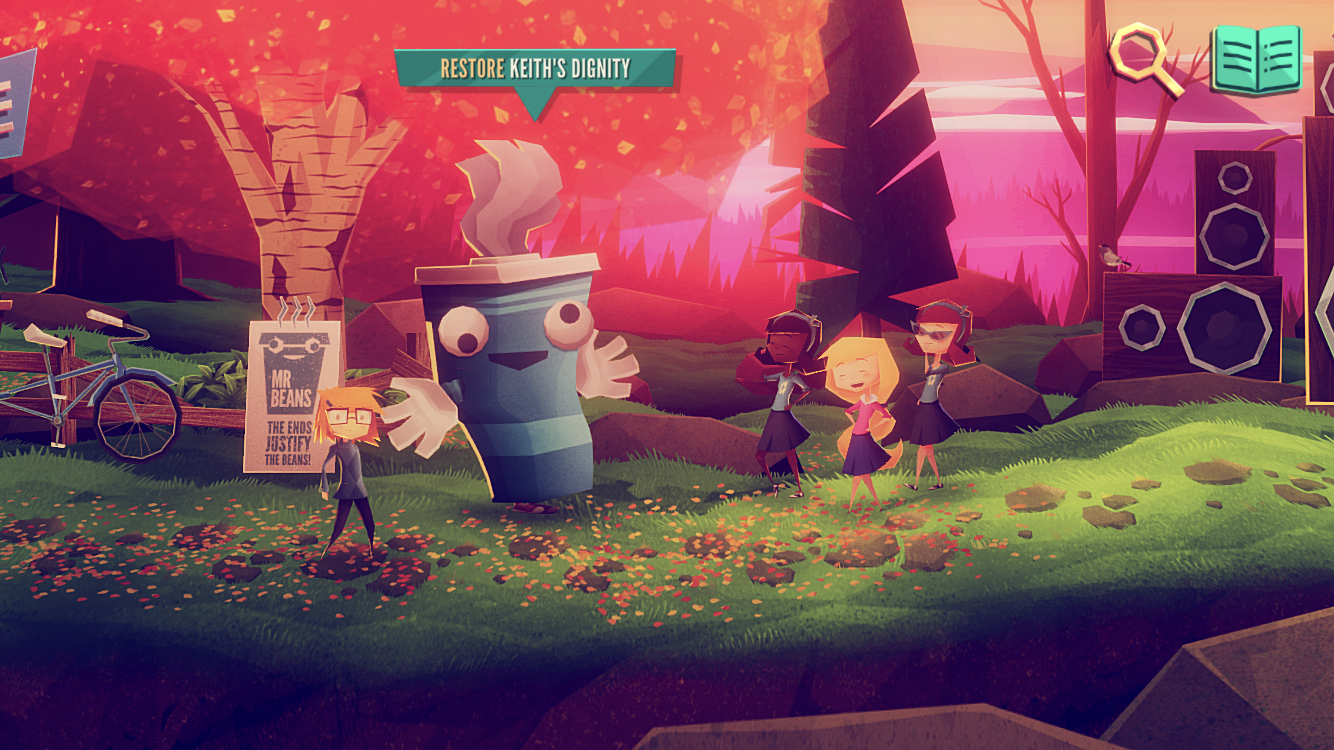 Arthur K. Finklestein’s Jenny LeClue series of small-town mystery novels has grown stale. Its heroine solves mysteries like “The Case of the Missing Car Keys” in the town of Arthurton, where everyone is happy and nothing ever changes. Having reached almost 40 books in the series, readership is on the decline and Finklestein’s publisher demands change: someone in Arthurton has to die, or the series is canceled. This is Jenny LeClue – Detectivu for iOS, Finklestein’s last chance, and Jenny’s first big case.

The first murder Jenny must solve is her own. Helping out her mom at the local university, she’s serving as the dead body for forensic students to examine and determine the cause of death. The students determine Jenny’s “death” was an accident, and, frustrated by their incompetence, she proceeds to point out everything in the crime scene they missed. Needless to say, the game has a great sense of humor. The jokes come a mile a minute and they don’t stop until the credits role. The developers at Mografi strike a careful balance between comedy and drama, and it’s surprising how well it works. For example, Jenny and the author serve as each other’s comedic foils: Finklestein comments about how whatever the young detective is about to do is stupid and dangerous, while Jenny will reply to his narration and explain why it’s actually a great idea. During more somber moments the author will also write how Jenny is feeling or thinking, since she’s too stubborn to tell anyone, let alone the audience. 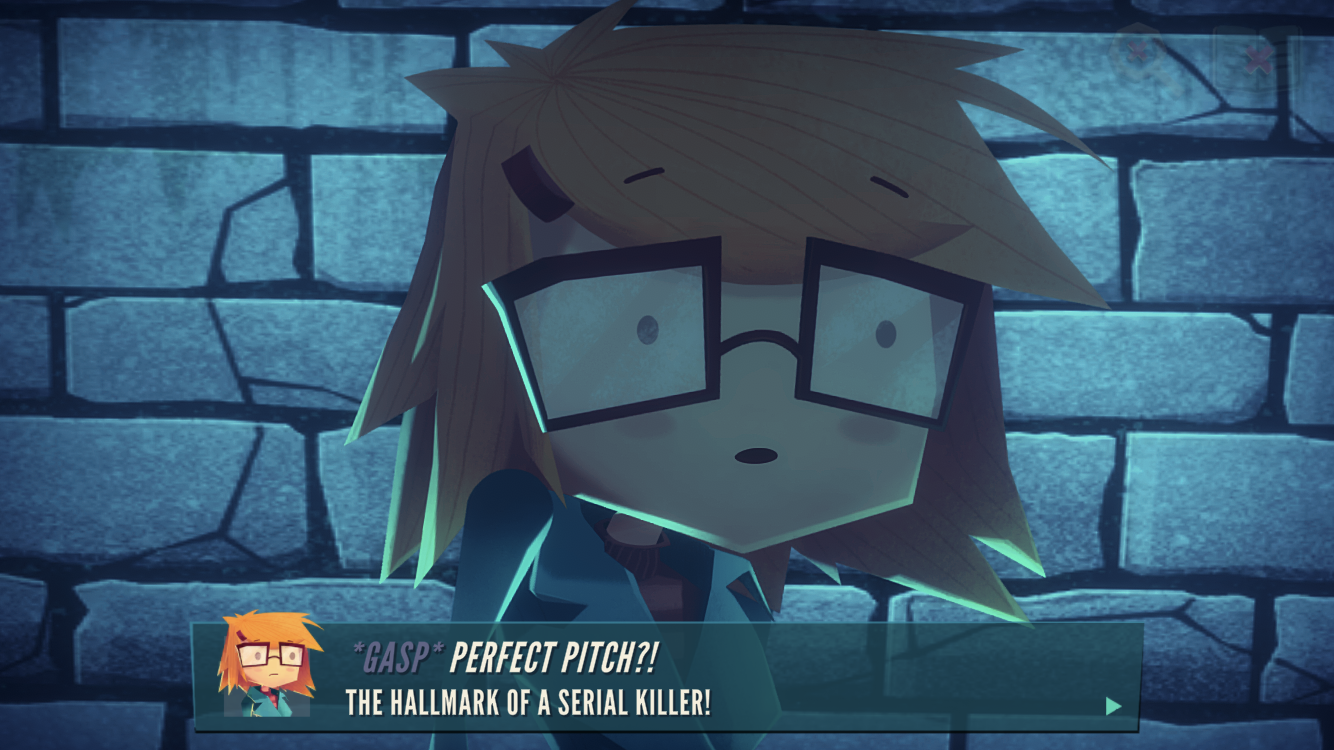 The mystery at the game’s center continually grows deeper and deeper as you progress, and it can get surprisingly dark despite the game’s cute, paper doll aesthetic. The best mystery novels I’ve read allow the reader to solve the mystery along with the main character, and that’s exactly what the game does with each case you solve. You discover clues by either examining the environment or interrogating a suspect and, once you have all the information, the game trusts the player to figure out what happened and put all the clues together. While this process is disappointingly linear, (you can only explore each area of Artherton as the story demands with no backtracking), it does cut down on some of the aimless wandering of other adventure games. However, this disappointment is further compounded by all the collectables you can find in the world. You can discover stickers to customize your notebook and some ripped up postcards to put together, but if you miss one, there’s no going back unless you start the game over. I enjoyed the game enough that I want to find everything, but I don’t want to have to play the entire adventure again just to find a few stickers. Since these things don’t carry over when you start a new game, you have to get all of them in one go.The collectables are only cosmetic purposes, but at the very least, a scene select option or new game + would have been nice to have.

Speaking of stickers, they appear to be the culprit in the “Case of the Frequent Softlocks.” After obtaining a new sticker, you’d obviously want to put it somewhere in your notebook. Doing so will sometimes cause all of the menus to break as the sticker menu refuses to close. The camera can cause a few softlocks as well, when it zooms in on something it rarely will forget to zoom back out or sometimes after a cutscene your controls will just stop working. The game saves frequently enough (there is strangely no manual save option) so you’ll only be replaying a minute or two at most, but these occurrences happen often enough to be a big annoyance. 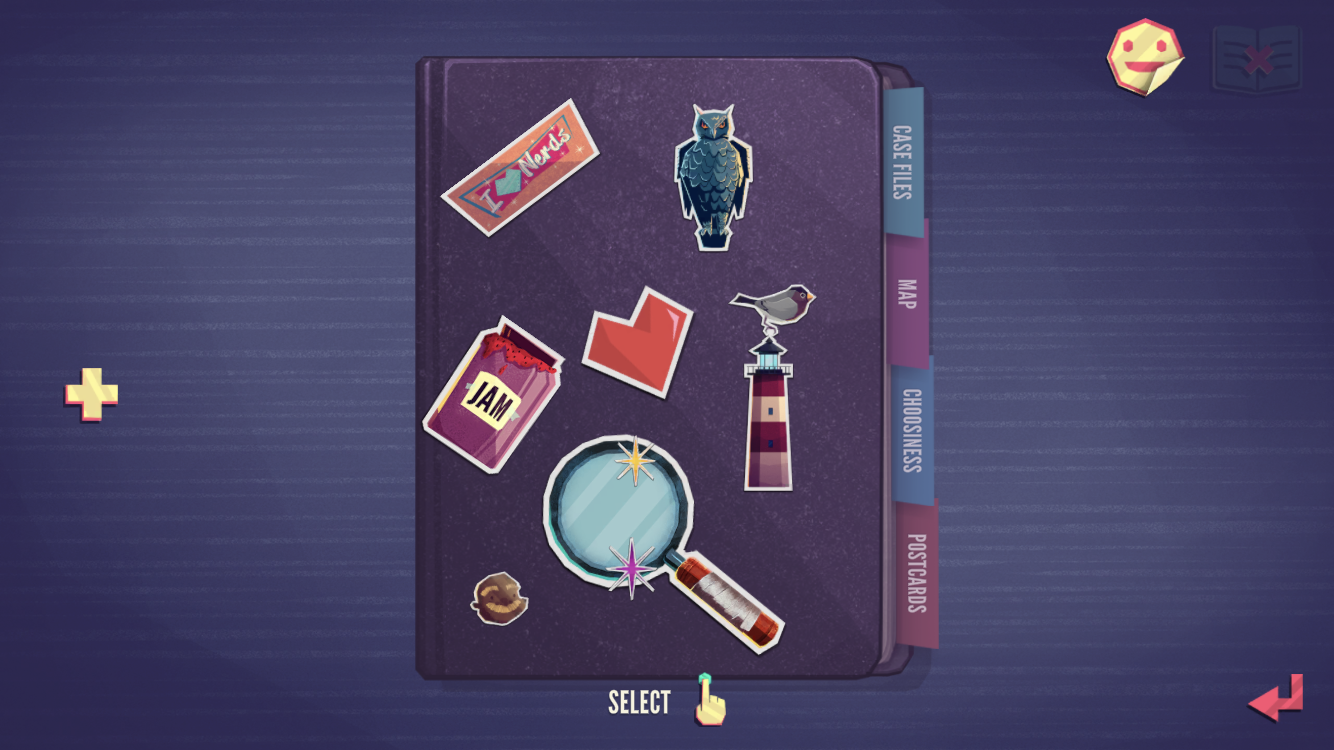 I played the game on an iPhone 8 running the newly released iOS 13. Other than the softlocks, I didn’t encounter any performance issues. Jenny LeClue can be quite a battery hog however, which makes sense because of the game’s gorgeous lighting. There is a battery saver option, but it makes the visuals, especially the text for some reason, very blurry. The touch controls can be a bit finicky and imprecise at times when exploring, grabbing and moving things is tough when Jenny keeps climbing on them, so while I wouldn’t play this while out and about, it is nice to be able to continue the adventure wherever and whenever you want – as long as you have a charger handy.

As Jenny, and occasionally the author, you’ll make decisions that can slightly change the course of the story, like determining how you get some information out of a suspect or if you accept someone’s help or not. Every choice is recorded in your journal in the adorably title section choosiness. Based on three meters, the game will determine what kind of detective you are and give you a title and cute illustration based on that. You can be a realist or a dreamer, logical or emotional, and a planner vs an innovator. By the end of my playthrough, I was a protector leaning towards, realism, emotions, and planning. It’s a nice touch that helps you feel like your choices mean more than they actually do most of the time, it’s a very linear story and the game knows that, but it’s great to observe the results of your choices instead of having them disappear into the ether once they’re no longer relevant. And, while the game does end on a cliffhanger, you make some pretty big decisions here that could have drastic effects on the story’s continuation. 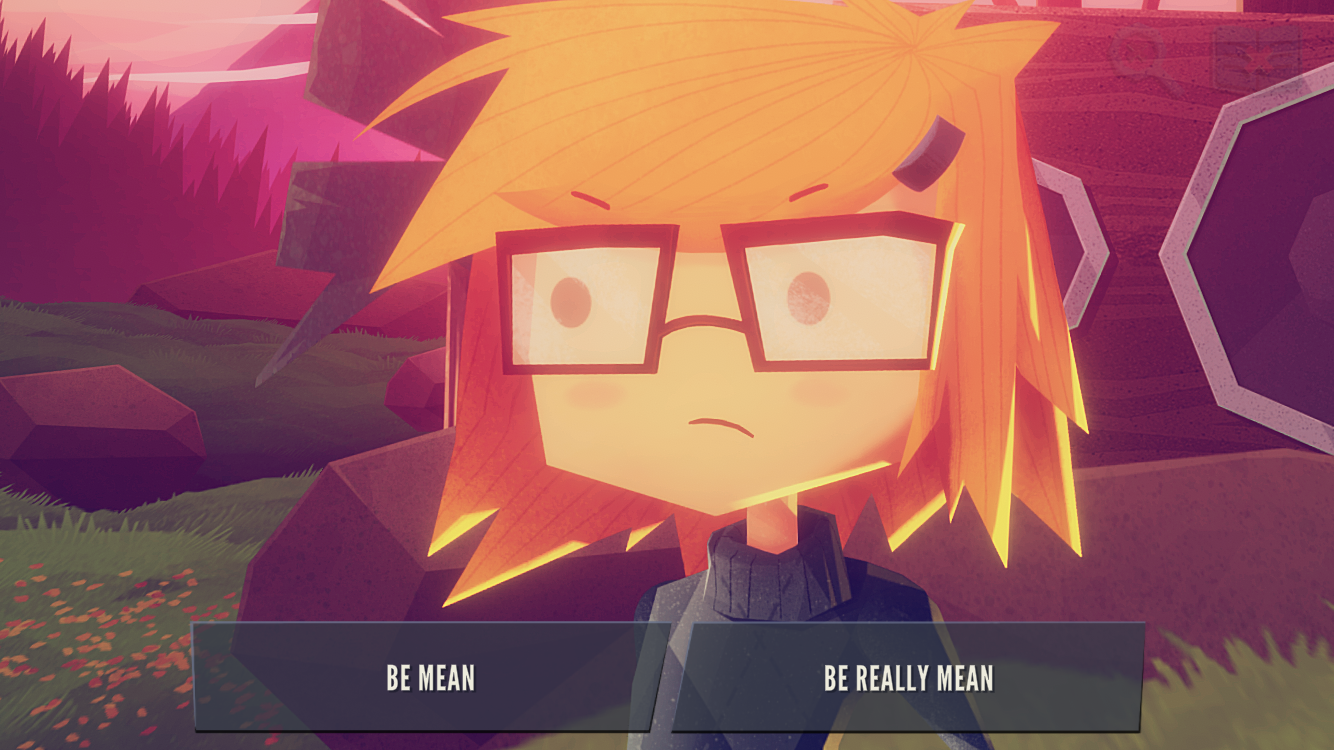 Jenny LeClue sits halfway between an adventure game and a visual novel. You’ll explore mostly linear environments while occasionally finding some secrets and solving environmental puzzles. The game offers just enough choice to encourage a replay or two, but not enough that I think the story or gameplay would change too drastically. If you go in expecting a point and click adventure game like old Sierra or LucasArts titles, you may be disappointed, but if you just want a fun mystery to solve LeClue presents one of the best.

Despite some annoyances, Jenny LeClue is among the best adventure games I’ve played in recent memory. From start to finish, the story and characters are absolutely enthralling and I couldn’t put it down. Every twist and turn had me glued to the screen as I solved a murder alongside Jenny and the author. It’s cute, funny, heartwarming, mysterious, and just a little bit frightening. Jenny LeClue - Detectivu is a must play.

David is the kind of person to wear his heart on his sleeve. He can find positives in anything, like this is a person who loved Star Fox Zero to death. You’ll see him playing all kinds of games: AAAs, Indies, game jam games, games of all genres, and writing about them! Here. On this website. When not writing or playing games, you can find David making music, games, or enjoying a good book. David’s favorite games include NieR: Automata, Mother 3, and Gravity Rush.
Related Articles: Jenny LeClue: Detectivú
Share
Tweet
Share
Submit