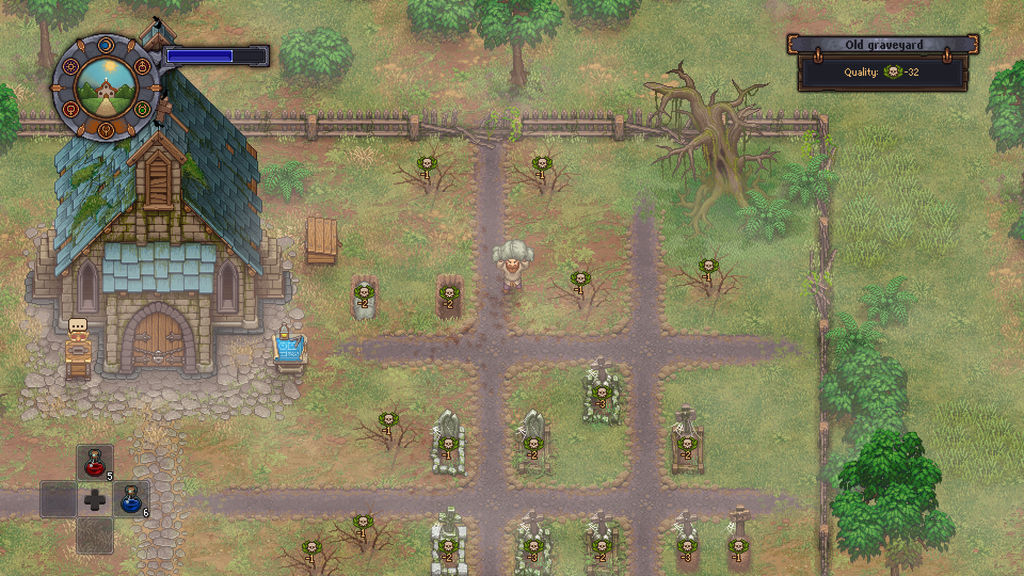 While there are plenty of management sims that let you chill out while running a farm or a shop, Graveyard Keeper offers a new, considerably darker, take on the genre. In Graveyard Keeper, you’re tasked with — you guessed it — tending to the bodies of the recently deceased. Despite its grim premise, Graveyard Keeper keeps its tone fun and lighthearted without shying away from its morbid nature.

The game begins with its protagonist being spirited away from modern times to a medieval village, unsure of whether he’s hallucinating, dead, or really there. Your main goal from there is to find a way home, though you’re immediately waylaid by a talking skull named Gerry who tells you that you’re obligated to serve as the town’s undertaker while you’re there. It’s not much to go on, but who are you to question orders from a mystically animated skull?

Within its first few minutes, Graveyard Keeper gives you a glimpse of just how massive it is. You’re shown the basics of performing autopsies, burying bodies, maintaining your cemetery, and trading with villagers before you can even get your bearings. Before long, you’ll also be growing crops, harvesting wood and stone, practicing alchemy, delivering sermons, fighting monsters, making wine, and running errands for villagers, just to name a few of the game’s activities. It’s pretty daunting at first, as you’re presented with a deluge of tutorial screens explaining the intricacies of your new responsibilities.

To the game’s credit, each of its myriad systems is a full-fledged minigame of its own, and they interact with each other in interesting ways. When preparing a body, for instance, you can choose which, if any, organs to harvest, and later you get the option to perform trickier procedures such as embalming or extracting more body parts. The parts you keep can later be sold, used for crafting, and, yes, even cooked. However, each body also carries a rating that can increase or decrease the quality of your graveyard, making pilgrims more or less likely to visit your church, and thus influencing how much money and faith (one of about half a dozen in-game currencies) they leave behind after your weekly sermon. The more you hack away at the bodies before burying them, the less value they have in your cemetery. The afterlife, it seems, is something of a beauty contest. If you get a little overzealous with the scalpel and end up with a body that’s detracting from your graveyard’s appeal, you can cremate it instead, or, if you’re feeling less scrupulous and unconcerned with long-term consequences, just chuck them in the river.

If that all sounds complicated, well, it is, and it only gets more complex from there. Seemingly every item in the game has more than one use, and you have to constantly choose what goal you’re chasing in the moment. This makes all of your actions wonderfully interconnected, but it can also slow your progress to a halt. You might put all your effort into exploring the dungeon beneath your church until you need high level farming skills and processing equipment to make your next suit of armor, or work to build an immaculate graveyard full of intact tenants, only to hit a point where you need to butcher at least 10 bodies to progress in another area. Of course, by this time, bodies don’t come for free, so you’d better hope you’ve been growing carrots to feed the donkey that delivers them for you. You can buy a lot of the materials you’ll need for any given goal, but money is hard to come by, and trying to spend your way around obstacles is only possible if you sell everything you can, thus leaving you constantly under-equipped for the next challenge.

One way of looking at this is that the game’s systems are carefully balanced, and it encourages you to explore everything it has to offer to keep making progress. On the other hand, it makes it nearly impossible to specialize and avoid the activities you’re not as keen on. The game doesn’t do a great job telegraphing what resources will be important to focus on, or even how to procure some of them, further stalling any sort of intentional progress. Upgrades are also locked behind a daunting technology tree, so learning to do things as simple as collecting mushrooms or building a slightly better anvil requires spending three different types of research points, which you acquire through most of your normal crafting and collecting activities, or through a special research process you learn fairly early in the game. Progress is further obscured by the game’s journal, which tracks the huge number of tasks you may have active at any given time, but is light on details, often telling you what goal you’re meant to accomplish, but not how to do it.

One major caveat is in order here. Life sims are generally meant to be played over weeks if not months, and usually in a less goal-oriented way than most games. Even then, Graveyard Keeper seems to be on the slower end of the genre. It seems designed for you to work slowly toward a handful of goals at one time, chipping away slowly over many play sessions, changing direction at your leisure. You may not get the optimal experience if you’re, for instance, a critic playing the game on a deadline. Taking your time won’t make the sometimes stingy objectives more clear or untangle the knot of upgrades, but a slower pace of play could make its stepwise progression feel more satisfying.

There are some areas where Graveyard Keeper shines regardless of how you play it. As far as presentation goes, it’s pretty much flawless. Its high-res pixel art is drop-dead gorgeous and beautifully animated, and its excellent soundtrack sets the tone for the game perfectly, though the looping tracks felt a little short for songs that you’ll be hearing countless times as you play. Perhaps most surprisingly, Graveyard Keeper is a much better written game than I expected. There’s a ton of personality packed into its characters, from the fledgling cult leader to the communist donkey determined to free himself from the yoke of the bourgeoisie. The game is legitimately funny, and not in the broadly wacky, meme-laden way that most games try to pass off as humor. The game’s humor is appropriately dark, given its subject matter, and the story takes some startlingly grim turns as it progresses.

Partially as a consequence of its story, Graveyard Keeper doesn’t feel quite as personal as games like Stardew Valley. You don’t create your own avatar, instead playing as one particular male protagonist, and your homestead is less customizable. This may not seem like the biggest deal, but for this genre, it’s the difference between an enjoyable game and one that feels like a second home. There are pre-determined areas for your vineyard, your crops, your tools, and so on, though you’re free to arrange the individual items in each area. Relationship building is also comparatively lacking. Instead of befriending and getting to know your neighbors, you fill villagers’ happiness meters by completing tasks for them, which unlocks new quests, items, and information. There’s plenty in Graveyard Keeper to keep you hooked for a long time, but like the game’s protagonist, I never quite wanted to live there.

Graveyard Keeper makes a lot of bold choices, replacing the friendly, relaxing atmosphere of typical life sims with a more goal-directed structure in a more cynical setting. While I found its pace tedious at times and would have preferred more focus on the grave-tending mechanics, more patient players will find a lot to like in its wealth of well-developed diversions, fantastic art and music, and pitch-black comedic aesthetic.

A committed indoor kid, Bryan moved from Pittsburgh to Los Angeles for a prettier landscape to ignore. They can be lured outside with promises of taco trucks and film festivals, and enjoy trawling through used book stores for works on the occult. Bryan has been gaming since the SNES era and is a sucker for good pixel art.
Related Articles: Graveyard Keeper, Indies
Share
Tweet
Share
Submit