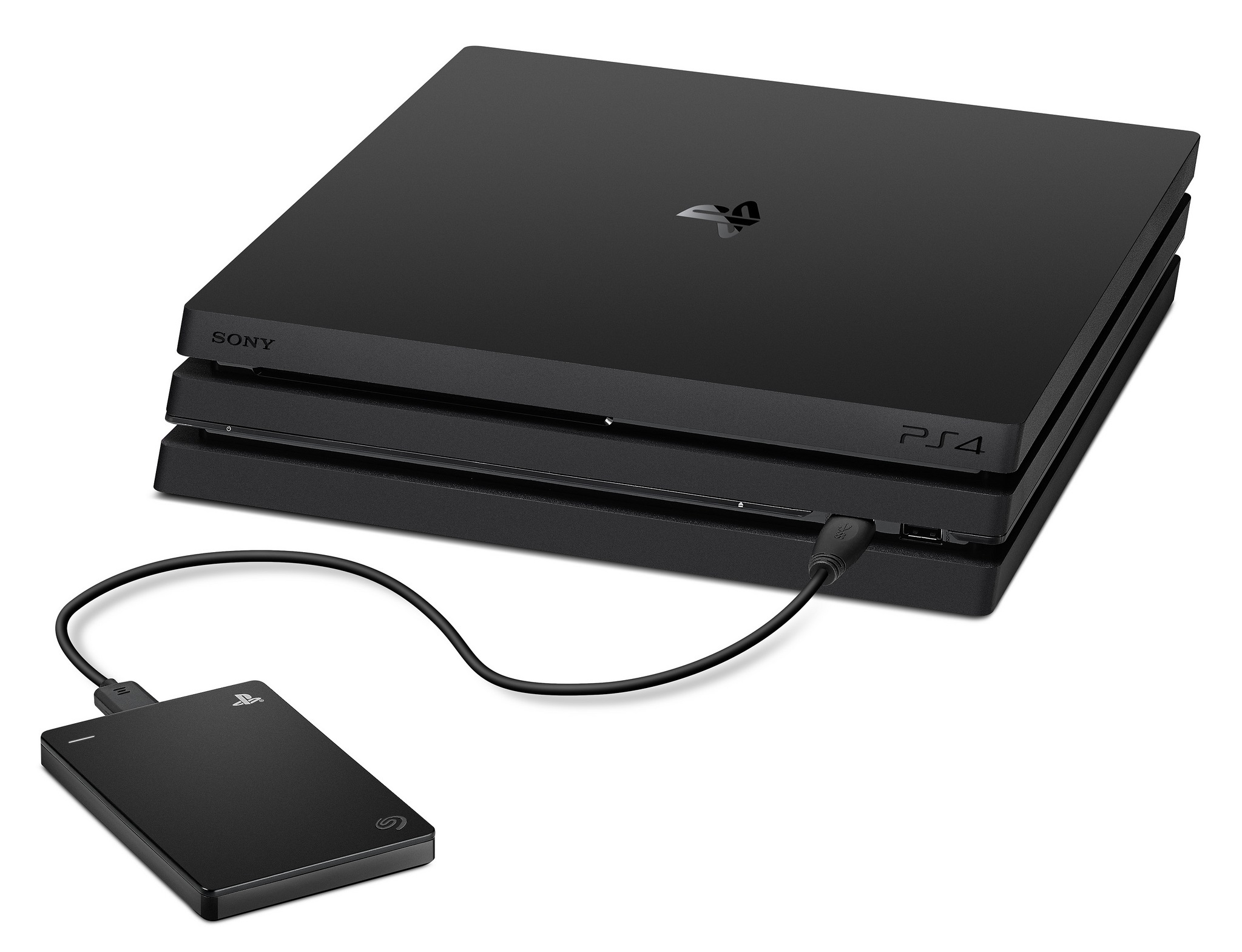 The holiday season may be behind us, but if you’re anything like me, a combination of gifts and sales has left you delightfully overburdened with games with games yet to be completed. My second-hand PS4 didn’t exactly come equipped with the biggest hard drive, and storage space quickly became a premium. Imagine my delight at the chance to check out the 2TB Seagate Game Drive for PS4 Systems.

Before we jump into specs, let’s talk about the look of this slick little drive. Black, sleek, and quite simple, the drive bears a small PlayStation logo in white at the top of the drive, and a slick, raised, black-on-black Seagate logo on the bottom corner. The upper right corner has a small light which glows white to show that the drive is plugged in and pulling power. This is important as this drive can be rather power-hungry, and may need an external, powered hub if you are trying to connect it to a device other than a PS4. 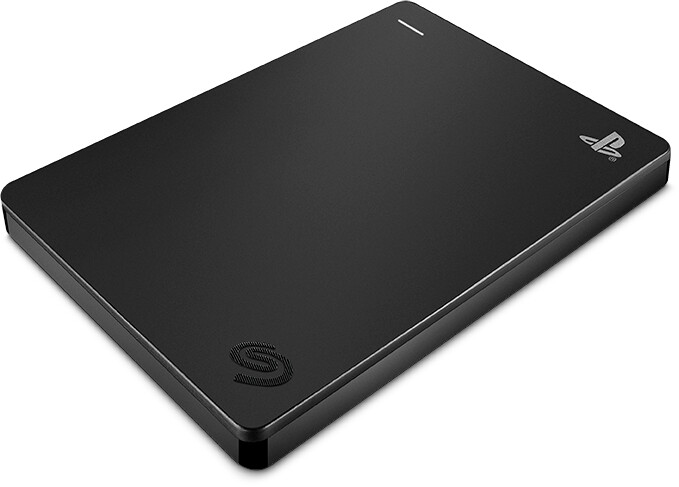 The back of the drive is where the real beauty lies, with a large, inlaid balck-on-black Seagate logo spanning most of the drive at an angle, and the device information, also at an angle, also set on the same stylish angle. The cord is rather standard for a USB 3.0, black and unbraided, but it does the job. It’s understated, clean, and looks great beside a PS4 console, as it doesn’t quite stand out nor blend in. It’s portable in every sense of the word, small, light, and can pull power from most any device, though it was a little too power-hungry for the USB port on my TV.

Setting up the drive is about as easy as it gets; it’s plug-and-play nature means you don’t need a separate power cable nor any special software. The drive has room for around 50 PlayStation games, more if, like me, your collection mostly consists of indies. The drive also has plug-and-play support for the PlayStation Media Player app, and I was able to treat mine as a complete media source, loading it down with my personal collection of nearly 200 movies and over 150 TV shows in addition to my PS4 library. 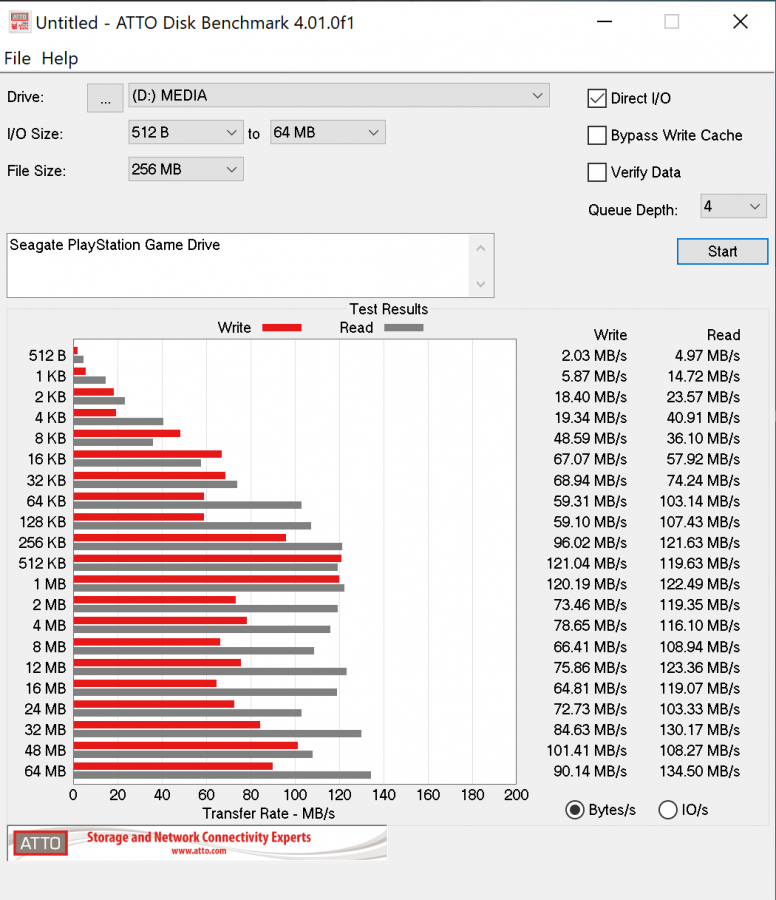 Ok, so let’s talk about specs. It is important to note that this is a HDD with moving parts, not a SSD. Fortunately, we have spent some quality time with external drives of both types, so we have a great baseline to compare it to. The Seagate’s SSD Game Drive benchmarked very consistently at 537 MB/s, this one seemed to settle pretty consistently in between the 90 MB/s and 120 MB/s mark. It’s not quite as consistent or fast as the Seagate Gears of War 5 Special Edition HDD which we looked at in August of last year, but still settles comfortably on the higher-than-average end of the scale for mechanical hard drives. I certainly put this drive through its paces, transferring upwards of 500GB of files in one go, and running it through a number of tests, but it showed decent consistency in terms of both reading and writing speeds.

2TB Seagate drives run for around $60 on Amazon, and as of the time of publication, the PS4 Seagate Game Drive for $79.99, $10 off the normal price. The branding adds a little bit to the cost per GB, but the official branding and plug-and-play nature arguably make up for that. The drive also comes with a three year limited warranty, so it’s likely that your drive will be covered long after you’ve stopped using your PS4.

The HDD nature of this drive doesn’t feel like a future-proofing investment, what with the inevitable release of the PS5 looming on the horizon. That said, this is far and away a more affordable storage solution, given that a 2TB external SSD drive can easily run $300. It’s also a solid and attractive all-around storage device; I brought mine to the office while working on a particularly graphics-heavy project, and received no shortage of comments and questions about my PS hard drive. It’s difficult not to appreciate the simple elegance of this drive, especially if you’re into PlayStation branding, or want a sleek, matching look for your gaming space.

The Seagate Game Drive for PS4 Systems is a sleek, light, and fairly consistent plug-and-play storage option. While it’s not SSD, it’s a great way to store all your holiday PS4 games, and looks great beside the console. The three year warranty means that it will likely keep on kicking, as a slick personal portable storage device long after the launch of the PS5.