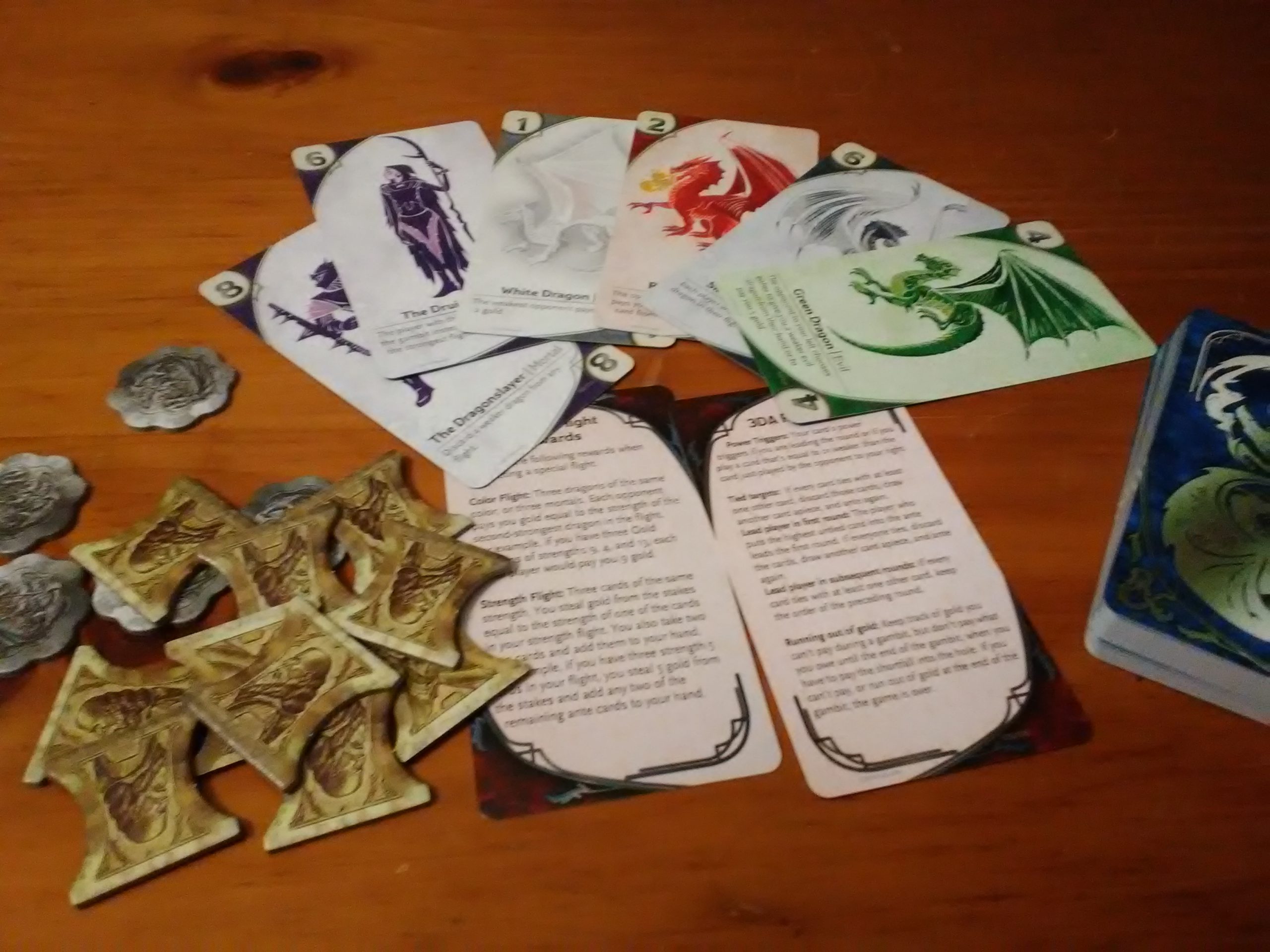 Luck, strategy, and some classic manipulation come together in Three Dragon Ante. What was once an in-game prop, modeled as a poker-style experience couched within a D&D style fantasy world, is now rereleased with the Legendary Edition. This new collection represents the ultimate version of the game, with new art, cards, and options to enhance your experience. Styled as both a game on its own and something for use within your D&D sessions, Three Dragon Ante really only achieves one of these goals, but with so much variety and gusto that it more than justifies the experience.

Three Dragon Ante contains 70 basic cards for use every game, as well as 30 additional ones you can add in to create more variety. Rather than suits, the colors are broken up by the differing types of chromatic dragons. The large cards feature stylized art, seeming every bit like the illuminated manuscripts that fantasy characters would use to depict their surroundings, but do come with one issue, that being the size. The quality is more than adequate, but you won’t be able to sleeve these oversized cards, if that is your style. There are also plenty of gold and silver tokens, all in cardboard, but you will have to track debt on your own somehow. The components fulfill their function, but with the caveat that closing the box properly is a pain. You would think a game with only cards and tokens wouldn’t have this problem, but there is a slight disconnect between the thickness of the components and the box, but one you can fix with some creativity.

Setup for Three Dragon Ante is fairly simple, depending on the number of variant rules you choose to employ. Via the standard method, you take all 70 cards of the starter deck and shuffle them together with 15 mortals and 15 dragons, all chosen randomly. The randomness (which is of course adjustable) helps create a sense of uncertainty. Counting cards, and therefore guessing your opponents’ capabilities, is exceedingly difficult when you don’t know what cards are in the deck, or what powers they may bring along. Once the decks are constructed, each player draws six cards and gains ten gold. Then you are ready to begin. 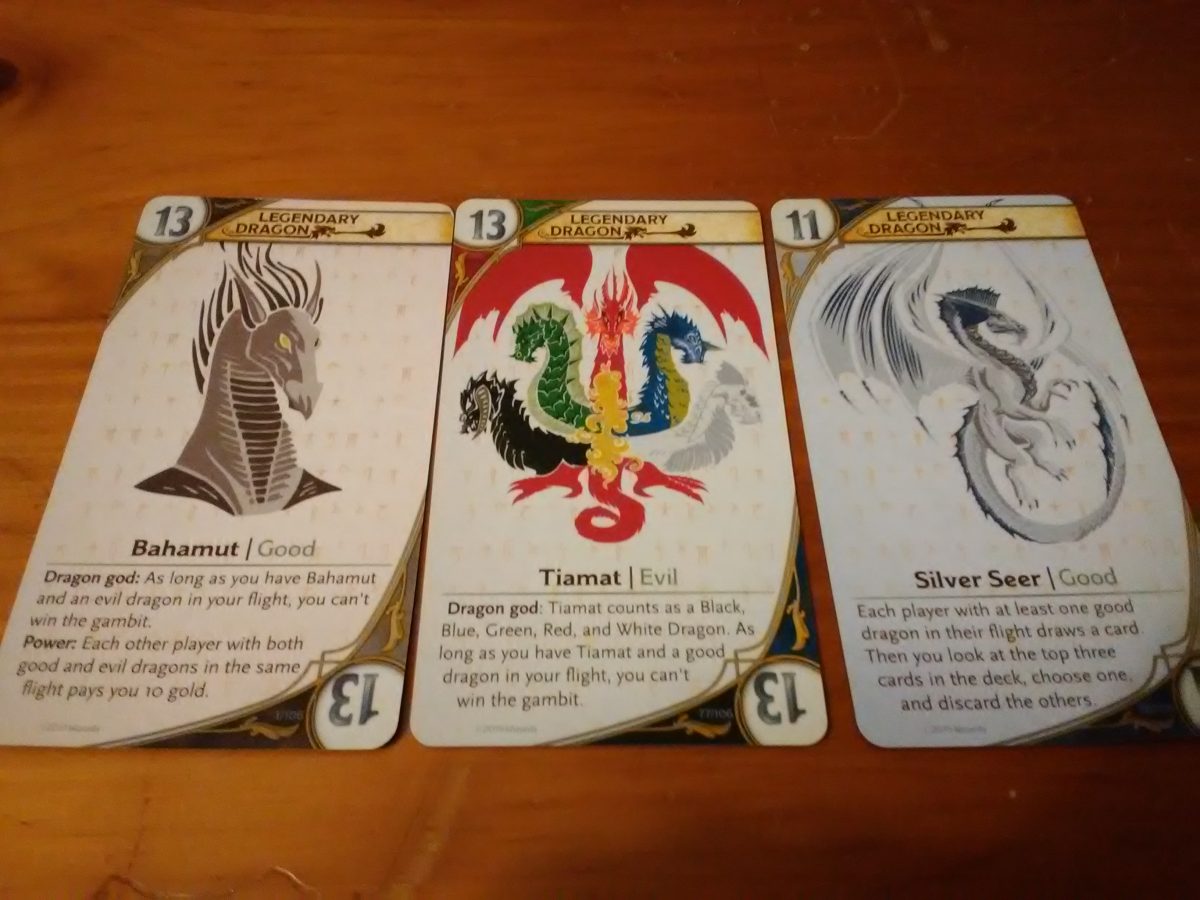 Each round begins with every player placing a card from their hand face down. When all are down, you reveal those ante cards, and each player pays gold equal to the value of the highest revealed card. This card remains up for the rest of the gambit, and its owner leads the game by playing first.

Before I get deeper into the rules explanation, I want to talk about how much complexity there is in this one phase of the game. With the play of one card comes many strategic questions: do you want to go first or later, because of the abilities of the cards in your hand? Do you save a powerful card to play, or burn it to go early and burn gold from other players? Is it worth it just to negate the antes of other players? If everyone at the table is thinking something similar, should you just play a low power card? You will find these kinds of calculations all over the game, forcing you to take risks on the power of your own hand and strategies of the other players.
Once you get into the gambit, each player in order plays a card from their hand. The leader’s first card triggers its power, and any card that is lower than the previous one played also triggers its power. The rare Dragon God cards can always play their abilities, which cannot be copied by other cards. There are quite a few abilities, all of which are powerful in their own ways. It’s for this reason that Three Dragon Ante loses cohesion at higher player counts. While minor abilities might steal some gold from other players or gain extra cards , you could also negate other players’ cards, copy abilities, or negate negative effects. With all of these powers flying around at greater and greater frequency, being able to accurately calculate your hand’s value eventually becomes impossible. The optimal player count probably tops out at around four, where five starts to get into more chaotic territory.

That said, the nature of triggering abilities creates some fascinating interactions. It makes becoming the leader a more attractive proposition, but it also forces a question for everyone at the table. You can play powerful cards to increase the strength of your flight, but risk giving an advantage to your opponents. You will have to weigh the utility of playing a lower strength card against its ability, or play a higher strength card and risk creating openings for other players.
This continues until everyone has played three cards. At that point, you score the flight. The rulebook doesn’t actually say how you do so in the appropriate place, which is a minor but conspicuous annoyance. Whoever has the highest strength of cards before them wins the pot created by the ante. If you have played three cards of the same color, each player pays you gold equivalent to the value of the second highest card you played. If you played three cards of the same strength, you can steal that much gold from the pot, and take any two ante cards into your hand.
Once a gambit is complete, everyone draws two cards. If you have one card in hand at the start of your turn or zero cards at any time, you reveal the top card of the deck, pay its cost, and draw four cards. 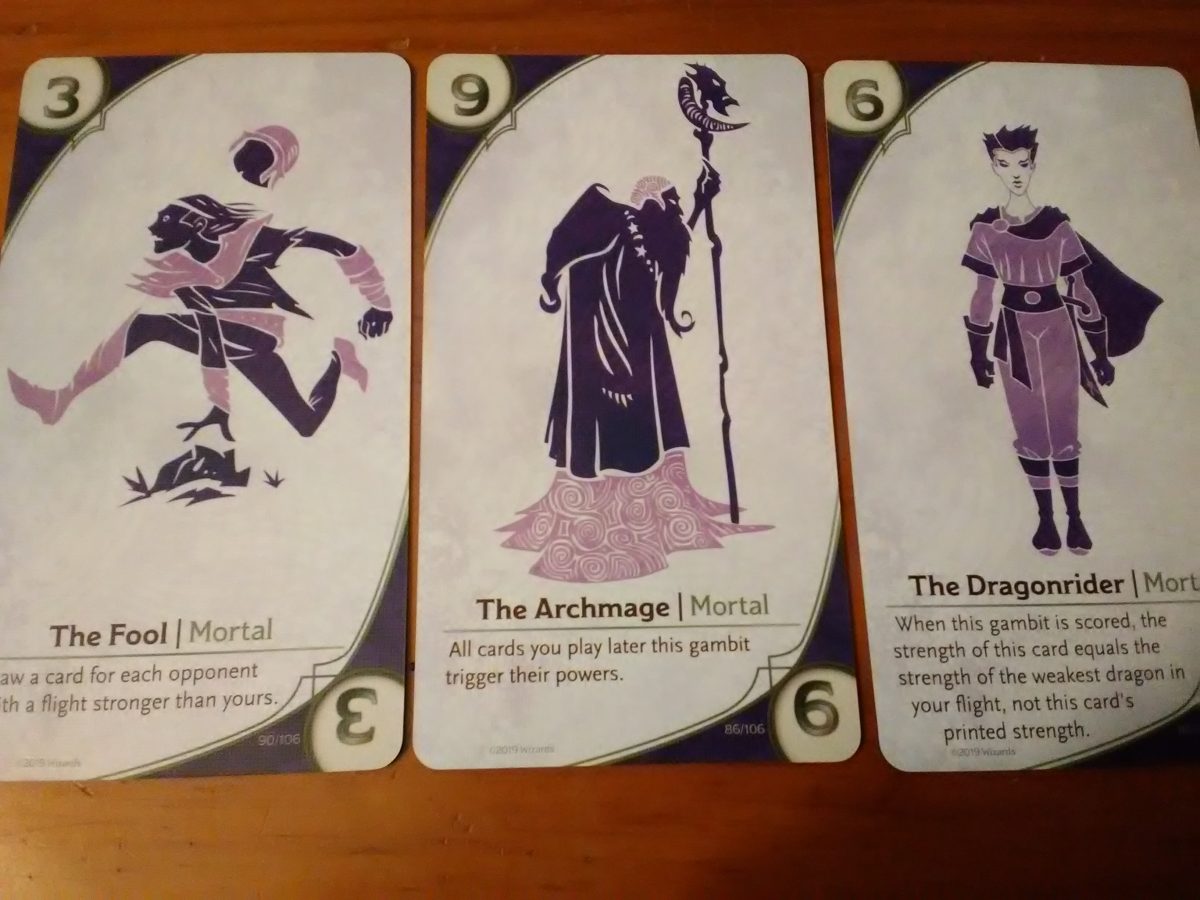 The game continues until someone has zero gold in their hoard. This can lead to long games, especially when someone changes strategy from winning to mere survival. While everyone is constantly leaking gold into the pot, the variety of ways to steal it back (which increases at higher player counts) can really make the game drag. You may want to limit the number of rounds that you play, to determine the winner by highest gold value after a certain point.

The game plays and teaches very quickly, but only when it comes to the basic rules. Really learning to master its intricacies, which include the proclivities of everyone else at the table, is a more time consuming process. Your first few encounters with Three Dragon Ante will be complete chaos, as you weigh the value of differing strategies and tease out other player’s strategies. I think a lot of people, especially those so enamored with playing new games that they can never sit down with one more than a few times, might not care for Three Dragon Ante, but those players will be missing something. If you spend time engaging with this game, you will find a surprising depth of strategy. The cards in your hand can determine a lot about how you play your hand, but it would be unfair to dismiss a game based around gambling based on that alone. You see, regardless of your hand, you have a ton of options to consider. A weak hand, for instance, can consistently trigger abilities while locking other players out of theirs. You have many ways to bluff players and try to draw out the power of everyone else’s hands. I was never much of a poker player, but the theme and adjustments that Three Dragon Ante brings to the table makes it much less intimidating of an experience. 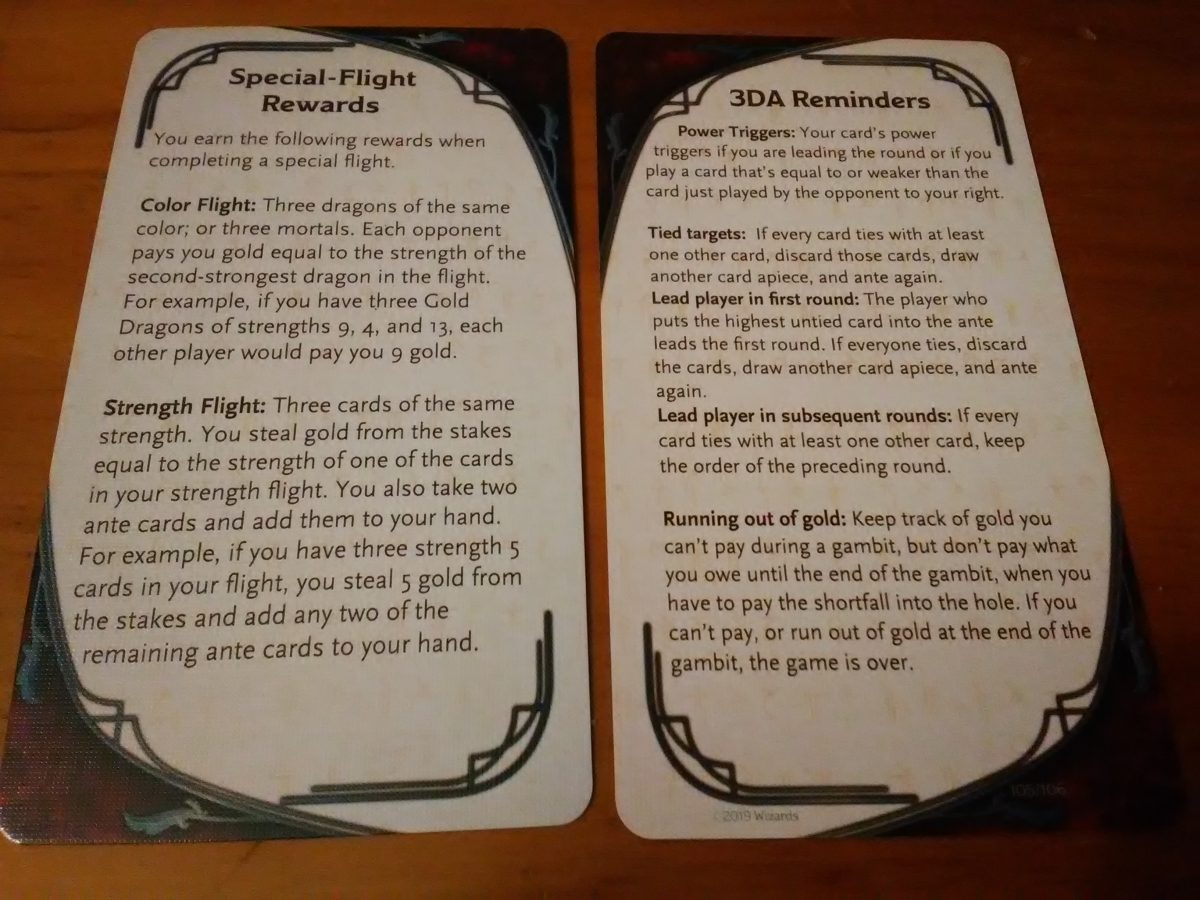 As an experience on its own, Three Dragon Ante excels. As a game within a game, diegetically inserted into your D&D game, I can’t say that it performs as well. For one, a game of Three Dragon Ante can take a while, depending on the variant rules you choose to employ. That half hour to forty-five minutes (again, roughly) can be a serious chunk out of your game time, which you would rather spend battling oozes or investigating clues or ruining the GM’s well crafted setting by setting most of it on fire. The gold values you gain in-game also amount to peanuts in most fantasy systems, or at the very least 5e, so why spend a portion of your game gambling for the same amount of gold you’ll find in the first chest in the dungeon? The game also doesn’t provide options to modify the experience in the world of your RPG. It doesn’t offer, for instance, the option to use a successful Insight check to reveal a card in another player’s hand, or a Sleight of Hand check to cheat with gold or cards. Beyond some slang it suggests you use to ingratiate yourself to the culture of Three Dragon Ante players in-game, there isn’t much support for using the game beyond just playing it. Compared to many of the homebrewed gambling options I have seen for D&D, all of which move more quickly and integrate with less effort, I doubt Three Dragon Ante will hit the table often during a session.

Three Dragon Ante feels every bit like the fantasy equivalent of poker, and excels as a game of bluffing, intuition, and gambling. While I have doubts that it would function as intended within the context of an RPG session, on its own it more than sells itself, with slick mechanics and deep room for strategy.