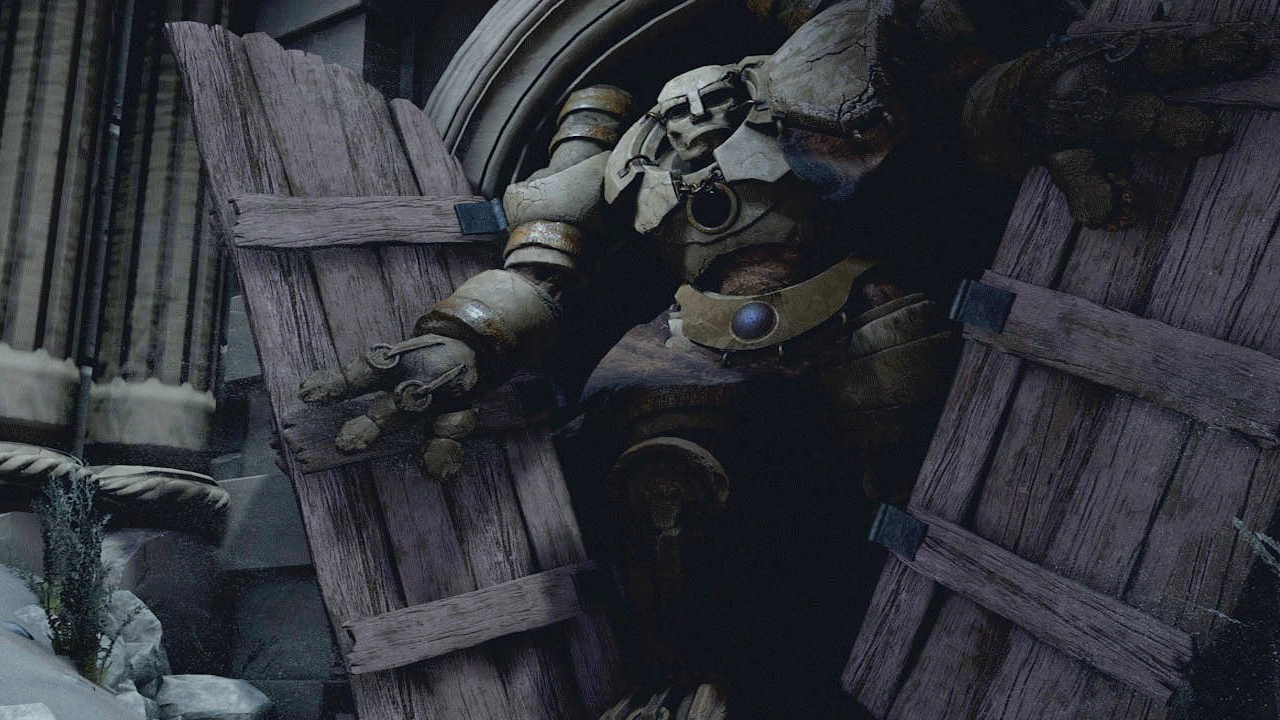 Announced in 2015, Golen was one of the most hotly-anticipated PSVR Exclusives. Slated to launch on March 13th, 2018, the game suffered a series of delays, finally launching in November of 2019. With 18 months of additional polish, could developer Highwire Games deliver on the promise and wonder we saw nearly four years ago? It’s both a resounding yes, and a nauseating no.

Golem tells the story of two sisters and their father, all relic collectors. Dad does his best to eek out a living, but the older sister of the trio seems to have an ace up her sleeve — a golem control rod. With this, she’s able to enter a place called The Endless City. The Endless City has a protective shield that prevents anything living from entering to plunder its treasures. When an accident causes the younger sister, Twine, to be injured and bedridden, Golem truly begins.

After just a few moments of setup, the control rod is passed to Twine. As she’s still young and inexperienced, the ability to directly control the lumbering golems are well out of her abilities. Instead, her first golem is a little rag doll given to her by her sister. Heading below her bed to listen in on her father’s conversation, this little doll is unfortunately overwhelmed by the dune bugs underneath the floorboards. Zipping back to Twine sitting on her bed, the game then presents you with a light crystal to keep the nasty creatures at bay, sending you back underneath. This roguelike pattern and infrequent checkpoints is a staple of Golem, and the first of a series of problems that ultimately became insurmountable.

Golem is a story driven interactive adventure. Starting from simple beginnings of controlling the ragdoll, moving on to basic golem controls, and progressing to combat, it looks to slowly bring you into the world that Highwire created. That said, I’ve rarely felt like a game doesn’t want me to play it since I started playing VR games.

The controls in Golem are nothing if not obtuse, and frankly a little dated. Golem uses the Move controllers, but is played from a stationary standing or seated position. Since the Move doesn’t have an analog stick, Highwire opted for movement by leaning your head forward slightly. Teleport controls might have done the trick, but instead it’s a 5-10 degree tilt forward or backwards to move in the indicated direction. Free motion ensues, and wherever your head is faced, your golem goes. If you’ve ever ridden Disney’s Mission to Mars ride (it holds you in the seat with centrifugal force) and attempted to lean forward, you understand the immediate nausea Golem brings with it. There are also snap turns, but we’ll get into the hiccups in that mechanism in a moment.

To aid with the nausea problem, there is a setting called ”Dream Tunnel Effect”. This setting affects the size of the vignette around your cone of vision. Clearly the developer went with a style choice here as, instead of using a black image around the cone of vision, you instead see a glimpse of what Twine is seeing, blending the two scenes together. This is profoundly disorienting, and my wife (who has an iron VR stomach) was disoriented as well. Neither of us was able to play for more than 30 minutes at a time before we were awash with sweat and feeling queasy. 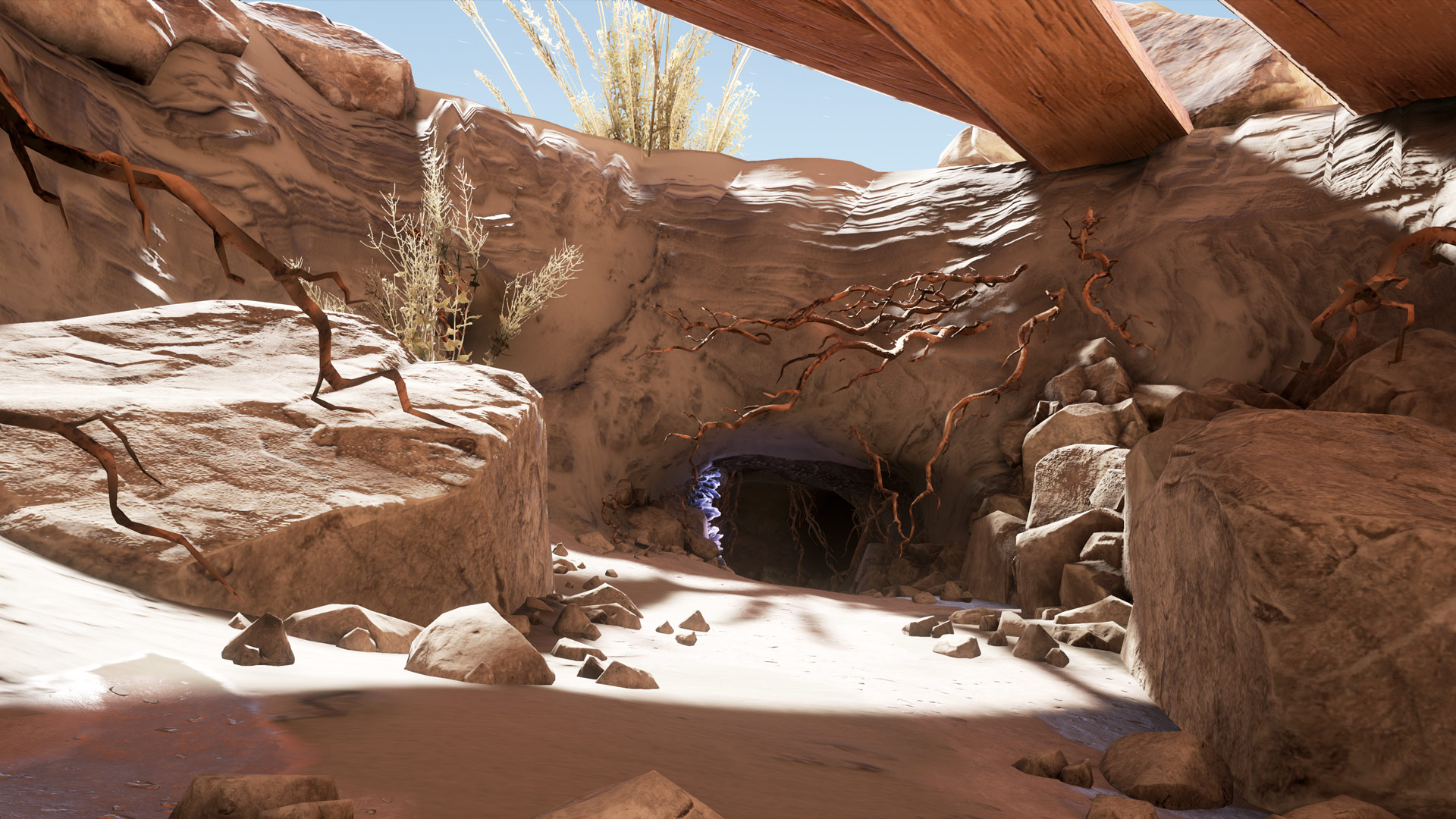 The game is very pretty, for sure.

The Dream Tunnel Effect has three different settings — none, some, and high comfort. Turning on high-comfort makes the vignette bigger, showing even larger parts of Twine’s vision, making the nausea problem even worse! Setting it to none does the desired effect, removing the double-world vignette entirely. In addition to the Dream Tunnell effect, you can also adjust your turn speed, but the game has both snap turns and head-tracking turns enabled at the same time, and since the PSVR HMD doesn’t track at the same speed as your head movement, it creates a timing issue that again leads to nausea.

While we are digging into the mechanics of Golem, we have to talk about the menu system. Because they didn’t listen to their testers (I’m certain I’m not the only one who suggested this), the menu is blue on blue color. Figuring out which thing is selected is a challenge as the color differentiation is marginal at best. That said, it’s a bit of a nitpick as you don’t spend any meaningful amount of time in the menus.

The times in between the various areas in Golem are punctuated by long load times when you’ll be swimming through a starfield, having to lean your head forward to chase wisps of energy until you intercept them (meaning the game loaded). There is also an odd audio bug with Golem that not only breaks your immersion, but can scare the crap out of you. Without any sort of on-screen indication what it’s telling me, my PlayStation would sudden chime loudly. When you are slogging through detritus trying to avoid being eaten by insects only to have the PlayStation 4 chime at you at maximum volume, it can be startling. 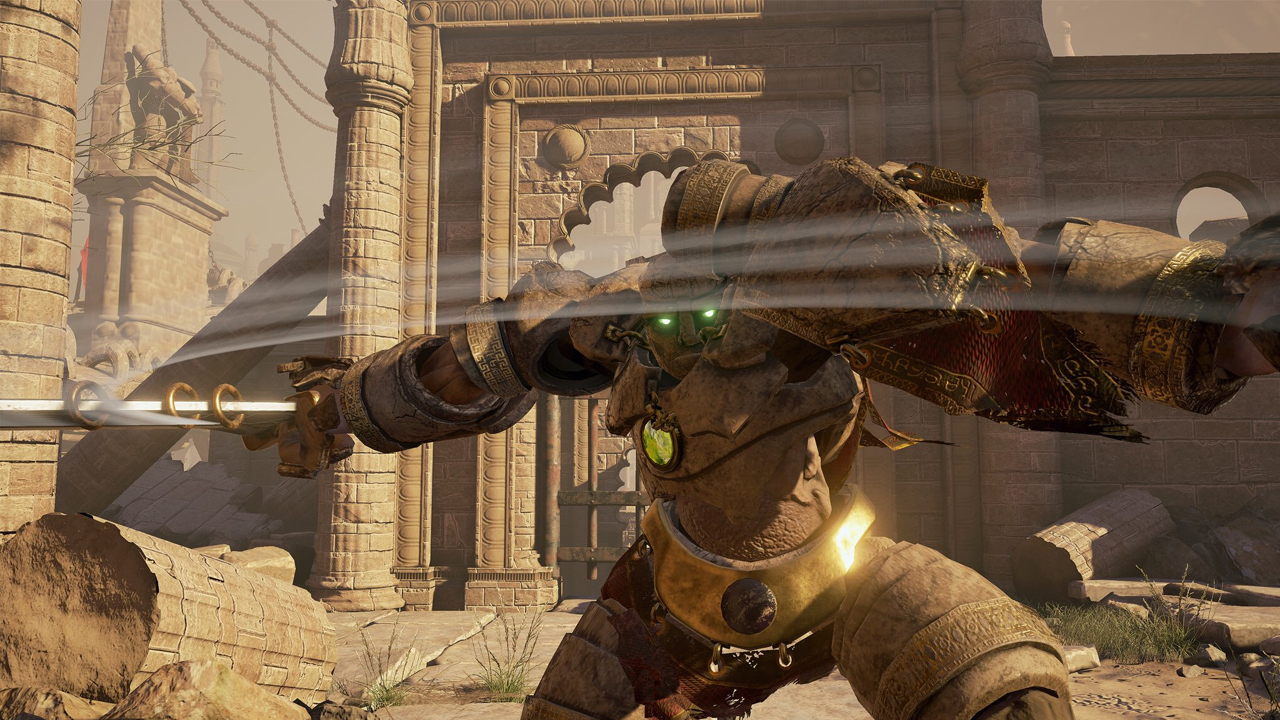 The golems are HUGE, and combat should have been a highlight. Timing and tracking, however, are a problem.

If you can hold it together long enough to reach combat, you’ll only find more disappointment. Golems can be controlled with a garnet gemstone and equipped with swords, but you’ll need to find masks to authorize them into the different areas of The Endless City. Here again we see the roguelike elements rear its head as these items are inexplicably single-use, leaving you grinding from your last checkpoint before you run into whatever killed you last.

Combat is a react, act, react, act sort of situation. You’ll intercept an incoming strike, then counter attack with your golem, block again, and then strike. Eventually an obvious weak point will reveal itself, giving you a chance to finish off your foe. If it worked well, it’d be fine, but unfortunately this is where I finally reached my breaking point. Too many times I’ve blocked only to watch foes zip right through my guard, or worse, ignore my guard and then smash me with an unblockable attack. Back to the last checkpoint, but now without my consumables, and a long walk ahead. With the nausea factor and poorly tested combat, I just couldn’t continue.

If there’s one shining light in Golem, it’s that it is pretty. The Unreal engine serves the game well, resulting in some highly detailed environments, lighting, and oversized characters full of life. The golems are a thing to behold, and the world that Highground has created utilizes the PSVR hardware well, keeping a rock solid framerate. It’s just hard to experience this beautiful world without better motion controls and a better anti-nausea approach.

I haven’t bailed out on a VR game in a while, and only the most severe of nausea will cause me to eject completely rather than grind it out over time, but Golem is just painful to play. There’s too many games that have done it cleaner, and with better motion mechanics -- play them instead.

Ron Burke is the Editor in Chief for Gaming Trend. Currently living in Fort Worth, Texas, Ron is an old-school gamer who enjoys CRPGs, action/adventure, platformers, music games, and has recently gotten into tabletop gaming. Ron is also a fourth degree black belt, with a Master's rank in Matsumura Seito Shōrin-ryū, Moo Duk Kwan Tang Soo Do, Universal Tang Soo Do Alliance, and International Tang Soo Do Federation. He also holds ranks in several other styles in his search to be a well-rounded fighter. Ron has been married to Gaming Trend Editor, Laura Burke, for 21 years. They have three dogs - Pazuzu (Irish Terrier), Atë, and Calliope (both Australian Kelpie/Pit Bull mixes).
Related Articles: Golem, VR
Share
Tweet
Share
Submit