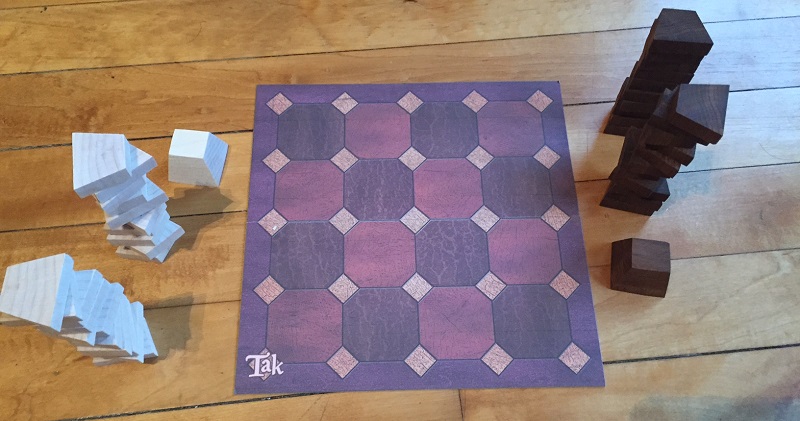 Games like chess exist outside of time. Chess feels less like a board game as we know it—with a designer, a publisher, and a discrete release date—than a fundamental element of the world. It has been as it is now for centuries. It will exist for centuries. It has a palpable feeling of the ancient, a timelessness that makes the game transcend its place and become a cultural touchstone, an undisputed truth of the universe: Chess is. Chess was. Chess will be. It’s hard to conceive of Chess being invented by a game designer. It seems as universal as the law of gravity. Tak is a two-player abstract strategy game by James Ernest and Patrick Rothfuss that tries to bottle that ancient timelessness with a brand-new original design. Color me surprised, but somehow it does.

a Tak board and pieces ready to go.

First, some background. Rothfuss is not a game designer, but a fantasy author known for The Kingkiller Chronicle, an as-yet-unfinished trilogy about a legendary hero/musician named Kvothe, as told by Kvothe himself as a disillusioned older man. There’s dragons, wizard school, conspiracies, your standard fantasy stuff—done very well if you’re into it. In the second book, Kvothe finds himself in the court of a foreign land playing Tak, a “beautiful game.” It’s described only as a strategy game using white and black stones, and many readers assumed Tak was another name for Go. Rothfuss never intended to make Tak real—he assumed, wisely, that the task of designing a timeless classic of infinite strategy from whole cloth was too difficult to be attempted—but here we are. And it is beautiful.

In Tak, you want to make an unbroken line of your pieces connecting two opposite sides of the board (the board can be as small as 3×3 spaces up to 9×9, the complexity ramping up the bigger you go).

A victory for white, with a road of pieces connecting the left and right sides of the board.

On your turn, you place a piece in an empty space. Existing pieces can move one space, stacking on other pieces if they are there. The player whose color tops a stack can then move the entire stack multiple spaces, leaving one or more pieces behind in every space it covers.

You can choose to place a piece standing up, which doesn’t count for your game-winning line of pieces, but prevents other pieces from hopping on top of it.

The standing black piece prevents the white player from moving pieces onto its space.

However, each player gets a single “capstone,” an oversized piece that can flatten standing-up pieces when it lands on one.

A white capstone can flatten the standing black piece and complete a game-winning road for the white player.

That’s the rules! For real! All of them!

You will grasp the rules of Tak immediately. You will laugh as you realize you are playing pieces randomly. You will, at some point, feel the gears in your head start to turn. You will glimpse the slightest wisp of the strategy this game has to offer, and your mind will be blown. And you will want to play again and again.

I wish I could talk more about Tak, but it is simply too deep to for me to become truly knowledgeable about it and still deliver a timely review. It’s like how reviews for games like Counter-Strike or Dota 2 are essentially formalities. These are titles that only reveal their character after hundreds or thousands of hours played. I don’t know if Tak can compete with Chess or Go in terms of its strategic depth. I don’t know if it is solvable or if certain strategies will become game-breakingly dominant. It is not possible for me to discern that and still publish this review in 2016.

What I do know is that Tak is fun. It feels ancient, and that’s a monumental achievement. The rules are elementally simple, and I am fairly sure no one would doubt you if you introduced it as game from third century China or something. It features the strategic stone placement of Go and the aggressive movements of Chess, but with its own unique flavor of area control. The feeling of controlling a fat stack of five or six pieces is a potent one, knowing that you can deposit three tiles of your color in a line at any time, and that your power forces your opponent to respond. Seizing control of a large stack of pieces can dramatically change the tenor of the game as the controlling player instantly threatens huge swaths of the board they couldn’t reach before. It’s sometimes easy to get so caught up in dramatic struggles for control of big stacks that you let your opponent pull off a stealthy win elsewhere on the board. Or maybe that’s something that only happens to total beginners! As I say, I have no idea yet. All I know is, I like Tak.

You don’t really even need a board, just draw a grid on some paper. You can get a bunch of wooden squares for cheap at a hardware store. It’s so flexible component-wise that it does feel outside of time, especially in an era when games are getting prettier by the year. My review copy was a handmade non-retail 5×5 prototype featuring the least flashy components in my collection, and after a few turns I didn’t even notice it. A similar set (with slicker pieces, of course) is available on Tak’s Kickstarter for a reasonable $25.  The rules are free online and I highly recommend you give it a try. We might have something timeless on our hands here.

Tak somehow lives up to its fictional origin as a timeless, ancient game of effortless elegance and deep strategy. It’s instantly engaging and only becomes more engrossing as you begin to grasp its depths. Though it’s hard to say how deep the design is without spending years studying it, it’s so easy to jury-rig a set that there’s no reason you shouldn’t get into Tak.