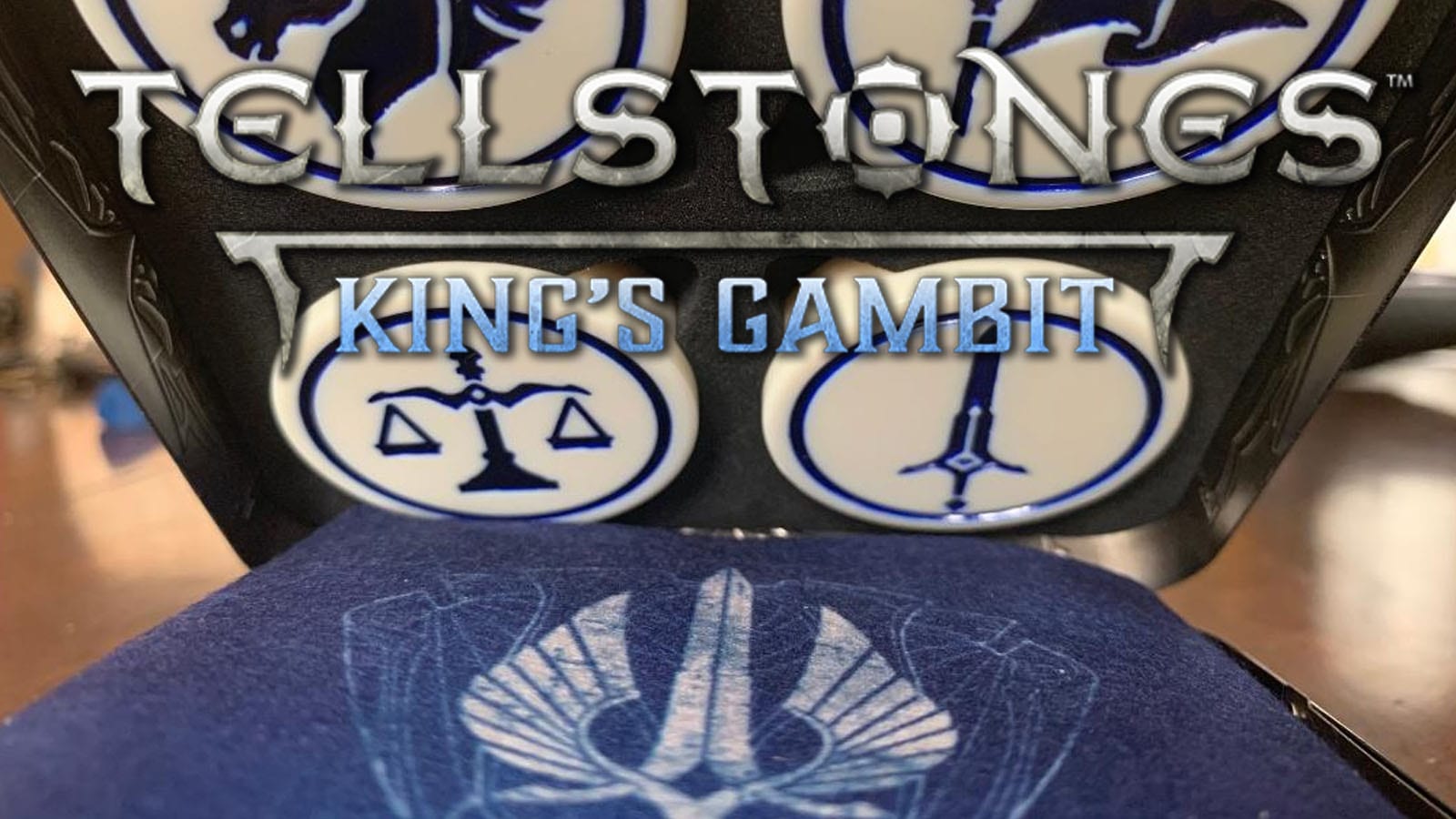 Do you have an excellent memory, or can you at least bluff that you do? If either of these are true, then Tellstones: King’s Gambit might be the game for you. Gallstones is the second tabletop game produced by Riot Games, the developers of the hit game League of Legends, and takes place in that world of Runeterra. Their first game was Mechs vs Minions which was received very well, but this game differs greatly from that first installment.

One thing that hasn’t changed from their first game however is the level of quality. This game comes in a literal metal box that hinges up, and the pieces feel like they are meant for a king. Tellstones is an abstract bluffing game for 2 or 4 players which includes perfect information. While you can play with 4 people, it works best as a 2-player game as you challenge your opponent to see who has the best memory or bluffing skills.

Getting started with this game is very simple. There are seven stones which all have a unique symbol on them, from a hammer and shield, to a crown and flag. These seven stones are placed face-up to the side in a pool that will be drawn from. The playmat is then placed in the middle of the table between the two players. This is known as the Line during the game. Each player will then also receive a transparent token that will go next to the game mat to track their points. Now the game is set up and ready to start.

To win a game of Tellstones: King’s Gambit you only need three points. On your turn you have a choice of one of six actions. After performing your action, the turn passes to the next player, and this continues until someone is victorious. The first action is to place. You will point to a stone which is in the pool of unused stones and tell your opponent which stone you choose and where to place it on the Line. The only rule for placement is that it must be on the right or left of any stones in play and will be placed face-up. The second action is to hide. For this, a player will point to a stone and the opponent will flip the tile face down in the same position. The third action is to swap and, as the name describes, you will point to two stones, either face-up, face-down, or a mix and have your opponent swap their positions. The next action is to peek, which allows you to look at one of the face-down stones to help refresh your memory in case you forgot what a stone was. If your opponent scored a point on their last turn however you can look at three stones. 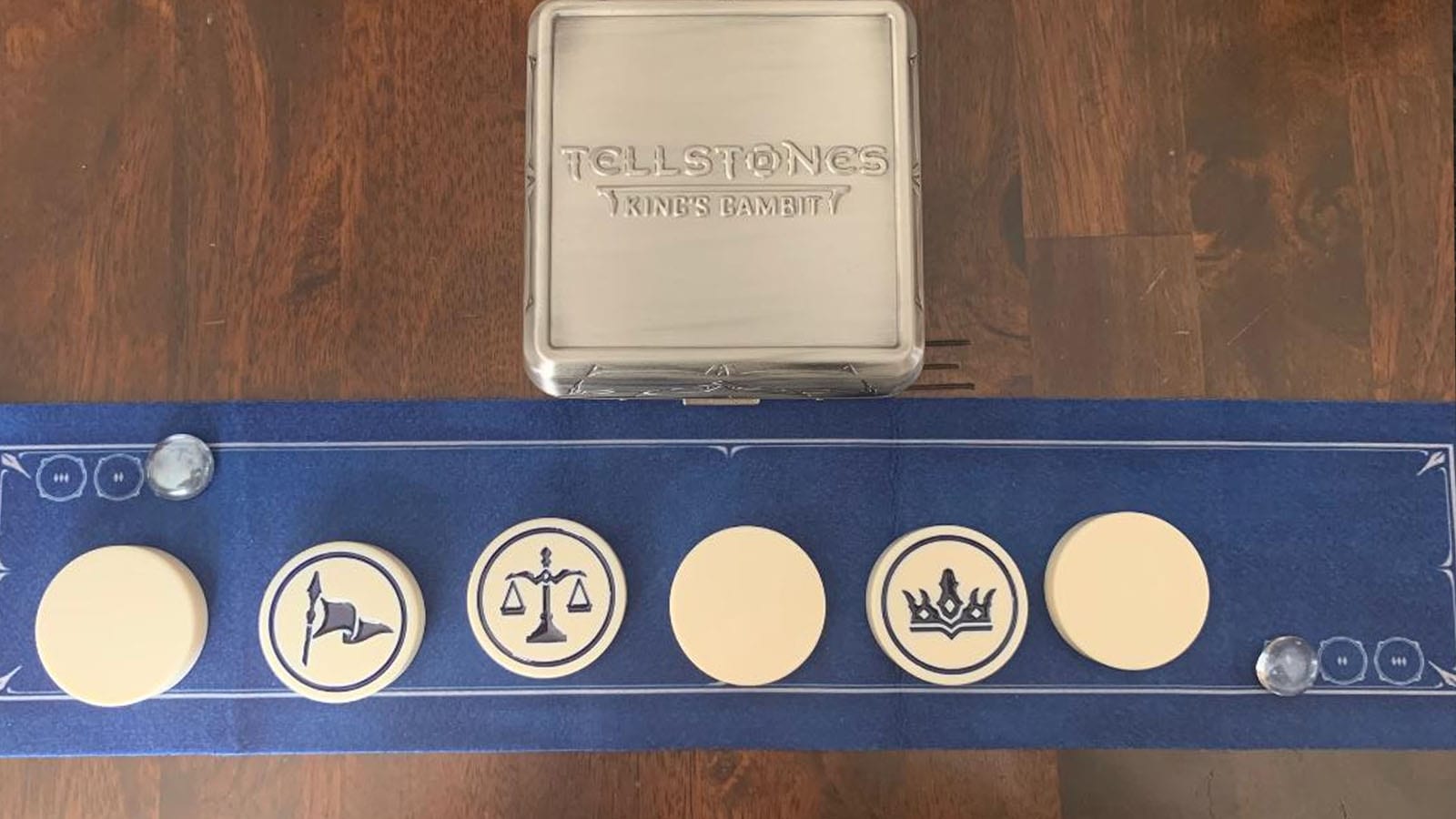 The next action is to challenge, and this is where players will score points to help them win. For a challenge action, a player will point to a face-down stone and tell the opponent “I challenge you to name this stone.” If the opponent can name the stone, they will get one point, but if they can’t, then the player who challenged gets one point. Whether they get the answer correct or not, the stone is flipped face-up and play passes to the next player. The final action is boast and is a true gamble. If you believe that you can name all of the face-down stones you can boast to your opponent that you know all of the hidden symbols. After taking this action, the opponent has three options. They can say “I believe you, have a point” which will give you one point and the turn will pass. They can say “I don’t believe you, prove it” which will force you to name and flip over every face-down stone correctly in any order you like. If you fail at even one stone, the opponent immediately wins the game regardless of the score. The last option for the opponent is for them to say “I don’t care, I know them too” and now you must choose to either give them a point or let them see if they can name them all. The game includes a reference card to help in case you forget what actions are available and to help with the options for boasting.

Tellstones: King’s Gambit is a very quick game to play. The set up can be finished in under a minute and once a game finishes, you will want to play again to try to either do better or defend your victory. At its base it is a memory game and while this might not be for everyone, the interesting part is that not only does it test your memory, but also your opponent’s. Has a piece been face down and swapped multiple times? Are you not sure what that piece is? Then this might be the piece to challenge your opponent to name because hopefully if you can’t name it then neither can they. This balance of moving all the pieces around and trying to remember them yourself is what makes the game. The added aspect of the bluff is a very interesting mechanic. Obviously, you won’t want to bluff when there are only a few pieces because if your opponent can name them all then they will win the game, but if your memory has been great, you can change the tides of the game and bring yourself back from losing to an instant win.

The components used for this game are down right jaw dropping for what the game is. When I first picked up the box I was surprised by the weight of such a small game. However, once I saw the metal box, I knew that the game was going to have the same quality that Riot Games is known for. The pressed metal box is beautiful and fun to open. Once open, the seven stones are a sturdy plastic that have some weight to them. They could have easily been lightweight plastic or even cardboard, but this gives moving the pieces an improved tactile experience. The playmat is a nice felt with some subtle designs that fits its purpose perfectly and the two transparent tokens are nice as well. It does feel slightly overproduced for the type of game but overall, the quality of the game is superb. 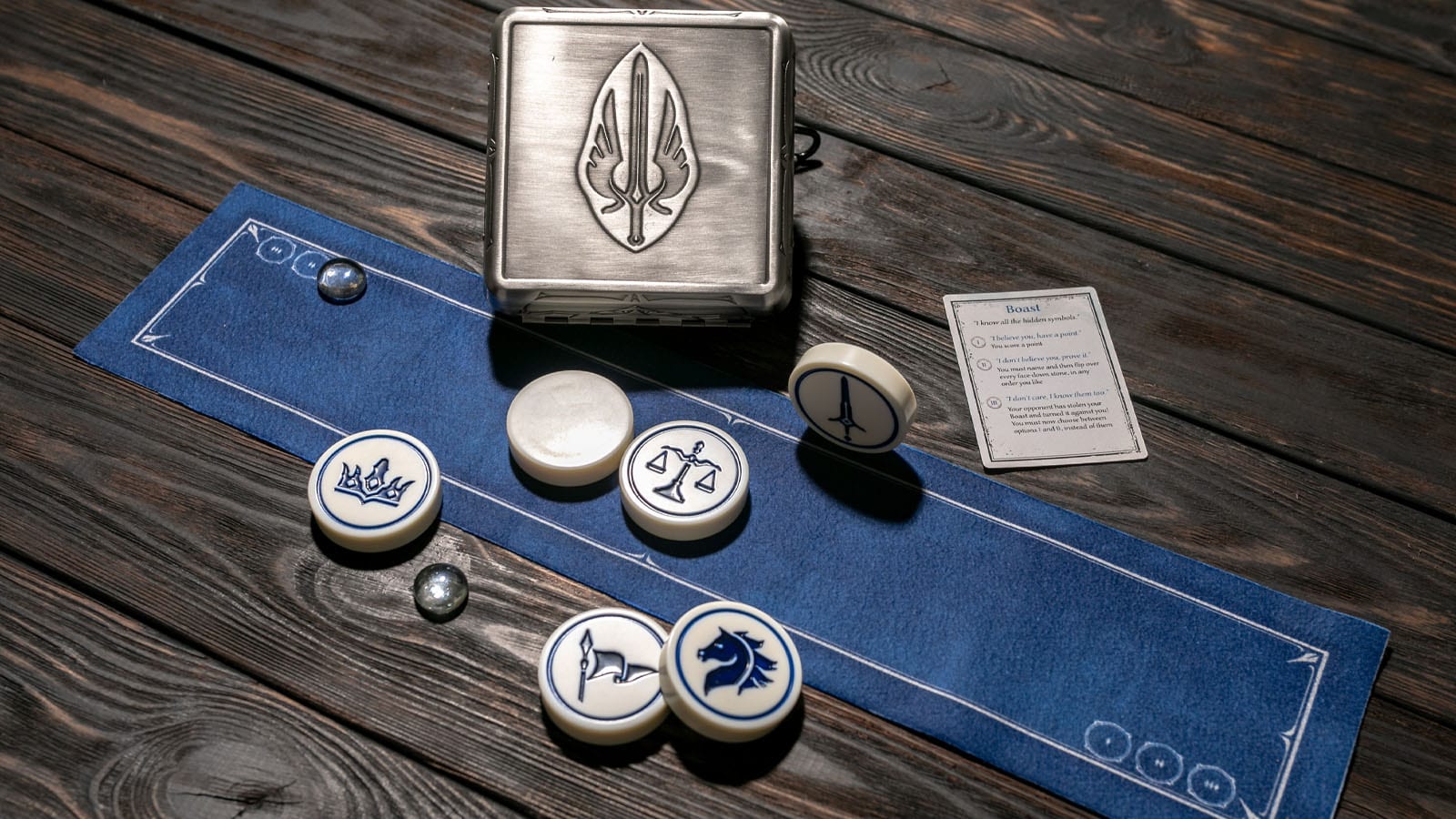 I enjoyed my time with Tellstones: King’s Gambit, and it is a game that is both easy to teach and perfect when you only have a few minutes to play a game. While my memory isn’t perfect, it was fun to try to keep track of some pieces and then get lost in the trash talking and realize I now know where nothing is. Because it does start with perfect information, it is possible for you to always remember where everything is, but as pieces move around, it becomes more unlikely. The strategy is deceptively simple and each new game you try has something different to see if you can trick your opponent into forgetting where the stones are. It is important to mention though that while I enjoyed this, memory games aren’t for everyone. Some people just don’t enjoy these types of games or like different types of games, but for what it is, this game was enjoyable.

One thing which seemed a little odd is the adding of the stones. At the start there are no stone on the Line so the first few turns are just the players placing stones on the Line. Even with just three or four stones, it is easy to remember where all the stones are. The real challenge happens when all the stones are there and you begin to manipulate them. I know that the order will change as you place the stones, but it seemed like we were just going through the motions at the start of every game before we actually got into the meat of the strategy. Another aspect which seemed like it could have taken the game to the final level is the playmat. The playmat is felt which folds in the box. This means that it doesn’t lay down flat. I’m surprised that with all the other upgrades they didn’t include a neoprene mat which would have really made the quality insane.

Tellstones: King’s Gambit is a simple strategy game that anyone can play. Its beautiful components enhances the experience even further. While not a game for everyone, it is still an enjoyable game for those looking to pit their memory against others.

A father of three with a degree in Mathematics, Jason has spent the last 4 years building his passion for tabletop games. With a collection of well over 300 games he spends a night each week with his family introducing them to new concepts and equipping them with problem-solving skills. Jason enjoys a large variety of games but some of his favorite include Architects of the West Kingdom, Blood Rage, and Terraforming Mars.
Related Articles: Tabletop, Tellstones: King's Gambit
Share
Tweet
Share
Submit