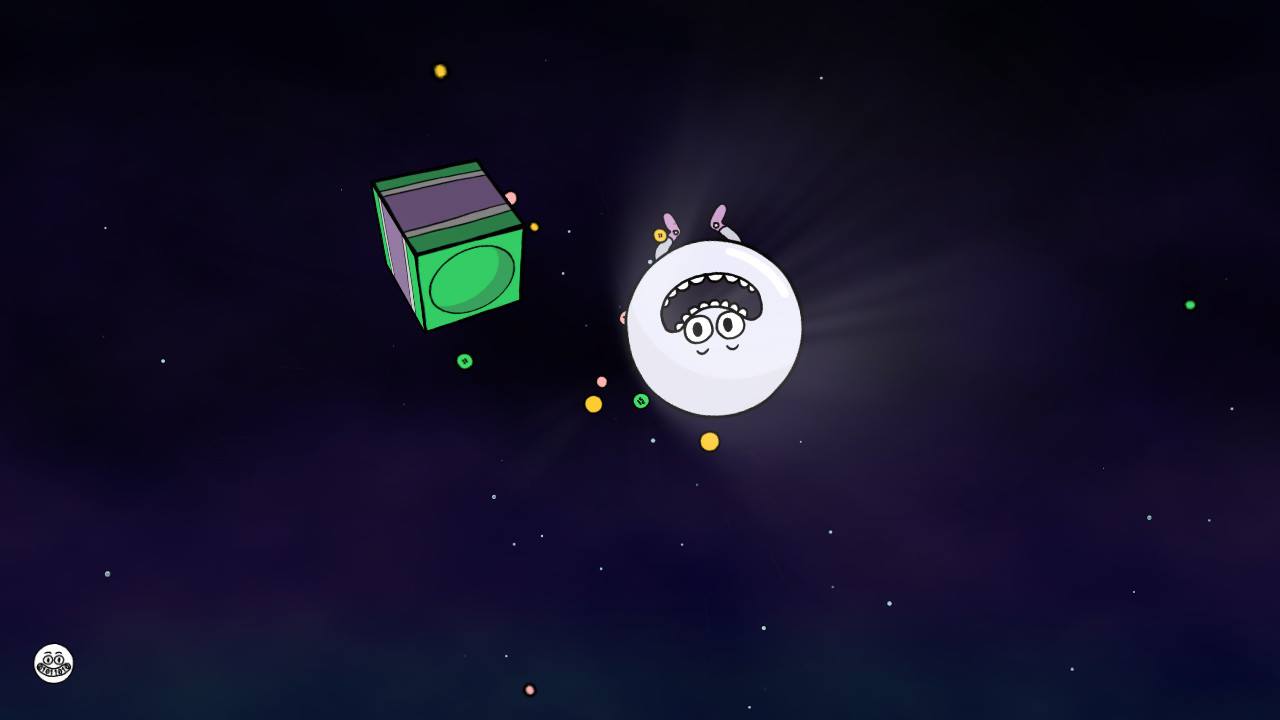 When I think about the sport of billiards, I think back to my grandparents’ house. Going into the basement and setting up the numbered balls in the wooden rack, the stale smell of basement and cigars lingering in the air as I took the blue chalk to the tip of the pool stick, followed by the cracking noise of the cue ball barreling into the now destroyed ball triangle. Pool Panic takes the traditional rules and ideas of billiards and flips it on its head in a way that’s both wacky and fun.

Pool Panic plays as a sports puzzler game, putting you in control of a cue ball whose face resembles that of a character from Rick and Morty. A talking block of chalk lays out the rules of the game, which are similar to that of pool, but adding its own little twist. Your cue ball has legs which allows you to move around the area of play or table as you please. You also have the option to take control of a floating pool stick to launch the cue ball at your desired target. The controls and angles of the game took some getting used to at first. You move the cue ball with the left analog stick, move the pool stick with the right analog stick, and shoot with ZR. The idea of moving your ball to set up the perfect shot paired with moving the pool stick (via the analog stick) felt difficult and at some points became frustrating. I had trouble with hitting the ball I wanted due to my angle changing slightly as I moved my finger to press the trigger to shoot. After playing a couple levels the controls became a little more comfortable, but I still had to compensate for my angles moving when pressing buttons.

The goal of the game is straightforward: knock the 8 ball or black ball into a hole to win/complete a table. There isn’t much story to the game as there is more of an overall task, which is to traverse through this weird ball world and complete all of the tables in it. The map in this game serves as the central hub where you control a simply drawn cue ball and move him through various themed areas looking to take on each table that area has to offer. The areas on the map range anywhere from a construction site to camping grounds to snowy mountain peaks. The map was a great feature in the game, that really showcased this weird and intriguing art style, along with being interactive. Certain areas require you to have completed a certain amount of tables or specific tables to advance. In the camping area I found a path blocked by animal balls, but was able to move them once I found a raccoon hat wearing ball to follow me in the overhead map and scare them away, thus opening up the world for more challenges.

Since there are so many different areas, this allows for each table you play to come with its own personality, making each level feel different regardless of the same overall goal. The area you play in affects the type of table you play on, and in most cases you won’t be playing on a table at all. The early levels of the game take place on a traditional pool table, but as you venture into the game more, the tables turn into fully interactive levels that include elements from the area you are in. Along with the tables changing, the balls in this game play a huge part in how you do on each table.

Each color ball in this game brings their own unique personality paired with a uniqueness to how they react to your cue ball character. There are basic red balls that for the most part stay where they are until hit; these act as the most traditional balls in the game. The 8 ball is technically the antagonist in the game and has many roles and abilities; in some levels the 8 ball stands still waiting to be hit, in others the 8 ball can be leading a marching band or operating an excavator. Other balls will move around the level on their own, skate or glide out of the way of your shots, or do a Mario-esque ground pound when hit that sends balls around it flying in every direction. These little details that made the balls different added a depth to the game that you don’t necessarily see in a sports inspired game, and really upped the difficulty, making the game more challenging.

The attention to detail that is brought to the game through the balls and areas only become more elevated once wearable items come into play. In some levels certain balls might be wearing a hat, and these hats can range anywhere from a band conductor hat to a pair of sunglasses. These items, when worn, affect the game and sometimes helps you in completing a level. In one level you have to put on a marching band conductor hat and lead the marching band into the hole to complete the level. These hats brought a smile to my face, and added some charm to my experience.

I mentioned earlier that this is a sports puzzler game, and the puzzle side comes in with a trophy system. Each table/level has four trophies for you to earn based on how you perform in that level. The four trophies include time, number of hits, getting all the balls in the hole, and not scratching (shooting the cue ball into the hole, or shooting the 8 ball into the hole before all the other balls are gone). Some trophies are much harder to get than others given the layout and the variety of balls in each level. The scratch and clear all balls trophy are fairly simple to earn, whereas the time and number of shots trophies take a lot of level restarts and luck to acquire.

One thing that bothered me about this game is the lack of direction or explanation in each level. Although this allowed me to figure things out on my own and have the sense of accomplishment when I did, I would have liked a little more direction in this game. At some points I had no idea what to do until I found myself furiously hitting the ball around the level until I accidentally did the right thing to progress further in the stage.

Adult Swim delivers a fresh and out of the box take on the classic game of billiards. I expect nothing but weirdness when playing or watching anything from Adult Swim, but I wasn’t expecting to enjoy this game as much as I did. If you are a fan of the network and other games they have produced, then you will love Pool Panic!

Pool Panic is an unexpected take on the classic game of pool. Combining the weird and silliness of Adult Swim with a sports puzzler type game makes for fun and enjoyable gameplay. The art style and attention to detail work nicely, and adds an unexpected depth to this wacky game!

From Southern New Jersey, Shaun has always been a huge fan of video games as well as nerd, geek, and pop culture. No matter the topic of conversation, Shaun can always find a way to slip in a movie or TV quote to get a laugh. When he is not playing games or watching shows, Shaun works as a substitute teacher during the day and as a bartender at a local brewery on nights and weekends.
Related Articles: Pool Panic
Share
Tweet
Share
Submit