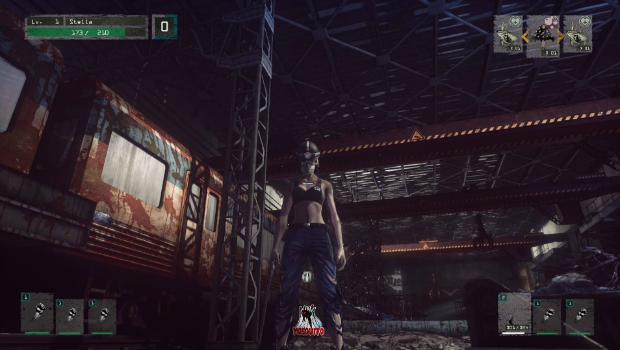 Death is scary, but it would be a bit less so if I knew I got to come back and beat up my own reanimated corpse after my painful and bloody death. So perhaps Let it Die, a surprisingly fantastic Free-to-Play on the PlayStation 4, has the right idea for what death should be. The better idea the game has is making a fully fledged gaming experience into a freemium title, though that’s honestly more scary than climbing the death tower in the game itself.

Let it Die is certainly a frightening experience, but it is also perhaps the best ever Free-to-Play game made available on the PlayStation market. Unique, funny, and tough but fair, Let it Die is a fast-paced kill fest that only slightly tempts you to open up your wallet to indulge in a little ease.

In Let it Die, you are a gamer in the Hated Arcade, chilling out with a warped Grim Reaper and some basement dwellers. You’re invited to play the Deathdrive 128, which gets you into the game proper.

There, you take the form of what I like to call a “reanimated battle corpse”, some sort of sentient bio-mechanical warrior who has a single task: kill your way to the top of the Tower of Barbs. The aforementioned tower, an enigmatic hellish structure, houses undead murderous psychopaths, numerous beasts, delicious (and sometimes dangerous) mushrooms, and a treasure unseen, but rumored to be a large fortune.

You are aided, and also egged on, by Uncle Death, a psychedelic skateboarding reaper with a strange accent and a very blaśe attitude towards the whole tower experience. His accent is initially terrible and incomprehensible, but soon becomes just another entertaining quirk. Let it Die gets high marks for Uncle Death’s charming personality, as well as the other characters you meet, including a fellow gaming obsessed arcade enthusiast, a pole dancing mushroom cook, and a floating brain with tires that jacks into your body and lets you level up.

For Let it Die, which does have very nice gameplay execution, the real charm is in the characters, dialogue, and general tone and vibe throughout. There is a dark humor pervasive in the words, weapons, and interactions with enemies and friends alike. Absurdist, artful, gloomy and violent, every moment with the colorful cast feels fun and acts as a break in the otherwise dystopian nightmare run the game presents.

You start Let it Die with no weapons or equipment. In a lobby area there are a few options for you to buy, sell, or store items, and collect gifts. Then you go into the tower proper, where enemies are few but strong. Battles are erratic, varied greatly from enemy to enemy, and intense, meaning you can’t just one shot everything in sight. The enemies are undead but not zombie-like, instead acting more like deranged murderers hell bent on the kill. The battle speed is very immersive and the almost duel like quality of the fight enhances the urgency and fear. I always felt on edge in a good way. The game captures the difficulty and general hopelessness of an arcade classic perfectly.

You find items for wearing, eating, throwing, hitting and shooting as you progress, but items equipped lose durability fairly quickly. This seems to enhance difficulty (and it does seem fitting), but knowing I can buy equipment and currency in the PlayStation store makes me think ulterior motives are afoot as well. Either way, items degrade a bit too quickly.

The game does get a little hard to navigate at times, but nothing beyond a slight nuisance at worst. The most detrimental functions seem to be with gunplay, where aiming is a bit off at times and the guns seem to not trigger at certain times, a glitch that can turn deadly. It doesn’t feel so off that  you can’t use a gun, but you’ll find yourself preferring a melee weapon often times.

Perhaps the most intriguing feature in Let it Die is “Haterification”, which happens when you die in the tower without choosing to pay a “Death Metal”, the game’s more premium currency, to resurrect yourself. The character is lost to the tower and reanimated as an enemy that you can then track down and kill as a different character. Other dead players will also appear in the tower as “Haters” and killing one yields a third special currency used to boost character abilities.

One thing I’ve noticed is the game has a set pattern of enemies and there are few surprises after the first few runs through an area. The addition of the Haters makes for a bit of randomness, and also acts as a boss battle of sorts because the player characters are so much stronger than the enemies for the most part. You will also see haters killing other psychos, so they do assist in a way.

Overall the game is very playable and most enjoyable without spending a single penny. However, in various ways the game does allow those with loose income to indulge in a little ease or second chances. Express Passes allow for certain perks and free travel in the tower’s premium elevator, but cost a lot of scratch.

The game is completely playable and without paying, it’s just much, much more difficult. It’s nothing bad here, but it does scare me for what it may become, a world of free but highly transactional top-tier games replacing a buy once model. While I’d have happily spent $60 on this without all the pay to play aspects, I could easy spend $80 in micro-transactions over the course of my time in game, and I would probably fall on the low end on that metric.

As it is, Let it Die just shines as a fun and fair free title that absolutely shatters my own notions of what a free-to-play title will be. The game’s use of sound and music to create very creepy sound collages is only enhanced by the presence of smooth jazz and acidic grooves in various intervals. The game also blends a dark, horrid nightmare world with intense psychedelia and colorful madness. The intense attention to aesthetics given by the Grasshopper Manufacture team makes every little menu, tutorial, cutscene and game session feel wonderfully memorable and immersing.

Let it Die is hacky, slashy, and sometimes a little spendy, but with a game like this you can’t turn away. A deliberate and intense action murder simulator rife with humor, morbidity, and tons of style, Let it Die overcomes a few flaws to be a top notch and surprisingly great title. As it is free, there is absolutely no reason not to get it on the action.

Patrick Rost has been with Gaming Trend since 2013. At first focused on sports coverage, Patrick has gone on to cover a wide range of games and other products for the website. Outside of Gaming Trend, Patrick writes and records music, grinds perpetually in Elder Scrolls Online (PS4), and lives day to day with his two dogs, Bob and Stella.
Related Articles: Let It Die
Share
Tweet
Share
Submit