“It is absolutely necessary, for the peace and safety of mankind, that some of earth’s dark, dead corners and unplumbed depths be let alone; lest sleeping abnormalities wake to resurgent life, and blasphemously surviving nightmares squirm and splash out of their black lairs to newer and wider conquests.”
― H.P. Lovecraft, At the Mountains of Madness

Sr. Editor Travis Northup already did a deep dive into The Sinking City on the Xbox One. In his review he praised Frogwares for their investigative mechanics, but jabbed them in the gills for numerous issues including memory leaks, character placements, pop-in, and other hiccups. He also praised the game for its worldbuilding, but noted that there were a number of low-resolution textures. In short, most of his complaints with the game were on the technical side. Could this surprise upgrade release on the PlayStation 5 be what the game needed to realize the mountains of potential present?

Before we get too far into the comparison with the PlayStation 5 version, the first question owners of the PlayStation 4 version will ask is whether this is a free upgrade. Unfortunately, the answer is no, and not for the reason you might think. Frogwares, the developer, and Focus Home, the publisher when the game was released, engaged in a bit of a legal spat whereby they removed the game from all storefronts, leaving Frogwares out in the cold on properties that they had created. An unfortunate situation, Frogwares is left without an avenue to provide the upgrade path. Still, at a reduced price (and 30% additional off for PS+ members for the next two weeks) and this many improvements, it’s time to revisit Oakmont and see what new horrors are in store.

I’m not going to rehash Travis’s in-depth review, but suffice it to say that this game is a detective puzzler with a small pinch of combat thrown in to break things up. To that point, moving to PlayStation 5 isn’t going to add any additional depth to the combat, but a fresh set of hardware can mean a world of difference for the game, graphically.

The PlayStation 5 version of the game runs at 4K resolution, and maintains 60 FPS for the most part. Occasional hiccups don’t seem to be tied to any particular action, or the number of creatures or people on the screen, but they are infrequent enough to not be a concern. While the game doesn’t feature loading screens of any kind, the added speed of the m.2 drive in the PlayStation 5 means that when the game does load, it does so at a blistering speed. When you unlock the ability to fast travel, or when loading from the main screen, the sequence is roughly 4 seconds, down from well over a minute.

While there are some rumble features for the DualSense, they are very subtle and don’t feel like much of an upgrade. The gun trigger has a harder pull at the halfway point, but all of it is just too subtle. What does feel new is a whole lot of texture improvements, and a fresh feature exclusive to the platform.

The team at Frogwares has retouched The Sinking City nearly across the board. Many textures that were somewhat muddy are now crisp and detailed. Character faces are still angular and sharp, which is more of an aesthetic choice than a technical limitation. When you do run into the strange and supernatural, such as the Innsmouthers, they are dramatically improved. Previously the loose skin and milky fish eyes looked fairly matte and painted in. On the PlayStation 5 those same eyes resemble the clearish yellow of a real fish eye, with the skin looking more sallow and gross. It’s not a night and day improvement, but there was obviously a lot of effort placed here. That said, the pre-rendered cutscenes remain in their original framerate and resolution, so they do stick out from the in-game graphics. They don’t look bad, but they no longer match.

The PlayStation 5 supports a feature called “Activities”. These let you “jump in” to a specific area of the game so you can tackle a specific task. Some games use this as a sort of “quick resume” function, and it works that way here for the most part. Each of the major story beats get a “card” that shows you how much of that portion you’ve completed. These are often tied to achievements or major moments in the game. Since the game is a sem-open world, it works well, other than having to watch the boot up title cards every time. 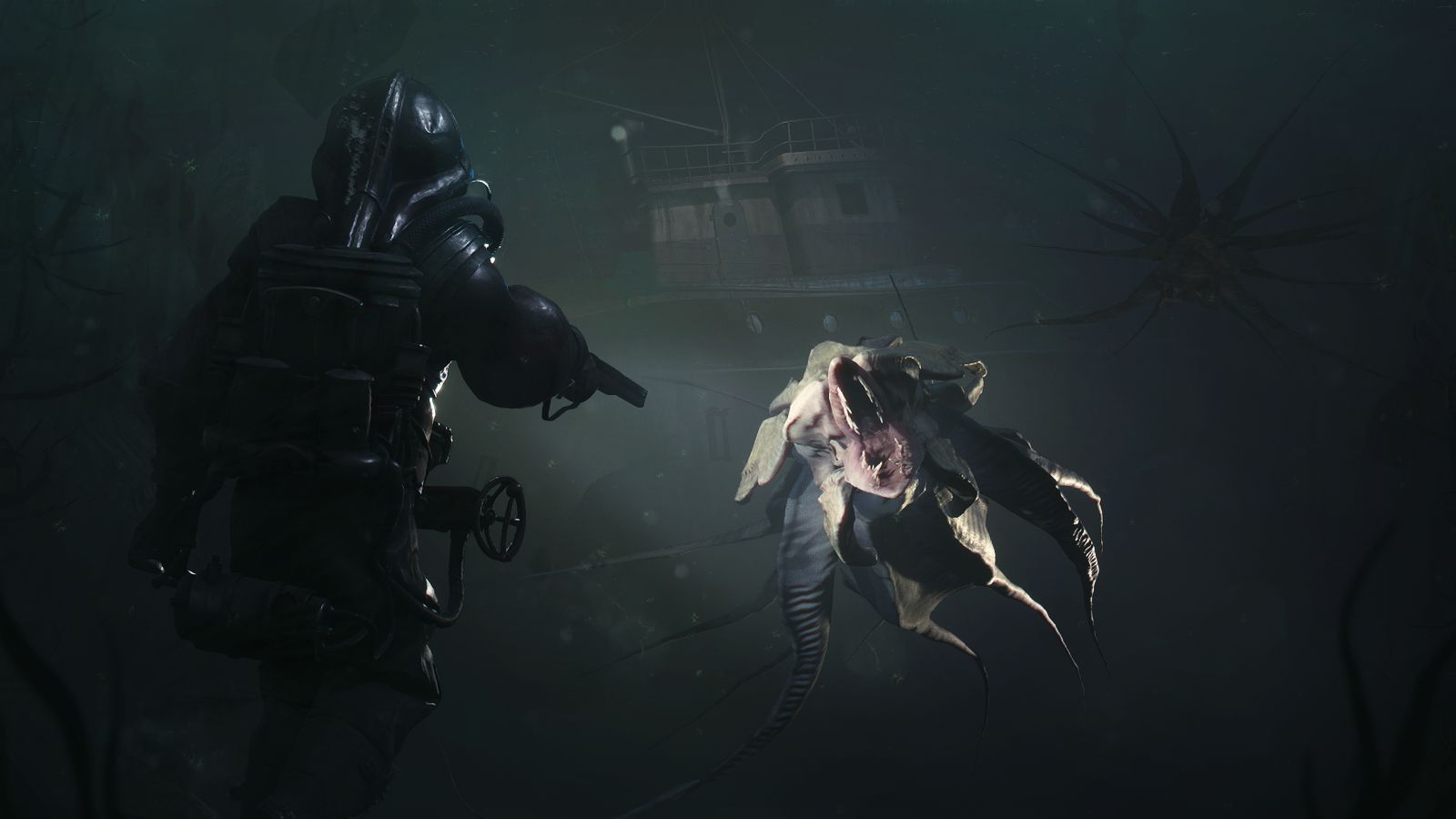 While the city of Oakmont is filthy, I’m glad to say that a great many of the distracting bugs with the PC and PS4 version of the game are cleaned up. That said, there are still quite a few mipmapping hiccups, lighting flickers, and often hilarious havok bugs. Character eyes will occasionally spin like they are in a slot machine, clothing wiggles and clips through objects, and every once in a while a corpse will fling themselves around like a deflating balloon. You do start to lose your sanity as a course of the story, so you can chalk it up to that, I suppose.

There’s a lot to like in The Sinking City on PlayStation 5. With updated textures, 4K/60 FPS support, faster loading times, and activities support, it’s a solid detective story. While the combat may be shallow, and it has enough havok bugs to make a Deep One scared, it represents some of the best work Frogwares Studio has made. If you are an H.P. Lovecraft fan, don’t let this one sail past you.

Ron Burke is the Editor in Chief for Gaming Trend. Currently living in Fort Worth, Texas, Ron is an old-school gamer who enjoys CRPGs, action/adventure, platformers, music games, and has recently gotten into tabletop gaming. Ron is also a fourth degree black belt, with a Master's rank in Matsumura Seito Shōrin-ryū, Moo Duk Kwan Tang Soo Do, Universal Tang Soo Do Alliance, and International Tang Soo Do Federation. He also holds ranks in several other styles in his search to be a well-rounded fighter. Ron has been married to Gaming Trend Editor, Laura Burke, for 21 years. They have three dogs - Pazuzu (Irish Terrier), Atë, and Calliope (both Australian Kelpie/Pit Bull mixes).
Related Articles: Let's Play, The Sinking City
Share
Tweet
Share
Submit