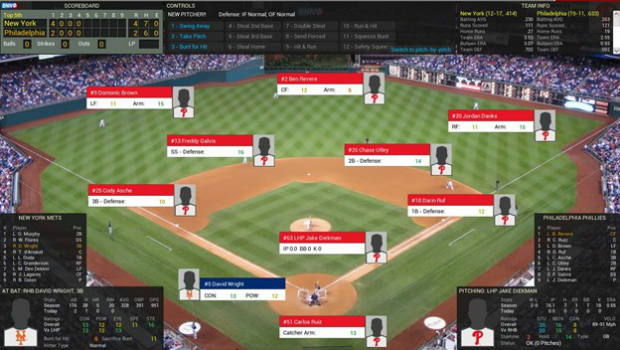 Simple is sweet.  There is something to be said for the minimal, the sleek, the clean, and the brief.  Incredible simplicity is also accompanied by incredible rudimentary gameplay and the basic absence of all action.  This experience, the world of sports simulation, is not one for everyone.  If you must, brave sports nerd, then you’ll need look no further thant Out of the Park Baseball 17.

With all the other titles in the genre that, can present a nearly perfect gaming experience almost every single time, OOTP Baseball 17 bypasses them all by a mile, and presents the cleanest, easiest to learn, most accurate and impressive of all the sports simulation experiences.

OOTP Baseball 17 places you into the chair of the general manager, team manager, or both, of a professional baseball team and tasks you with building, sustaining, maintaining and improving a baseball squad.  From the players and the lineups, to the strategies both overall and in-game, pitch-by-pitch, you are able to make your own personal baseball philosophy a reality.  Good or bad, you’ll finally know just how much you could potentially handle running a baseball franchise.

OOTP Baseball has always been a great player in this gaming world.  Building on an already great product has given them a leg up in the world of gaming simulation, and that is nowhere more evident than in the laser accurate simulations that the game can provide.  For this, I went back and checked the stats for the Chicago Orphans in the year 1905, and then I ran a simulation of that year as the Orphans.  I made a few changes to the team, but overall left things pretty much the way there were in the real-world.

The stats came out incredibly close to what they were in the real world, and even with the insight  I had into what would work and what wouldn’t, it was impossible for me to overcome the reality of my team’s limitations in just one year.  Teams that did well in the real-world did well in this simulation, and everything worked the way you’d expect it to, but with all the slight variances in game-to-game action, overall records, and stats showing the actual work that went into the sims.  Running that sim over and over yielded similar, but always slightly varied, results.

OOTP Baseball 17 offers a plethora of options for your simulating fantasy, where you can play single game, tournament, or full real-world seasons as the team of your choice.  You can do this for all teams going back historically to the late 1800’s and the origins of baseball.  The game manages to even capture the real-world arc of events with an option that takes away player management from you and replaces it with the actual player signings and trades that happened in the real world.

The menus, options, and numbers are easy to read, navigate, and modify.  Everything is intuitive, and side and top menus make for multiple places to get to and fro.  Most everything is a link that can take you to the team, league, or a specific player’s page, and the outcome is a fluid and free system of navigation that you’ll never be lost or confused in.

Game display is typically the least important part of a simulation game, but OOTP Baseball 17 again has the best in the business, with three distinct and stylish broadcast modes while performing an in-game simulation.  Two of them are 2D and mostly just display information as the game goes along.  A third is a full-3D animated baseball broadcast.  The players look like little Sorry pieces and there is a nice ball-flight animation as well.  It isn’t really pretty or even that impressive, but it gets the job done in a visually interesting fashion that is top notch for the style of game.

The game is fully customizable, from the team’s players, logos, and leagues, both in the United States and around the world.  The display of the games, the play-by-play, and even certain aspects of the menus can customized.  OOTP Baseball boasts a license with the MLB, MiLB, and the MLB Players Association, so they are able to use all of the real world player names, team names, locations, and logos in their game.  This is a huge advantage over the other games in these genre, that are almost never able to have this type of support from the real-world leagues themselves.

Out of the Park Baseball 17

Out of the Park Baseball 17 is a culmination of hard work over several years that has resulted in a perfect sports simulation experience. A game with simulations that are accurate and hyper realistic, full of easy to use menus and navigation, boasting an interesting and ever improving game display, and the full glut of game customization nails every single aspect of what players desire with sports sim titles. Simply perfect, this game is the one you’ll want to pick up first if you’re itching to crunch some earned run average numbers.

Patrick Rost has been with Gaming Trend since 2013. At first focused on sports coverage, Patrick has gone on to cover a wide range of games and other products for the website. Outside of Gaming Trend, Patrick writes and records music, grinds perpetually in Elder Scrolls Online (PS4), and lives day to day with his two dogs, Bob and Stella.
Related Articles: Out of the Park Baseball 17
Share
Tweet
Share
Submit