Black Skylands is a lot of things. Farming simulator, resource juggler, and RPG are all fitting descriptions as it touches on all of these things. What sets it apart from games of these genres is that it does it from an open world setting…in the sky. As the name of the game suggests, the world of Aspya tells the story of a world of floating islands, and the people who have settled on them to claim their home. You play Eva, a member of the Earners family, who finds herself suddenly at the center of a war in the sky. But there are often more enemies than just the ones we see…

The inciting event of Black Skylands is a complete accident. While researching the mysterious creatures that live in the impenetrable veil of clouds, your father managed to capture one of them — a crab-like creature with massive pincers. Releasing it from its cage, he tells everyone to remain calm as this creature is a herbivore, is docile, and is also sedated. Naturally the moment the creature reaches out towards one of them, the trigger-happy Commander lets loose several rounds, killing the creature. Unfortunately, a wild shot hits the leader of a group called The Falcons, shearing his arm off at the elbow. Fast forward seven years and the Falcons have turned into what seem to be sky pirates — a fact demonstrated by the “accidental” shelling of the Fathership, killing dozens of people. There’s more to this story, for sure, but it’s hard to want to hear it when you are actively shuttling coffins of dead friends and relatives off the edge of your home ship. What are the motivations of the Falcons? Why have they systematically taken over all of the nearby islands? Is it greed, or a misguided sense of “helping” others through force? What about the creatures of the Swarm? Are they really as dangerous as they seem to be? Or is this all one big misunderstanding? 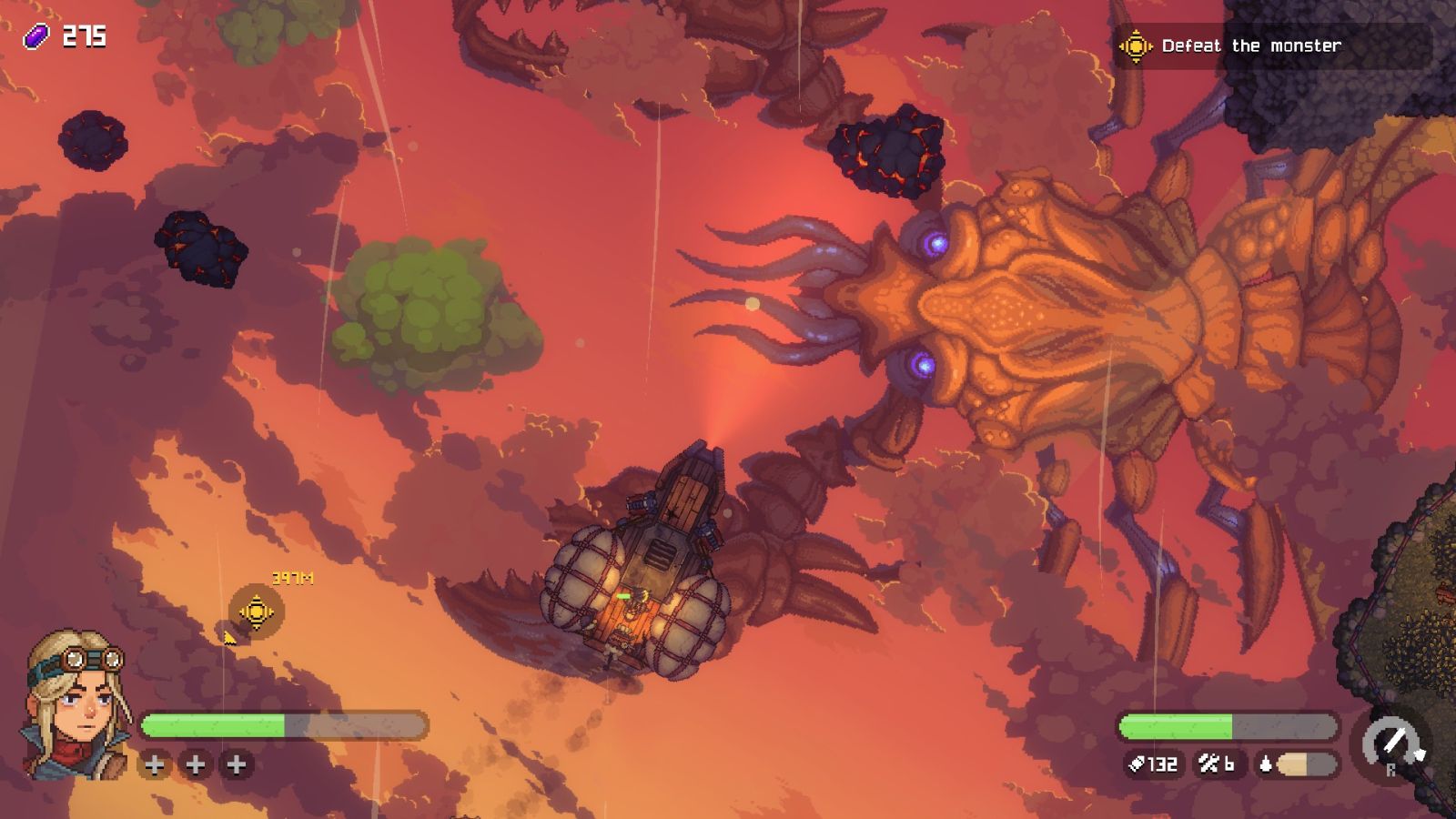 Combat in Black Skylands takes place on land and in the air. Your airship has two guns that can be faced in a 45 degree arch in three positions from forward to rear, allowing you to perform a triple burst from either side, or both. Ammo is finite and you’ll have to buy more at a store, and your cannons have a maximum heat from firing before they reset, so a calm and measured approach is wise. Later on you’ll be able to upgrade your arsenal (more on that later) so don’t take those cannons as canon.

On land, you are armed early on with a pistol, shotgun, and light submachine gun. You also have a grappling hook that doubles as both a melee weapon and a means of traversal. Rolling keeps you safe from projectiles, but the rest is up to your timing and application of force. Ammunition is finite, but finishing a foe with a melee attack grants you a little bit of ammo, as does breaking the various boxes strewn about. If you’ve played games like Enter the Gungeon or Hotline Miami you’ve got the right idea, though you also have a well of hitpoints, so it’s not quite as punishing. Your foes are similarly armed, so anything you can do, they can do in droves. 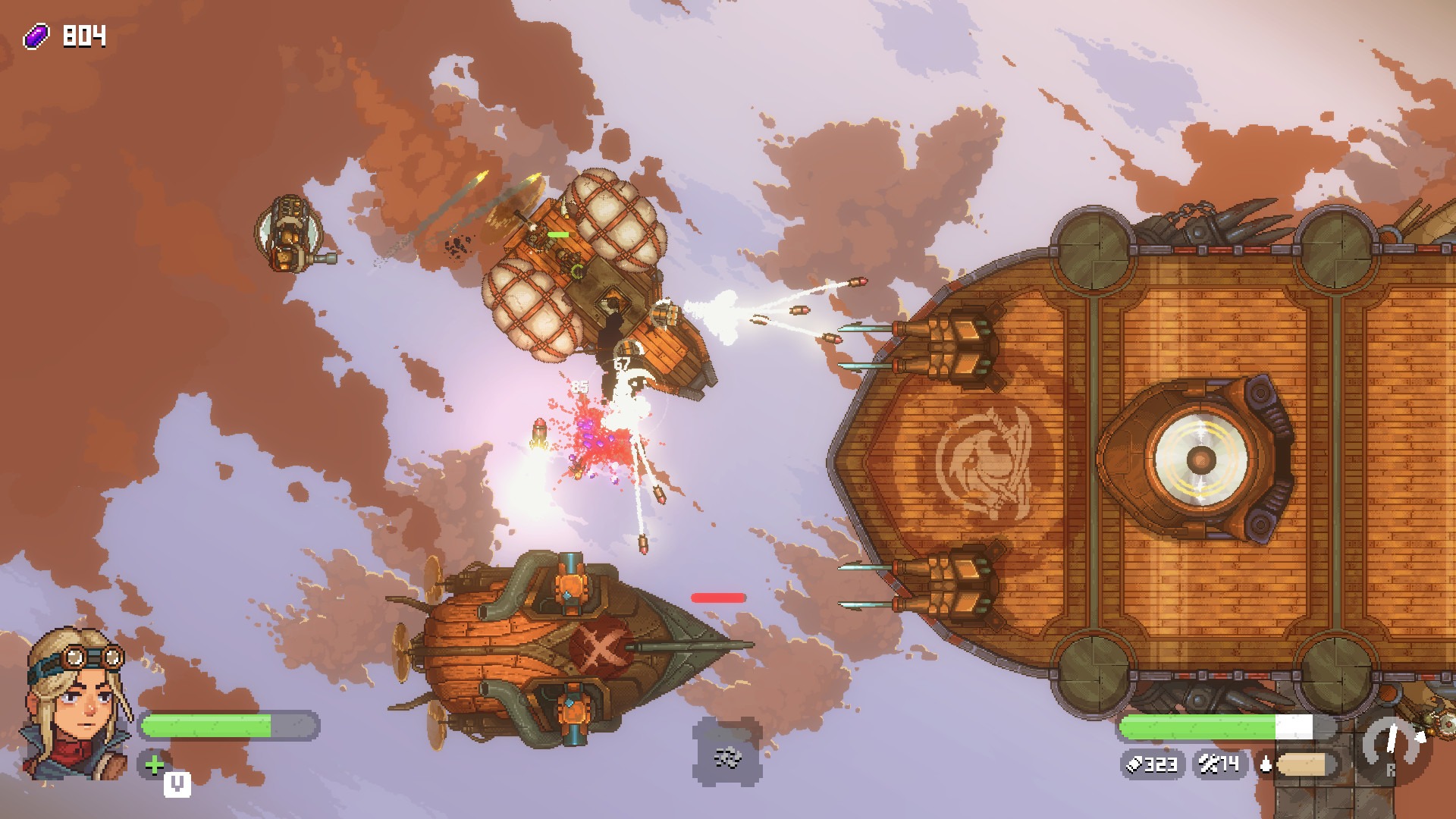 There are multiple weapons available to you in Black Skylands, each with four attachments (mods) you can swap out to modify their damage, reload time, and fire rate. Similarly, there are pieces of armor, belts, bags, and boots to build and equip that can improve armor, movement speed, health, and more. There are also upgrades that can give you a flashlight, additional damage with your grappling hook, and other similar utilities. Each of these have a requirement of resources, as well as a need to have a certain amount of rescued villagers able to work on it for you. How do you get more worker bees? Liberating islands. 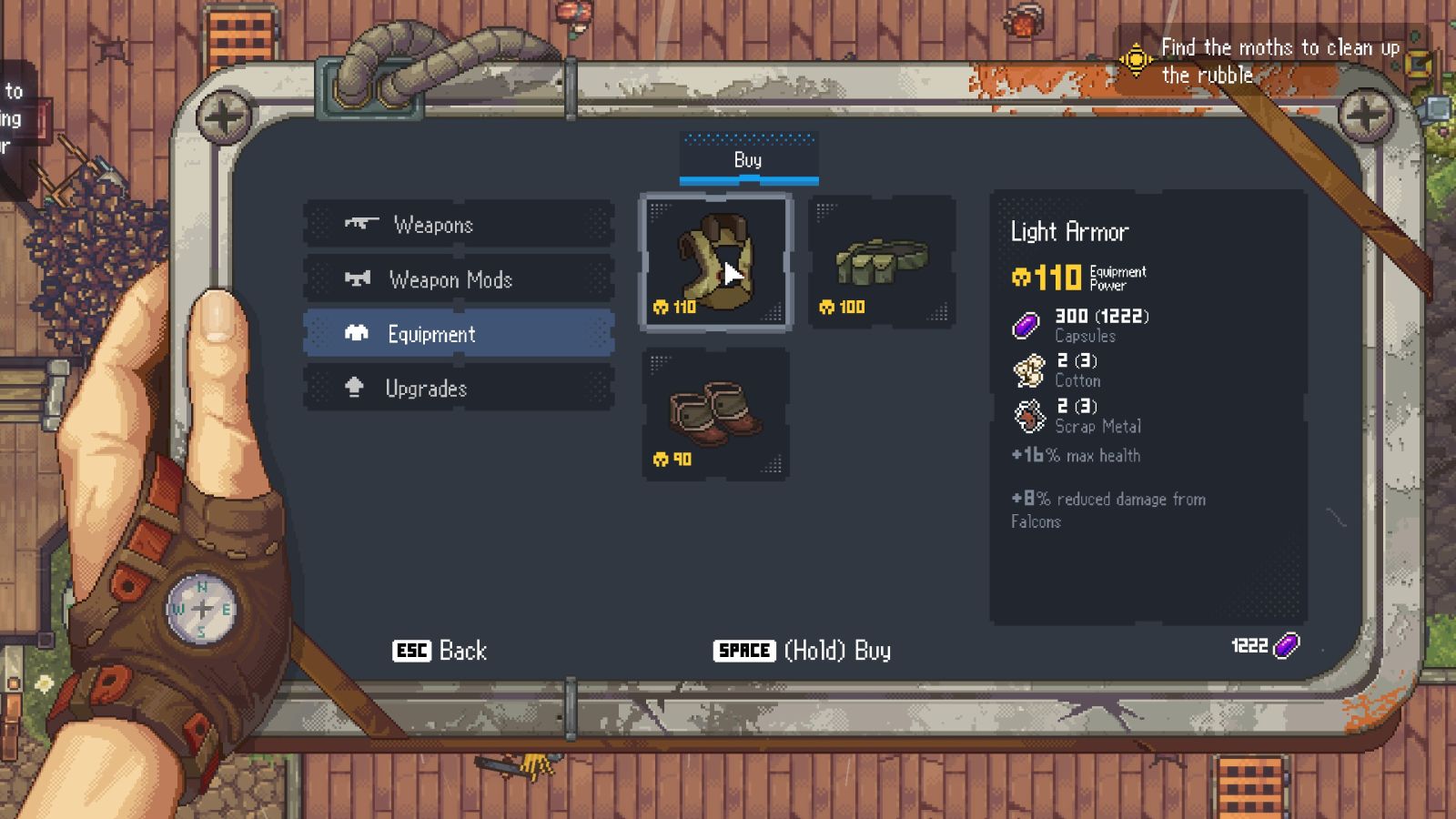 Heading to any island you’ll be presented with a numeric value that gives you an idea of how powerful the Falcons are that have it under siege. Taking them all out, including any patrol ships swirling around the island itself, will free the island, giving you a certain amount of citizens back into the fold. Liberating islands is one thing, holding them is another.

The Falcons are constantly trying to encroach back into their previously-held islands to retake them. You’ll be given a small window of time to head there and stop them before they can retake it. Often they show up in force, so holding an island can be significantly harder than taking it in the first place. If you lose an island, you lose the unused population that were otherwise handling your upgrades. You may have to deactivate an upgrade or re-take that island to turn it back on. That should be incentive enough to keep those islands on your side.

As your influence grows, you’ll gain access to new research trees and resources, as well as additional tiers of modifications to grow your power. And you are going to need it — Black Skylands is not an easy game.

Not unlike many other tinyBuild titles, resource management is a key part of the gameplay loop. You’ll need wood, raw copper, coal, and other minerals that you’ll harvest in the overworld. You’ll also have to farm things like cotton and flax, or make combinations to create ingots or billets. At the launch of Early Access there are five building types — a garden, armory, factory, ship workshop, and bar, and most have upgrades that let you access higher tiers of production. Gardens give way to ranches, and a laboratory will grant you access to all sorts of relics. There’s a world of goodies to discover, and that’s half the fun, so I won’t ruin it here. 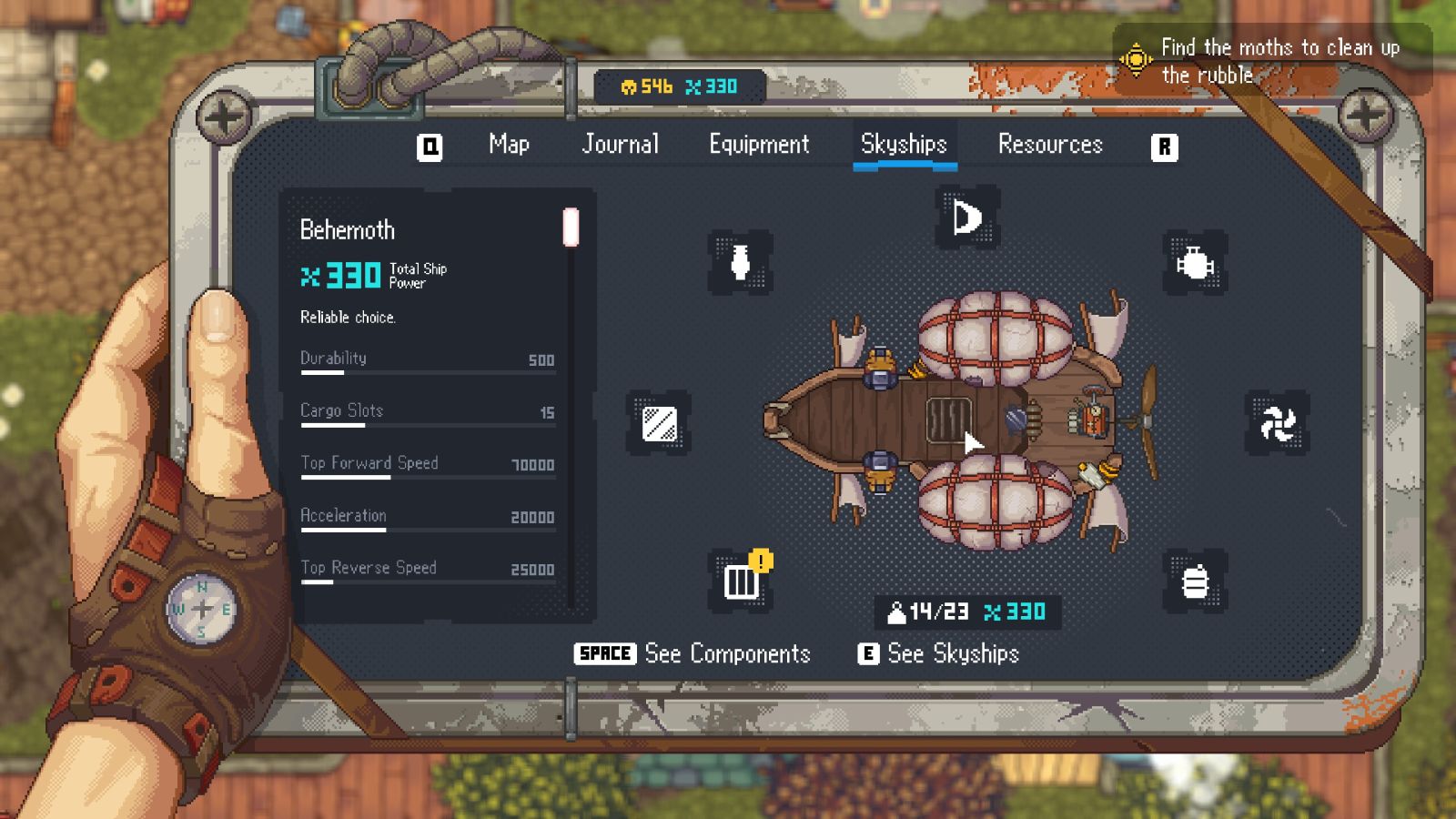 When you’ve gotten your town whipped into shape, you’ll have the resources to build and upgrade ships. There are multiple ships, each with their own strengths, weaknesses, and special abilities. In addition, there are nearly a dozen part upgrades that can give you more storage on your ship, better maneuverability, better firepower, and more. I’ve just scratched the surface of this, but I can’t wait to see this expand.

While Black Skylands is Early Access, it already feels like it has a very clear direction, and a highly entertaining gameplay loop. The developers are very eager to hear feedback to help their game grow into something phenomenal, and their excitement is palpable. Thousands of games vie for your attention every year, and after playing Black Skylands for a few hours, I’m glad to say that this game should be on your radar.

Black Skylands is entering Early Access on July 8th on PC, and is available on Steam.