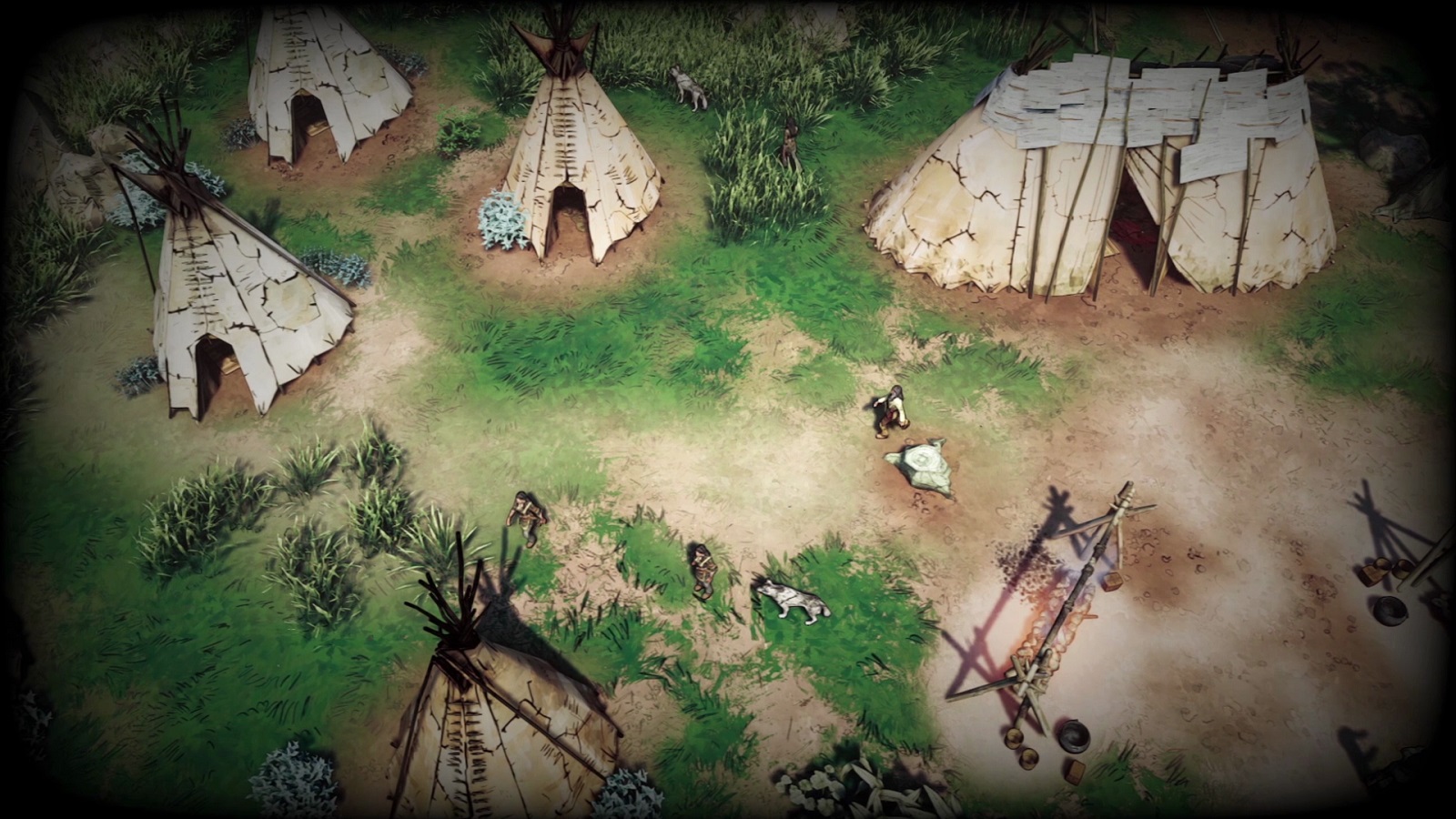 WolfEye Studios is no stranger to the immersion sim; the company is filled with ex-Arkane employees that lent their expertise and obvious passion for the genre to Weird West. Unsurprisingly, this fledgling indie studio is a few dollars, and developers, shy of being able to produce a Dishonored of their own—though unsurprisingly again, Weird West’s excellent design pushes it straight up my list of most anticipated games for 2022. In the few hours I had to acquaint myself with the game and its many systems, I was only able to scratch the surface of what’s possible in this Wild West fantasy. There were so many choices to make and resulting predicaments to shoot my way out of.

The world of Weird West is vibrant in both senses of the word; its striking visuals and the myriad interactions to be had within it never cease to impress. The art draws influence from the aesthetics of western comics, from its bold lines to its aggressive colors—something that bleeds into its menus that are just oozing with this signature style. Throw in an excellent soundtrack and the resulting aesthetics are unrivaled. Despite this, Weird West is not a flashy game. Everything is implemented with a shocking amount of restraint. Instead of vomiting text to satisfy lore-hungry players, the game kept conversations succinct and only ever fed me the necessary details—for example. Every design decision is well considered and every system contributes to a cohesive whole worth more than the sum of its parts. 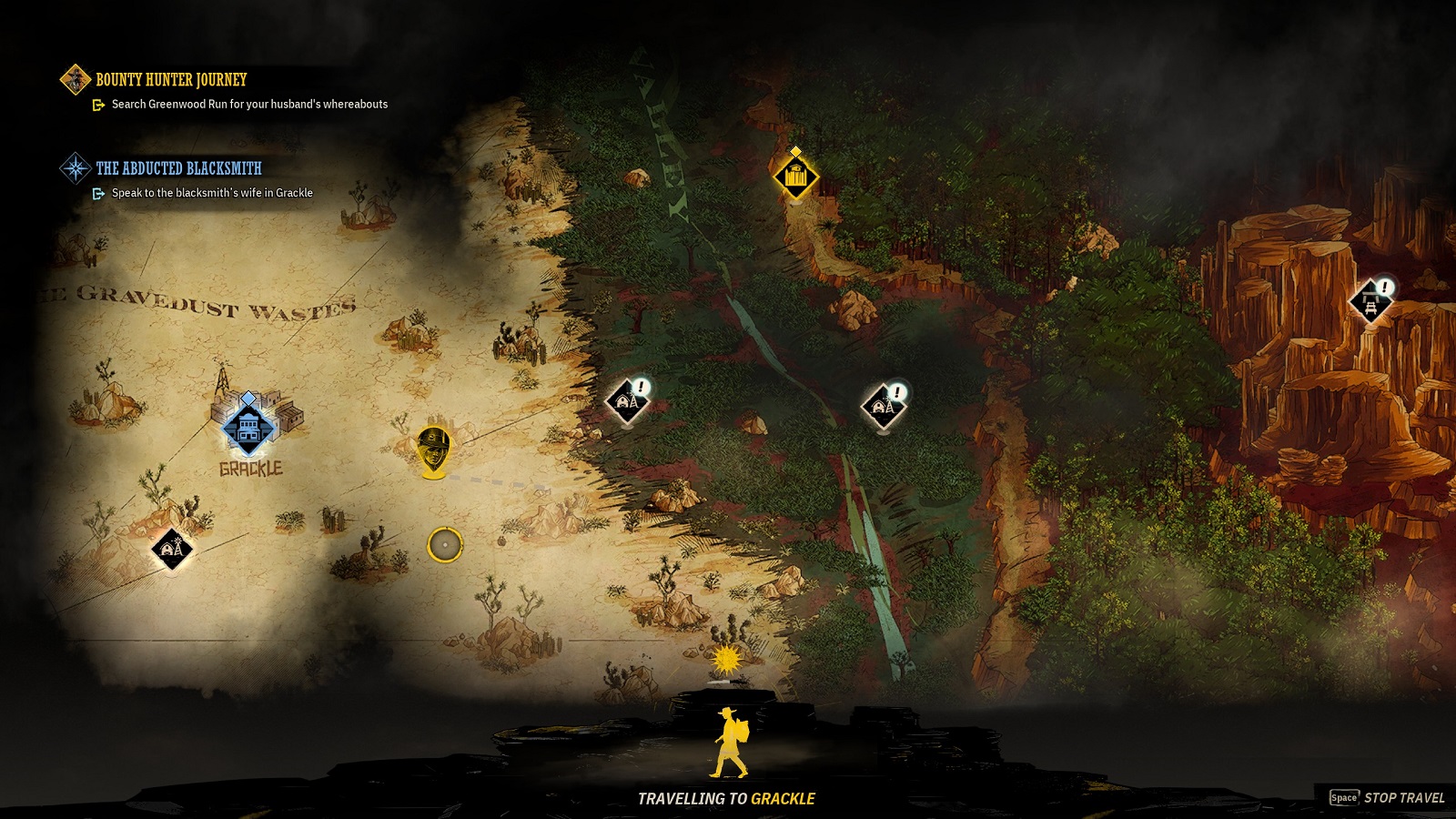 On my way to the next bloodba—I mean, adventure.

I spent my time trekking across the fantasy frontier as Jane Bell, one of five playable characters. With my husband kidnapped and my son lying face down in a pool of his own blood, the only logical course of action was to shake the dirt out of my crusty six-shooter and hit the open trail. That journey lasted roughly four hours—it would have certainly been more had I stopped to do the rest of the side content. What I experienced on my way to retrieve my MacGuffin husband got me hopelessly excited for the four future character stories to come, all undoubtedly filled with dead loved ones and revenge-fueled murder sprees.

Person, animal, monster—no one was safe from a lethal lead injection courtesy of me and my trigger-happy posse. One of the few things that stayed our hands was Weird West’s reputation system, which presents the product of hundreds of nuanced decisions as a number value. Every significant action, whether I saved someone’s life, took it, or turned it around, added or subtracted from the counter. Positive and negative reputations affect Jane’s relationships with the world and its many inhabitants; robbing the townsfolk of their valuables and their lives is not a good look, to say the least. The potential repercussions raced through my mind each and every time I thought to pull the trigger.

That didn’t stop at the reputation system either. Resources are scarce out on the frontier, especially ammo and consumables. Gunfights never last too long, but they’re risky and costly. Using the environment against enemies or even taking a stealthier approach could be the key to coming out unscathed, though rarely does any plan go off without a hitch. Weird West let me find my own way forward and deal with those consequences as they come. A combination of environmental hazards, scattered consumables, and my personal combat capabilities informed every approach. 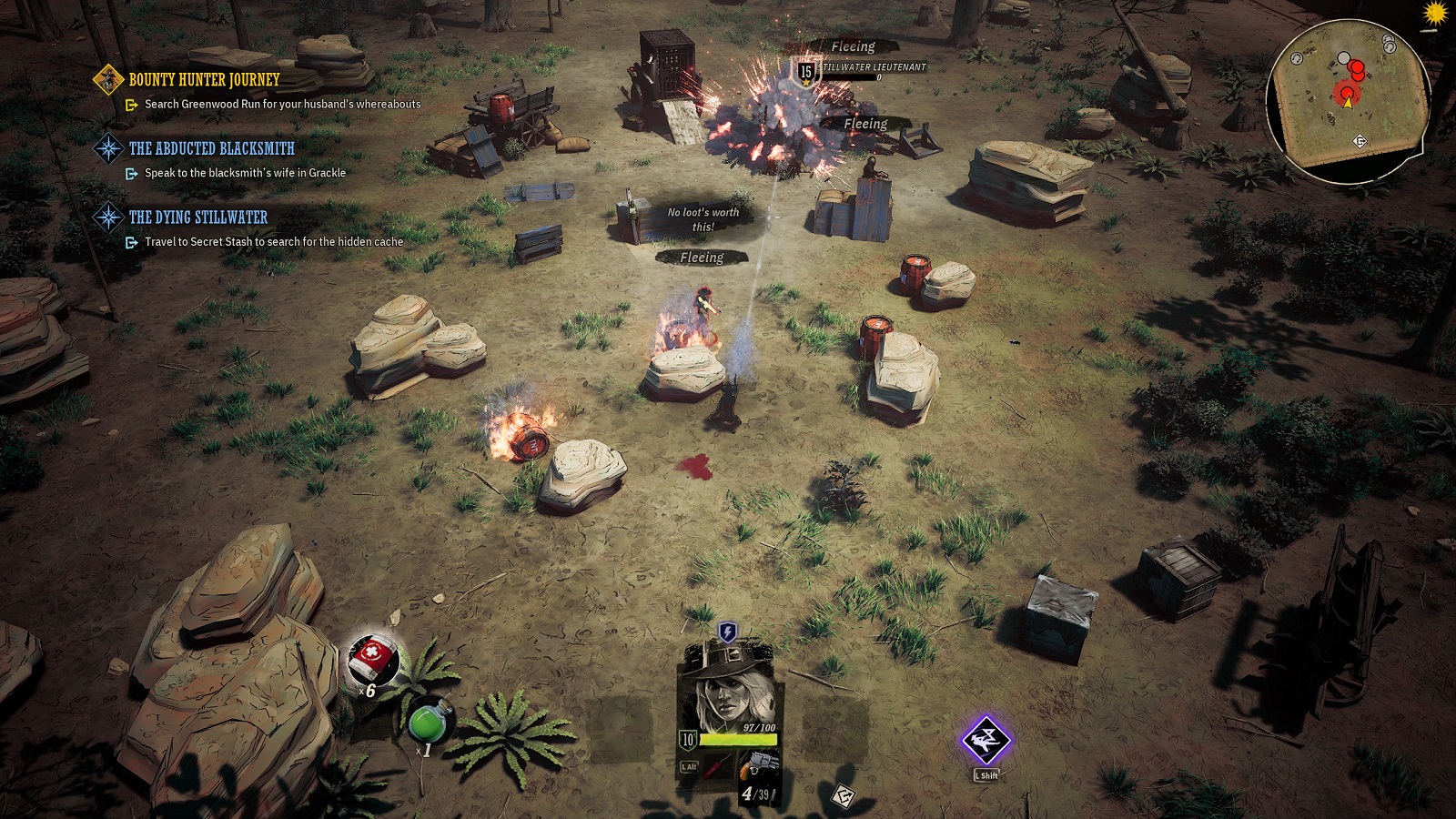 Jane’s signature revolver is joined by a selection of other choice weapons: a melee tool, shotgun, rifle, and a bow. These, on top of a spread of elemental explosives and throwables, opened the door to a host of combat options. Weird West kept the chaos coming with weapon-specific abilities and passive perks to help me build Jane into the killing machine of my choice. Scattered throughout the world are rare items that grant points for unlocking and upgrading these perks and abilities. As my kit evolved and my circumstances changed, my playstyle changed. When the cards were in my favor, it was guns blazing every encounter. When the deck was stacked against me, I had to use every last tool and skill at my disposal to get the job done.

For every minute I spent unloading rounds on my enemies and/or victims, another was spent walking and talking. Weird West’s world is dotted with towns and points of interest, which Jane and co. can travel to and from by selecting desired destinations on a map. Depending on the distance, traveling could burn a few hours of in-game time to a few days. Many missions and events are time-based, and so planning out trips becomes somewhat important. In addition, the longer the journey, the higher the likelihood that the party will stumble into one of the game’s randomized travel encounters. These range from quick conversations to fierce fights.

When I arrived at my destination, it was either time to brandish my weapons or sharpen my silver tongue. If I was in a town or settlement of some sort, I went with option two for obvious reasons, though option one was still a possibility if things went south. There are shops and crafting stations for weapons, armor, and general goods—as well as stables to purchase horses for more convenient travel. There are plenty of NPCs to interact with, ranging from mercenaries looking for a crew to ride with to quest-givers looking for an angel (or devil) to save the day. 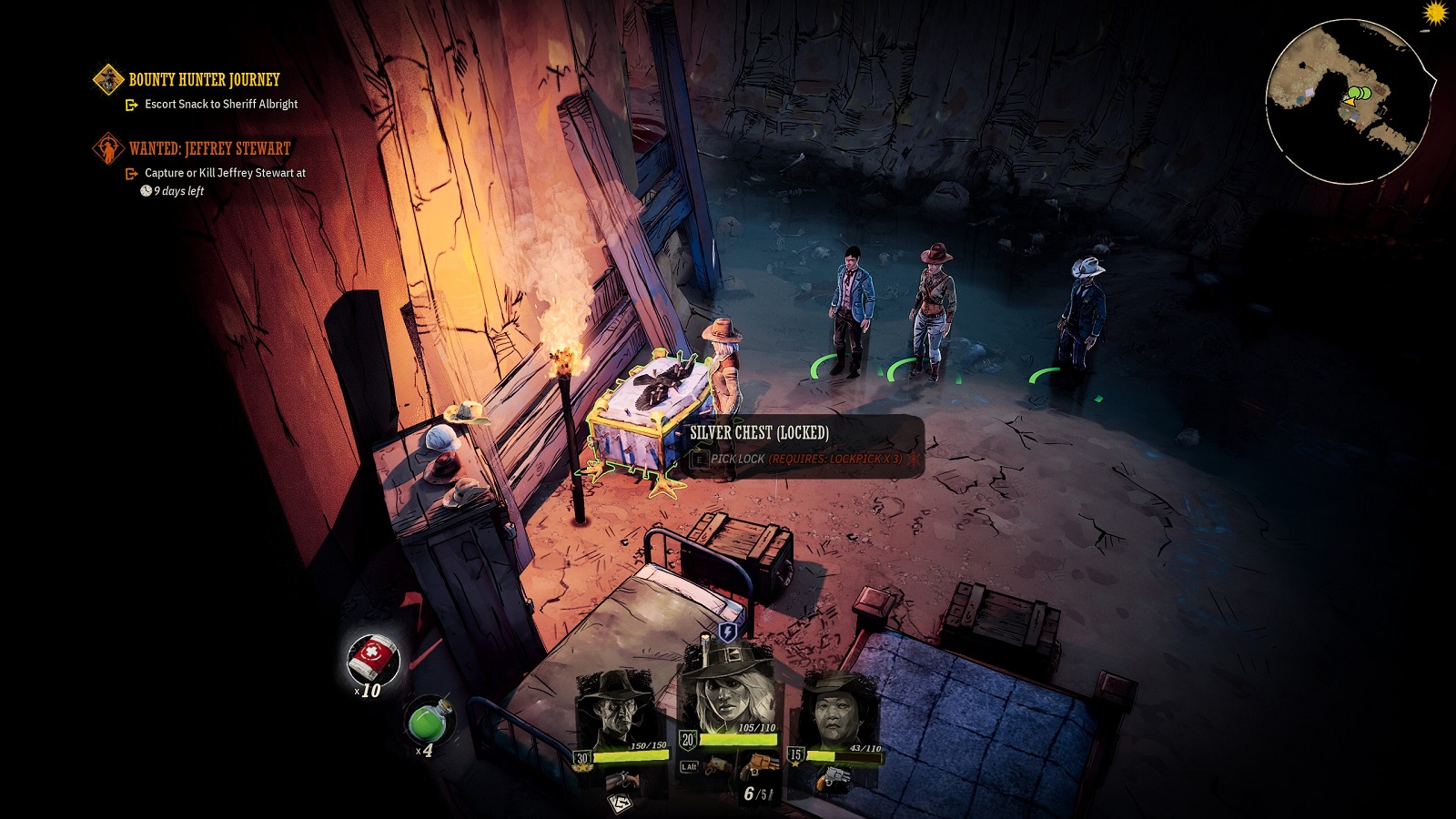 No treasure for me today.

Helping people out nets Jane reputation points and special rewards, but it’s virtually impossible to get on everyone’s good side. Still, I opted to free or heal everyone that I could and free everyone I found trapped in dungeons, basements, and the like. “Could” being the key word. Every health pack I spent on myself meant one less for someone else. Every lockpick I broke on a chest meant one less to use on a prisoner’s cage. The characters I did help rewarded me handsomely, whether financially or by popping up to save me when I had my back against the wall in a firefight.

No matter how hard I could try to retrace my steps in a fresh save, no playthrough of Weird West will ever be the same. The main plotline might stay the course, but in a game that’s just a steady stream of emergent gameplay outcomes, every bit of the experience surrounding that is beautifully unpredictable. The closer I got to my goal, the more doors the game opened up for me. Needless to say, I’m fully planning on walking through them all, and anyone even remotely interested in immersion sims needs to as well. Weird West arrives on PC, PlayStation 4, and Xbox One on January 11, 2021.