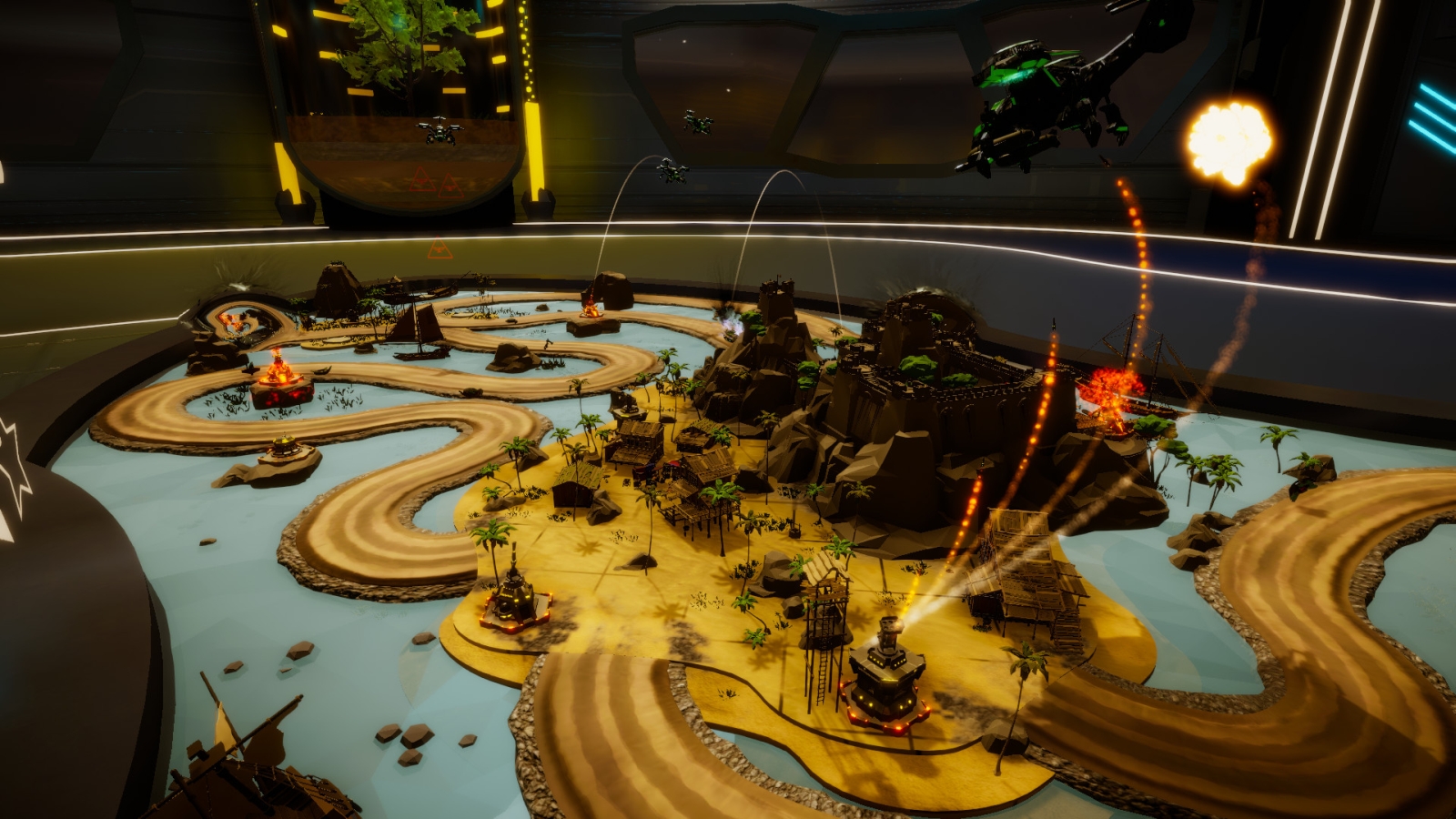 I’ve gotta be honest…I’m not really into tower defense games. It seems like there’s a glut of them on every portable device, including the Nintendo Switch, so it’s not a huge surprise that the genre has made its way to virtual reality. After having two users and the developer reach out to gauge my interest, I felt like I needed to sit up and take notice.

The gameplay takes place on what looks like a war-room board, creating an isometric forced perspective landscape. From the moment the game opens, you can see that developer ARVI LLC. has put a great deal of effort into the production values of this title. The textures are detailed, and the models hold up remarkably well up close. The only real effect I felt could have used a bit more polish was the fire and explosion effects, which felt a bit sparse, but I’m nitpicking.

In terms of gameplay and storyline, essentially there are foes that are travelling through a mystic bubble gate that are trying to traverse to the other side of your battlefield, for some reason, and you have to stop them. Ok, so it’s not going to win a Saturn award for writing, but it’s enough to get the ball rolling. As you take out the scores of enemies, you’ll rack up points which can be used to purchase turrets, which can then be used to take out more enemies. It’s a vicious cycle.

Unlike many turret defense games, there are designated defensive positions where you are allowed to place your weapons. The sticky decision then becomes whether you want to focus on ground forces, air enemies, or try to split the difference. Unlike many VR titles, The Last Day Defense plays well from a standing position or a seated one. By grabbing the glowing edge of of the table, you can manipulate the space, allowing you full access to your turret inventory without a great deal of required room-scale movement. Best of all, this makes this game perfect for newcomers as it lets them experience VR in a nausea-free environment.

The bulk of how effective you’ll be comes from the upgrades you’ll select. By the numbers, you’ll get a few different turret types (Turret, Infantry Bunker, or Mortar Tower), with a whopping 15 turret modifications. A turret, as an example, is high range, high fire rate, good vs. infantry, good vs. vehicles, can damage tanks, but at a cost of slow turn speed, low health, and an inability to damage fliers. The pop-up menu also gives a nice visual cue so you can quickly gauge whether or not it’s the right tool for the job. Each turret can upgrade three times to improve their shields, range, or damage, so you’ll have to be mindful of the types of enemies you are facing to bolster accordingly. The game isn’t just about selecting the right turret and upgrades, though, it’s also about finding the right weapon for the right position as terrain matters quite a bit. Selection can be a little wonky when the turret placements are close together, but overall it’s very intuitive and snaps together like LEGOs.

You are a virtual battle commander.

Every level has multiple paths in and out of the defensive perimeter, and you are expected to defend all of them. A turret that can fire rapidly might not be the best choice when a mortar with splash damage could handle bunched up troops. Similarly, placing a weapon that shoots on a 2D plane right next to a large embankment is unlikely to do you any favors as it will only be effective in the unobstructed arc. The game does a fantastic job of showing you the effective range of your emplacement, providing an arc that shows the reach of the weapon, as well as its ability to fire upwards or downwards to follow the terrain. Your upgrades will help plug the holes in your defense, turning a machine gun nest into a plasma gun emplacement, or extending the range on a mortar tower until it has a ridiculous amount of reach. It all comes at a tradeoff, so being mindful of your point intake and potential is important.

As something a little different, ARVI LLC. has decided to make the enemy into a true foe, letting them shoot back. This means that they are able to stun (but not destroy) your turrets, leaving a substantial gap in your defensive line for them to literally walk right through. Over time your turrets will regenerate and come back into service, but until they do, you might be in a little bit of trouble, unless you’ve covered that quadrant with a secondary emplacement.

These turrets stand between you and the enemy

If everything I’m describing sounds like bog-standard tower defense, I would understand your trepidation. Virtual reality is always hard to explain if you’ve never experienced it for yourself, but in this game the immersion is all around you. Helicopters fly around your head, as do space ships, lasers, and explosions.

The game will take roughly 6 hours to complete all nine levels of the campaign, even on the easiest of the four levels of difficulty. At that point, there are three more difficulty levels awaiting you, and they are substantially more difficult, with the last being accurately labeled “Hell”. That said, the game starts simple enough but gets challenging quickly, so don’t expect to be powering through this in a weekend.

Best of all, you don’t have to take my word for it — there’s a demo on Steam for you to take it for a spin yourself.

The Last Day Defense VR is in Early Access, works on Oculus Rift and HTC Vive, and is rapidly headed towards a final release. Stay tuned…